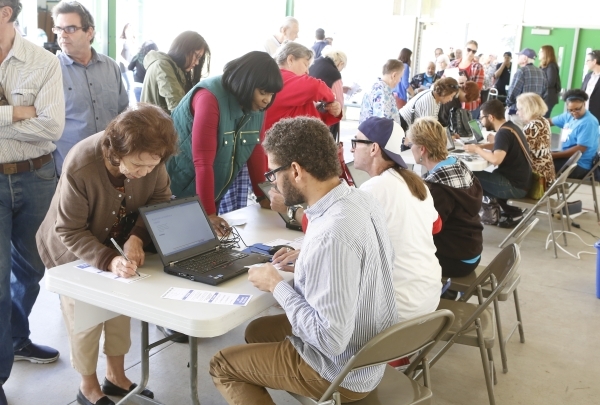 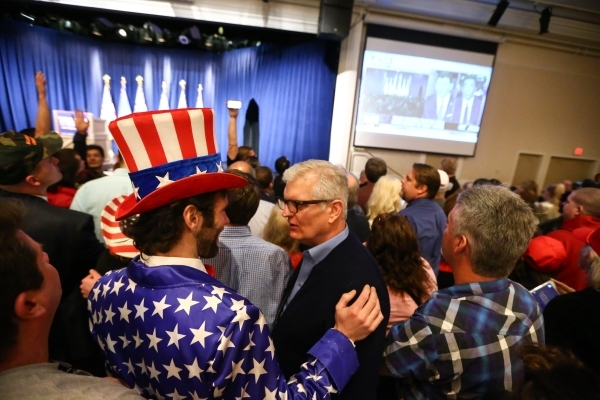 Tuesday was a good night for Donald Trump.

He had a wide margin of victory in the Republican caucus in Nevada, winning with 45.9 percent of the vote and a 22-point lead over Marco Rubio, who placed second.

On the stage at a watch party at the TI, Trump declared another win — one much more open to interpretation.

“You know what I really am happy about, because I’ve been saying for a long time,” Trump said, as he listed groups of voters supporting him. “Forty-six percent with the Hispanics. No. 1 with Hispanics. I’m really happy about that.”

Trump’s declaration as “No. 1 with Hispanics” appeared to be based on CNN entrance polls conducted at caucus sites. While the entrance polls give a snapshot of a small number of Nevada voters, they aren’t definitive proof of the overall Latino electorate’s mood. Nor do they indicate a groundswell of Latino support for Trump in Nevada.

Trump, or whoever the GOP presidential nominee is, has plenty of work ahead if he wants to make inroads into the Latino community in Nevada before the general election. Latinos turned out in force at the Democratic caucus, more than twice the number of Latinos who caucused on the Republican side.

Here’s a look at what the numbers bear out: The CNN entrance poll surveyed 1,573 people. That’s about 2 percent of the 75,216 Republican caucus participants.

Of the voters surveyed, 8 percent were Latino. As a result, Trump’s “No. 1” declaration is based on a poll that included 126 Latinos. Out of the 126 Latinos polled, 45 percent supported Trump, or about 57 actual voters. Rubio, a senator from Florida, placed second with 27 percent, while U.S. Sen. Ted Cruz of Texas had 18 percent support. Ohio Gov. John Kasich and retired neurosurgeon Ben Carson were in the single digits.

The poll also shows that a small number of Latinos in Nevada overall participated in the GOP caucus. Applying the poll’s 8 percent figure to the overall number of caucus participants results in an estimated 6,017 Latinos who caucused with Republicans in Nevada, said Joe Lenski, executive vice president of Edison Research, the company that did the polling.

The numbers show Trump, as a GOP nominee, would face a challenge getting Nevada’s Latino vote in a general election matchup against a Democrat.

Overall, an estimated 2,600 Latino Republicans who backed Trump represent just 11 percent of Latinos who caucused for either party in Nevada, said David Damore, a political science professor at the University of Nevada, Las Vegas, and a senior analyst with the Latino Decisions public opinion research firm.

Further, Nevada Latinos are far more likely to be Democrats. A Nevada poll by Latino Decisions found that 55 percent of Latinos identify as Democrats, 29 percent are independents, and 16 percent are Republicans.

There also is evidence that Trump’s comments about immigration don’t advance the party’s brand among Latinos.

The group’s polling of Latinos in Nevada and other battleground states has found that 69 percent of Latinos who participated have a very unfavorable opinion of the Republican Party following Trump’s past comments about Mexico and immigration, including that he would deport 11 million undocumented immigrants and build a wall along the border.

The comments haven’t helped Trump despite claims to the contrary.

“Immigration’s a gateway issue,” Damore said. “If you’re saying, ‘I’ll build a wall and deport your family,’ that’s the end of the conversation.”

When put into context, it’s easy for political observers to debunk the narrative that Trump is dominating the Latino vote.

“Sorry Donald, you are not #1 with Hispanics in Nevada,” Damore wrote in a piece analyzing the demographic in light of the caucus results.

In the aftermath of the Democratic caucuses on Feb. 20, the campaigns of Hillary Clinton and Bernie Sanders sparred over which candidate was favored by Latino voters.

After Sanders, a Vermont senator, lost the caucuses to Clinton and conceded, his campaign put out a statement headlined: “Sanders wins Latino Vote in Nevada.”

The Clinton campaign was quick to push back.

“I don’t typically like to swear on Twitter, but by all accounts so far this is complete and utter bull—-,” Nick Merrill, a Clinton press secretary, tweeted that day.

The Clinton campaign pointed out that precincts with a strong Latino presence favored her, a former secretary of state.

Clinton did well in at-large precincts on the Strip, where workers, many of them Latinos, caucused.

Andres Ramirez, a Democratic superdelegate who is supporting Clinton, said he was pleased that polls showed 19 percent of voters participating were Latino.

Ramirez said other issues outside immigration are important for the Latino community, including the economy, jobs, education and health care.

For the Democratic campaigns, who won the Latino vote is a debate with broader implications for Nevada. Sanders won the New Hampshire primaries, while Clinton won the Iowa caucus.

As a candidate from Vermont, Nevada also was a test of Sanders’ appeal to minority, nonwhite voters. As a result, winning the Latino vote, even while losing the overall race, would give the Sanders campaign the ability to demonstrate it appeals to a broad base.

That’s already starting: A fundraising pitch that the Sanders campaign sent supporters on Feb. 20 cited the entrance polls in Nevada and the 8-point lead with the Latino vote.