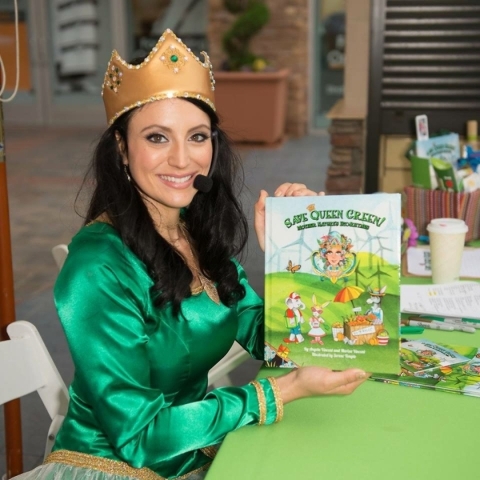 Angela Vincent holds a copy of her book, Ã¾Ã ÃºSave Queen Green! Mother Nature‘s Eco-Rhymes,Ã¾Ã Ã¹ in this undated photo as she takes on a Mother Nature-type persona. Vincent and her mother changed the lyrics to common nursery rhymes to give them eco-friendly messages aimed at a young demographic. Vincent grew up in Las Vegas, and her mother still lives here. Special to View

The Earth is being overrun with trash and pollution that clogs the skies and waters. What are humans to do?

Queen Green to the rescue, teaching youths the importance of recycling and not being wasteful. The character is highlighted in “Save Queen Green! Mother Nature’s Eco-Rhymes,” a new book that teaches youths to be kind to the planet.

The idea for the book was spawned when author Angela Vincent, 26, spent time in Europe, where recycling is a way of life.

“I was studying in Germany, and I was inspired by how progressive the country is in terms of the environment,” she said. “When I first got there, my host family showed me bins — ‘This is the bin for food’; ‘This is the one for paper’ — It’s a (way of life) there.”

The 24-page book, launched in mid-October and geared toward children through fifth grade, is filled with 12 ecology lines. It employs a clever tack, taking well-known nursery rhymes and changing their lyrics to address various ecological challenges.

For example, “Twinkle, Twinkle, Little Star” takes on a new meaning when pollution obscures the skies, and “Row, row, row your boat” is down a stream choked with trash.

Queen Green is the alter ego of Vincent, a Southern California resident and a graduate of Durango High School. She has the credentials to back up her book: Besides her bachelor’s degree from Loyola Marymount University with an emphasis in performance theater and music and a minor in political science, she also holds a certificate in Recycling and Resource Management from Golden West College in Huntington Beach, Calif., and currently serves as a recycling specialist for California’s Department of Resources Recycling and Recovery (CalRecycle).

She and her mother, Marisa Vincent, a Summerlin-area resident, came up with the book’s concept.

The effort began in 2010, though it was often being pushed aside as their day jobs took most of their time.

It wasn’t all writing. Marisa Vincent, a dance instructor, came up with simple steps that children could learn to go along with the songs. Local tattoo artist Serene Temple illustrated the book.

Angela Vincent is a vocal performer and recorded the songs that go with the book’s accompanying CDs and downloads. Putting the tunes together first meant ensuring they were public domain. The pair said it was not difficult to think of new lyrics, even though the original ones were ingrained.

“The old nursery rhymes don’t have a lot of meaning,” Marisa Vincent said.

But these do. To come up with them, the pair got into the rhythm of the song and the cadence of the syllables. Taking the concept further, Angela Vincent dons the Queen Green costume (think fairy princess) and has made appearances at Southern California events such as eco expos, farmers markets and the Children’s Water Education Festival in Irvine, Calif.

“All kids love a princess; all of them love a queen,” she said. “It’s fun to do events. … They go home singing the songs with new lyrics and don’t realize they’re learning good habits. Hopefully, they’ll turn off the water as they brush their teeth and do things like that.”

The pair plans a merchandising line of backpacks and lunch boxes to further instill the message of saving the planet. Angela Vincent said she’d eventually like to see it become a musical or a TV show for children.

“This is a great concept, teaching through rhyme and song,” Marisa Vincent said. “My generation was not raised to be environmentally aware.”