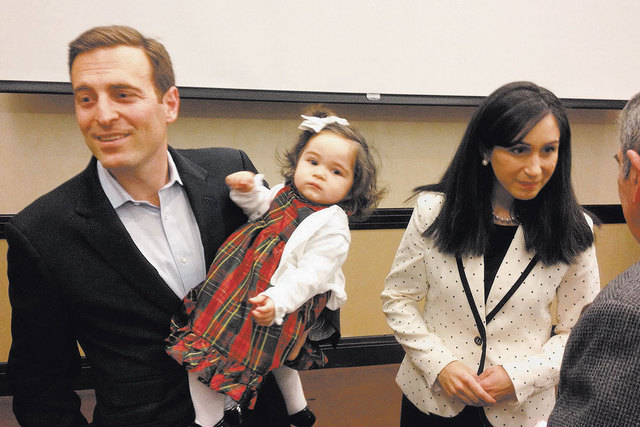 Republican candidate for Nevada attorney general Adam Laxalt is shown in January 2014 holding his daughter, Sophia. His wife, Jaime, is at right. His campaign released military documents on Friday that show he got rave performance reviews when he was a judge advocate general in the Navy. (Sean Whaley/Las Vegas Review-Journal)

Republican Adam Laxalt won rave performance reviews when he was a judge advocate general in the Navy, with superiors praising him as “intelligent, tenacious and resourceful” and an outstanding leader and mentor, according to military documents his campaign released Friday.

“DO NOT OVERLOOK THIS FANTASTIC OFFICER,” a 2009 review proclaimed in all caps after giving Laxalt top ratings of fours and fives in a half dozen areas on a scale of one to five where three is the standard officers must meet.

“His work was critical to maintenance of good order and discipline in this overseas command,” said the 2009 review when he was based in Italy at Naval Air Station Sigonella.

A 2010 review when Laxalt was teaching at the U.S. Naval Academy in Annapolis, Md., called him a “gifted teacher,” “selfless mentor,” “impressive leader,” and “team player.”

In 2007, after he volunteered for a tour of duty in Iraq where he dealt with 1,400 detainee and terrorism cases, his boss concluded, “He has excelled at this fast-paced, high-pressure environment with poise, elan and proficiency. … He has an exceptionally bright future in the JAG — assign him accordingly. I trust and have unbridled confidence in him.”

Laxalt was the No. 2 JAG officer out of 32 others he worked with in Iraq. He was “hand-selected” to become officer-in-charge, supervising six paralegals, six officers and “responsible for tracking over 35,000 detainee case files.”

Laxalt, who is running for attorney general, released the fitness report and counseling records to counter critical notes leaked from a private law firm, Lewis Roca, where he worked starting in 2011. He was given a harsh job review in fiscal year 2011-12, according to the notes from four attorneys at the firm. His legal skills were called sloppy and inadequate. And he was described as “a train wreck” who needed further training to meet basic legal standards.

The leak of the notes by Jon Ralston, a blogger and TV host of “Ralston Reports,” damaged both Laxalt’s reputation and his campaign in the Nov. 4 election against Secretary of State Ross Miller, a Democrat and former Clark County prosecutor.

On Thursday, Lewis Roca put out a statement defending Laxalt, saying the negative notes weren’t a reflection of his good work at the law firm, where he took a leave early this year to run for attorney general. The firm said it had promoted him to “of counsel,” although not to partner, and welcomed him to return to his job after the election.

The release Friday of his Navy records is another attempt to right his campaign.

Eric Herzik, a political science professor at the University of Nevada, Reno, said with more than 10 weeks left before the Nov. 4 election, Laxalt has time to repair any damage to his reputation, but his election chances have dimmed.

“He’s obviously in damage control and it’s not where you want to be in a campaign, particularly when you’re already facing a better known and better financed — and better experienced as a candidate — opponent,” Herzik said. “This is not what he needed. By the same token, there’s time to recover.”

Herzik pointed out that the leaked document was notes on Laxalt’s performance, but not the law firm’s job review itself, which could have been different in its conclusions or tenor. Laxalt’s military records, however, are official reviews, he said.

“You don’t know how complete those notes were,” Herzik said. “One guy thought he was a train wreck, but that wasn’t the conclusion of the firm. That was a selected leak of one-sided, unofficial notes. It helps him limit the damage.”

In interviews, Laxalt has appeared most proud of his work in Iraq in 2006 during wartime, for which he volunteered. His job description, according to the military report, was to provide “due process of captured insurgents in a hostile fire environment.” He excelled at the job, receiving a top score of five for “mission accomplishment.”

“His concise, objective case summaries and oral briefings were critical to mission success,” the report said. “Totally outstanding in all respects!”

In the 2009 report, Laxalt won plaudits for handling a wide array of legal cases on the base in Italy, the result of 61 investigations. They included cases involving sexual harassment, fraternization, ethics, domestic violence, online solicitation of a minor and fraud in a case that ultimately went to trial in Rota, Spain.

“Lieutenant Laxalt is a superb JAG who needs only an opportunity to shine,” it said.

In the 2010 fitness report for his last of four tours of duty, Laxalt was back in the states, teaching at the U.S. Naval Academy as an assistant law professor. He also volunteered as a special assistant U.S. attorney to handle cases on the base.

The report praised his teaching, saying he was “highly effective at presenting complex legal concepts.” It said he carried the highest teaching load in the department and midshipmen personally requested he serve as their mentors.

“His flawless military bearing and appearance set a strong example for his peers,” the report said.

The military reports, as a whole, nearly ooze with near over-the-top praise.

“Laxalt possesses unlimited potential and absolute devotion to the mission,” the 2011 report concluded.

Laxalt’s campaign manager, John Findlay, said the campaign was pleased with the contents of the military reports. But the campaign had no answer as to why it hadn’t released the documents earlier despite repeated requests by reporters and news organizations, including the Review-Journal.