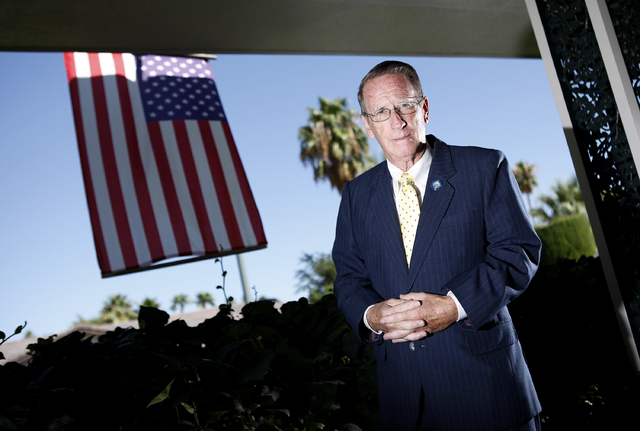 Jonathan Friedrich stands in from of his home in Las Vegas Thursday, Sept. 19, 2013. Friedrich is a commissioner on the Commission for Common-Interest Communities and Condominium Hotels. (John Locher/Las Vegas Review-Journal) 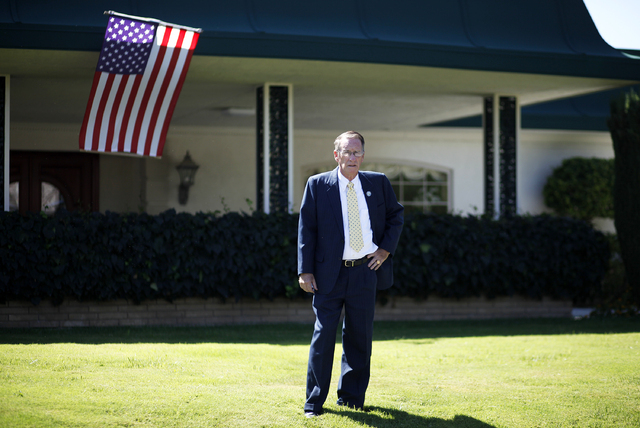 Jonathan Friedrich stands in from of his home in Las Vegas Thursday, Sept. 19, 2013. Friedrich is a commissioner on the Commission for Common-Interest Communities and Condominium Hotels. (John Locher/Las Vegas Review-Journal)

CARSON CITY — A member of the state commission charged with overseeing Nevada’s many common interest communities says the panel is unable to function properly in its current form because of inherent conflicts on the part of some of the seven members.

Jonathan Friedrich, a commissioner representing homeowners on the board, points to his recent failed effort to clarify Nevada law on what homeowners associations can collect through a super priority lien.

Friedrich wanted to amend the state administrative code to make it conform to an advisory opinion issued in December 2012 by the Real Estate Division.

Resolving the super lien dispute could help speed up the sale of foreclosed homes, bringing in new dues-paying residents to financially ailing homeowners associations. Many foreclosed properties, including those now owned by the federal government, are in limbo because the lien issue remains unresolved.

Nevada again claimed the No. 1 foreclosure rate in the nation in August.

Homeowners associations involved in the issue disagree with the advisory opinion, and liens filed by the associations continue to reflect these costs, which critics say are sometimes inflated.

Friedrich proposed amending the code at the Aug. 28 meeting of the Commission for Common-Interest Communities and Condominium Hotels to reflect the advisory opinion. Giving it the weight of law would require the homeowners associations and collection agencies to comply, he said.

Friedrich said the vote points out a flaw with the commission: That requiring professionals with potential conflicts to serve on the commission does not allow creation of good policy that will help resolve the foreclosure crisis that is plaguing many associations and home­owners, particularly in Southern Nevada.

For example, Friedrich noted that Sibley owns the Nevada Legal News, which benefits financially from the foreclosure process. Other members are also involved financially in homeowners associations, he said.

“Why didn’t the commission follow the lead of the division’s advisory opinion?” Friedrich asked. “Why not concur with the federal agencies that have expressed concern? What more do you want before bringing our regulation into compliance?”

The commission needs to be expanded to include more true homeowners’ representatives, and members need to abstain when issues they have a financial interest in come up for votes, he said.

Sibley said via an email response that the commission’s authority does not extend to clarifying legislative intent over the fees and costs issue as Friedrich proposed to do at the August meeting. There are also conflicting legal opinions on the issue, he said.

“This will ultimately be decided by the Nevada Supreme Court and further discussion or changes by our commission would not be appropriate at this time due to pending litigation,” Sibley said.

Friedrich questioned Sibley’s rationale for his no vote, citing a Nevada statute stating: “The commission shall adopt regulations establishing the amount of the fees that an association may charge pursuant to this section.”

Other members of the panel could not be reached for comment about why they voted against Friedrich’s proposal.

Sibley, a former member of the Assembly, acknowledged that similar to Nevada’s citizen Legislature, members of boards and commissions do sometimes have conflicts. “I disclose any conflict before a matter is voted on and abstain when necessary,” he said.

Friedrich’s position on the collection issue was given a boost this week when the Attorney General’s office filed a complaint in Clark County District Court against several collection agencies, accusing them of violating state law by adding collection costs to the super priority liens. The complaint seeks a ruling prohibiting the companies from continuing to engage in this practice.

Las Vegas attorney James Adams, who represents property investors and is involved in the lien issue, said Friedrich has raised a good question about the composition of the board. To serve you need to have had some experience in the industry, but that requirement opens the door for members who might have their own agendas, he said. An accountant representative, for example, might be doing work for homeowners associations. An attorney might have collection agencies as clients, Adams said.

HOW COMMISSION WAS FORMED

The commission in its current form was created by former state Sen. Mike Schneider in 2009. The seven members are appointed by the governor. The Legislature would have to act to make any changes, a time-consuming process. Schneider said that when he first worked to establish the commission in 1997, it was important to have the various professional groups represented because it was a new endeavor.

But there is no reason why the panel could not be changed now to reflect more homeowner representation, he said.

If the ombudsman’s office was moved to the oversight of the attorney general’s office, which Schneider said he originally proposed, the attorney representative on the commission could be replaced with another homeowner representative. Expanding the panel might make it too unwieldy, though, he said.

Both the commission and the ombudsman are currently under the purview of the Nevada Real Estate Division.

Friedich said he will consider pushing for changes to the makeup of the commission in the 2015 legislative session.

Schneider said he believes there have been some abuses in the filing of the super priority liens by homeowners associations. There are cases where only a few dollars in association assessments are owed but the fees total $2,000 to $3,000, he said. The fees need to be firmly capped, Schneider said.

Friedrich said his proposal to change the code is supported not only by the advisory opinion, but by a half-dozen court cases.

There are opposing legal views to Friedrich’s position, however.

On April 19, arbitrator Leonard Gang, a Las Vegas attorney, reaffirmed his decision in favor of Southern Nevada homeowners associations, ruling that the super priority liens can include the costs of collection on the debt.

Gang initially ruled in favor of the associations but agreed to reconsider after the Real Estate Division’s advisory opinion was issued. He did not ultimately change his conclusion, however.

In the meantime the liens continue to be filed with the fees and costs included, which is creating a problem for the U.S. Department of Housing and Urban Development. The agency owns many association homes due to foreclosures on FHA-insured mortgages.

In a letter sent to the commission in August 2012, Lisa Hoffman, a single-family housing specialist with HUD, asked the commission to resolve the issue.

“This results in a significant dilemma for the department, as HUD is forced to choose between either holding on to properties indefinitely or paying thousands of dollars in fees and costs that are imposed in a manner not in accordance with Nevada law,” Hoffman said.

“This dilemma also stands in the way of HUD’s mission to resell HUD-owned properties quickly in order to reduce vacancies and reinvigorate communities,” she said.