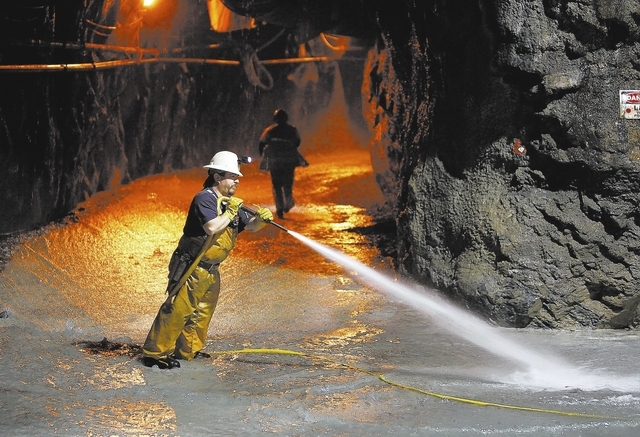 Jackie Triviso works in a tunnel roughly 400 feet below ground at Lake Mead near Las Vegas Wednesday, June. 12, 2013. The Southern Nevada Water Authority will use the tunnel to link a third intake, still under construction, to the existing intake system. (John Locher/Las Vegas Review-Journal)

The Southern Nevada Water Authority board has signed off a new tunneling project at Lake Mead that officials describe as an emergency meant to avoid an emergency.

Thursday’s unanimous vote essentially ratifies a project already underway that would extend the life of the oldest and shallowest of two intake pipes and pumping stations the community now uses to draw about 90 percent of its drinking water supply from the reservoir.

At $12 million, the job is small compared with the $817 million worth of infrastructure being built to keep water flowing from the shrinking lake. But the fact that the new work was fast-tracked early this month when authority officials took the unusual step of declaring it an emergency illustrates just how worried they are about the valley’s primary water source.

Without the work, Intake No. 1 and its pump station could become inoperable if the surface of Lake Mead drops another 40 to 45 feet. Federal forecasters expect that to happen by May or June of 2015, but it could come sooner with another abnormally dry winter on the drought-stricken Colorado River.

The loss of the Intake No. 1 pump station would leave the valley with only one working straw and one pump station at the lake, at least until the third intake is finished.

That $817 million project involves building a 20-foot-tall, 3-mile-long pipe beneath the bed of Lake Mead to draw water from one of the deepest parts of the reservoir. The work began in 2008 and is scheduled for completion next summer, but water authority officials now say the project is unlikely to be finished in 2014.

The emergency expenditure approved Thursday will be tacked on to an existing contract with Renda Pacific, a Texas-based general contractor that has spent the past three years digging a half-mile-long, $52 million tunnel to connect the existing Intake No. 2 with a third intake. The $12 million will come from existing construction funds and will not require the authority to take on more debt.

Renda Pacific is expected to spend about seven months drilling and blasting a 110-foot vertical shaft from the bottom of the Intake No. 1 pump station down to the connector tunnel the contractor now is finishing 400 feet underground near the shore of Lake Mead.

The work will require Intake No. 1 to be shut down, temporarily capped and drained, so authority officials want it done during the winter months when water demand is at its lowest. Basically, that means the project must start right away or be delayed until next year, which could be too late.

In August, the U.S. Bureau of Reclamation announced that Lake Mead would receive its smallest annual water delivery ever because of a sudden dip in Lake Powell fueled by the second-driest year since drought hit the Colorado River in 2000. The same reduced release is expected the following year, too, barring an enormously snowy winter in the mountains that feed the Colorado.

The reduced releases from Lake Powell will speed the decline of Lake Mead, which is expected to drop almost 25 feet to a record low by November 2014 and continue to fall from there.