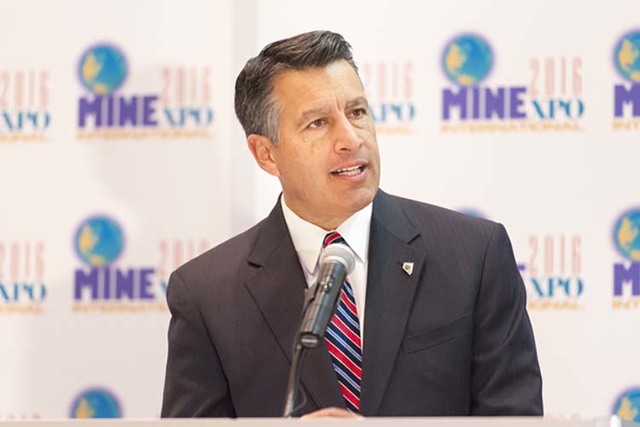 In August 2015, U.S. Rep. Joe Heck was in the early months of his Senate race and spoke at a Las Vegas Metro Chamber of Commerce breakfast.

Trump’s comments about immigrants, for example, quickly set him apart in a crowded field of GOP hopefuls. Even then, down-ballot GOP candidates like Heck were fielding questions about Trump from reporters.

“I don’t talk about Donald,” Heck said when talking to reporters at the breakfast event at Vdara more than a year ago.

Now, Republican candidates are using a playbook unlike any other. And it’s no longer an option to avoid talking about Trump, now the Republican nominee for president.

That quickly became clear in the fallout of a Washington Post report and video that revealed Trump using lewd language in a 2005 conversation about groping women and attempting to have sex with women, including one who was married.

Prominent Republicans scrambled over the weekend to criticize the billionaire businessman’s comments; many withdrew their support while touting their own conservative values. In Nevada, the list included Heck and U.S. Rep. Cresent Hardy, R-Nev. For them and other Republicans in competitive down-ballot races, Trump will be a thorn in their campaign between now and Nov. 8.

Disavowing Trump won’t stop the barrage of attacks from Democratic opponents and outside political spenders. In statements and adertisements, they’ll remind voters that GOP candidates had months to reject Trump, who already had made controversial comments about women, immigrants and a war hero, U.S. Sen. John McCain, R-Ariz.

Criticism is coming from Republicans up for election and those who aren’t on the ballot, including Nevada’s governor.

Gov. Brian Sandoval on Saturday joined the chorus of Republicans withdrawing their support of Donald Trump.

“This video exposed not just words, but now an established pattern which I find to be repulsive and unacceptable for a candidate for President of the United States,” Sandoval said in a statement. “I cannot support him as my party’s nominee.”

Lt. Gov. Mark Hutchison also weighed in, tweeting: “Bragging about groping and disrespecting women is inconsistent with fundamental conservative values. As a husband and father of three beautiful daughters, I view this kind of attitude toward women to be intolerable.”

Republican Danny Tarkanian, who is running in the 3rd Congressional District, criticized Trump’s comments but made it clear he’s still supporting Trump instead of Hillary Clinton.

“As the father of three young daughters, I found the comments disclosed yesterday disgusting and in conflict with everything I teach my children about women and family,” Tarkanian said in a statement. “We have two flawed candidates running for president, and this year there will be millions of voters like myself who will be voting for a candidate they have reservations about.

“I’ve been clear in the reasons why I support Donald Trump over Hillary Clinton. They have to do with the direction and future of our country, and those reasons haven’t changed.”

Tarkanian is facing Democratic candidate Jacky Rosen in the race for the open seat.

In a statement, Rosen criticized Tarkanian for continuing to support Trump.

“This is a defining moment,” Rosen said. “While his fellow Republicans abandon ship, my extreme opponent Danny Tarkanian now stands alone with Donald Trump. He is the last man in Nevada standing shoulder-to-shoulder with a misogynist who used dangerous and degrading language to brag about assaulting women.

“Apparently, Danny Tarkanian accepts the premise that this is just ‘locker room banter’ and not disqualifying behavior.”

Heck is in a competitive race for the open seat of retiring U.S. Senate Minority Leader Harry Reid, D-Nev. He faces Democratic candidate Catherine Cortez Masto, a former Nevada attorney general, who criticized his rejection of Trump as a politically motivated.

State Sen. Ruben Kihuen, the Democratic candidate challenging Hardy in the 4th Congressional District, called his opponent’s decision to no longer back Trump a “desperate and self-serving move.”

Democratic campaigns in Nevada, from Hillary Clinton’s and elsewhere on the ballot, are taking steps to reach out to independent female voters. And it’s happening with Clinton on the ballot as the first female nominee of a major political party.

“After this, I think women are really going to make a difference in this election,” said U.S. Rep. Dina Titus, D-Nev., a Clinton supporter. “I believe women will cross party lines. Many are going to be so offended by those comments that they can’t possibly vote for him.”

Ads are already launching. MoveOn.org Political Action, a nonprofit political group that backs Cortez Masto, started a 30-second paid digital ad in Nevada that attacks Heck for his past support of Trump. Until Saturday, Heck had said he’d support Trump as the GOP nominee.

“For months, Representative Joe Heck supported this man:” the ad says, adding a picture of Trump alongside Heck.

The ad also plays portions of the audio clip from The Washington Post report, including when Trump says: “You know I’m automatically attracted to beautiful — I just start kissing them. It’s like a magnet. … I don’t even wait. And when you’re a star, they let you do it. You can do anything.”

As for the Republicans no longer supporting Trump, Titus said, “I don’t blame them for distancing themselves, but it certainly is a little too late.”

She added, “They have to take some responsibility for the fact that they created an environment that would lead to Donald Trump.”