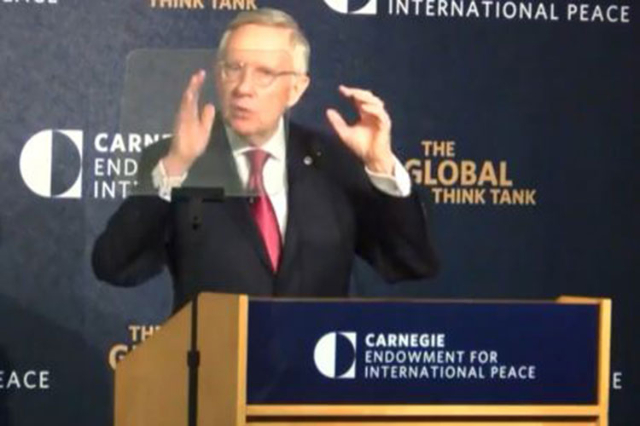 WASHINGTON — As Congress prepared to open historic debate, Sen. Harry Reid on Tuesday mounted a forceful defense of the nuclear deal reached with Iran, calling it the “last best chance” to prevent the Middle Eastern adversary from building nuclear bombs.

“Is the agreement between Iran and the international community, led by the United States, the best pathway to peace and security for America, Israel and our partners and interests? I believe the answer is unquestionably yes,” Reid said in an speech before the Carnegie Endowment for International Peace.

“Now the United States has a choice to make: We can enforce an agreement that forces Iran to walk away from any nuclear weapons program, or we can walk away from that agreement and assume responsibility for the consequences,” said Reid, the Senate Democratic leader from Nevada.

“We can take the strongest step ever toward blocking Iran from getting a nuclear bomb, or we can block this agreement and all but ensure Iran will have the fissile material it would need to make a bomb in a matter of months,” Reid said. “But we cannot have it both ways.”

The high-profile speech at a major foreign policy think tank carries out a pledge Reid made in August to “do everything in my power” to see that the agreement negotiated with Iran by the Obama administration and five world powers survives disapproval votes in Congress.

It came on the day President Barack Obama finished securing commitments from 42 Senate Democrats to vote for the agreement. The magic number would enable Obama allies to block a disapproval resolution outright and avoid a protracted veto right.

Four Democratic senators — Maria Cantwell of Washington, Gary Peters of Michigan, Ron Wyden of Oregon and Richard Blumenthal of Connecticut — announced their support on Tuesday, putting Obama over the top.

“Today I am gratified to say to my fellow Americans, our negotiating partners, and our allies around the world: this agreement will stand,” Reid said in his speech. “America will uphold its commitment and we will seize this opportunity to stop Iran from getting a nuclear weapon.”

The agreement would put in place curbs on Iran’s nuclear program and an inspection system to keep it in check. In return for Iran’s compliance, the deal would remove sanctions against the nation that had hurt its economy and served as a check on its nuclear ambitions.

Returning from a five-week summer recess, the Senate began debate Tuesday on a Republican resolution that would disapprove the deal, with votes expected in the next week.

The agreement would put in place curbs on Iran’s nuclear program and an inspection system to keep it in check. In return for Iran’s compliance, the deal would remove sanctions against the nation that had hurt its economy and served as a check on its nuclear ambitions.

Cheney said the agreement “will not prevent a nuclear-armed Iran,” and suggested only the threat of military force would halt its ambitions.

“Along with a pathway to a nuclear arsenal, President Obama’s agreement will provide Iran with funds and weapons the regime will use for the support of terror, dominance of the Middle East, and furtherance of Tehran’s efforts to destroy Israel, threaten Arab regimes, and prevent the United States from defending our allies and our interests in the Persian Gulf and beyond,” he said.

Cheney’s speech was interrupted by a protester who shouted “No more war mongering. We want peace. Dick Cheney is a war criminal.”

Reid’s 35-minute address was uneventful by comparison, apart from one point where he accidentally knocked a water glass off the podium.

For the speech, Reid debuted a set of clear eyeglasses he said occasionally would replace the shades he has worn since losing sight in his right eye from an exercise accident on New Years’s Day. After the speech, which he delivered with the aid of a teleprompter, Reid put on his sunglasses again.

The House, where Republicans hold a 58-seat majority, is expected to vote for a resolution that disapproves the pact. In the Senate, all 54 Republicans are expected to follow suit in voting thumbs down on the deal.

Four Senate Democrats — Chuck Schumer of New York, Joe Manchin of West Virginia, Robert Menendez of New Jersey and Ben Cardin of Maryland — have said they will vote against the agreement.

Besides Reid in the Nevada delegation, Republican Sen. Dean Heller and GOP Reps. Joe Heck, Mark Amodei and Cresent Hardy have indicated they will vote against the agreement. Democratic Rep. Dina Titus has not announced a position.

Reid’s address expanded on the statement he gave on Aug. 23 when he announced support for the agreement. He said it was his belief the deal will make Israel safer, and there would be no opportunity to reopen negotiations if the agreement was rejected.