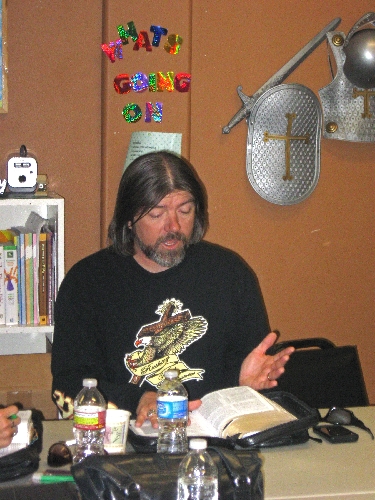 Looking at Bruce Pollock, people might not think he is a pastor. But that’s the point.

For the past few years, Pollock has been leading a church that attracts bikers and “people who might not fit in” at a traditional church.

Instead, Pollock tells people to come as they are, regardless of background, to his church, Rushing Wind Ministries inside Calvary Chapel of Henderson, 133 W. Lake Mead Parkway, Suite 100.

The “biker-friendly” ministry is connected to a larger church that originated in California but has several churches in 10 states.

Pollock became the pastor of the Las Vegas branch of Rushing Wind Ministries in 2007. His relationship with God began in 1995.

“Through a sequence of events, I realized I couldn’t do it on my own,” Pollock said. “I was standing in my own way and destroying everything I came across. I wasn’t really living life, just floating along.”

Pollock never looked back at his old lifestyle.

Before finding God, Pollock had a love of motorcycles, which started when he was a teenager and saw his neighbor’s motorcycle.

“My mother told me when I was old enough to buy one, I could,” Pollock said.

His wife, Ronda, also grew up around motorcycles. However, after working in medical rehabilitation centers, she started developing a fear of them.

“I saw so many accidents that were motorcycle-related,” Ronda said.

So she asked Pollock to get rid of his.

“It was pretty easy,” Pollock said. “It wasn’t working at that point.”

After attending another church, Ronda started realizing her fear was irrational.

“People get hurt every day in car crashes,” Ronda said. “But they get behind the wheel again.”

But mostly, Ronda really feels it was God who opened her up to the idea of having a motorcycle again.

In 2000, she told Pollock that he should look into buying one.

“Before the words even left my mouth, he was at the Harley-Davidson store,” Ronda joked.

Some how the love for God and passion for motorcycles connected around 2000 when Pollock found Bikers f or Christ Motorcycle Ministry, which uses motorcycles as a medium to reach out to others and share the Christian ministry. The prerequisite for joining, other than being a Christian, is members must have, and ride, a motorcycle.

“I could have never imagined where I’d be at today,” Pollock said.

Pollock became a licensed minister in 2005 and was ordained in 2007.

From there, Pollock started hosting church in a tattoo shop.

“The first one was in my home,” Pollock said. “We quickly realized that wasn’t going to last. Someone offered to let us host in the shop.”

The church recently switched locations to the multipurpose room of the Calvary Chapel of Henderson,

Pollock said membership has gone up and down. About 10 people attend the Sunday afternoon service.

“It’s really all word of mouth,” Pollock said. “I don’t advertise. But it’s not about the numbers. If I could reach just one person, that’s all that counts.”

The church isn’t just for bikers.

Pollock welcomes anyone who thinks they don’t fit in at a traditional church . He said he has met people who share his background who have tried church and been burned.

“They feel hurt or not accepted,” Pollock said.

This church hopes to bridge that gap and accept people for who they are, Pollock said.

Pollock lives in Arizona but visits Henderson often for church services and because his trucking company is in Las Vegas .