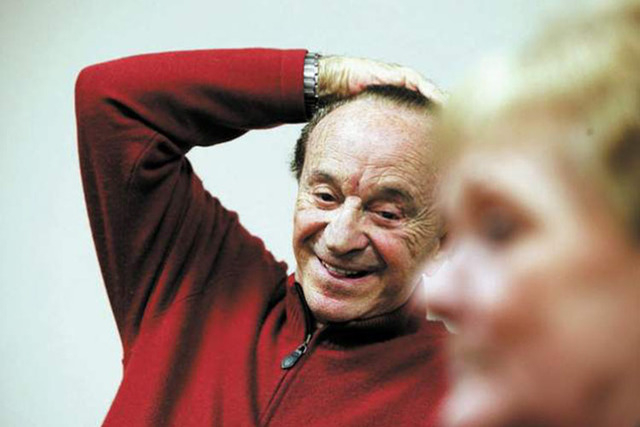 Bernie Sindler takes a break from dealing poker at the East Las Vegas Community Center on Thursday, Oct. 10, 2013. Sindler, 88, has been in Las Vegas for more than 60 years and was part owner in several casinos. He also was associated with Meyer Lansky and Bugsy Siegel. He was once one of the greatest dealers in the country and still enjoys the camaraderie of the card table.(Justin Yurkanin/Las Vegas Review-Journal)

Bernie Sindler’s voice was as distant as a whisper in a well, but he had a story to tell. And something to sell.

Sales of one kind or another has been a way of life for Bernie, who came of age in the old Las Vegas and has grown old in the new one. Sales, and a story.

In the many years I’ve known him, he’s told a million tales of his early life, acquaintances with infamous characters, years as a Vegas rounder and a percentage owner of the Silver Slipper, Frontier and Circus Circus. On occasion he’d also give hints about some of his other investment deals — perhaps not all certified kosher. And every conversation included a mention of his life’s No. 1 dream girl, his late wife Nina.

There was a time Bernie was known around every gin game at the Las Vegas Country Club and held the power of the pen at the old MGM Grand. The famous and infamous took his call.

For Bernie, those experiences these days are like a prospector’s gold dust: precious and hard to hold as time goes by and your colorful and important friends make the transition from the front pages and gossip columns to the obituaries. And so, somewhat through attrition, the 90-something Sindler became a keeper of Vegas Past, holder of the neon flame, teller of tales both verifiable and strictly on the Q.T. and just between you and me.

So I admit I was surprised to hear Bernie’s voice on the phone sounding less than ready to lead a parade. He was tired and ailing, in a local hospital, and yet still reminiscing about the Vegas he knows I never tire of hearing about. (The last time you read much about him in this column was 2013, after I found him dealing poker at a local senior center.)

“They want me to do more interviews, about the Moulin Rouge, about everything,” Bernie said. “My little book is getting some attention. Everyone who reads it loves it.”

The diminutive tome of which he speaks is called “The Bernie Sindler Story: My Life with Meyer Lansky, Bugsy Siegel, and the Mob.” (The cover of the 176-page paperback features a photo of Bernie in his prime with a yellow rose pinned to his jacket lapel.) In it he tells a few of the colorful, but safer, tales of his life. If he’d included the best of the rest, he figures he’d need a bullet-proof vest and a new identity.

If you read the book, you’ll be entertained. But you may come away feeling Bernie is telling you a story you want to hear and not the even more interesting story of his life as a night fly and knock-around guy in Miami Beach and Vegas.

In Bill Champion’s epilogue, Bernie reflects, “I’ve had to live by my wits in a world full of greed and lust. It was like living on the rim of a volcano without being seriously scorched by the eruptions.”

As always, when he called, Bernie wanted to see if he could help me. And if his book received a plug, well, that’s what friends are for. He has some stories. His memories of his Miami Beach days — when spiffs and swells he’d see in the Boom-Boom Room at the Fontainebleau one week would turn up in the Copa Room at the Sands the next week — told the story of Las Vegas in its golden age.

Sindler says he was sent West at the request of Lansky, the legendary mob idea man, and rubbed elbows with the most infamous characters in our history. What’s verifiable is his long history as a percentage owner of multiple casinos, which come to think of it did have their share of hoodlum influence.

He has an endless scrapbook of memories from the iconic places of Vegas past, and he’s part of a rapidly vanishing group of eyewitnesses to the evolution of this amazing boom town.

And in the end, when the gold dust mixes with stardust, we are left with our memories.