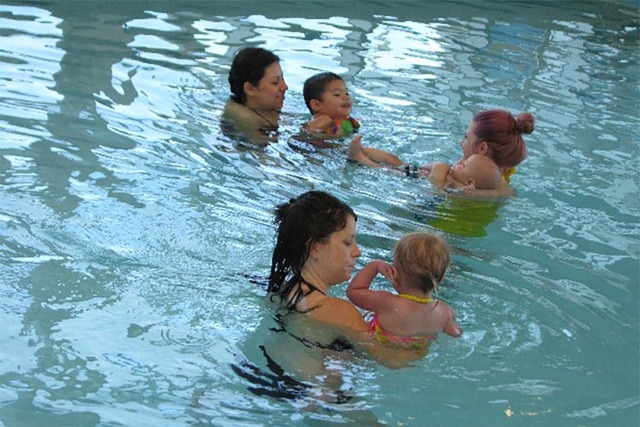 Mothers and their children attend a parent/child swim class April 25 at the Hollywood Aquatics Center, 1550 S. Hollywood Blvd. Clockwise from the top are Gisselle Jacques and her son Amir, Shaina Peyton and her son River Peyton-Lilly and Stephanie Cressman and her daughter Kaylan. 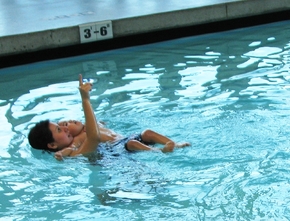 The sun had barely peeked over Frenchman Mountain. Three moms with children 2 or younger were in the pool at the Hollywood Aquatics Center following the instructions of Ashley Smyth as she led them in a modified rendition of “If You’re Happy and You Know It.”

“If you’re happy and you know it, blow some bubbles,” Smyth and the mothers sang, punctuated by all seven thrusting their faces into the water and doing just that. The babies, far from being frightened, were delighted, all smiles and excitement.

“I love my son,” said Shaina Peyton, mother of 7-month-old River Peyton-Lilly. “He’s amazing. He only made my life better. I’m honestly really happy with it. He’s such a good kid.”

The aquatics center at 1550 S. Hollywood Blvd. has three-week parent/child swim classes at 8 a.m. Tuesdays and Thursdays. For Stephanie Cressman, mother of 18-month-old Kaylan, it’s a chance not only to get out of the house but also to spend some special time with her young one.

“Being a mom is a little harder than people tell you,” Cressman said. “But it’s exciting having kids and watching them grow. I feel it’s my purpose.”

Cressman’s husband has to travel a lot for work, so she finds it a challenge just to get out of the house, and she suspects that it will become more the case when she has her second child three months from now.

“The second I was pregnant I knew things had changed and I was a mom now,” Cressman said. “There are so many things you can’t do anymore. I spent a lot more time at home doing baby things. She’s learning new things every day. It’s wonderful.”

Gisselle Jacques, mother of 2-year-old Amir, said her entire attitude about children changed when she had her own.

“I didn’t really like kids that much until Amir came,” Jacques said. “Now I love all kids.”

Peyton had a head start on motherhood because she works as a nanny while taking classes toward a special education degree, but she finds some aspects of it challenging.

“His father and I aren’t together anymore,” she said. “His father helps out, but I still go from being up with River at night to work and back to River again. I don’t really get breaks.”

Ginger Sanchez, who recently became the co-owner and operator of Bee Creative Ceramics, 3640 E. Sunset Road, often worked three jobs to make ends meet when she was raising her two boys, now 18 and 20.

“Being a single mom was a challenge,” Sanchez said. “It was hard to balance work and raise them the best you can. You just do the best you can with what you’ve got to work with.”

Despite the difficulties, Sanchez remembers the best parts of motherhood, which she said included unconditional love and her children’s innocent laughter.

“So much of it is sweet and wonderful,” Sanchez said, adding with a laugh, “Up until they get in their teens, then it becomes really really challenging again.”

Even though her children still live with her, she calls them frequently every day.

“They have good hearts,” Sanchez said. “My oldest son works at a tavern, and the other one is still finding his way.”

Colleen McGraw, on the staff at the Cora Coleman Senior Center, 2100 Bonnie Lane, also spent many years as a single mother.

“My children are two years and two days apart,” McGraw said. “They were 1 and 3 when I got divorced.”

McGraw had always planned to have children and to be a young mother. But she said having children made her grow up quickly and become responsible.

“When you don’t have kids, you think you’ll never be able to take care of somebody else,” she said. “Then you do and all just happens naturally.”

“Everything was a joy,” McGraw said. “You watch them grow and learn the things you taught them, and then they surprise you by learning things you haven’t taught them.”

Eventually she remarried a man with three children. She’s now a grandmother and is passing her parenting experience along to her children.

“I told my daughter to be kind about her sons’ father,” McGraw said. “They’re not together anymore, and I told her not to say anything bad about him. He’s still my grandson’s father.”

Her new husband worked for eight years as an engineer for Hughes Aircraft in Saudi Arabia, which gave McGraw an international perspective on motherhood.

“What I learned over there is that they raise their kids the way we raise our kids,” McGraw said. “They have the same problems with their kids and teenagers we do, even in a restrictive country like that. We all have the same challenges.”

Most of her children are old enough that they can see how they acted in their difficult teenage years.

“Most of them have come back to me and told me they were really sorry about the things they did when they were teenagers,” McGraw said. “But that’s just what you do when you’re a teenager.”

When all is said and done, McGraw stands by her decision to become a mother.