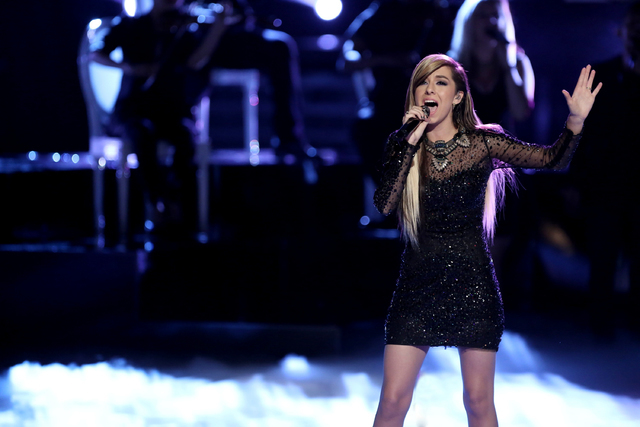 Some Las Vegas singers are being escorted off property after gigs as a security measure following the shooting death of “The Voice” singer Christina Grimmie.

“At this point, I’m not allowed to walk to my car at night without a manager or somebody escorting me,” Station Casinos singer Cali Tucker said Friday.

Grimmie, 22, was shot and killed in front of her brother by a fan during post-show autograph signings in Orlando, Florida, a week ago.

“This is kind of like the 9/11 for entertainers,” Tucker said.

“I’m so proud to be a part of the Station Casinos family, because they have promised us entertainers that they’re amping up security, and they’re gonna figure out a way to make us feel safer and more protected.”

Tucker competed against Grimmie on “The Voice” in 2014.

“I’m just tore up about it. The more I think about it, I just start bawling my eyes out,” Tucker said.

“Of all the wonderful people to have this happen to. Also, she was one of the best singers I’ve ever heard.”

“You could not not love her.”

“Voice” contestants held worship services on Sundays, and Grimmie was so talented and charismatic, “Christina was the choir director, pretty much,” said Tucker, who performs at Red Rock Resort (Wednesdays through Saturdays) and Green Valley Ranch (Sundays and Mondays).

“When she walked in the room, people would whisper, ‘Oh my god, that’s the girl that has 3 million YouTube followers,’” Tucker recalled.

“American Idol” winner Phillip Phillips hung out with Grimmie for a few days when she interviewed “Idol” contestants for YouTube.

“She wasn’t shy. She would talk to you, and she would make you talk, in a good way,” said Phillips, who will perform Saturday at Mandalay Bay Beach with Matt Nathanson.

“She was just a sweetheart, and a very nice person, an amazing singer and songwriter.”

“I can’t really get over it. No one deserves that,” he added.

The shooting death convinced him and other artists to make security stricter against potential shooting situations, he said.

“There’s just crazy people out there, man, and you just never know what’s going to happen,” he said.

He thinks his own fans are “all good.”

“They’re cool people, and I love ’em all,” said Phillips, who still gets physical mail from fans, as well as cakes at shows.

And that’s how singers contemplate protection while mourning the loss of a bright light.

“I was talking to my mom about it,” Tucker said. “She said, ‘God must have really needed her.’

“I’m just a mess about the whole thing.”

“America’s Got Talent” has three Las Vegas contestants headed to its stage on Tuesday, named “Deadly Games,” Axel Perez and “the Baron of the Universe.”

A week ago, I paraphrased artist John Van Hamersveld saying he’s earned more money from litigation filed to protect his “Endless Summer” movie poster than from the poster royalties.

He did say that, but he meant the movie rights owner does all the litigating and earning, not him.

I got beat fair and square in a pizza-making competition Wednesday at Trevi in the Forum Shops at Caesars.

Fisher made a yummy pesto pizza (cooked to honor Hope for Prisoners). I tried a fried eggplant pizza in a bid to benefit Community Cat Coalition of Clark County.

Fisher shot the friendly rivalry for Facebook Live, divulging to 2,000 viewers she waited tables at a truck stop as a teen and said she has other life stories to prove there’s more to Beth Fisher than we know.