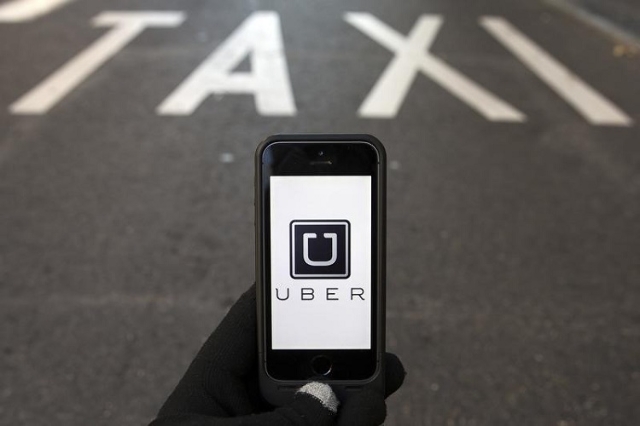 The logo of car-sharing service app Uber on a smartphone over a reserved lane for taxis in a street is seen in this photo illustration taken in Madrid on December 10, 2014. REUTERS/Sergio Perez

Ottawa police are conducting an investigation after a video of a taxi driver threatening an Uber driver was brought to their attention.

The video, which appears to have been filmed from inside the Uber vehicle, shows the taxi driver yelling at the Uber car. The taxi driver is seen and heard shouting at the driver of the car, “If I see you again, you’re dead meat. Go follow the law and get a real job. I’m not joking.”

From there, the taxi driver puts his head inside the driver’s side window of the Uber car and begins shouting at the passenger in the backseat. After telling him “no one is talking to you,” he then encourages the passenger to come out of the vehicle and talk to him “like a man.”

He continues the tirade by opening the backseat car door and repeatedly tells the passenger to “get out.”

When the passenger doesn’t get out of the vehicle, the taxi driver calls him a “cheapskate” and tells him to “take a real taxi.” Although the Ottawa police department have launched an investigation into the video, Sgt. Fred St. Pierre told CBC News, “we don’t have a complaint.”

After the video went viral on social media, the name of the suspected taxi driver was shared by viewers. However, Ottawa police have not formally identified anyone involved in the video.

In a written statement to Radio-Canada, Uber Canada called for an end to intimidation tactics in favor of constructive dialogue.