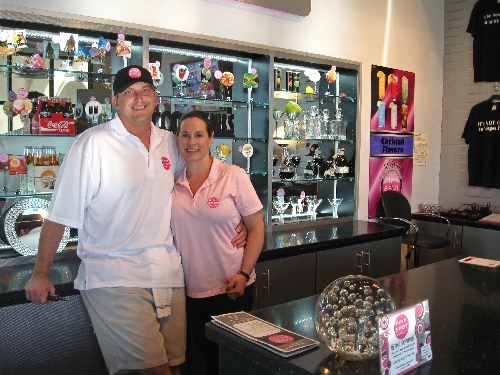 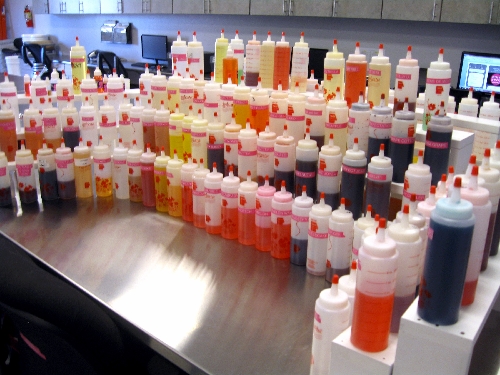 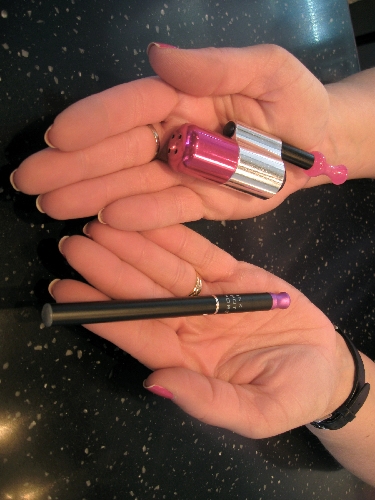 The couple’s key product is the electronic cigarettes , or e-cigarettes , which produce an inhaled water vapor and simulates smoking tobacco. A liquid containing some or no nicotine is dispensed in the battery-operated cigarette and vaporized akin to a nebulizer or humidifier.

The Elletsons have sold the product wholesale and online for about two years, but its popularity sparked the couple to open a brick-and-mortar location, Pink Spot Vapors , 6485 N. Decatur Blvd., Suite 180 , about two months ago.

Their customers range from tobacco users who want to smoke lawfully – Nevada restricts smoking in various establishments – or who want to curb or quit the habit, said Penn Elletson .

“We just stumbled into this industry and it’s gone crazy,” he said. “The reason this is so successful worldwide (is) people try to quit with chewing gum and the patch on the arm, but that’s not just what your body is addicted to. It wants the hand-to-mouth (sensation), the oral fixation and the vapor sensation and the social aspect.”

“It’s water vapor in and water out,” Elletson said. “You get the vapor production without the harmful effects.”

Elletson, a former smoker , was introduced to imported e-cigarettes a few years ago when the offered flavors were standard: chocolate, cherry and mint. He and his wife started mixing their own gourmet flavors, such as raspberry mojito and pi ña colada , with varying levels of nicotine, and their audience loved it, Elletson said.

The cloudburst expanded, and the couple decided to open a storefront and mix their product in a commercial-grade kitchen. Regulation on e-cigarettes is hazy, Elletson said.

The U.S. Food and Drug Administration acknowledges that e-cigarettes may contain ingredients that are known toxins but classifies the device as an unapproved new drug because of lack of research, according to the U.S. Department of Agriculture .

Clinical studies regarding the safety and efficacy of e-cigarettes have not been submitted to the FDA. Public health experts and lawmakers met in 2009 to discuss potential health risks and sample 18 of the various flavored, nicotine and no-nicotine cartridges offered by two leading brands. The resulting FDA analysis found that the product contained detectable levels of known carcinogens and toxic chemicals to which users could potentially be exposed but didn’t draw a conclusion .

Sandi Elletson said local dentists have begun endorsing their product because it doesn’t cause stained teeth or gum disease like their analog counterpart.

The Elletsons say they self-regulate operations and use pharmaceutical-grade nicotine and USDA-approved ingredients in their vapor flavors. Pink Spot Vapors’ kitchen is in compliance with food-service sanitation regulations, Elletson said.

There is also a feature on the company’s website that requires online users to be 18 or older.

“Hopefully, when the FDA comes down (on regulation), we’ll be setting the standard,” he said.

Pink Spot Vapors, named for a signature drink Elletson created, has e-cigarette hardware and accessories and a variety of flavors, such as Dutch apple pie, key lime pie, cherry limeaid and more. The cocktails are called e-juice. The vapor taste and smell are the same.

Elletson said he or one of his eight employees tries to speak with each customer and understand his e-cigarette needs and wants.

For instance, the vapor for a smoker used to inhaling a pack of Marlboro Reds may contain about 24 milligrams of nicotine , while a casual social smoker’s content could hover around 6 milligrams, Elletson said.

Some users don’t request nicotine and puff for flavor, he said.

Sandi Elletson “vapes” with no nicotine but enjoys the watermelon wave flavor, she said. Doses can be lowered and adjusted as smokers wean, she said.