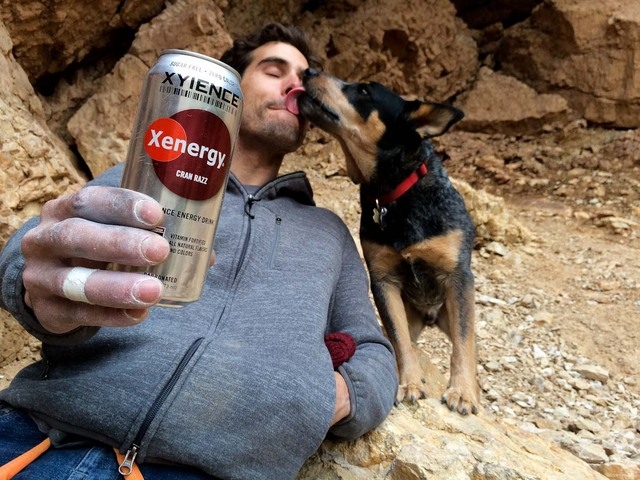 Joe Kinder takes a break from rock climbing in an area called Cathedral in Southern Utah to get a kiss from his dog, Finn, in this undated photo. He holds a drink from his new sponsor, Xyience, a local sports energy drink company that tapped Kinder to be the first face for its new ambassador program for athletes involved in rock climbing, running, bicycling and paddleboarding. (James Lucas/Special to View)

It takes a certain kind of person to cling to a cliff using only his fingertips.

Joe Kinder, 33, has been making a name for himself in rock climbing for 15 years. He is known for his impressive roster of first ascents and route development, as well as his motto: “Always psyched.”

“What I really love about climbing is, it’s one of the most fun activities I can do that (incorporates) problem solving and challenge, goals,” he said. “(And) it’s something that brings you to places all over the world.”

Kinder has completed more than 160 routes in the toughest grade, 5.14. He’s been featured in numerous climbing films and national outdoor publications such as Climbing and Rock & Ice. Using his artistic leanings, he also has become a filmmaker, a photographer and a painter. He majored in painting at the Maine College of Art in Portland, Maine, prior to becoming a professional athlete.

Now he has another item for his resume: Xyience spokesman. The local sports energy drink company is better known for signing UFC and mixed martial arts fighters.

“Joe’s boundless energy is the perfect match for the Xyience Xenergy brand,” said Aimee Wenske, the company’s brand and social media manager. “His accomplishments in rock climbing are a testament to a lifestyle that’s centered on health and fitness, and his personal motto of ‘Always psyched’ communicates our brand philosophy, ‘Power to Win.’ ”

Kinder grew up in Manchester, N.H. On a family reunion trip to Colorado when he was about 13, his parents gave him and his older sister Becky a choice of activities. Becky chose whitewater rafting. He chose rock climbing, took his first lessons and learned he was good at it — so good that the instructors gave him more challenging routes than others in the class.

Back in New Hampshire, he began tackling local cliffs. When he wasn’t outside challenging mountains, he was reading magazines or watching movies about rock climbing.

“I was kind of obsessed about it,” he said.

He became so good that, while still in high school, he got his first local sponsors. Kinder took a trip to Las Vegas at 18, not to party but to climb. He tackled Mount Charleston and hasn’t stopped since.

“I was beginning to turn heads and become noticed,” he said. “A lot of the time, it was me and my three good friends. We were taking the climbing thing to the next step, doing the routes quicker and better than anyone else out there.”

“We were these young kids and were really psyched and had no hindrances about what was what. We were kind of naive in our perspectives,” Kinder said.

In 2006, while climbing in Mesquite, Kinder’s dad, Ron, met him and took him to dinner for a heart-to-heart. He suggested his son could make a living at the sport.

Now a Summerlin resident, Kinder uses Las Vegas as a launch point for climbing across the region. He said the weather and dryness are the big draws for moving here. Las Vegas may be his base, but his sport takes him around the world.

“Traveling as a rock climber is a lot different than traveling as a tourist,” he said. “You get to go into the nitty-gritty places of the world, into these places where you would never normally go.”

Catalonia in northeastern Spain is one of his favorite places to rock climb. South Africa and its unique culture are another draw. It offers the opportunity to climb with baboons and giraffes nearby. He said he also enjoys Europe.

“You just travel around aimlessly,” Kinder said. “Half the time, you don’t even know where you are. I think that’s one of the enjoyments about traveling as a climber. You have these little pinpoint spots where you want to go, and you just travel to all these random places … they often (result in) funny stories to tell your friends.”

The Power to Win Team is a grass-roots brand ambassador program for athletes and fitness influencers in sports such as climbing, running, bicycling, triathlon and paddleboarding. Kinder’s contract will have him creating videos on the Power to Win ideology.

“As our first professional outdoor athlete, Joe will help us communicate our brand message and continue to build those meaningful connections developed with our Power to Win campaign,” said John Lennon, Xyience president.

Kinder said he plans to continue rock climbing for a long time. He keeps fans updated on his blog, joekindkid.com.

“Hopefully, this inspires people to go out and reach a goal, to find their route,” he said.