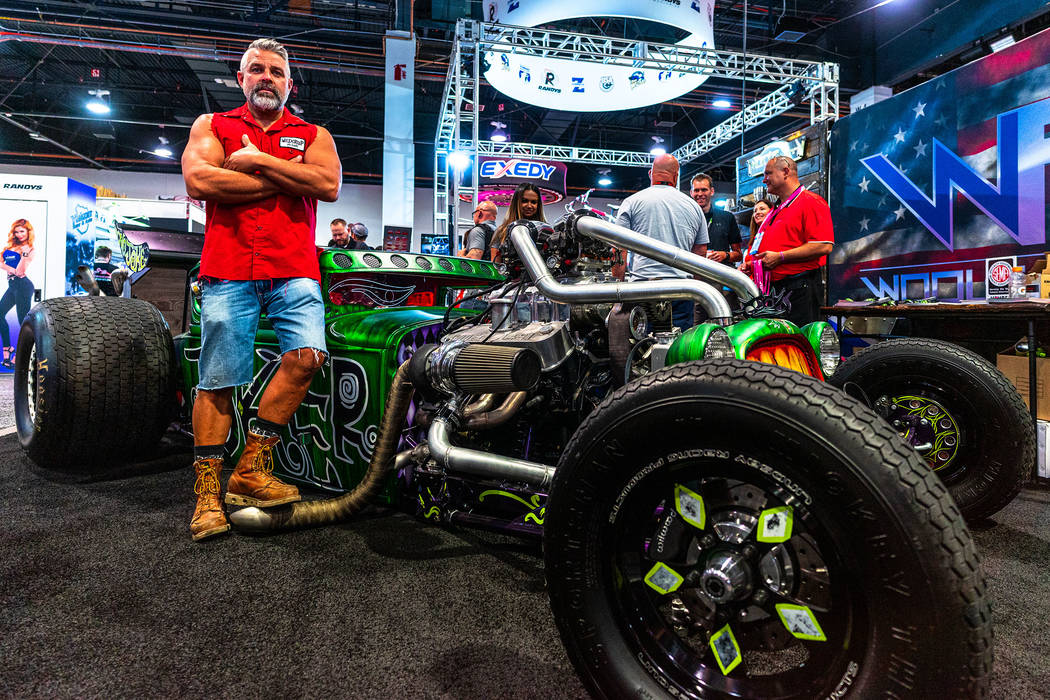 Native Las Vegan Steve Darnell would not miss a SEMA gathering. The owner of Welder Up, he has his own unique equipment such as the Joker. (Mike Henle) 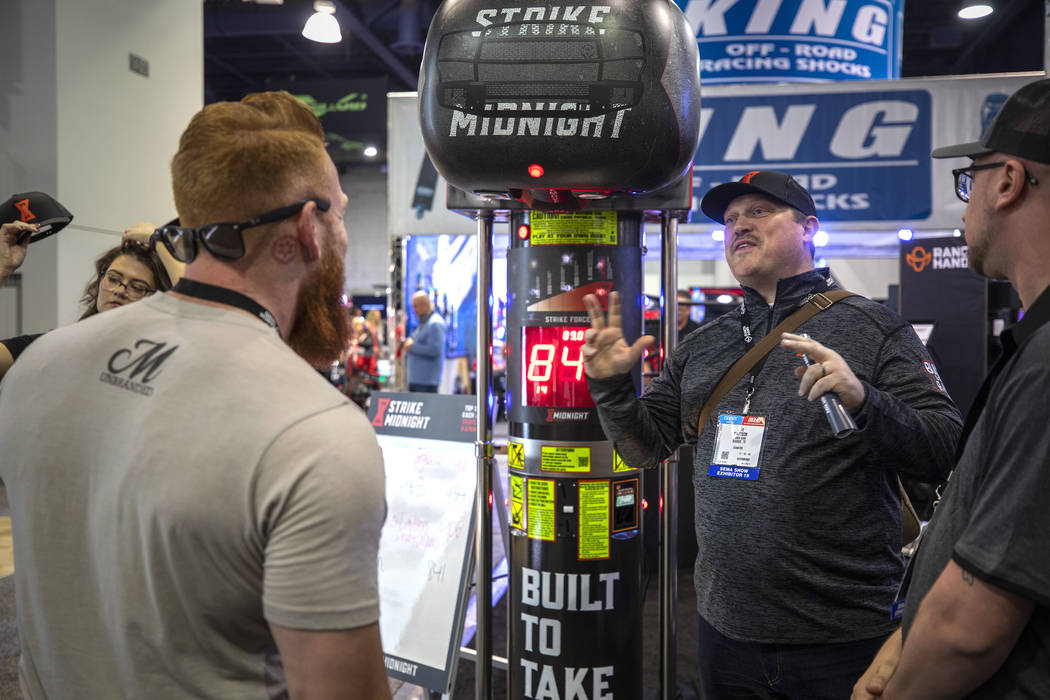 Marketing expert Joe Mattson of Bivalve Agency in Texas is shown with a 200-pound ball that released every hour on the hour at SEMA to show on-lookers to promote the strength of the Ranch Hand Midnight bumper. (Bivalve Agency)

Welder Up’s Steve Darnell is a busy native Las Vegan. He is passionate about classic cars and has been rebuilding and fine-tuning vehicles for many years.

As busy as his company is now, Darnell wouldn’t miss a Specialty Equipment Market Association show. Thousands of auto enthusiasts converge on the Las Vegas Convention Center every year for SEMA, which ends today.

Darnell, whose business is situated at 3160 S. Highland Drive, looks forward to every SEMA gathering and is among the first to arrive at the Las Vegas Convention Center and the last to leave when the show is packing up and leaving.

While Darnell only had to travel a few miles to visit SEMA, many conventiongoers traveled from as far away as Japan and Germany. The gathering is open to industry representatives rather than consumers.

SEMA debuted in Los Angeles in 1967 and has been the go-to automobile source ever since. The show moved to Las Vegas in 1977.

Former SEMA president Leo Kagan, who is now more than 100 years of age, brought SEMA to Las Vegas because Anaheim had too much rain, and it didn’t have enough convention space. Kagan’s moving the show to Las Vegas in 1977 upset some Southern Californians and delighted the Las Vegas Convention and Visitors Authority.

The 2019 SEMA show certainly hasn’t lost its pizazz as one of Las Vegas’ largest conventions, second only to CES. SEMA is like a gearhead’s county fair jam-packed with high-energy machines that literally rumble the earth.

”It’s the greatest show on Earth,” said Darnell, whose company works on everything from slick classic cars to a tractor that was formerly used for road construction.

In fact, one of the vehicles Darnell worked on was a ’55 Chevrolet allegedly owned by Charles Manson, though the information has not been confirmed. Manson ran from the law and finally ended up in Death Valley, where the ’55 Chevrolet was left to rot before Darnell chased it down and brought it to the Welder Up shop for an automotive revival.

Key to the SEMA show is marketing.

Among the many exhibitors that spend thousands for displays at SEMA was Shiner, Texas-based Ranch Hand, a truck accessory company that creates customized grill guards, bumpers and steps to give trucks a distinguishing edge. One recent addition to its line is a new metal finish to all of these customizations called “Midnight.”

“Last year’s Impact Experience allowed us to show off the strength of our product,” said Director of Marketing Larry Murray. “Ranch Hand will be literally ‘striking Midnight’ with a huge 200-pound sledgehammer throughout the week at SEMA. Ranch Hand’s industry-leading, American-made bumpers and grill guards are famously built to take a hit.”

Murray worked with marketing expert Joe Mattson of Bivalve Agency in Texas. The agency executive orchestrated the idea of a 200-pound ball being released every hour on the hour to show onlookers that the Ranch Hand Midnight bumper was a step above everyone else’s bumper protection package.