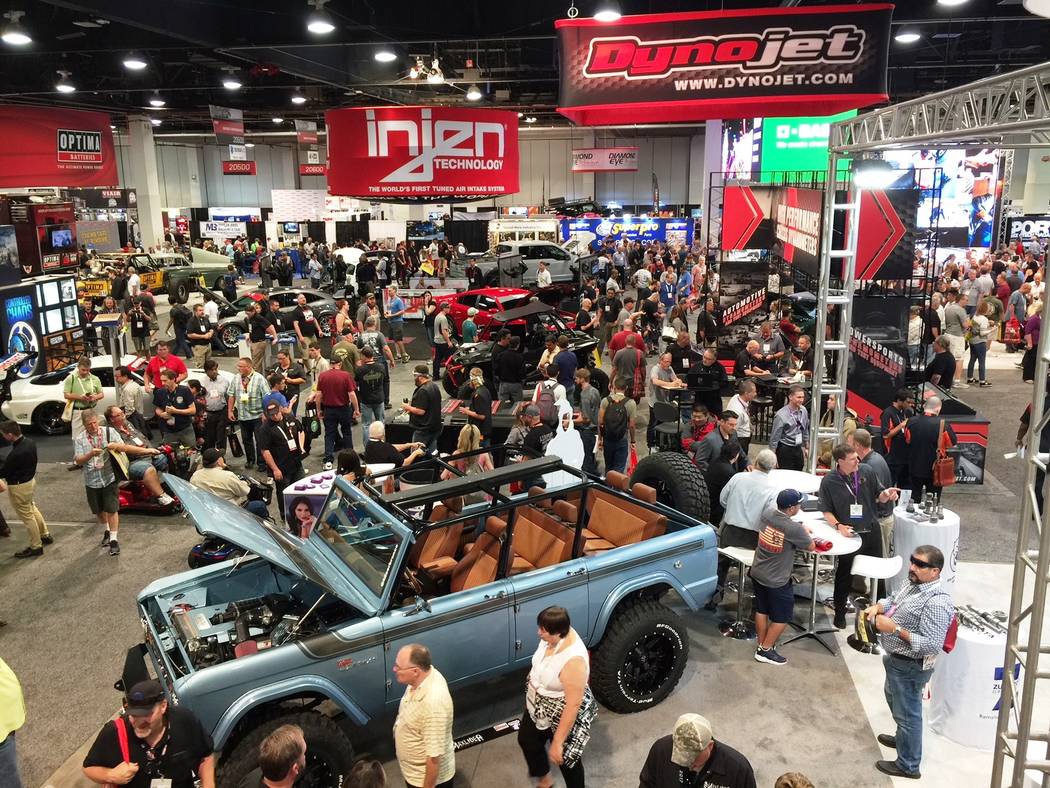 Mike Henle As usual, SEMA drew incredible crowds at each of its venues at the Las Vegas Convention Center.

Another Specialty Equipment Market Association and Automotive Aftermarket Products Expo show is in the books, and the high-horsepower annual gathering concluded a four-day run Oct. 31-Nov. 3 in Las Vegas with very impressive numbers.

Presented at the Las Vegas Convention Center, Sands Expo and Westgate, the gathering produced 118,000 room nights for an increase of 16.51 percent over the last three years, with 25 percent of the 165,000 registrants journeying to Las Vegas from other countries.

Second in size to the annual Consumer Electronics Show presented in January, SEMA was again a gear head’s delight with every conceivable engine-powered vehicle ranging from classic cars to new cars and motorcycles.

The show also attracted more than 3,000 members of the media and generated an economic impact of $315.5 million.

The show consumed every possible inch of convention space, whether it encompassed a display or an exhibition of new or classic vehicles.

One area in front of the Las Vegas Convention Center was the site of some very loud and earth-rumbling vehicles competing in a form of drifting. While enthusiasts hung on for the ride of their lives in the passenger seat, the vehicles with throaty exhaust systems rumbled the earth and undoubtedly rattled the windows of surrounding hotel rooms.

It wasn’t hard to recognize that attendees of SEMA enjoy Las Vegas and the energy the city generates. The dream child of Leo Kagan, who turns 101 on Nov. 17, and members of the Las Vegas Convention and Visitors Authority, the show moved to Las Vegas from its old home in Anaheim, California, in 1977.

“There was no room in Anaheim,” Kagan explained. “It wasn’t big enough, and I realized that people were having booths in the hallways. Someone told me to host it outside, and I told him we would have problems in the rain.”

However, not everyone was happy with the move to Las Vegas.

“I took a lot of heat for the move,” Kagan said. “I got called all kinds of names, and we added an industry newspaper that said I’d be the ruin of SEMA. It took several years before they saw that the opportunities in Las Vegas were endless. A lot of them were against the idea because there was a fear that the people would gamble and not go to the SEMA show.

“When we moved over to Las Vegas, we had about 400 booths, and we now have about 3,000 booths. It’s going to get bigger, too. There is an endless supply of companies that come to SEMA.”

Gary Zeff, of Collingswood, New Jersey, said the overall attendance between SEMA and AAPEX is around 165,000.

“That’s the highest I have ever seen it,” Zeff said, “and I go to both shows.”

“I have been coming to SEMA for 10 years,” said Kazakov, a 38-year-old Russian-born businessman. “I was sending product to Russia, but the economy there went flat about three years ago. We now manufacture wide body kits in Moscow, Russia, and sell primarily in the U.S., which is 80 percent of our business.

“Mine is essentially the Cinderella story. It’s all about getting out and never giving up. I had been working in the computer business before deciding to follow my passion and getting involved in the automotive industry.

“SEMA has been very good for us.”

“They were doing it for all the right reasons, because they wanted to build a marketplace for the hot rod industry,” he said. “While there were shows in the space, they were regional shows. The hope was to create a national market, and they felt Las Vegas was the best place to take it.

“With today’s show, not everyone meets the criteria to exhibit. The show is now 51 years old. There are a surprising number of people who have supported the show since day one either as attendees or as exhibitors.”

The tragic massacre Oct. 1 did not hinder the show.

“We were also the first trade show after 9/11,” MacGillivray said. “In challenging times, this industry comes together. They’re all competitors who compete on the track and in business. At the SEMA show, everyone came together again. We consider ourselves part of the Las Vegas community. We have always marveled at how close-knit everyone is here.”

The SEMA Show and SEMA Ignited are organized by the Specialty Equipment Market Association, the trade organization representing the $41.2 billion automotive aftermarket industry.