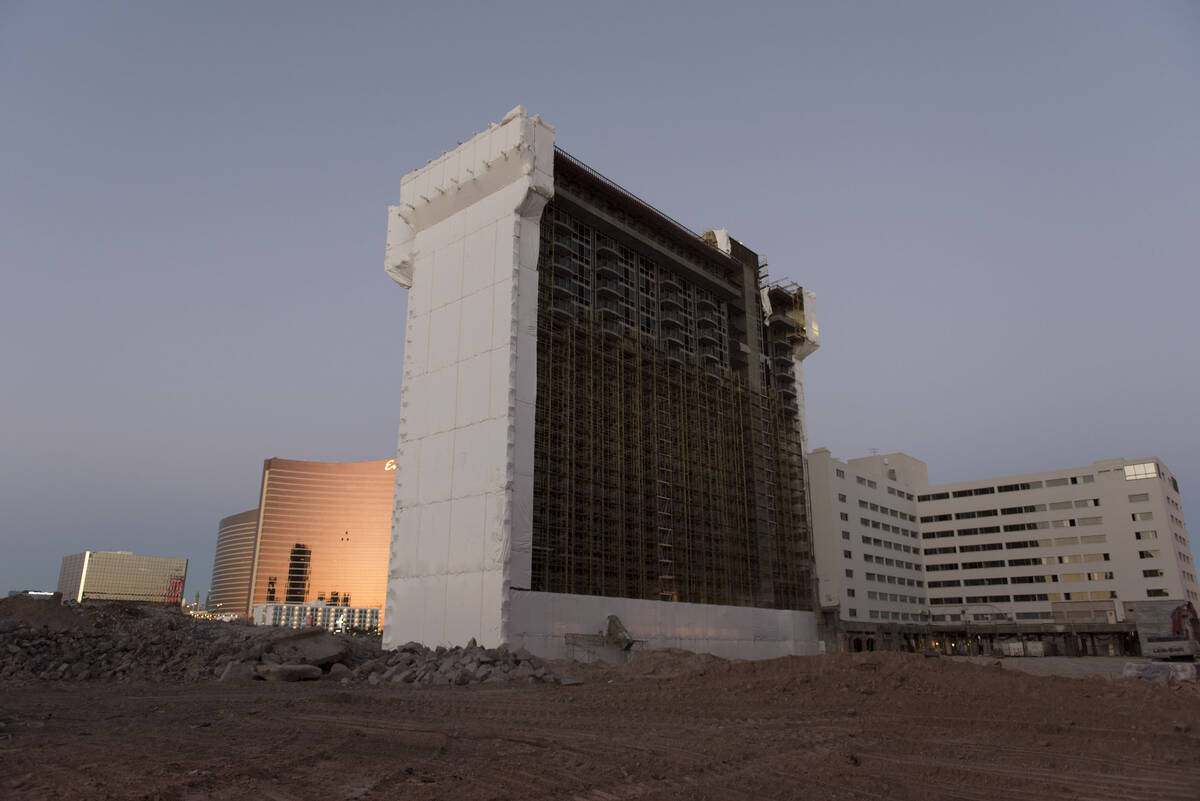 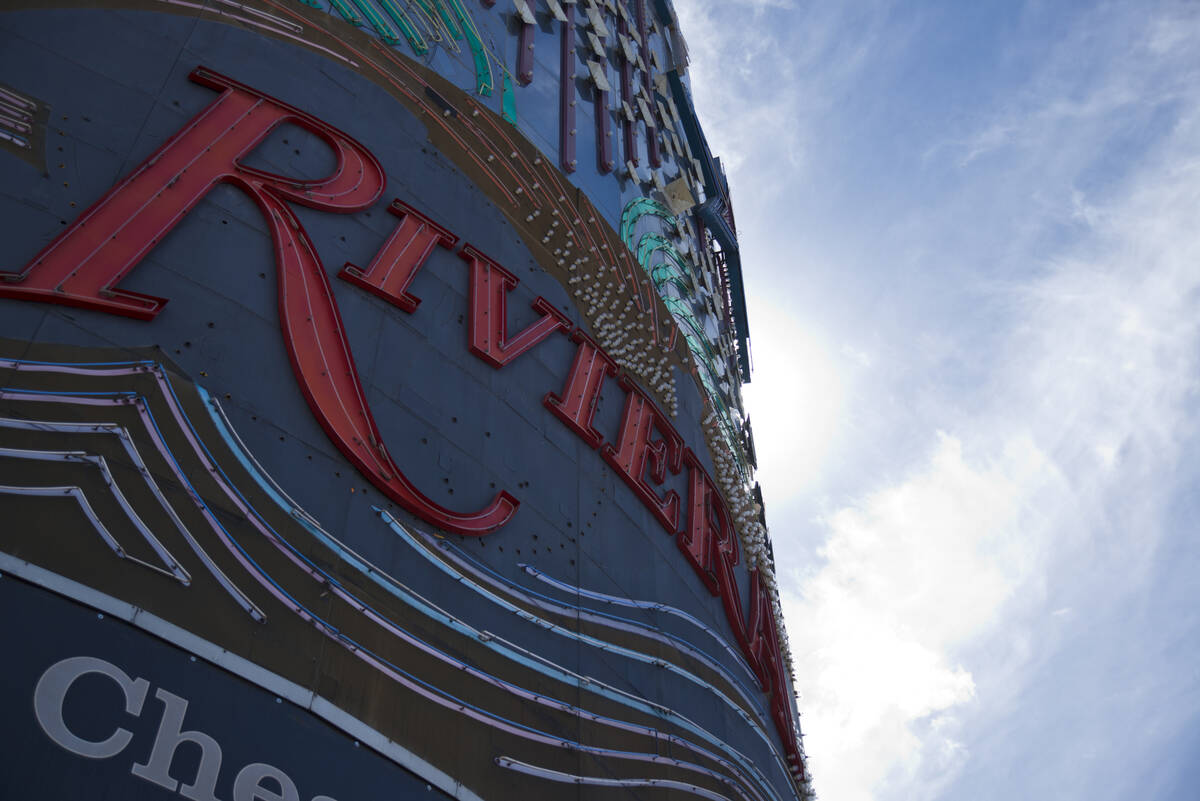 The sign at the shuttered Riviera hotel-casino is seen on the Las Vegas Strip in 2016. (Las Vegas Review-Journal)

In early 2020, before COVID-19 reared its ugly head, a Chilean real estate millionaire began a quest to buy property and develop a resort in Las Vegas.

Claudio Fischer, a former commercial airline pilot who once owned one of the largest salmon farms in the world, connected with the Las Vegas Convention and Visitors Authority to negotiate a deal to buy 10 acres on the southeast corner of Las Vegas and Elvis Presley boulevards.

LVCVA President and CEO Steve Hill and Chief Financial Officer Ed Finger flew to Santiago, Chile, to meet with Fischer and negotiate a $120 million deal to sell the land where the Riviera once stood.

But in March 2020, COVID-19 stung Southern Nevada’s economy, closing casinos for an unprecedented 78 days. When that happened, Hill and the LVCVA had more to worry about than selling real estate and both parties agreed to put everything on hold.

The LVCVA originally acquired the Riviera land to complete its development of the $1 billion Las Vegas Convention Center’s West Hall. A portion of the land was going to be used for a parking lot next to the West Hall and to shift the footprint of the building to the west so deliveries to the building were easier on the east side. The LVCVA planned all along to sell 10 acres of Strip-front land for potential resort development and to have a funding source for a renovation project.

Nine months after COVID-19 began beating up on the world, Fischer was back on the phone with Hill to reignite the land deal. Ten months later, in October 2021, Hill presented a proposal to the LVCVA board of directors to sell the land for the agreed-upon $120 million.

The deal was important to the LVCVA because proceeds of the sale were to go toward the two-year, $600 million renovation of the Convention Center’s North, Central and South halls, bringing them up to the standards set in the new West Hall. That renovation project is scheduled to begin in March.

A few more things happened since Fischer and the LVCVA reached an agreement on terms of the sale.

Because the LVCVA originally acquired the Riviera with tax-free bonds, it needed to reinvest the proceeds of the sale to a project also financed by bonds — the renovation. In addition, the Boring Co. began making deals with resorts to build its underground Vegas Loop transit system and some of the planned tunnels were close to Fischer’s future 10 acres.

The deal needed to close after June 30 and, after several communications between Fischer, Finger and LVCVA General Counsel Caroline Bateman, the land deal was nearly ready to close.

Hill told the LVCVA board of directors last week that he expects the deal to reach the finish line by Nov. 30, although Fischer has until Dec. 15 to close on the transaction.

So, by mid-December, the LVCVA will have the funds necessary to back the bonds that will be used in March to finance its renovation project, and Fischer will have 10 acres for his resort.

Under terms of the deal, the LVCVA will continue to have access to the land for parking and any outdoor convention exhibits. Fischer doesn’t have to start construction until Jan. 1, 2031, after which the LVCVA would have the option to buy back the land.

Ever since I learned of Claudio Fischer and the deal in October 2021, I’ve been trying to get an interview with him to learn about what he has planned for the site, next door to the Fontainebleau and across the street from Resorts World. He apparently wants the deal to close before he talks publicly about any plans.

Every indication points to him delivering a quality product to the Strip.

Fischer developed the Monticello casino resort near Santiago, Chile, and the Park Hyatt Mendoza hotel-casino in Argentina. He also has real estate holdings in Panama, owns two airlines and his company, Sun Dreams, is moving toward acquiring EnjoyHotels, which would make him one of the largest hotel-casino operators in Latin America.

Hill called Fischer an innovator and a good fit for Southern Nevada and “an interesting and fun guy to be around.”

Maybe we’ll learn more about what Fischer has in mind for the North Strip once the deal closes.

“Claudio understandably wants as much freedom to build what he would like,” Hill said in an interview last year. “We see this parcel as a real opportunity for the entire neighborhood. Not only is it our next-door neighbor, but it’s next door to the Fontainebleau and across the street from Resorts World and it’s a place where all those properties can meet.

“The growth of the northern part of the Strip is important to us and we see this as a real opportunity because there are a lot of great things going into this area along the resort corridor.”