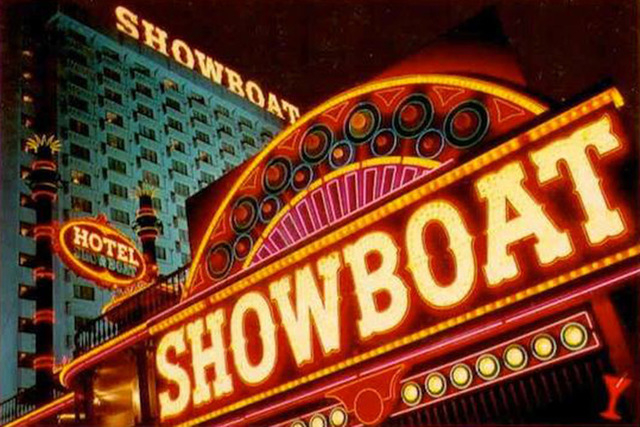 The opening of the Showboat Atlantic City 27 years ago carried the hoopla of a Las Vegas celebration.

Legendary entertainer Bob Hope broke a champagne bottle at building’s base to christen the resort, which was designed to resemble a cruise ship.

Showboat officials were joined by Atlantic City leaders and New Jersey’s governor in welcoming the state’s newest hotel-casino to the northern end of the Boardwalk.

On Sunday, the Showboat closed with much less commotion.

The name, synonymous with the casinos in various gaming markets since 1954, has vanished.

Current Showboat owner Caesars Entertainment Corp. shut down the property as part of an effort to shrink Atlantic City’s oversaturated casino industry. The Great Recession and competition from neighboring states have decimated Atlantic City’s gaming revenue, which has declined 60 percent since 2006.

The Showboat Atlantic City, however, was still considered a profitable resort up until its closing.

A move to Atlantic City was viewed as a way to expand the company beyond Nevada, where it operated the Mississippi riverboat-themed Showboat Las Vegas at the intersection of Fremont Street and the Boulder Highway.

By 1998, when Showboat Inc. was acquired by Harrah’s (now Caesars) Entertainment for $1.2 billion, the company had resorts in Las Vegas, Atlantic City, Australia, New Orleans and Indiana.

“The Atlantic City Showboat gave us the credibility to go into Australia,” former Showboat director Gregg Nasky said Tuesday. “The property also gave us an invite into England where they considered having us build something like Showboat over there.”

Nasky, 72, spent 15 years on Showboat’s board. An attorney who lives in Honolulu and practices law with an Hawaiian firm, Nasky was one of the three company officials who brought Showboat to Atlantic City.

Nasky made more than 80 trips in 2½ years to Atlantic City to secure the Showboat’s 10-acre Boardwalk site and the financing for the property.

After Showboat Atlantic City opened, the company’s board met every three months at the casino to show support for the location.

“Atlantic City was like old Las Vegas at the time,” Nasky recalled.

The late Jackie Gaughan spent 20 years on the Showboat board and was the lead director in the Atlantic City venture. The New Jersey Gaming Enforcement Division, however, wanted to deny Gaughan a license for the Showboat because of his ties to illegal gambling as a teenager. The Casino Control Commission unanimously overruled the recommendation.

“The family would never do anything to hurt the Showboat name,” Nasky said. “People knew the name Houssels and Gaughan were behind the Showboat.”

Showboat Las Vegas was one of the first casinos to be successful in attracting locals and tourists. The property was famous for its 106-lane bowling center, which housed televised professional matches and amateur events, and the sports pavilion, which was home to low-priced boxing, wrestling and roller derby.

The same operating ideas were brought to Atlantic City with a 60-lane bowling center.

On opening day, Modica said the Showboat would “cater to middle America, to working people, local business” and “the grind business,” in reference to the property’s slot machine customers.

Nasky said Harrah’s acquired the rights to the Showboat name, as well as various trademarks used in marketing efforts, including “Don’t Miss the Boat.”

But the Showboat name is gone.

Harrah’s sold Showboat’s Australian casino in conjunction with purchasing the company in 1998. The Showboat East Chicago in Indiana was renamed Harrah’s East Chicago and was later sold to Ameristar Casinos.

As for the Showboat Las Vegas, Harrah’s sold the casino to new operators in 2000, who renamed the property the Castaways and gave the facility a tropical island theme. However, the casino went bankrupt, was closed in 2004 and acquired by Station Casinos, which demolished the building in 2006. The site remains vacant.

Caesars expanded Showboat Atlantic City to 1,331 rooms and increased the casino to 128,000 square feet. The bowling center was replaced with a $65 million House of Blues complex that included a 2,400-person-capacity concert hall.

Nasky said he’s been following coverage of the Showboat Atlantic City’s closure with some sadness. The timing does carry some irony.

Today would be the 60th anniversary of the Showboat Las Vegas opening.