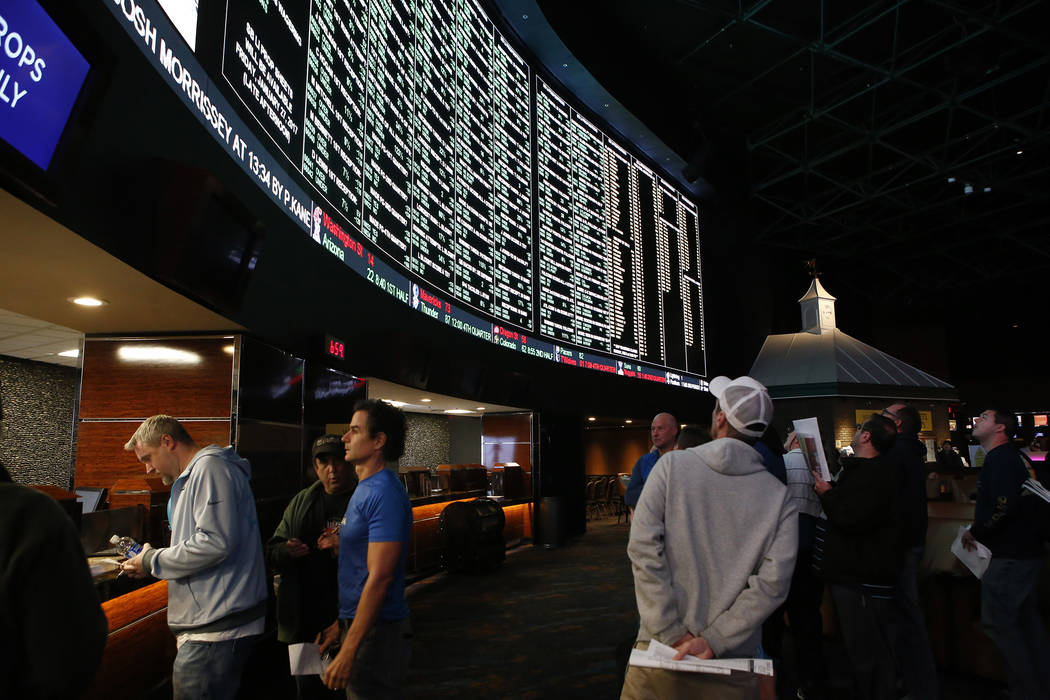 Betters wait to place their bets at the Westgate sports book on Thursday, Jan. 26, 2017, in Las Vegas. (Las Vegas Review-Journal)

The U.S. Supreme Court’s recent announcement that it would review a New Jersey case on sports wagering and the American Gaming Association’s continued push to repeal the law forbidding state-authorized sports gambling are clear indicators that sports betting is on its way to some major changes.

But will those changes be good for Nevada?

For years, sports books have been supportive of efforts to repeal the Professional and Amateur Sports Protection Act of 1992, the federal legislation that blocks states from allowing sports gambling.

Industry leaders argue that a repeal would bite more into illegal offshore betting than in the four states where some form of wagering is legal — Nevada, Oregon, Montana and Delaware.

The Nevada industry believes that it would remain the sports wagering gold standard if the law is repealed because it already has infrastructure in place to take advantage of sports betting on a national scale.

The William Hills and MGMs of the world have embraced mobile wagering and could establish a network to take bets nationally should the law be struck down in court or legislatively.

Gamblers and tourists will continue to flock to Las Vegas for the complete experience. Betting sports may be part of the motivation to make a trip, such as for the Super Bowl or March Madness.

It’s also been proved with the spread of commercial and tribal gambling in other states. While there have been a handful of regional exceptions — California tribal casinos have stolen share from Reno and Laughlin, for example — it’s hard to beat the total Las Vegas experience.

Should sports betting go national, just about everything will continue to flow through Las Vegas. Odds would still emanate from the local books and the rest of the country would continue to turn to Las Vegas for its wealth of knowledge about the industry.

There is one other theory about how Nevada sports books could be hurt by the Supreme Court’s review of Christie v. the NCAA. It’s a doomsday scenario outlined by legal experts Ryan Rodenberg and John Holden in an article in the Duke Law Review, “Sports betting has an equal sovereignty problem,” and reported earlier this month by Dustin Gouker in the Legal Sports Report.

Gouker reported that there are three likely outcomes to the Supreme Court’s review of the New Jersey case: that the court upholds the lower-court finding, effectively changing nothing; that the prohibition on sports gambling is struck down as unconstitutional, taking it off the books and enabling states to legalize sports betting; or that the court says the grandfathering of Nevada sports betting under the law is unconstitutional under the equal sovereignty doctrine, effectively banning sports betting everywhere, including Nevada.

That third outcome is the ultimate bad beat for the industry.

The “equal sovereignty doctrine” is a principle that the federal government must treat states equally. It came into play when parts of the Voting Rights Act were struck down in 2013.

Obviously, if that occurred, the American Gaming Association’s plan to get legislative action would accelerate and Nevada’s congressional delegation would be all over it.

To be sure, it isn’t a likely outcome.

But as any sports bookie will tell you, it’s important to analyze every potential outcome before placing a bet.