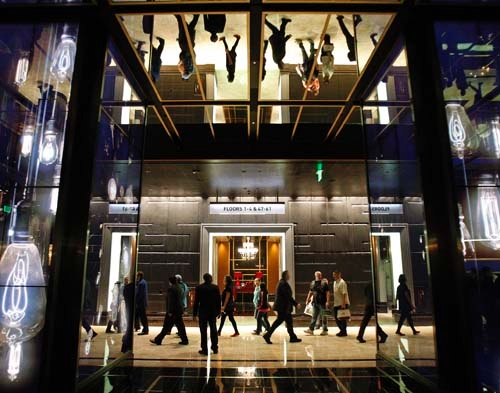 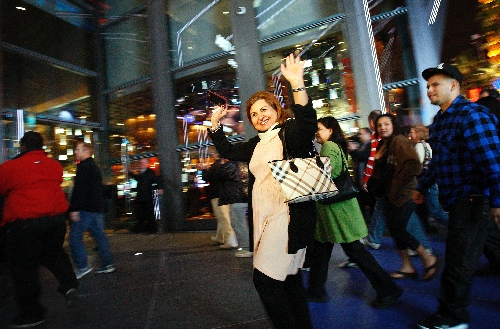 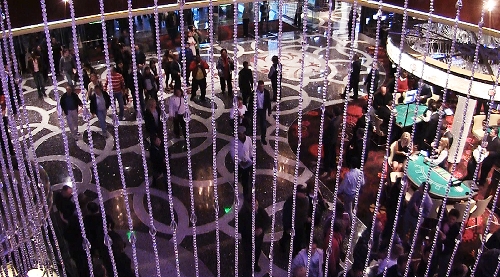 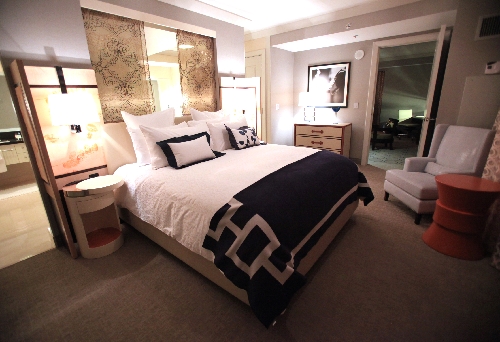 The Cosmopolitan of Las Vegas opened to the public on schedule Wednesday as locals joined tourists in exploring the Strip’s latest hotel-casino — and probably the last to open over the next decade as Las Vegas and the gaming industry recover from a weak economy.

With 10 seconds before the doors opened at 8 p.m., guests, staff and executives counted down the remaining moments before Killers frontman Brandon Flowers threw a nine on the craps table. His first of three throws was the signal to dealers and guests seated at the gaming tables that the casino floor had opened.

"It’s just the beginning," Cosmopolitan chief executive John Unwin said shortly after the opening. "We’ve brought the plane in for a touchdown. Now it’s time to take off, and all the charts should point up for the next five years."

Unwin said the resort’s opening signaled the beginning of the next generation of hotels in Las Vegas.

Billed as "polished without pretense," The Cosmopolitan is unique among Strip hotel-casinos in that its vertical design places shops, restaurants and other amenities on multiple floors throughout the two 50-story towers.

The $3.9 billion resort sits on 8.7 acres between the Bellagio and the CityCenter complex.

Owned by Germany’s Deutsche Bank after foreclosing on the original developer in 2008, The Cosmopolitan opened 2,000 of its 2,995 rooms Wednesday. It is the only hotel-casino to open on the Strip this year, with all the rooms scheduled to open by July.

The resort has a 100,000-square-foot casino and 36,000 square feet of high-end retail shops, including British-brand AllSaints and Beckley, a boutique selling women’s clothing and accessories.

Ashley McMillan, 27, checked in with her husband, Forrest, on Wednesday afternoon for two days.

"This is new and different and definitely appeals to a younger crowd," she said.

Hotel guests were able to check in during the afternoon before the grand opening.

Previously a regular at Encore, Forrest McMillan, 27, switched his preference to The Cosmopolitan.

"My parents stay at the Encore, while we are staying here," the Dallas resident said. "This is well-designed and interesting, while the Encore is comfortable, relaxed luxury. I like luxury, but I’m just too young for the Encore."

"We enjoy coming to Las Vegas for the openings of new hotels. We were here for the opening of Aria, Encore and now The Cosmopolitan," Bibbs said. "This is going to be our last one for a few years because of the economy. I wanted to surprise my mom, aunt and girlfriend, so we are staying here for two nights."

Before the public opening, The Cosmopolitan hosted a party for invited guests, who sampled wine and food from the resort’s restaurants.

Flowers played a three-song set in the three-story Chandelier Bar. Late Wednesday, he played a private concert for invited guests by the resort’s signature pool that overlooks the Strip.

On New Year’s Eve, The Cosmopolitan will host a party with headliners ColdPlay and Jay-Z.

On Wednesday morning, Unwin cut the ribbon with executives and others involved in the construction of the resort, including Related Cos. Vice President of Development Ron Wackrow, Perini Building Co. CEO Craig Shaw and architects David Rockwell and Brad Friedmutter.

"I’m very pleased with how The Cosmopolitan turned out," Friedmutter said. "It’s the designers and architects that create a place, but it’s the people who fill out that space with activity. I’m very happy. It was an incredible collaboration."

Unwin told about 200 employees and invited guests that The Cosmopolitan was "bringing back a bit of personality to Las Vegas."

"We all understand that this is an opportunity of a lifetime, and we are treating it that way," he said. "The Cosmopolitan embraces Las Vegas. Welcome to luxury redefined with (luxury) restaurants, shopping, music and state-of-the-art gaming."

Unwin also thanked employees, from construction workers to hotel staff, calling them "co-stars" for their work in preparing to open the property.

The hotel-casino has a vertical multitower design that blends into the skyline of CityCenter. Its private terraces provide views of the Strip and the entire city.

"This is the biggest project we’ve ever managed," Wackrow said. "It’s nice to have a success. We expect this project to be a big success. This is a proud moment for me and the entire team who built this building. It was a true collaborative effort."

The new resort will increase overall room capacity in Las Vegas by 1.5 percent and includes a spa and fitness facility, three pools and 150,000 square feet of conference space.

In-room amenities include plasma televisions, a custom bar, and Japanese soaking tubs and rain showers in the bathrooms.

After all the speeches by company executives and local politicians have concluded, the question remains: Will the new hotel-casino be successful?

The Cosmopolitan is not part of a major hotel chain, even though it announced a partnership with Marriott International’s Autograph Collection. Through the partnership, Unwin expects the resort to benefit from the Quest loyalty program, which drives customers in the leisure, corporate and group markets.