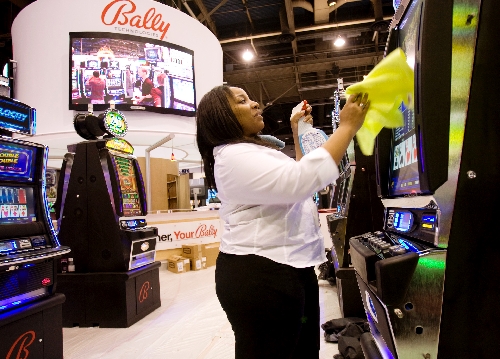 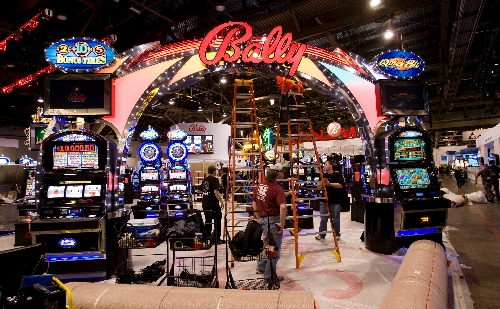 The trade show hasn’t started but the deals are already being made.

During a Sunday meeting with analysts before this week’s Global Gaming Expo, Bally Technologies announced it had won contracts to provide equipment that operates two Canadian province lotteries.

But analysts are hoping Bally’s deal, which could be worth $100 million annually to the Las Vegas-based company, could jump-start interest in gambling equipment among buyers attending this year’s G2E, the industry’s largest annual trade show and conference.

Major slot machine manufacturers typically use G2E, which is at the Las Vegas Convention Center but is closed to the general public, to unveil new gaming advancements for the coming year.

Gambling equipment sales have sagged for several years because of the recession and moves by casino operators to slice budgets for purchases.

Analysts also met with representatives of slot machine giant International Game Technology over the weekend and received a preview of the trade show.

Credit Suisse gaming analyst Joel Simkins said executives from IGT and Bally were hopeful that casino companies would see the need to purchase gaming equipment and update their casino floors.

"Both management teams were cautiously optimistic about operator capital budgets starting to improve heading into 2011," Simkins said. "We remain positive on the gaming equipment suppliers as a whole."

The 2009 G2E attracted almost 26,000 attendees and exhibit personnel, which was a decline of 3.5 percent from a year earlier. Officials from the American Gaming Association, one of the show’s organizers, said in August they thought the 2010 attendance would equal or exceed 2009.

Gaming analysts have focused recently on Canada as a potential market for slot machine makers. Several provinces have been looking at replacing their gaming systems and slot machines, which could provide the potential for sales of more than 25,000 new games.

Quebec may be nearing a decision on which companies it will contract with to replace 12,000 slot machinelike video lottery terminals used in the province. That move could spur Alberta and Manitoba to make similar decisions, opening the potential for another 26,000 new games to replace older machines.

Wall Street was quick to praise the Bally deals with Ontario and British Columbia.

"The combined contract was the largest of the Canadian system contract(s) out for bid and should have a very positive impact on Bally shares," Roth Capital Partners gaming Todd Eilers told investors.

Wells Fargo gaming analyst Carlo Santarelli said the transaction could allow Bally to have a leg up on the competition for other Canadian gaming opportunities.

"In addition to these contract wins, which we believe speak well to the continuing momentum and strength of the Bally systems product in competitive procurements, we believe Bally is well positioned to capitalize on existing outstanding Canadian system (proposals)," Santarelli said. "These procurements further support our view that Bally’s high margin systems business … serves as a meaningful future growth driver."

The Ontario Lottery and Gaming Corp. and the British Columbia Lottery Corp. selected Bally to replace their current gaming management systems after a nearly 12-month search. Bally will provide the systems to monitor all slot machines at multiple sites within each province, including slot accounting, player marketing, business intelligence, and media-management products.

"We realize there is much work to be done in both the contractual process, and, if contracted, the implementation process," Bally CEO Richard Haddrill said. "We look forward to finalizing the process and beginning a collaborative relationship that will help us grow and evolve our programs."