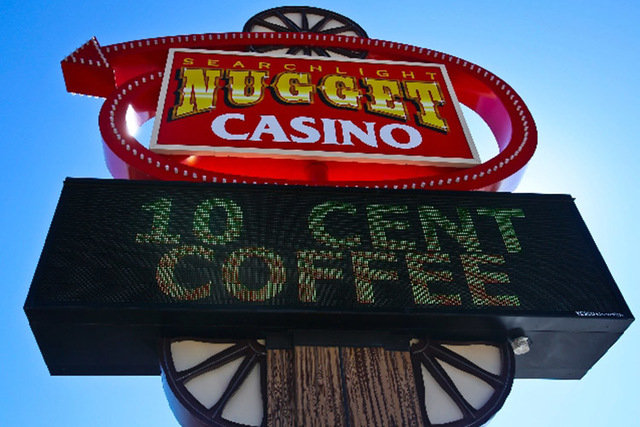 The sign at the Searchlight Nugget touts the casino's 10-cent cup of coffee, a special that dates to the 1950s. (LAS VEGAS REVIEW-JOURNAL)

Herbst family-owned JETT Gaming was given tentative approval Wednesday by state gaming regulators to take over ownership and operation of the Searchlight Nugget, the historic gaming site in tiny Searchlight.

The property, which was built in 1979 by Warren and Verlie Doing, fell on hard times over the past few years because of the recession. The largest factor was the opening of the Mike O’Callaghan-Pat Tillman Memorial Bridge in 2010, which diverted traffic traveling to and from Arizona away from U.S. 95 and Searchlight.

JETT Gaming executive Tim Herbst and Chief Financial Officer Michael Clark told the Gaming Control Board the goal is to add amenities to the Nugget to give travelers a reason to stop in Searchlight, which is 60 miles south of Las Vegas.

JETT Gaming, a slot machine route operator with nearly 2,000 games, also operates the Terrible’s Searchlight that is 300 yards from the Nugget.

“We have different ideas on how to pull people off the road,” Herbst said.

Herbst said the Terrible’s has a gas station, snack bar and convenience store, with 75 slot machines. With the Nugget, the plan is to improve the restaurant offerings, expand the gift shop and also bring in newer slot machines.

He estimated 85 percent to 90 percent comes from the drive-by traffic, rather than the town of more than 500 residents.

“We’d like to give folks heading to the lake a reason to stop,” Herbst said. He said JETT Gaming was exploring the addition of some type of museum or historical center at the Nugget to attract visitors.

A sale price was not disclosed.

In 2013 Verlie Doing told the Review-Journal she wanted to sell her Searchlight businesses, including the Nugget, the 21-room El Rey Motel, various commercial buildings and 41 acres for $5 million. Warren Doing died in 2014.

Herbst and Clark told the Control Board the parcels JETT purchased were near the casino, but very small.

The sale gives JETT and the Herbst control over five Nevada casinos.

Last month, the company took over the Gold Strike south of Las Vegas in Jean. Herbst said Wednesday the company will change the name of the property, per an agreement with MGM Resorts International, which previously owned the casino.