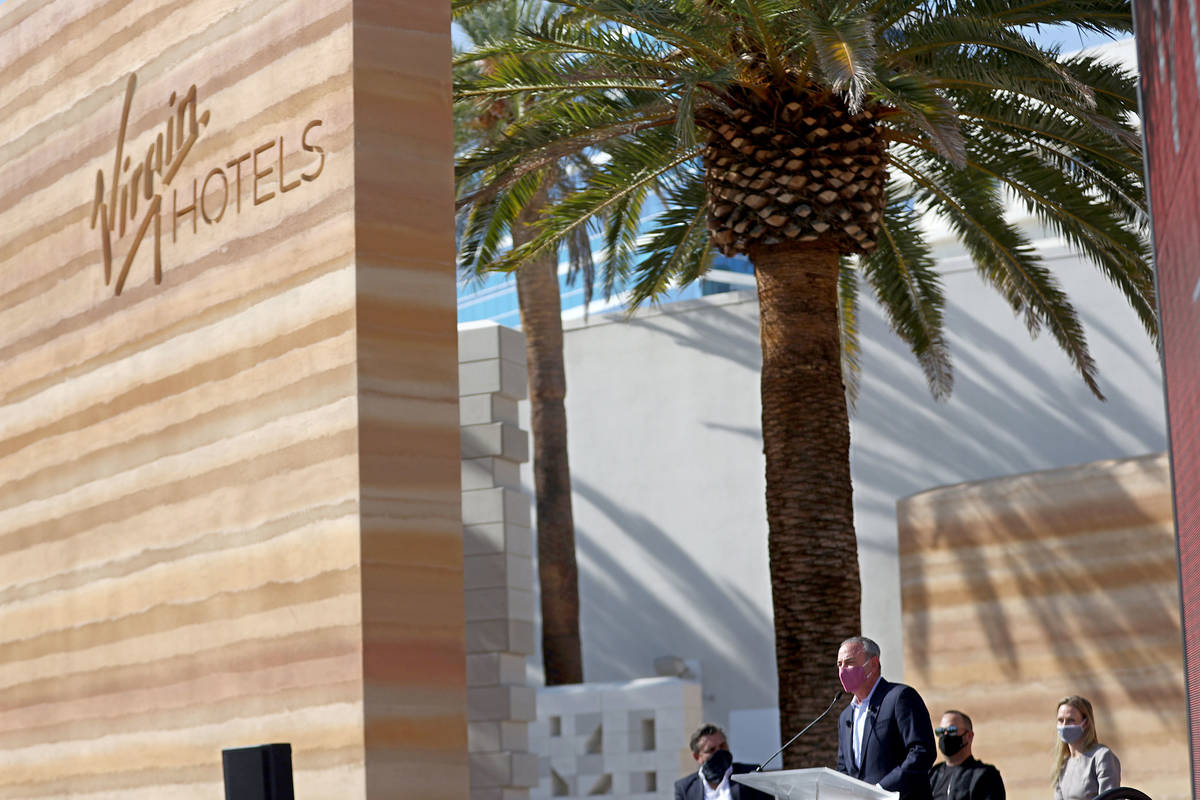 If the Nevada Gaming Commission concurs at its Oct. 22 meeting, Mohegan Gaming & Entertainment, operated by Connecticut’s Mohegan Tribal Gaming Authority, would run the casino at Virgin Hotels Las Vegas at the former site of the Hard Rock Hotel at Paradise Road and Harmon Avenue.

The property plans a Jan. 15 opening after a $200 million makeover.

The Nevada Gaming Control Board unanimously recommended approval of the licensing of a dozen executives and tribal officers in a two-hour hearing Wednesday.

Mohegan board members answered questions from their tribal headquarters in Uncasville, Connecticut, in an online meeting with regulators in Nevada.

Mohegan would bring the experience of operating casinos in three countries — South Korea, Canada and the United States — with nine properties in eight jurisdictions, 25 million annual visitors, 4,600 hotel rooms by 2023, more than 110 restaurants, bars and nightclubs and more than 22,000 employees by 2025.

The company expects to bring back 300 former Hard Rock Hotel employees that have operated the building for more than 13 years and affiliate with Culinary workers union Local 226, Bartenders union Local 165 and the International Union of Engineers Local 151.

In addition to its flagship Mohegan Sun property in Connecticut that opened in 1996, the tribe operates the Ilani tribal casino in Ridgefield, Washington; the Paragon Casino Resort in Marksville, Louisiana; Resorts Casino Hotel in Atlantic City, New Jersey; Mohegan Sun Pocono in Wilkes-Barre, Pennsylvania; the Fallsview Resort Hotel and Casino Niagara in Niagara Falls, Ontario, in Canada; and the Inspire Entertainment Resort near Incheon International Airport in Seoul, South Korea.

Executives also said the tribe is on the verge of opening a new integrated resort in Athens, Greece. The Canadian properties are temporarily closed by the coronavirus pandemic and the South Korean resort opens in 2022.

Other details about the planned new management of the Virgin Hotels casino emerged in the hearing:

-The Control Board began its investigation of Mohegan Gaming in December. Agents found no concerns with any board and management licensees and the COVID-19 pandemic slowed the approval process.

-When the pandemic closed casinos worldwide, Mohegan furloughed 98 percent of its workforce, or about 11,000 employees. The tribe continued to pay all employees’ health benefits.

-The hotel will be owned by Richard Branson’s Virgin Hotels, collaborating with the Hilton Curio Collection. The affiliation with Hilton will enable the company to book customers through the Hilton Honors loyalty program.

-While the casino would be managed by Mohegan, the hotel will be operated by JC Hospitality Partners under General Manager Richard “Boz” Bosworth. Virgin, JC and Mohegan would have equal say in the operation of the resort.

-The casino will have 650 slot machines and 50 table games with the flexibility to change as demand requires.

-The casino sportsbook will be operated by Great Britain-based Betfred Sports USA, which has sportsbooks in four states and uses the Scientific Games Corp. platform.

-The property’s performance venue, which accommodates 4,500 and formerly was known as The Joint, will be operated by AEG Entertainment. The venue has yet to be renamed.

-The property was licensed with a high-limits private gaming salon, which will offer rules and limits matching those of the flagship Mohegan Sun.

-General Manager Joe Hasson confirmed there would be no poker room in the casino and he said while he doesn’t rule one out, there are no immediate plans.

-The tribe strives to be the most transparent Native American tribe in the country and operates under “the Spirit of Aquai,” a centuries-old guiding philosophy that encourages a warm and welcoming atmosphere, passionate and dedicated employees based on mutual respect, providing outstanding service “that goes above the beyond” and building productive long-term relationships.

-Executives said the company’s Momentum loyalty program enables players to collect points in the casino and use them for non-gaming amenities. Leaders are hoping to cross-market the Las Vegas property with other Mohegan outlets and leaders noted that the nonstop air service between Seoul and Las Vegas on Korean Air could become a key conduit to new Asian casino traffic.

-Mohegan has had several firsts in its history, including being the first tribe to own a professional sports franchise with the Connecticut Sun, which plays its WNBA games at its 10,000-seat Mohegan Sun Arena. One of the light moments in Wednesday’s meeting involved the Mohegan executives admitting they were in denial about the Connecticut Sun’s post-season basketball series loss to the Las Vegas Aces last month.

Hasson was asked about the financial struggles facing the casino industry with the pandemic and he said he was optimistic about the future.

“Having been in Nevada for the amount of time that I have described and having been in the industry of hospitality and gaming for far longer, I know that our industry is a resilient one,” Hasson said. “I also know that our industry is very capable of reinventing itself continuously and it is responsive to economic challenges and economic opportunities. We will take great care of both. We will watch them carefully and prosecute them accordingly.”

Hasson also said construction crews are working seven days a week to complete the hotel-casino that is one of the closest to McCarran International Airport and UNLV. Even with the pandemic in play, Hasson said Mohegan did not back down from spending on its Las Vegas investment.

The steady flow of funding from the tribe allowed Virgin Hotels Las Vegas “to stay on the glide path that was originally planned for investing in this resort.”

“I can assure you here today no such decisions to slow down the investment that we planned in Las Vegas took place,” he said. “I had a checkbook that was planned and thoughtfully presented long before COVID became a reality. With due care and with my colleagues working hand in hand with me from Connecticut, we’ve carefully deployed that capital without being asked to change that capital.”