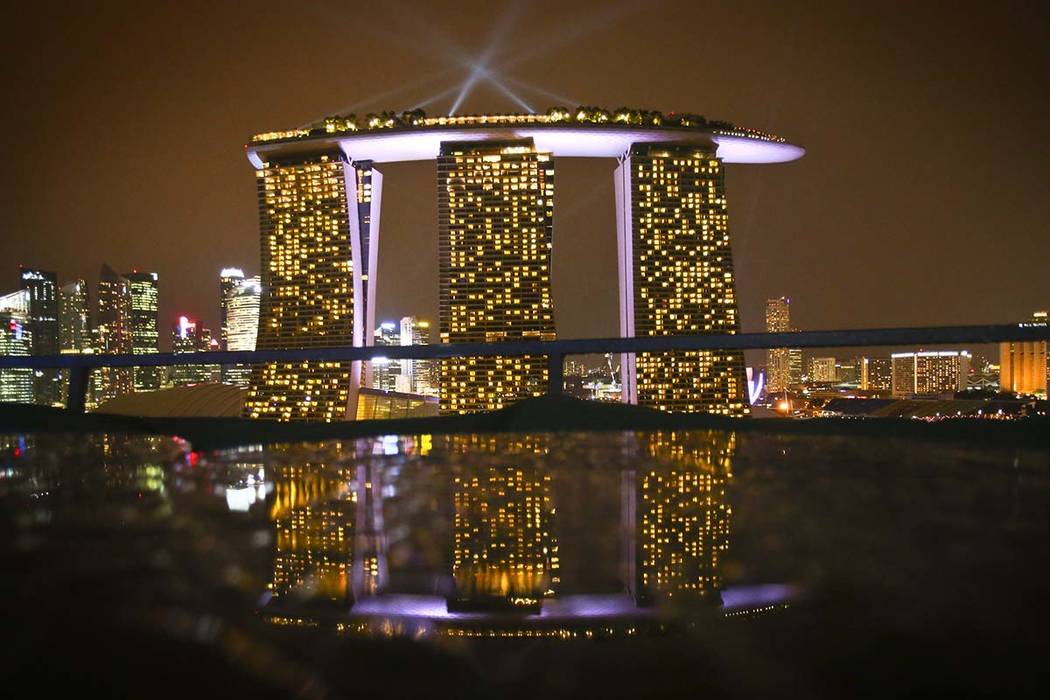 A reflection of Marina Bay Sands Singapore from a table at Gardens by the Bay, Dec. 13, 2012. The 2,561-room hotel opened in 2010, located on reclaimed land in Marina Bay. (Jeff Scheid/Las Vegas Review-Journal) 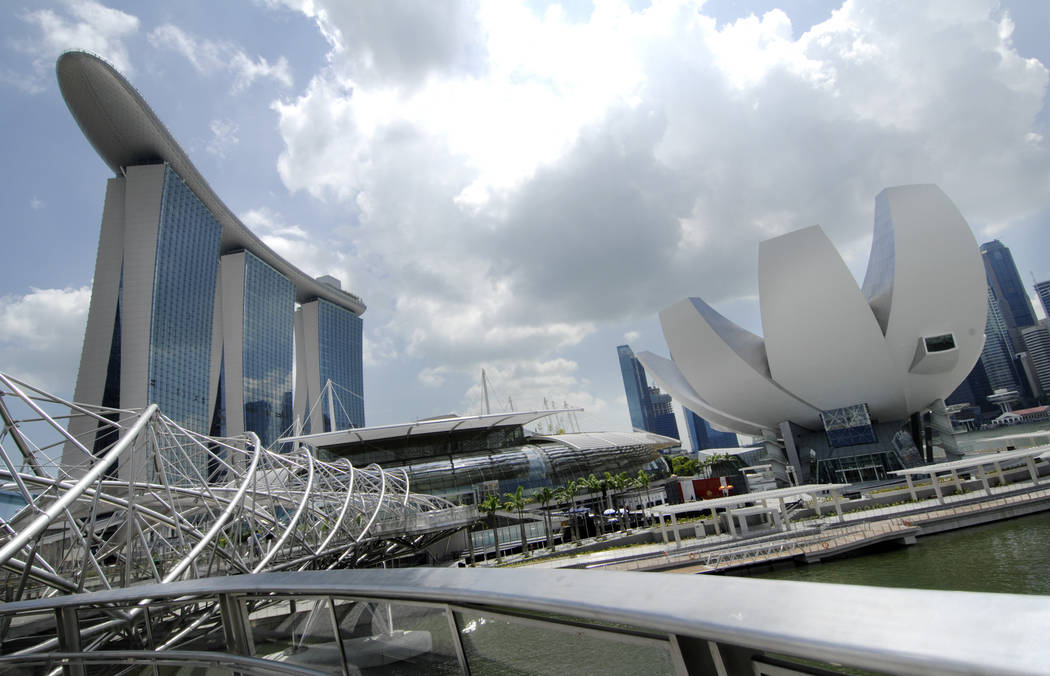 The Marina Bay Sands is seen against the financial skyline in Singapore, Feb. 17, 2011. (Wong Maye-E/AP, file) 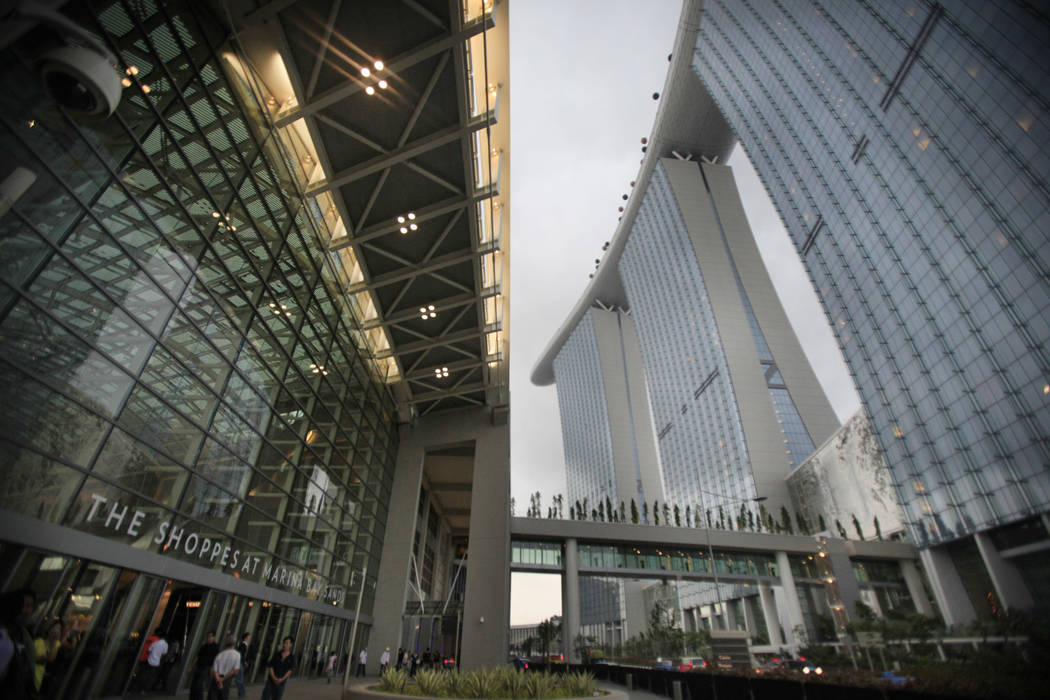 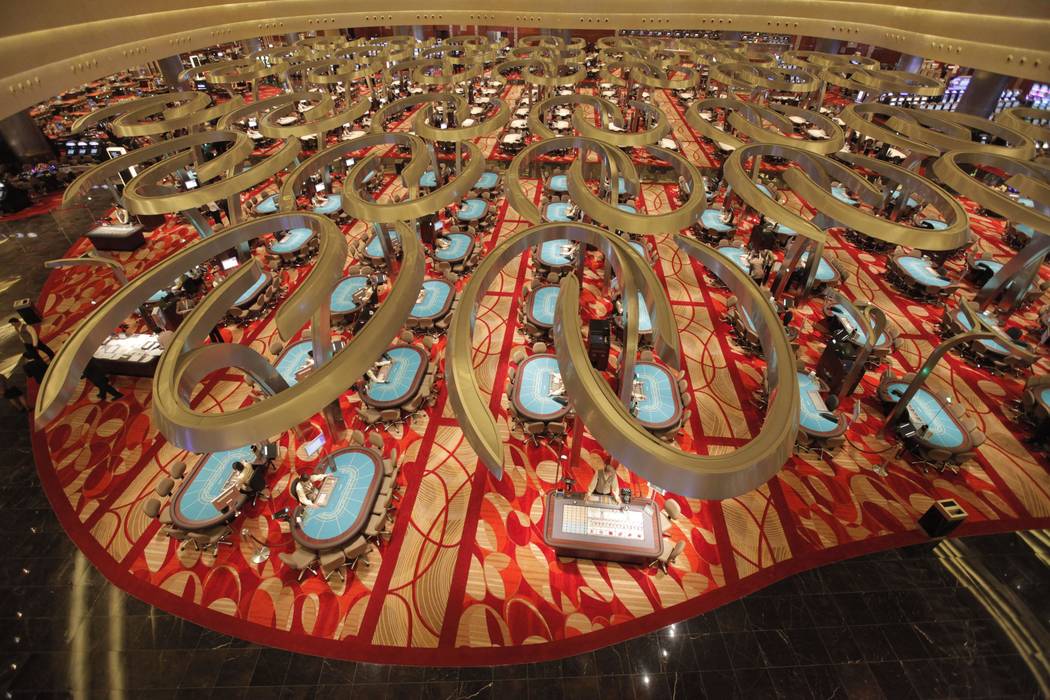 Las Vegas Sands Corp. will invest $3.3 billion to expand its non-gaming offering in Singapore as part of a larger deal with the Asian island city-state to extend the industry’s duopoly.

Sands will build a 15,000-seat arena, a 1,000-suite luxury hotel tower and additional meeting space at its Marina Bay Sands property, the company announced Wednesday. It also will receive the right to add an additional 1,000 gaming machines to the casino floor.

Singapore, in return, will not issue any more gaming licenses before January 2031, the statement said. Las Vegas Sands and Genting Group are the only casino companies with a gaming concession on the island, which attracts nearly 20 million visitors annually.

The duopoly has enabled Marina Bay Sands to generate an earnings margin of 52 percent, one of the best results globally for an integrated resort. However, earnings declined last year for the first time since the property opened in 2010 because it is facing gaming and lodging constraints.

“We just don’t have enough slot machines, ETGs, rooms. We have demand. We don’t have supply,” Las Vegas Sands Chief Operating Officer Rob Goldstein told analysts during the company’s earnings call on Jan. 23. “I can’t tell you how frustrating it is that it’s such a wonderful asset that could grow, but right now is not able to.”

“We believe the plan to add 1,000 new all-suite rooms will rejuvenate the attraction of the market and could help stem the tide of VIP declines,” Macquarie Research analyst Chad Beynon said in note Wednesday.

The resort last year generated earnings before interest, taxes, depreciation and amortization of $1.69 billion, down from $1.76 billion in 2017, according to Jefferies analyst David Katz.

Sands could fund the investment by selling a stake in the mall at Marina Bay Sands, said Katz, who described it as “one of the most attractive in the world.” Sands has said it could sell a 49 percent stake in the mall.

“We believe the potential (mall) sale could help shift capital in Singapore from a mature asset to an early stage development without substantially increasing the capital investment,” Katz said in a note Wednesday.

The announcement comes as Las Vegas Sands vies with other casino companies from around the world to build one of three integrated resorts planned in Japan.

“The additional investment should also help Sands’ Japan Integrated Resort bid as it underlies the company’s commitment to its markets and track record of developing iconic properties,” Beynon said.