Lake Elsinore, California, resident Ryan Dannettelle was enjoying a trip to Las Vegas the weekend of July 24 as he has many times in the past.

In town celebrating his cousin’s baby shower, Dannettelle, 32, and his group, which included his girlfriend and friends from Las Vegas, were visiting various establishments on the Las Vegas Strip and downtown when the night took an unexpected turn as they tried to enter the D Las Vegas.

A security guard for the property stopped Dannettelle after his girlfriend and another female member of the group were allowed in, according to Dannettelle.

The security guard explained to Dannettelle that anyone with face or neck tattoos or women with low-cut shirts that bared their midriff were not allowed inside the casino on Friday and Saturday nights.

“We were walking down Fremont, cutting in and out of casinos, doing what everybody does, having a good time. He (the security guard) tells me they won’t allow anybody in with tattoos from the neck up, citing new dress code policies. I looked at him and I kind of laughed and said, ‘Are you serious?’ He said, ‘Yeah, ‘I’m dead serious,’ saying it’s a new policy, saying situations have happened here in the past and we just can’t let you in.”

After he was barred from entering, Dannettelle returned with his phone to document the security guard stating the new standards to alert his friends and family on Instagram about the tattoo policy.

Some wild times we’re living in. I would’ve never thought being in @vegas one of the biggest tourist attractions people travel all over the world to go to and I would be denied access to a casino because I have tattoos on my neck. Tattoos being more mainstream than ever, you’re really going to enforce such a thing? But hey if these are someone’s rules, fine. I was being super respectful even though I felt like I was being talked down too. So how did all this happen? I was following our ladies in @thedlasvegas when I was stopped and pulled to the side. I was told I could not enter because I have tattoos from the neck up. I laughed and seriously thought they were joking until he gave me his whole dress code speech. While the ladies were inside waiting and confused on what was going on, their hotel bouncers/security were trying to take photos of their IDs to remember where they lived because of how beautiful they look. Keep in mind their “upper extremities” were exposed and they never denied them access. Instead they showered them with creepy sexual comments and stated they wanted to take them home. It was a good thing they never brought this to my attention until we walked way down the street because they knew I would’ve really made a problem. With @vegasbikefest coming up, just wanted to let all the homies know who’re covered in art that you might not want to book a room at @thedlasvegas unless you’re cool with getting profiled and having your ladies sexually harassed. Anyways to The D hotel and casino, good luck with all that dress code stuff and FUCK YOU! #babyboomerrules #thedhotel #lasvegas

“I was polite and I walked away,” Dannettelle said. “Then I thought nobody is going to believe me if I tell them this, so I walked back to the guy and I was recording and he could see I was recording and told him, ‘Hey, do you think you could repeat yourself one more time about your new policies?’ ”

Dannettelle said he never thought a situation like this would play out in Las Vegas, a place where people go to have fun.

“I was shocked,” he said, “because this is Las Vegas and I didn’t think anything like this would happen in Las Vegas.”

After Dannettelle’s video racked up almost 700 comments, with many also leaving messages on the D’s Instagram page, the resort announced that it no longer was going to enforce the tattoo ban.

The post highlighted new door policies that the casino said were put into place upon its June 4 reopening, including ID scanners, extra police officers on property, temperature scanning and a more restrictive dress code.

“In evaluating our policy, we determined that limiting face and neck tattoos was overreaching,” the D’s Instagram post read. “We made a mistake, and we have rectified it.”

The post got the attention of a notable tattooed Las Vegan, Corey Harrison of “Pawn Stars” fame, who commented to the D’s post, saying, “I’m happy me and my tattoos are still welcome at the @thedlasvegas.”

The D owner Derek Stevens called the situation a mistake on the casino’s end and noted how quick the property was to reverse the tattoo policy.

“There were just a handful of things that we implemented and we always knew things were going to be temporary,” Stevens said. “Then obviously this one blew up a little bit and we quickly said let’s have a quick meeting here. To be honest we really hadn’t had much feedback on the (tattoo) policy at all, and then when it hit our radar, we were like ‘Hey, we’ve got to adjust this.’ ”

As a business owner himself, Dannettelle said he understands that individual properties will have different rules. Despite that, he was baffled by the situation as he said he has been inside the D before.

“I definitely felt discriminated against, and it’s a terrible feeling because I know I’m not the only one that’s gone through this,” Dannettelle said. “I own my own home, I own my own company, I own cars and motorcycles. I’ve worked very hard in my life to get where I’m at now and to save up my hard-earned money to go to a place to spend my money, and a place is going to stop me and turn me down because of artwork on my neck. It’s a terrible feeling.”

Despite the attention the situation received and the change in the policy, Dannettelle said the hotel has yet to reach out to him personally.

Stevens said a member of the hotel’s social media team may have reached out to Dannettelle, but he could not confirm whether that occurred.

A large portion of the comments and messages on Dannettelle’s Instagram account were from tattoo artists or tattoo aficionados who were upset with the situation and said that they’ve been through similar situations. Some of those who reached out were Las Vegas-based tattoo artists.

“After the video took off, I had a lot of Vegas tattooers reach out and were very upset because, I didn’t know this, but all these tattoo artists and shops came together and raised a bunch of money for the victims of the Route 91 shooting,” Dannettelle said. “You can’t imagine the amount of disrespect that they feel from this casino not letting people in because of artwork. It really is a smack in the face to them, and I totally understand why everybody is upset.”

After mulling a delayed opening, the owners of Virgin Hotels Las Vegas plan to open for business in 2021. 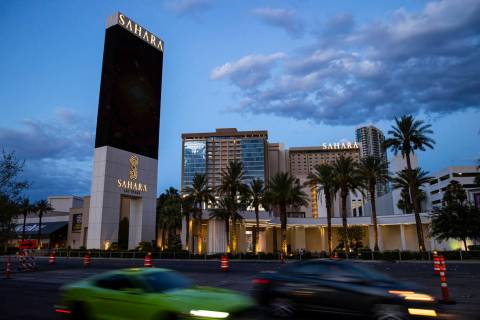 The Nevada Gaming Commission on Thursday is expected to issue $435,000 in fines against six casino companies.