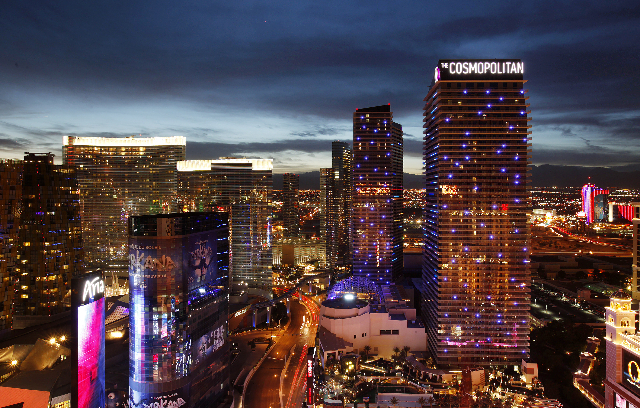 July’s gaming revenue totals on the Strip have left analysts wondering if the baccarat troubles in Macau have infiltrated Nevada.

Without the results from the high-end game, the Strip would have experienced a better than 4 percent increase in gaming revenue during the month.

Instead, July turned out to be the Strip’s second straight monthly dip although not the double-digit decrease witnessed in June.

The Gaming Control Board said Friday casinos statewide collected $922.8 million from gamblers during July, a drop of just under 1 percent. On the Strip, gaming revenue declined 2.1 percent to $524.9 million.

In Macau, high end baccarat players have all but abandoned the market over the last 14 months in reaction to the Chinese government’s crackdown on corruption, which has ensnared several junket operators who bring baccarat business to the Macau casinos.

“In our view, the weakness in Strip baccarat play is partly related to the anti-corruption initiative in China and the monitoring of Chinese visitors in Las Vegas,” Wells Fargo Securities gaming analyst Cameron McKnight told investors.

Brent Pirosch, director of gaming consulting for CBRE in Las Vegas, said baccarat play only affects “a handful of luxury properties.” Pirosch said the July results show signs of improvement in the mass market along the Strip. Slot machine revenue, for example, was up 9.1 percent while wagering on slot machines grew 2 percent.

“While the total for the entire Strip has turned decidedly negative in both the long-term and short-term comparisons, the mass market — where the majority of casinos make their money — remains positive,” Pirosch said.

Several analysts said baccarat results in July 2014, which were a 16 percent increase over the prior year, made for a tough comparison. They noted the the baccarat comparison becomes easier in the coming months. August 2014 baccarat revenue, for example, was down almost 14 percent compared to a year ago.

“We expect the market to continue to experience volatility in baccarat play given a likely slowdown in Chinese players,” Greff said.

Clark County saw mixed results in July. Downtown Las Vegas casino revenue grew 6.5 percent and the balance of Clark County locations increased revenue 6 percent. But the numbers were offset by an 11 percent revenue decline on the Boulder Strip, which includes Henderson, and a 9.4 percent drop in North Las Vegas.

Analysts praised downtown’s gaming revenue figures, which have increased in 10 of the past 12 months. McKnight credited the Downtown Project with developing new business ventures in the area.

“We have been witnessing a clear renaissance taking shape in downtown,” McKnight said.

The state collected $56.9 million in gaming taxes during August, based on gaming revenue collected in July, a 7.48 percent increase compared to a year ago. For the first two months of the fiscal year, gaming tax collections are up 9 percent.