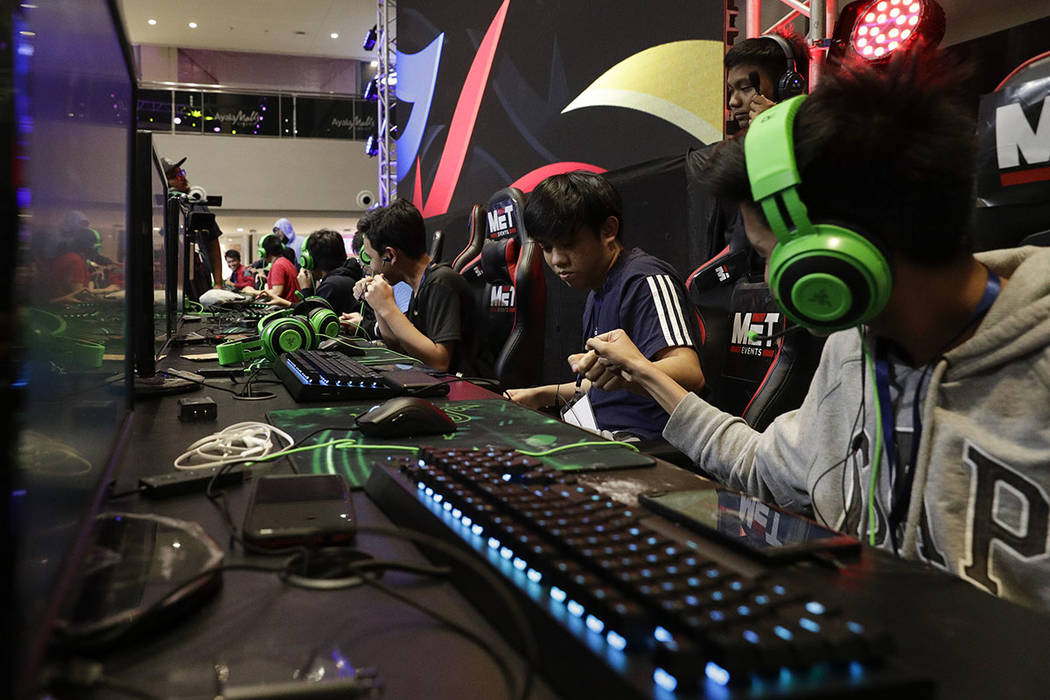 In this Thursday, Aug. 29, 2019, photo, esport (electronic sport) players react after winning their team match as they participate in the qualifying rounds for the first Philippine esport team in metropolitan Manila, Philippines. Esports, a form of competition using video games, will be making its debut as a medal sport at the 30th South East Asian Games in the country which starts November this year. (AP Photo/Aaron Favila)

Gambling on esports video games isn’t taking off the way industry leaders thought it would.

Why it isn’t and how industry leaders can generate enthusiasm for wagering that would attract a young demographic to the casino was addressed Wednesday in a series of panel discussions at the Casino Esports Conference.

Regulators, casino executives and international esports entrepreneurs and investors discussed the nuances of monetizing video game play on the first day of a two-day event at Luxor.

The South Strip resort is home to the HyperX Esports Arena, a 30,000-square-foot high-tech video game competition venue. The global esports industry is expected to generate $1.5 billion in revenue by 2020, but so far, it’s been slow to deliver revenue some believed would occur with gamblers betting on the outcome of video-game competitions.

Panelists identified a number of roadblocks that have kept casinos from generating gaming revenue on esports.

“We’re really at the cusp,” said panelist Jeff Silver, a Las Vegas-based attorney with law firm Dickinson Wright. “We could go either way. We have this esports phenomenon and there’s a lot of interest from the marketing perspective, but the fact of the matter is that the casino people want to know a way to monetize this particular interest that the 19-through-35-year-old customers of the casino might have in this particular activity.”

Silver, a former Nevada Gaming Control Board member, said esports entrepreneurs aren’t particularly interested in becoming licensed to participate in the gaming that could be generated by betting on competitions.

Another problem — many of the current esports players on the world’s numerous teams are under age 21. State law prohibits them and many of their underage fans from betting on their games. In New Jersey, bets can’t be taken if a team has a participant under age 18, and Indiana has simply banned betting on any esports competition.

In Nevada, Gov. Brian Sandoval convened the Gaming Policy Committee in 2016 to study esports, leading to the approval of new regulations by the Nevada Gaming Commission. Commissioners opted to categorize esports as “other” bets in race and sportsbooks, meaning that sponsors of a competition could petition the Gaming Control Board to allow wagering on an event-by-event basis.

Former Gaming Control Board Chairwoman Becky Harris, now an academic fellow at UNLV’s Center for Gaming Regulation, said in her panel that sponsors of an event are required to provide a full description of the event and the manner in which the wagers would be placed and winning wagers would be determined, and must convince regulators that the event can be fully, safely and effectively supervised.

But as panelist Karl Bennison, chief of the Control Board’s Enforcement Division, pointed out, the board has only approved three events in about two years.

“We’re capable (of regulating events), but we’re not getting the requests for these, so whether the argument is that our hurdles are too high or there just isn’t the drive, the operators aren’t seeing the market out there,” Bennison said. “We’re open to the idea and we’re trying to streamline the process and hopefully, eventually, we’ll make it a sport like any other sport, but there’s a ways to go.”

Integrity is another issue.

Bennison said he regularly receives alerts from Britain’s Esports Integrity Coalition to keep a watch on unusual wagering patterns and unexpected event results to monitor potential cheating or corruption in play. When he sees them, he’s somewhat thankful that betting on esports hasn’t caught on here.

Silver believes corruption is what killed jai alai wagering in Nevada after it was played at the MGM Grand (now Bally’s) in the 1970s and ’80s.

Panelist Brendan Bussman, a partner with Las Vegas-based Global Market Advisors, said the industry must educate lawmakers and regulators if betting on esports is to flourish. He said esports could face some of the same challenges as sports wagering because each state may have its own set of rules of how to regulate the industry.

“The industry needs to come together and figure out the rules and parameters they want to be regulated and let that lay a foundation and advocate for that,” Bussman said.