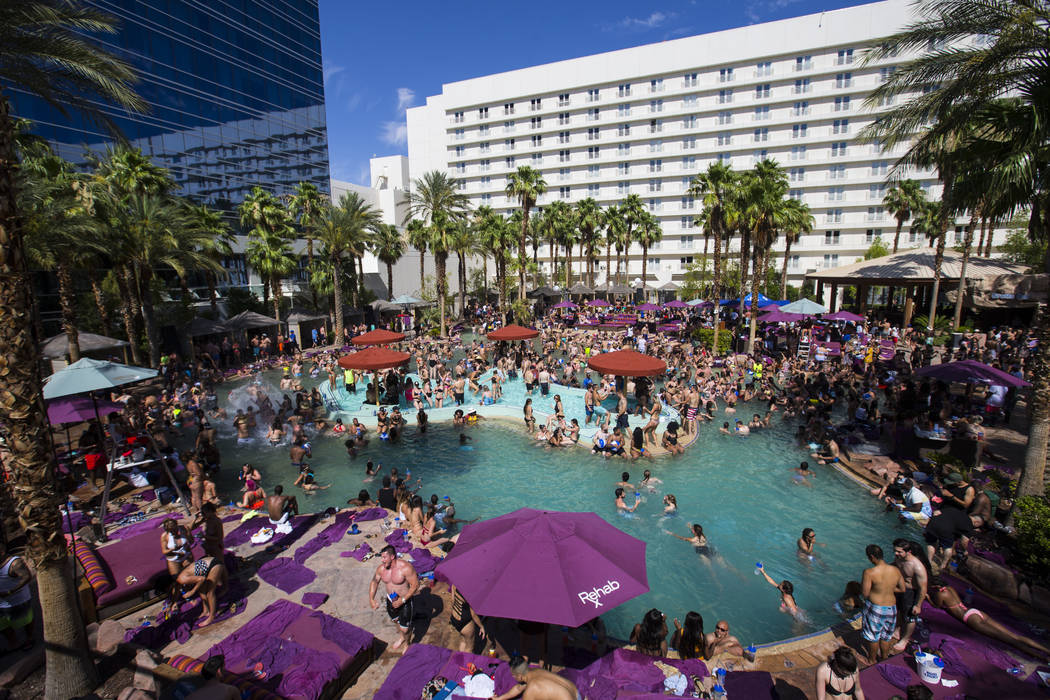 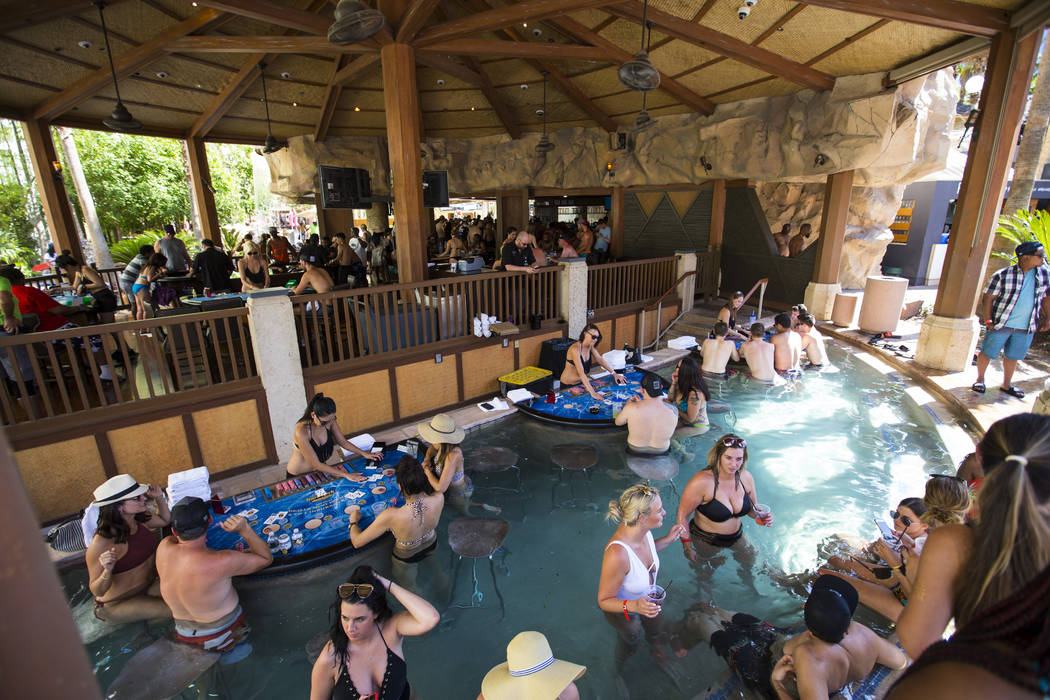 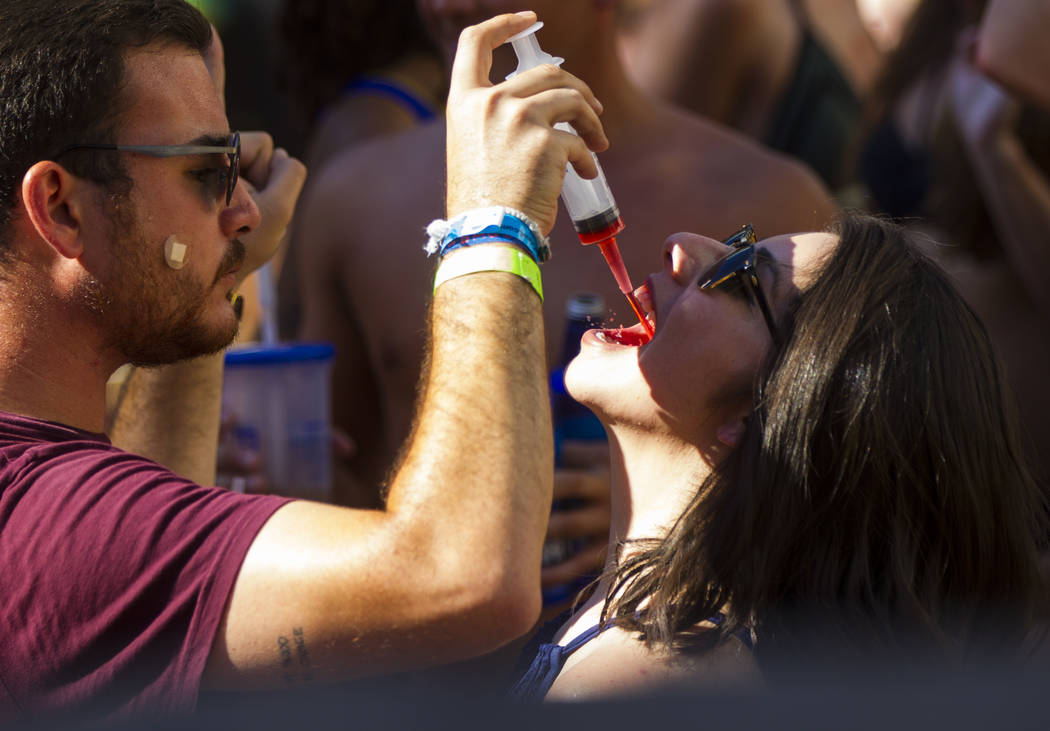 A shot syringe is one of many alcoholic options available at Rehab dayclub at Hard Rock Hotel in Las Vegas on Saturday, June 24, 2017. (Chase Stevens/Las Vegas Review-Journal) @csstevensphoto 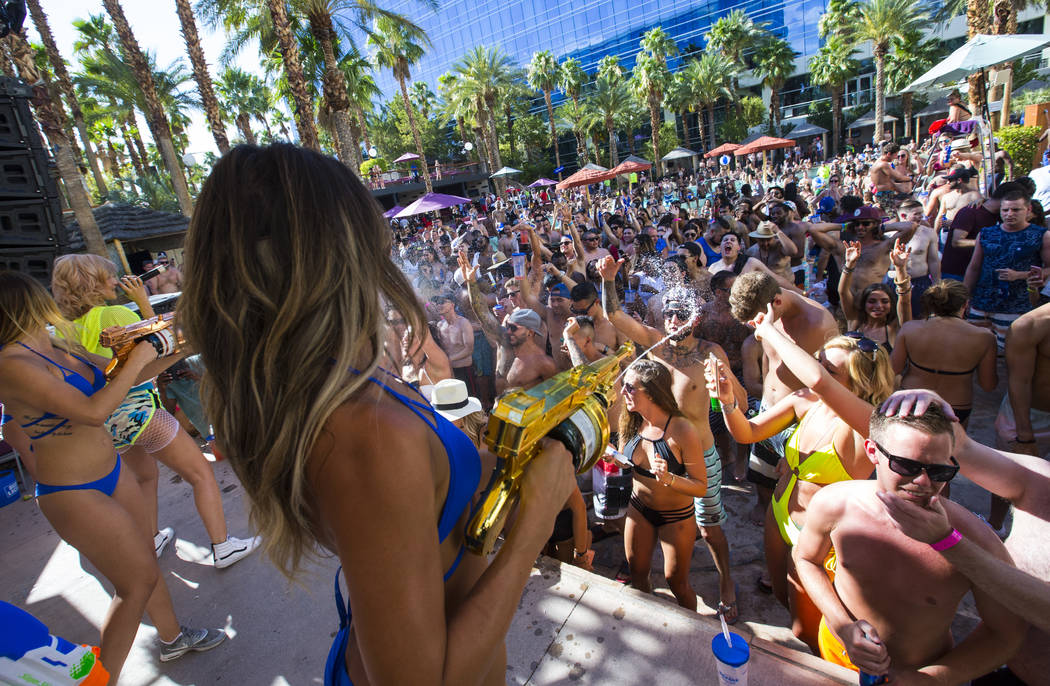 Champagne is shot out into the crowd as Lexy Panterra performs at Rehab dayclub at Hard Rock Hotel in Las Vegas on Saturday, June 24, 2017. (Chase Stevens/Las Vegas Review-Journal) @csstevensphoto 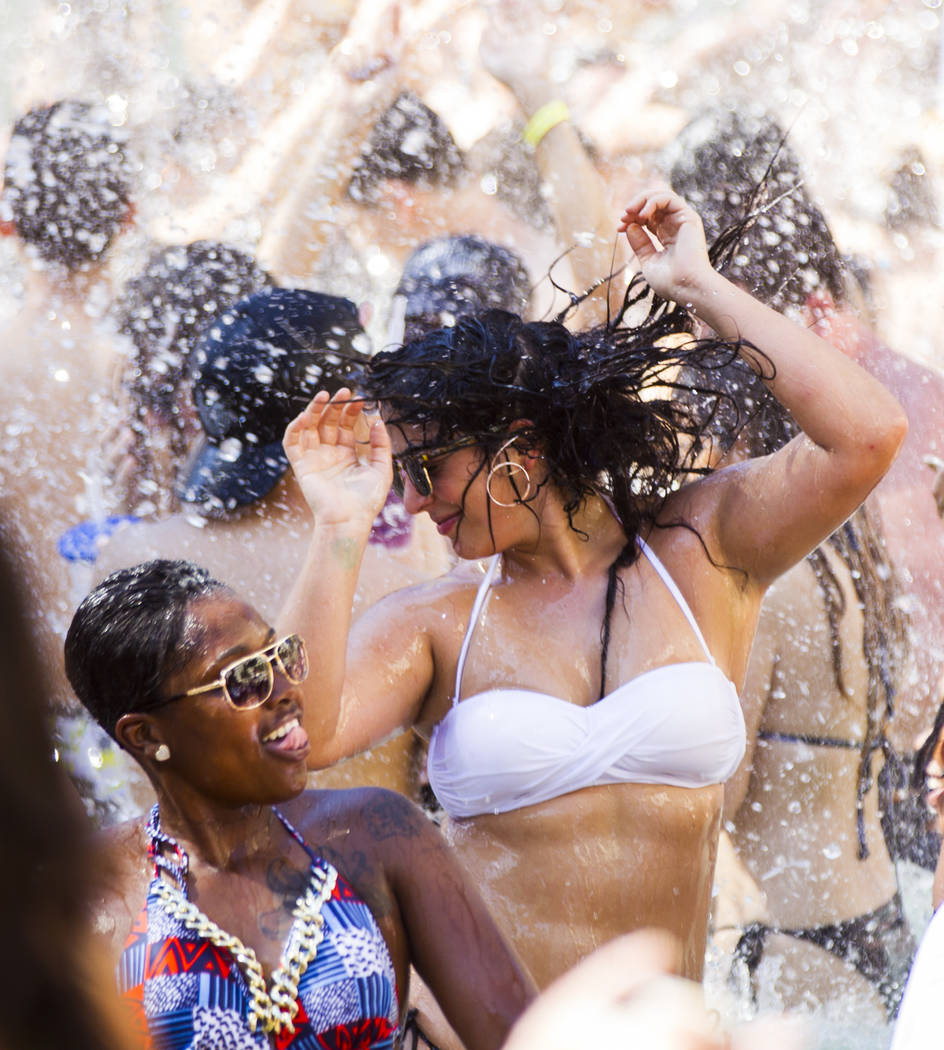 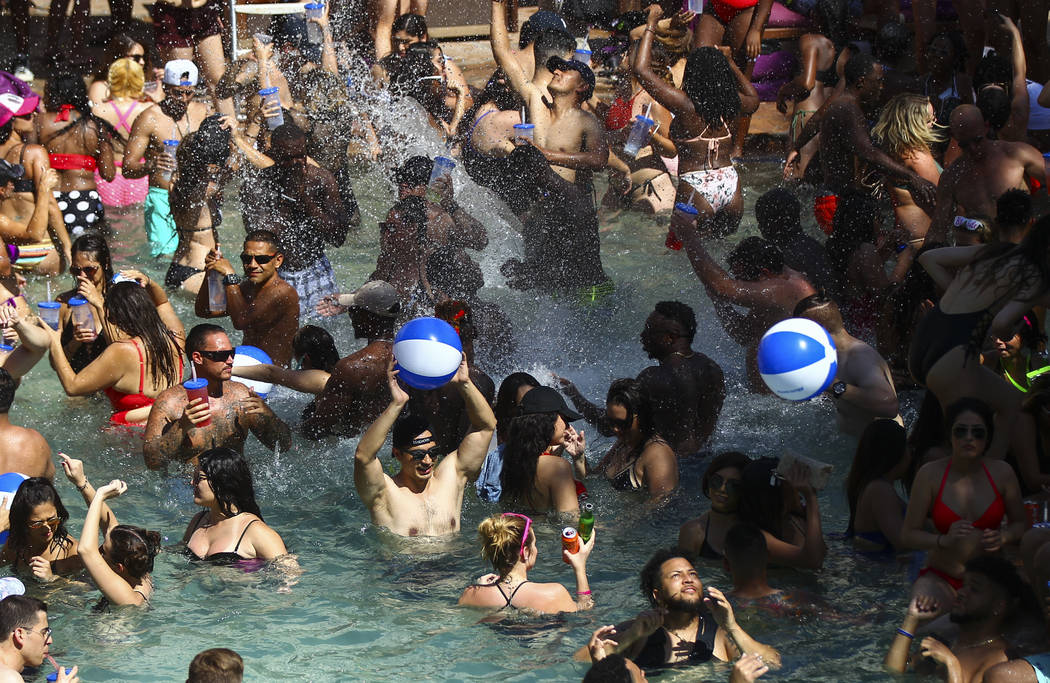 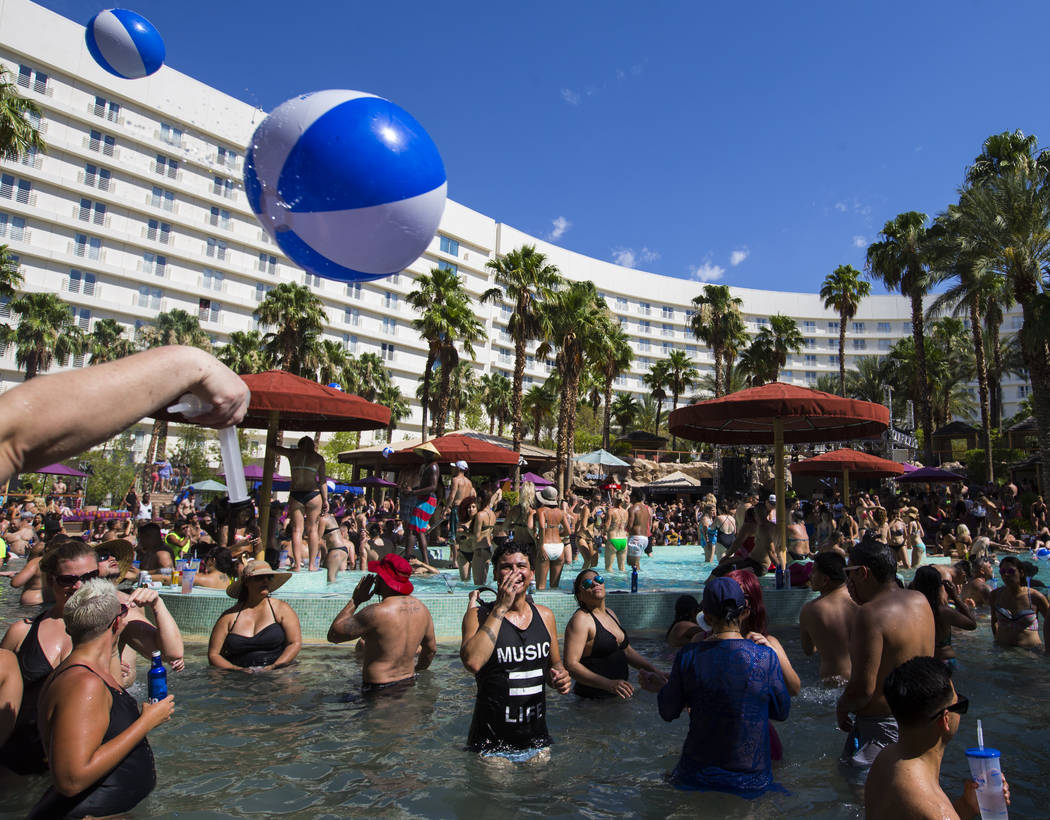 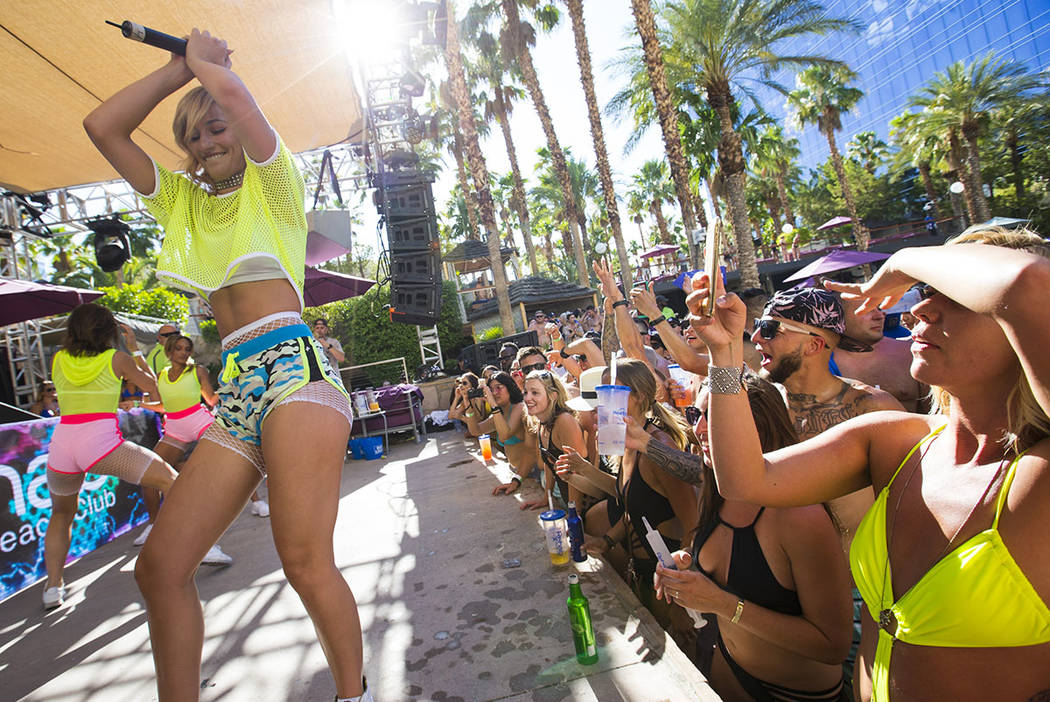 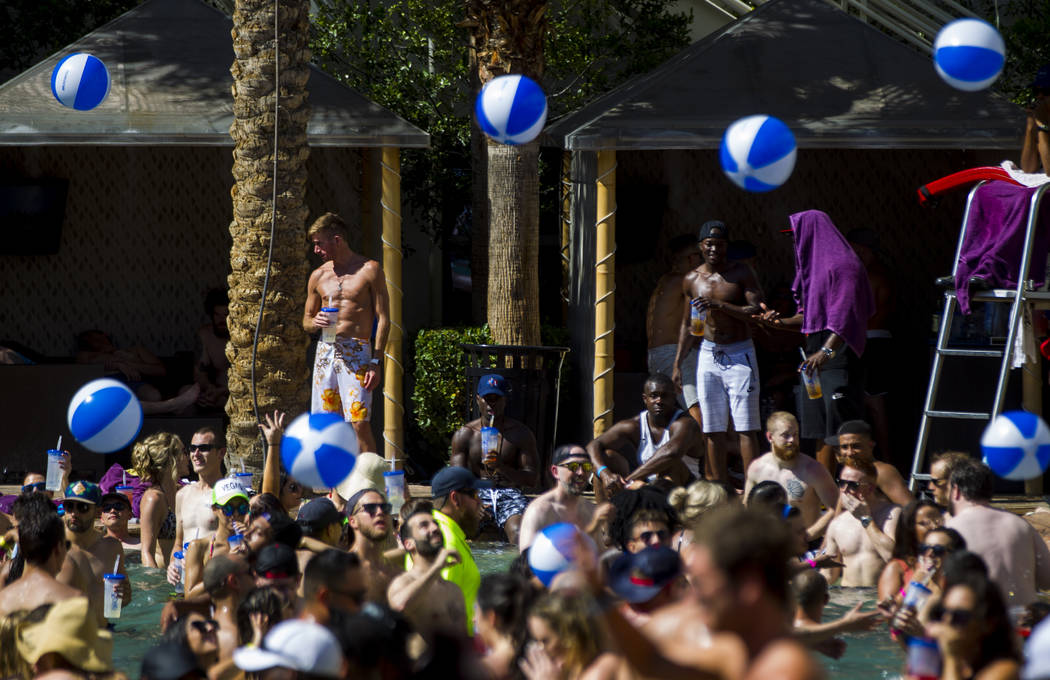 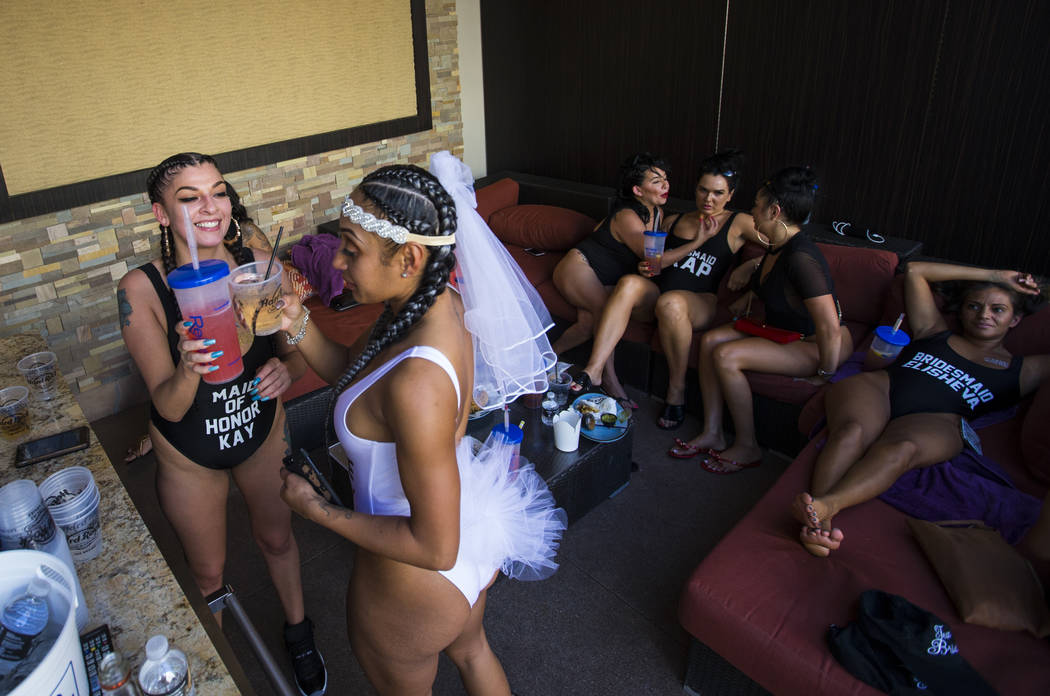 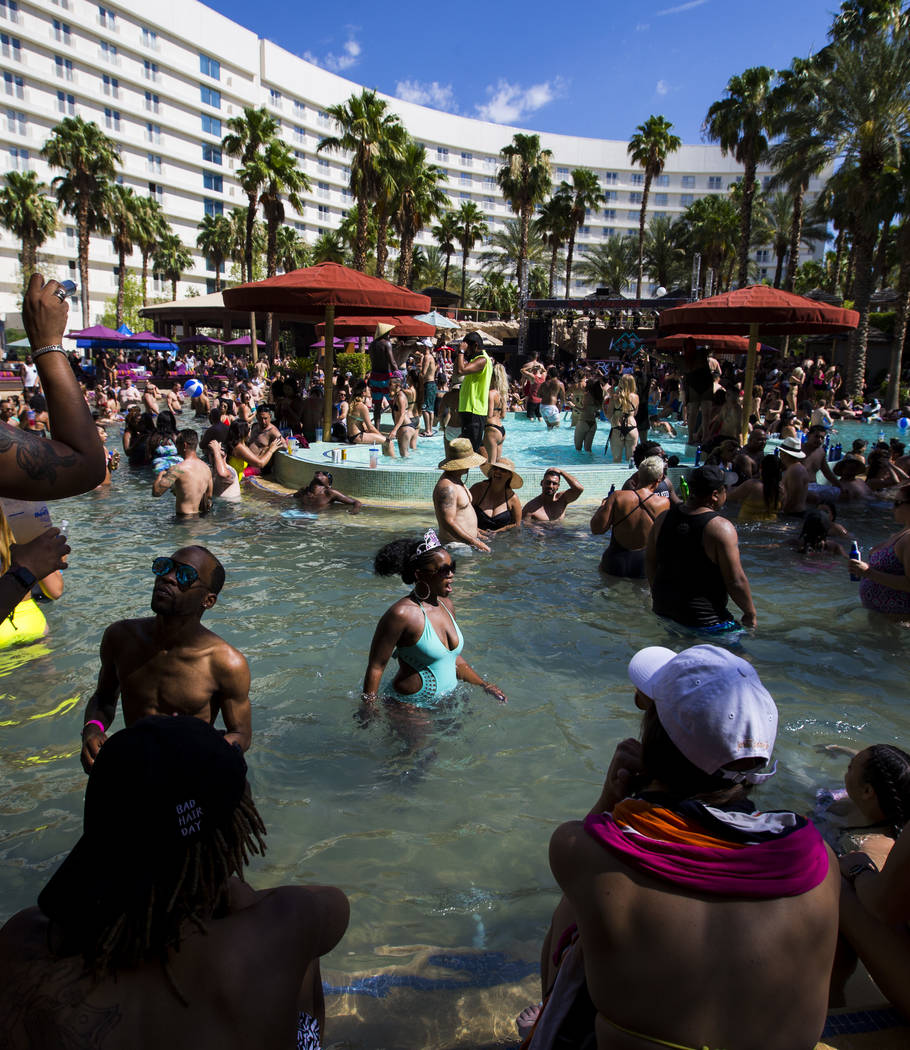 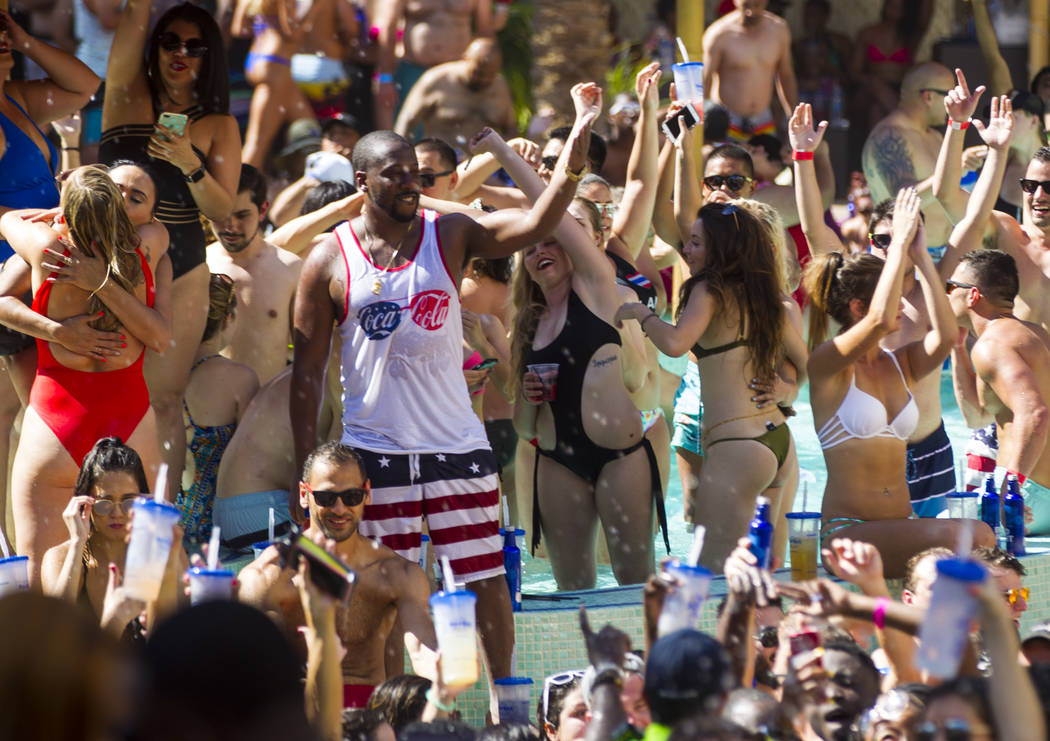 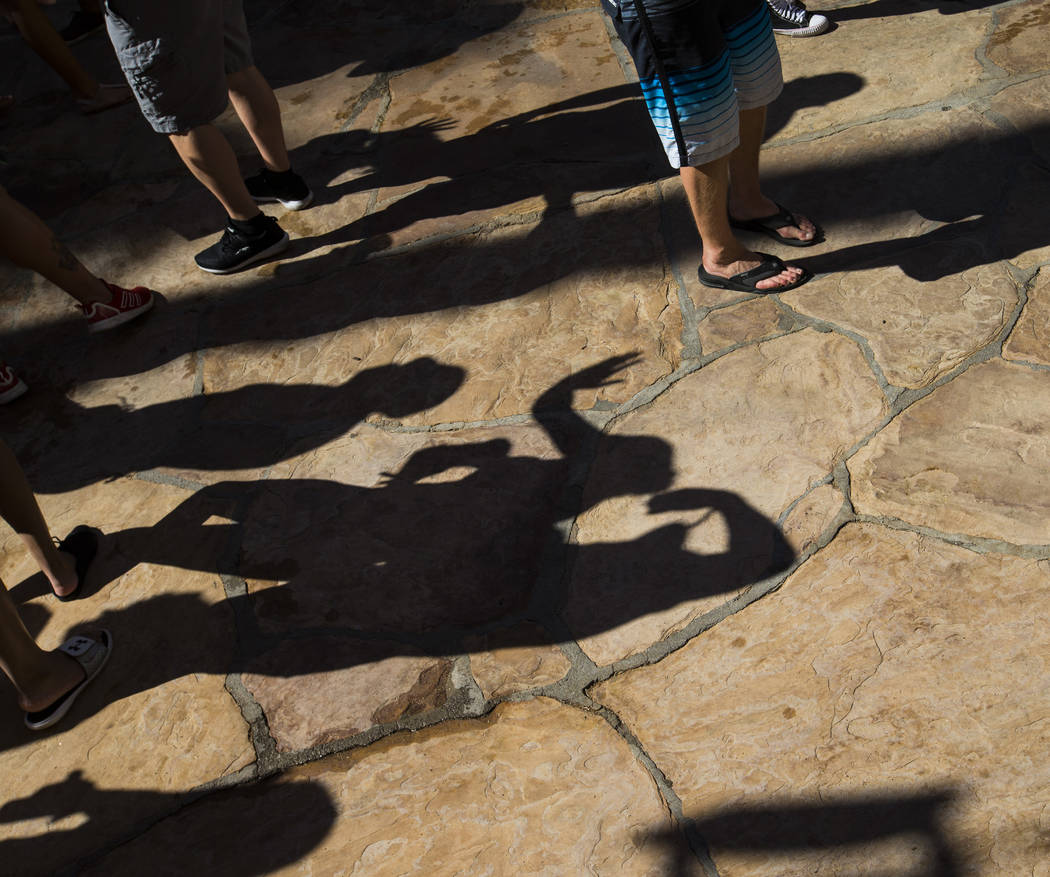 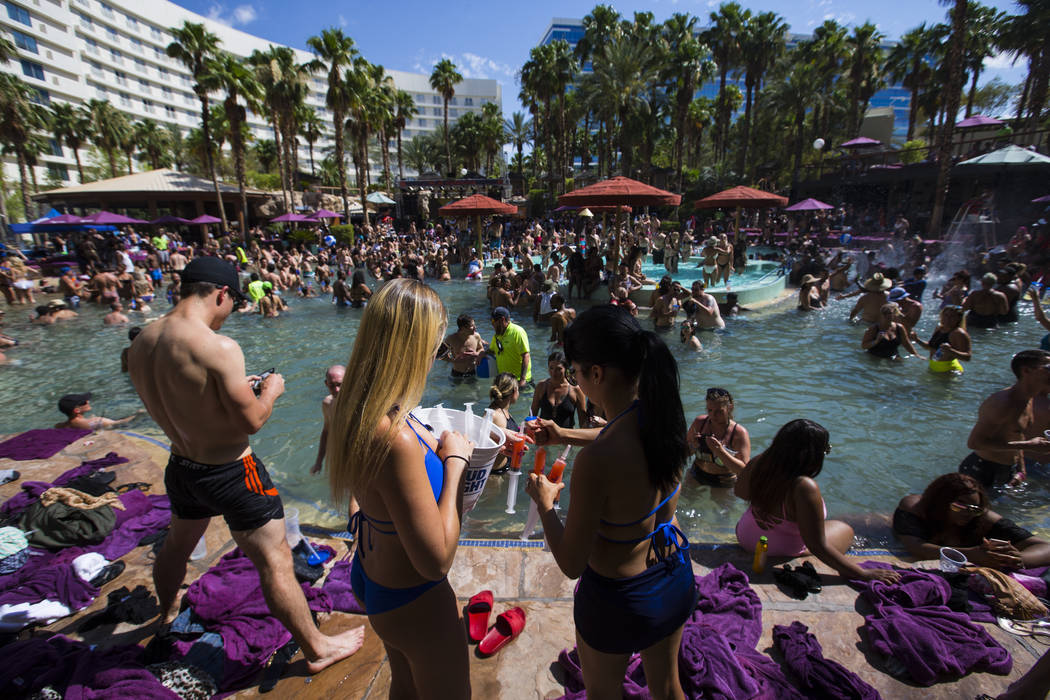 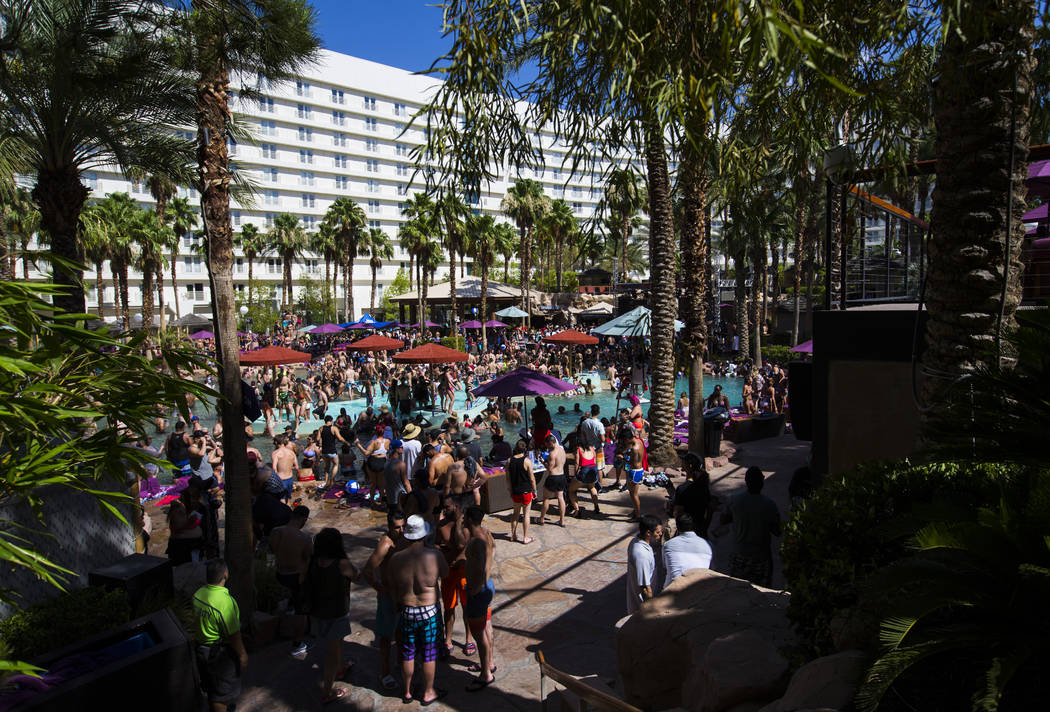 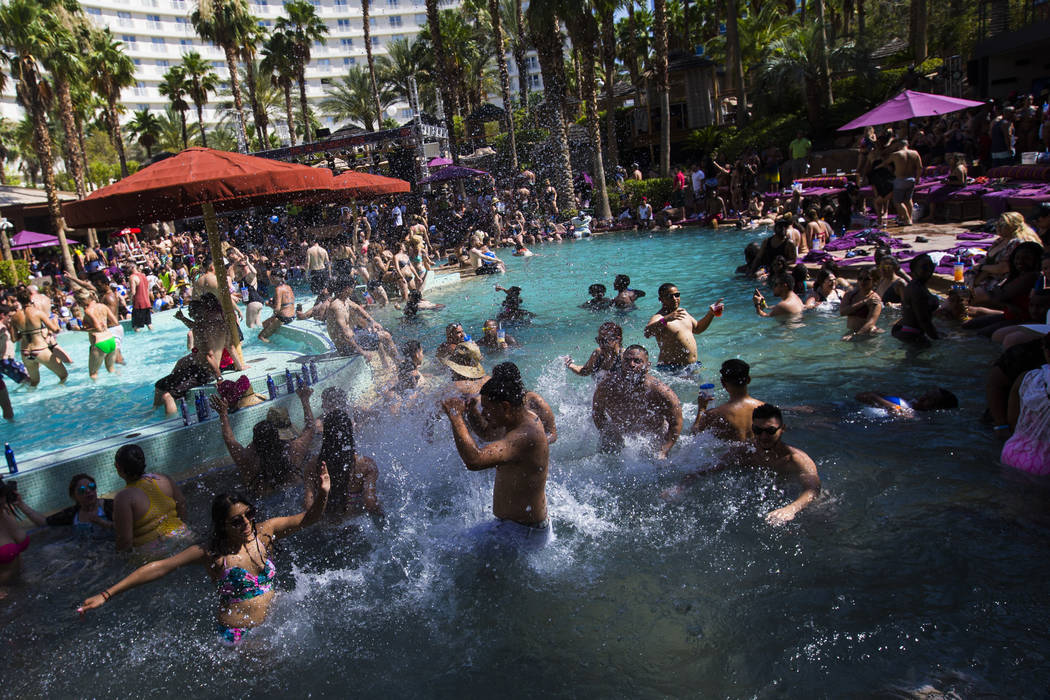 People splash and party in the pool at the Rehab dayclub at Hard Rock Hotel in Las Vegas on Saturday, June 24, 2017. (Chase Stevens/Las Vegas Review-Journal) @csstevensphoto 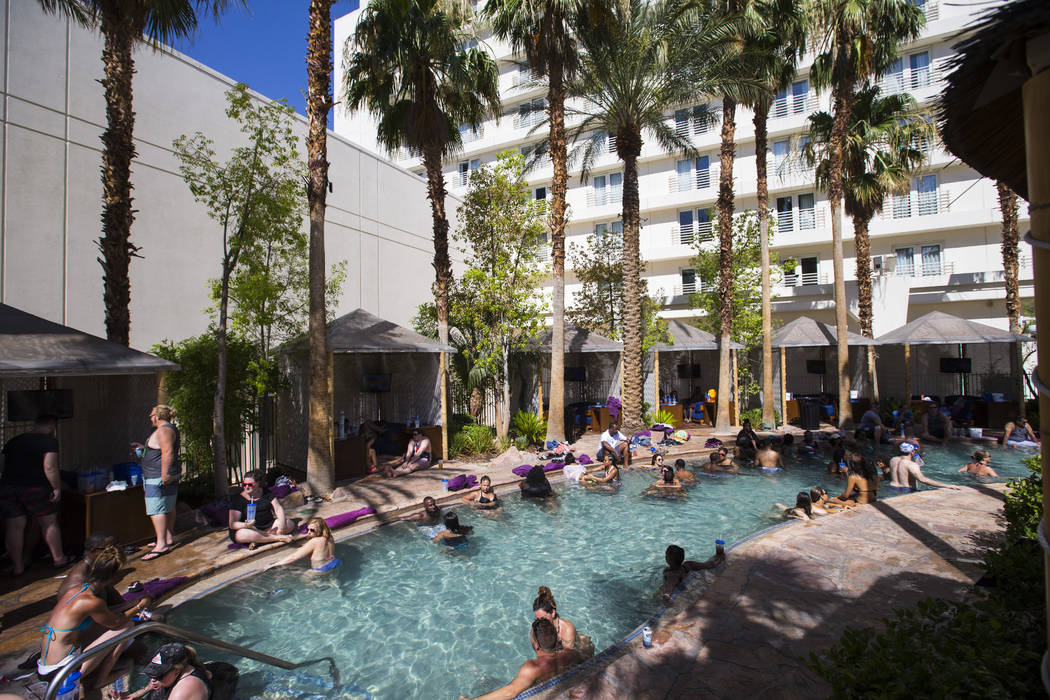 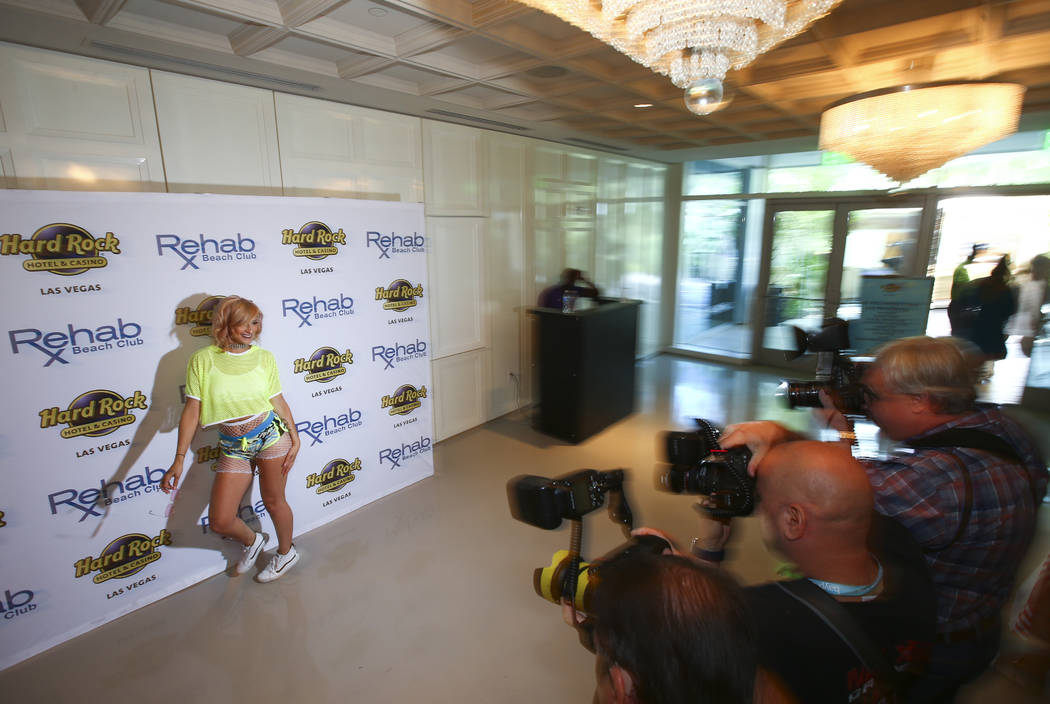 From his cabana at the Hard Rock Hotel’s Rehab pool, he could take in the entire scene: About 150 young men and women frolicking in the sun-drenched water, dancing and drinking to celebrate the start of their weekend.

By the bar, a half-dozen people played blackjack in the pool while others lounged in their cabanas to beat the heat.

Dozens of palm trees reaching high into the air encircled the pool, cutting it off from the rest of the world as Dee Jay Silver tracks drowned out the noise with tracks.

Hogg was lovin’ it.

“The atmosphere is amazing — palm trees, women, alcohol — you can’t beat it,’’ said Hogg as he began celebrating his 24th birthday on an early Friday afternoon with his brother Terrance and a friend. “This is the best birthday ever.’’

Joanna Guillen and Jorge Pina, Los Angeles newlyweds celebrating their new life together near the bar on the other side of the pool, agreed with Hogg’s enthusiasm.

“We never thought it’d be this good,” said Pina, as she relaxed in the pool with her husband under the waterfall near the Grotto bar.

The scene would nonetheless look dull compared with the following day, when performer P Diddy took the stage, filling Rehab with nearly 4,000 partygoers.

Nearly 10 years after dayclubs began to take Las Vegas by storm one hotel at a time, they still bedazzle guests like Hogg and Pina with their thumping music, flowing champagne and over-the-top energy.

Strip resorts have invested tens of millions over the years to transform hotel pools with lounge chairs into dayclubs with cabanas, bungalows, sand, dunk baths, LED screens, lighting systems, stages and top DJ talent to reel in visitors in by the thousands.

The growth of dayclubs has been a key element in transforming Las Vegas from a gambling capital to an overall entertainment destination. It has been instrumental in attracting a younger crowd to the city.

“People want to take part in their own experience,’’ said Joe Bravo, director of Rehab, one of the first beach clubs in Las Vegas. “A dayclub is a show starring you. That’s the draw.”

And visitors are willing to drop a bundle to be a star for a day, from $1,000 for champagne to as much as $7,000 for cabanas at the top clubs. Entrance fees can top $100 on busy weekends.

The city’s dayclubs pull in as much as $250 million a year in revenue despite operating only about half the year, according to estimates by two industry professionals.

“There is a huge dollar amount out there,’’ said Steve Sagan, general manager of the Flamingo dayclub Go Pool.

And the Flamingo wants its fair share of it.

The Flamingo hired Sagan in 2015 to transform a part of the hotel pool into a dayclub.

He has been booking local DJs through the week, adding bigger names and concerts on occasional weekends to attract larger crowds. Sagan plans to increase the number of concerts over the next two years.

Revenue has risen about 45 percent compared with 2014 and should reach double digits this year, Sagan said.

Wet Republic, Encore Beach Club, Drai’s at The Cromwell, Daylight at Mandalay Bay, the Marquee at The Cosmopolitan of Las Vegas and Rehab are among the city’s highest-grossing dayclubs.

Rehab’s Bravo first thought a pool party under the hot desert sun with the mercury hovering well above 100 would be a financial failure.

Before Rehab opened in 2003, visitors spent their daytime recovering after an evening filled with shows, gambling and partying. Others used the time to see sights in and around Las Vegas.

Now, people come to town to hang out at dayclubs with gambling and other entertainment a secondary activity. The dayclubs keep people spending large sums on the property.

The financial success of Las Vegas dayclubs has sprouted copycats around the country, from Austin, Texas, to Florida, Detroit and Scottsdale, Arizona, Bravo said.

“Not a day goes by that I hear someone else has opened a new pool party,” he said.

More people want to look their best by the poolside when they post selfies on Facebook, Instagram or Snapchat. That means sharper clothing and styled hair.

The big swimsuit trends last year were metal worked into the design, soft stones and exaggerated stitching, Pinal said. Before that, it was plenty of bright neon.

“Every year, it’s something new,” he said. “Every year it’s another layer added to the outfit.”

‘Window to the world’

To seize on the trend, MGM is working on an express service for dayclub visitors seeking blowouts, braids and manicures, Pinal said.

Pinal isn’t the only one hoping to capitalize on the situation. He said brands are constantly knocking on his door to get exposure to the pool and its visitors.

“At Vegas you’ve got a window to the world,” he said. “Your line is going to get noticed.”

If not by the people at the pool, then by the hundreds of thousands of social media followers. On Instagram, Wet Republic has 169,000 followers, and Drai’s has 145,000.

But building it doesn’t mean they will come. Nor are profits guaranteed. Costs for top international DJs playing electronic dance music eats up a large chunk of the revenue. Some industry observers say there is a tendency to look for other acts.

“EDM is not going anywhere anytime soon, but the clubs are making some adjustments to make it more profitable. A lot of the booking fees have gotten so out of control,’’ said Jack Colton, who has been running a website for the past decade dedicated to Las Vegas dayclubs and nightlife.

Dayclubs also require large staff, especially security and lifeguards, and plenty of insurance. Rehab has a total staff of up to 85 security guards, 50 lifeguards, 30 servers and 20 bartenders.

The Tropicana has tried several times to develop a profitable dayclub without sustained success. It closed down Bagettele in 2013. Last year, it took another shot with Sky Beach Club. The club is open this year only for private parties.

“It’s a major operation to run a pool club,” said Bravo, echoing the words of other beach club managers.

Clubs now need to find their niche rather than compete for the same high-end EDM crowd, Flamingo’s Sagan said. He is targeting crowds that stay in the hotel with a budget up to $3,000.

The Flamingo sees itself in the same dayclub tier as the Palms, which plans to remodel its pool as part of a large-scale upgrade of its resort.

With competition having grown over the years, dayclubs might need to up the excitement to stand out and attract clients to return again.

The Marquee at The Cosmopolitan has introduced winter daytime pool parties under a 106,000-pound dome structure that helps keep temperatures in the 80- to 90-degree range.

The dome ‘’will most likely return’’ for the 2017-2018 winter season, said Noah Tepperberg, partner at TAO Group, which manages the pool.

Rehab’s Bravo said dayclubs attempts to outdo each other reminds him when nightclubs tried to up the ante starting with wall walkers on bungee cords and other elaborate performances. He foresees a future in dayclubs when booking the right DJ isn’t enough to draw a crowd.

Sagan agrees there will always be someone pushing things to the next level.

“There is always going to be someone that thinks they can do it bigger and better.’’