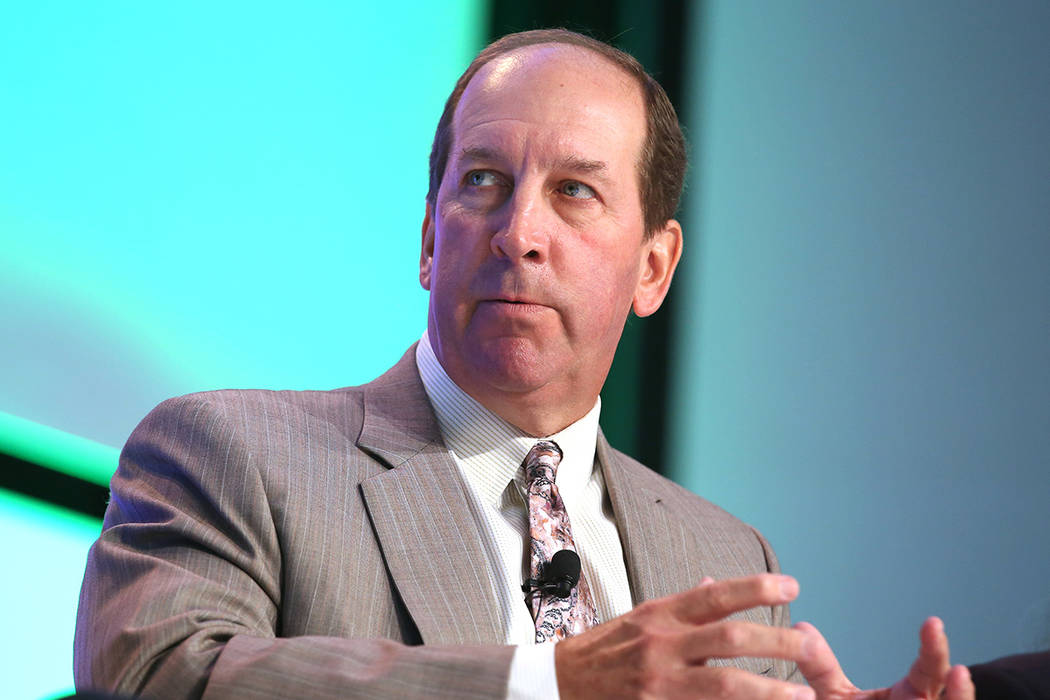 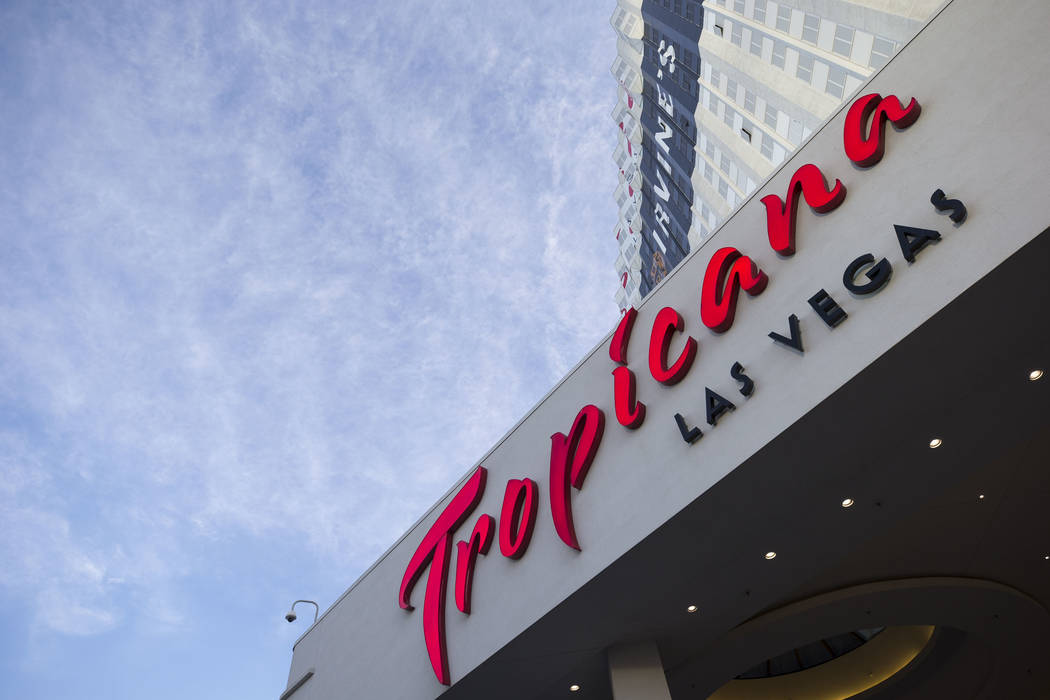 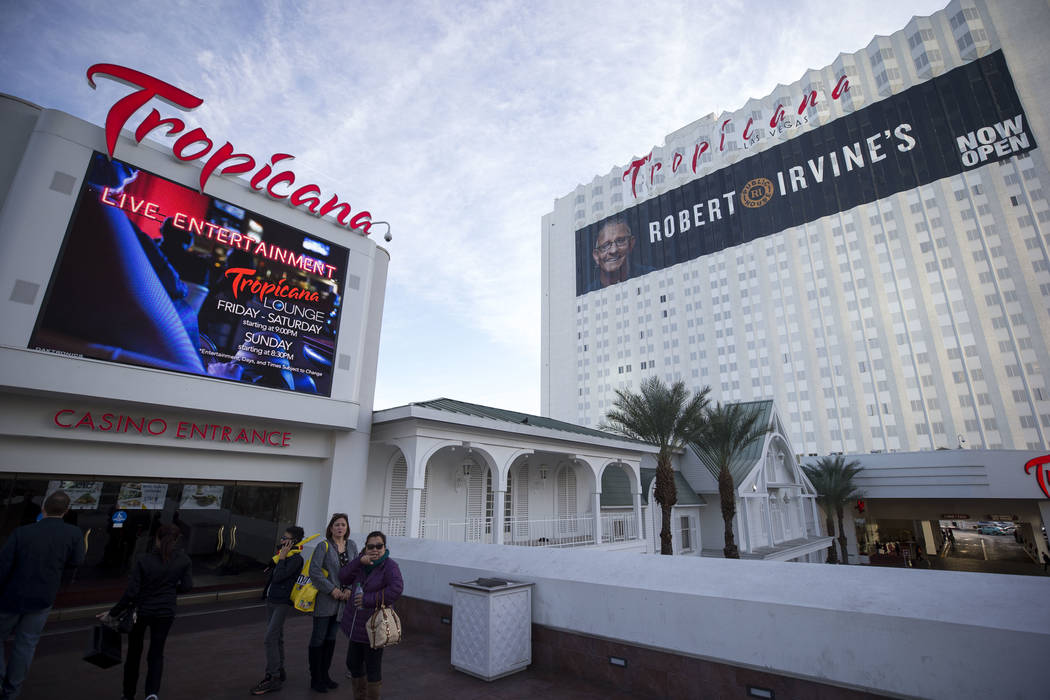 Operators of the 1,400-room Tropicana said Thursday they are evaluating unsolicited offers to buy the property or its real estate, but they added that a sale isn’t imminent.

Executives of Penn National Gaming Inc. said in their third-quarter earnings conference call that they have received offers for the Tropicana and for Prairie State Gaming, the company’s slot route company in Illinois, and they have considered deals to reduce debt faster.

“We have a couple of wholly owned, very valuable assets in our portfolio that we believe are not appropriately valued in our share price today, and there have been recent transactions, both in Las Vegas on the Strip as well as in the route operation business in Illinois, at very attractive multiples in both cases,” Chief Financial Officer B.J. Fair said in response to a question from an investor.

“We continue to receive some unsolicited interest in Prairie State Gaming, as well as some of the land holdings we have in Las Vegas at Tropicana, so we’re continuing to engage in those conversations,” he said. “We’ll see where they take us. We’re encouraged by some of those conversations, but nothing’s done until it’s done, but we would certainly consider, if anything were to materialize in either of those cases, to continue to delever faster than what we’ve laid out.”

After a follow-up question, Fair added that Penn’s willingness to sell the Tropicana doesn’t mean the company doesn’t recognize the value of having a Las Vegas Strip property.

“I would call it an evolution of our thought process,” he said. “It doesn’t mean that the hub-and-spoke model of the Las Vegas Strip with regional assets across the country is flawed. We don’t think it’s flawed. We think that it does still make sense.”

But Fair added that the expansion of gaming nationwide has allowed the company to re-evaluate the need for a Strip property.

“Given this conversion of interactive between sports betting and (internet) casinos, which is quickly proliferating across the country, we think that it’s going to be even more important for us to have a very localized on-channel approach where you’re engaging with guests both digitally as well as in brick-and-mortar casinos,” he said. “It doesn’t mean that the Las Vegas hub-and-spoke won’t work or isn’t working. It just means that we believe that we’re going to be very focused on moving customers around our network, and that’s going to happen at a more local level across our 40 properties in 19 different states and across the interactive activities that we’re offering our customers in markets where it’s legal.”

Two Las Vegas companies recently announced sales of properties while maintaining their management of casinos as a means of improving cash flow. Caesars Entertainment announced the sale of the Rio to Imperial Companies for $516.3 million, while MGM Resorts International is selling Bellagio to the Blackstone Group for $4.2 billion.

MGM indicated a similar real estate deal is in the works for the MGM Grand, with the sales of Aria and Vdara future possibilities.

Gaming analyst Joe Greff of New York-based J.P. Morgan said in a note to investors that a strategy to sell the Tropicana or the slot route company could ultimately increase Penn’s value.

“We view Penn’s monetizing assets and businesses like the Tropicana Las Vegas and its Prairie State Gaming slot business as major balance sheet catalysts that should help move the multiple higher,” he said.

Penn CEO Tim Wilmott, who plans to retire by the end of the year, said in an earnings release that the company has capitalized on the opening of sports books in Iowa, Indiana and Pennsylvania and the launch of a mobile sports-betting app in West Virginia by one of its partners.

Boosted by the expansion of sports wagering nationwide with new properties, Penn said Thursday that its third-quarter revenue grew 71.6 percent to $1.355 billion, and net income grew 21.1 percent to $43.7 million, or 38 cents a share.

Wyomissing, Pennsylvania-based Penn, which also operates the M Resort in Henderson, saw revenue and earnings grow as a result of the completion of its $300 million acquisition of the Greektown hotel-casino in Detroit in May.

But the company still failed to meet analysts’ expectations of $1.37 billion in revenue and earnings of 42 cents a share.

The company also said revenue fell more than expected at its Plainridge Park Casino in Massachusetts as a result of the opening of Wynn Resorts Ltd.’s Encore Boston Harbor.

Plainridge Park is less than 40 miles from the Wynn property that opened in June and both companies draw customers from the Boston area.

Penn shares, traded on the Nasdaq exchange, were down 53 cents, or 2.5 percent, to $21.32 on below-average volume. Shares were unchanged in after-hours trading.