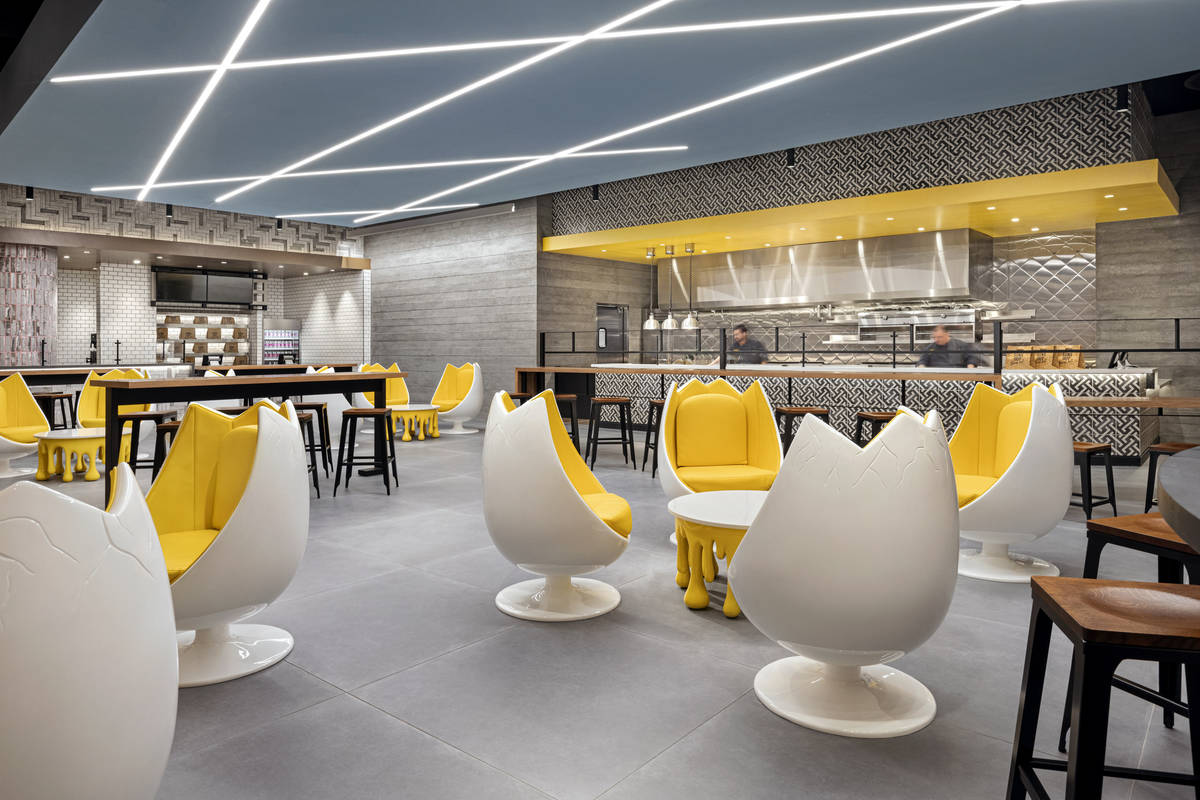 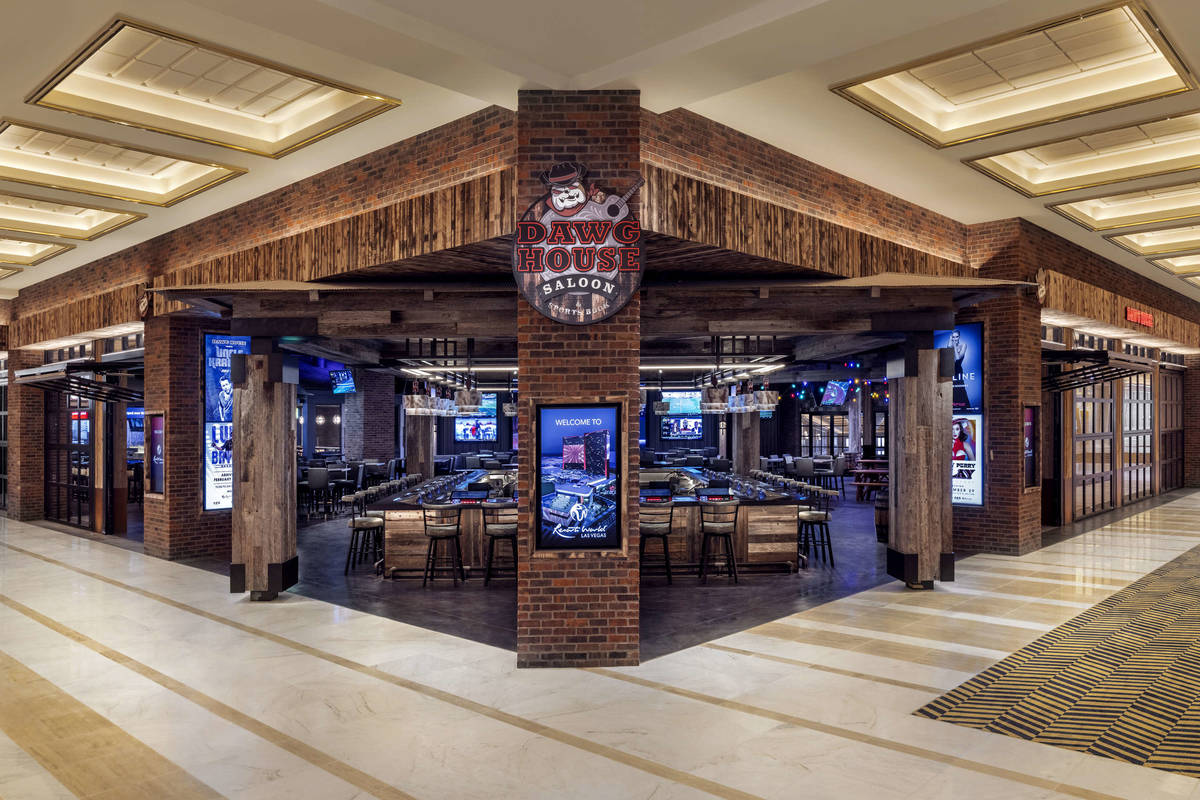 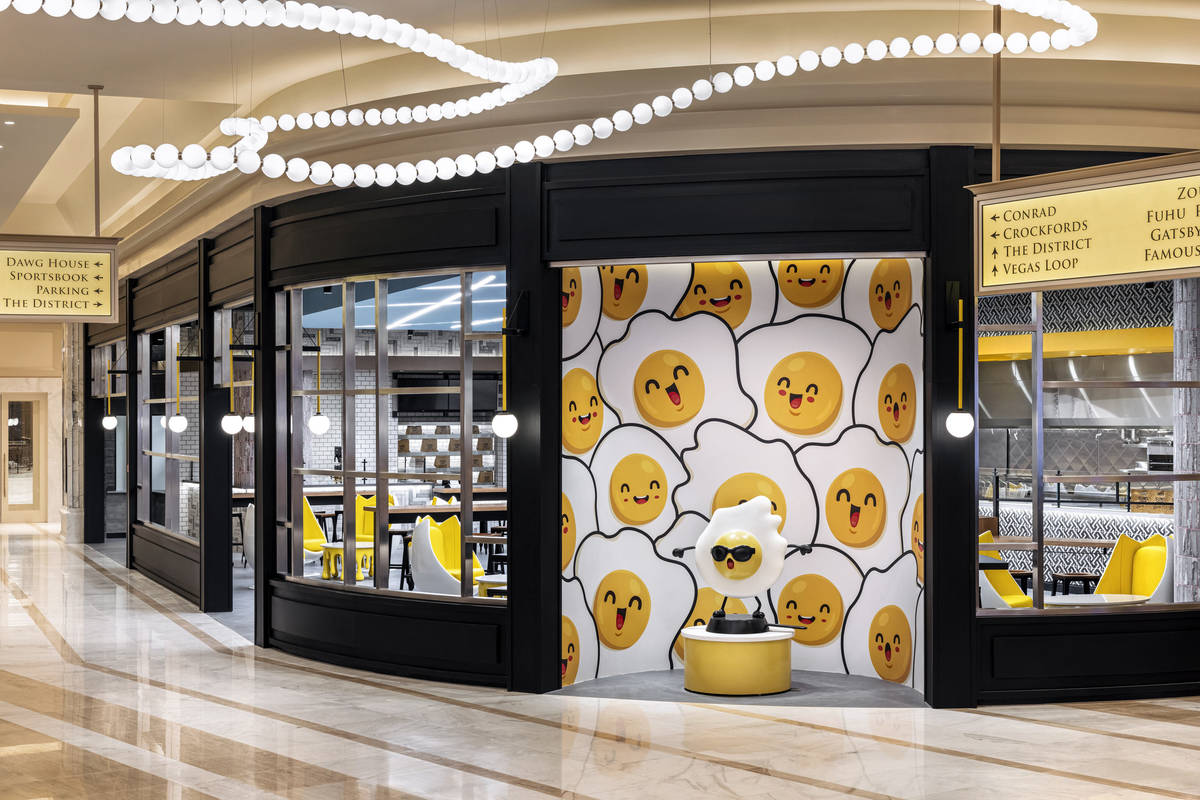 When it comes to their more than 40 food and beverage outlets, Resorts World executives seem to have two goals in mind: to offer something to appeal to almost any palate and pocketbook, and to make getting food and drink from their outlets to guests’ mouths as easy as possible.

During a Tuesday morning media sneak peek of the resort, president Scott Sibella stressed the diversity of the desired demographic.

“We’re going after all types of customers,” he said. Thus, there’s the Genting Palace, which will serve high-end Cantonese food and dim sum in a serene space where retro circular booths are upholstered in cerulean green. With an imposing entrance to the dining room and another through the lounge area, this restaurant modeled on a Genting classic is one executives hope will eventually reach four- or five-star status.

Then there’s Famous Foods Street Eats, a sprawling space with restaurant windows lining the walls around a dining area filled with dozens of tables (plus more on the patio). And if the configuration brings to mind a mall food court, the similarities end there. The customary chain outlets have been replaced by an array that covers Filipino, Japanese, South Indian, Singaporean and Texas barbecue with “the occasional Chinese and Vietnamese twist.” While the fare has been chosen to be approachable and affordable, Andrew Li, CEO of its developer, Zouk Group, said it’s notably representative of authentically Asian street food.

Famous Foods is across from Dawg House Saloon & Sportsbook, bringing a Nashville-style sports bar and, for those in search of even more comfort, the tucked-in-a-corner Mouse House with its gourmet grilled cheese. Famous Foods and the Dawg House are near the south entrance for easy access.

The outlet that is said to best represent the Resorts World mission related to food and beverage is Wally’s Wine & Spirits, a two-story structure faced in dark wood and occupying a prominent spot in the resort’s The District restaurant and retail area, which is accessible from Las Vegas Boulevard. Near the soaring multimedia centerpiece The Globe and the entrance to the Boring Co.’s underground people-mover system, Wally’s will be a wine shop with a gourmet market, as well as full-service dining.

At the other end of The District is Brezza, a modern Italian concept from longtime local chef Nicole Brisson and her business partner Jason Rocheleau. Closer to the center is ¡Viva! from Esquire magazine chef of the year Ray Garcia, its facade decorated with colorful murals and accents of wood and rope.

Crockfords — the most elite of the property’s three hotels from Hilton — is introducing Tea in the Living Room in its aptly named, comfortably appointed lobby area, with two seatings from 1 to 5 p.m. daily. The tea will be available to the public.

Other food and beverage outlets dot the property, including Sun’s Out Buns Out, the mission of which is illustrated by its eggshell-shaped chairs, and the Agave Bar and Grill, a Mediterranean full-service restaurant in the pool area.

But perhaps most notable is what executives are calling “room service on your phone,” an app that enables guests to order from any of the resort’s restaurants, from anywhere on the property.