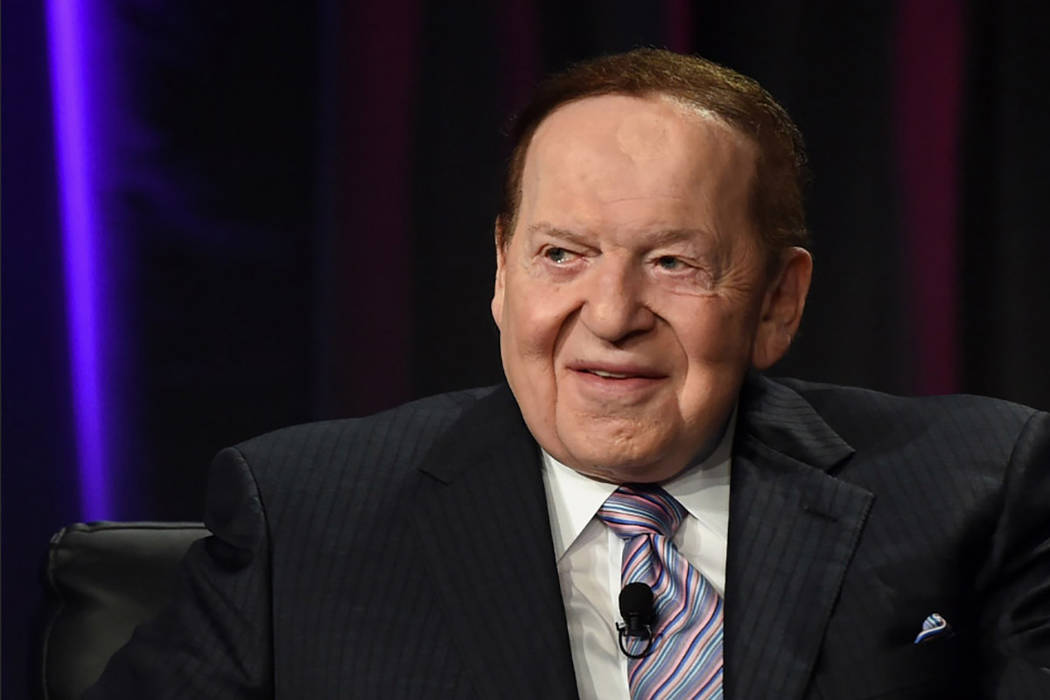 Las Vegas Sands Corp. Chairman and CEO Sheldon Adelson on Wednesday participated in his first earnings call of the year after missing previous briefings because of treatment for non-Hodgkin lymphoma.

Adelson told analysts listening to the company’s third-quarter call that he was happy to be back so that he could share news about an increase in shareholder dividends the company has planned for 2020. The company had announced in February that Adelson was dealing with side effects from medication he was taking for the treatment of the disease.

During the call, the company noted that it missed analysts’ third-quarter revenue and earnings projections, and also detailed its development timeline for Macao and Singapore.

Sands revenue, net income and earnings per share fell by single-digit percentages compared to the third quarter of 2018 with the decline attributed to no longer having a revenue stream after the sale of its Sands Bethlehem property in Pennsylvania to an affiliate of Alabama’s Poarch Band of Creek Indians for $1.3 billion. That deal closed in March.

Sands Bethlehem accounted for net revenue of about $138 million in the third quarter of 2018.

The company had mixed results by property in the quarter that ended Sept. 30 with net revenue up in Las Vegas, Singapore’s Marina Bay Sands and the Sands and Plaza-Four Seasons properties in Macao, but down at Sands Cotai Central, the Venetian Macao and the Parisian in Macao.

A survey of analysts had projected an average earnings per share of 75 cents and revenue of $3.28 billion.

The company paid a 77-cent-per-share dividend for the quarter and the company’s board of directors authorized an 8-cent increase in the annual dividend for 2020 to 79 cents per quarter.

Officials also highlighted the company’s investment timeline in Macao. About 290 new suites in the Grand Suites at Four Seasons Macao will come online in mid-2020 and 370 new suites in the Londoner Tower Suites in late 2020. The rethemed Londoner Macao will add a third European-themed destination resort with additional lodging, retail and entertainment with phased openings throughout 2020 and 2021.When completed, Sands will own a dominant 45 percent market share of the 29,000 rooms operated by casino companies in Macao.

In April, the company announced a $3.3 billion investment in nongaming amenities in Singapore with development of a 15,000-seat arena and a 1,000-suite luxury tower next door to its Marina Bay Sands property.

Sands officials also learned that a casino exclusivity agreement in Singapore between the government and Sands and the Genting Group, operators of the other Singapore casino resort, was extended to the end of 2030.

’Best days of Las Vegas are ahead’

“We keep focusing on the room product, the suite product, more attractions, more (food and beverage),” Goldstein said. “I’m very pleased where our casino’s going. We’ve seen nice baccarat play throughout the year. It was a soft quarter relative to the previous, but the mass and premium mass growth opportunities are here. It’s a lodging dominant market and will continue to be.

“Vegas was gaming-centric when I started and now it’s lodging-centric and the guy sitting next to me (Adelson) had a lot to do with that. The best days of Las Vegas are ahead of us as more MICE space (meetings, incentives, conferences and exhibitions) comes to the market, as more things happen here. We welcome the competition and welcome all the wonderful things that are happening all over town. I don’t think you can focus on Vegas gaming for a quarter or for a week or for a month and get too excited either way. It’s going to be a steady drawing to a better place.”

Goldstein said the days of Las Vegas attracting top players from Asia may be over as a result of improvements in Macao.

“I don’t think you’ll see as much Asian play in Las Vegas,” Goldstein said, “because the options in Asia are so damn good. We still see great players show up occasionally, but the days of us dominating Asian play are over and the days of Vegas becoming the greatest lodging market in the world are here. We want to be part of that transitional shift and Sheldon (Adelson) authored it 20 years ago with his convention-based focus.”