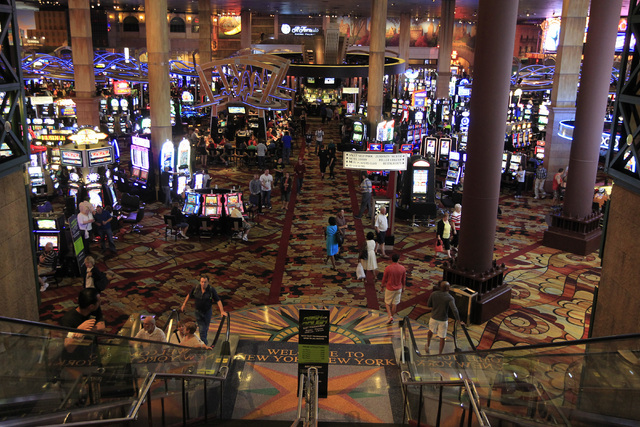 CARSON CITY — Sports betting remains a bright spot in Nevada’s otherwise lackluster gaming win in April, with $292.3 million wagered on basketball, hockey, baseball and other events — a record for the month, the Gaming Control Board reported Thursday.

Nevada casinos have seen an increase in sports wagering in 32 of the last 36 months, said Michael Lawton, a senior research analyst for the agency.

Sports pools won $13.5 million from bettors in April, a nearly 70 percent increase over the same month in 2015, the monthly revenue report showed.

“Sports betting is a bright spot in what we are seeing in the gaming numbers,” Lawton said.

John DeCree, the senior research analyst at Union Gaming covering the Las Vegas market, said the sports book trends remain strong. For the year to date through April, sports wagering on the Strip is up 16 percent over the same period in the previous year.

“Mobile betting apps are a key driver of the increased wagers, which make it easier for people to place bets,” he said. “The rise of fantasy sports has attracted a larger pull for sports betting as well. In addition, the expansion of in-game and proposition wagering is all driving higher sports book volumes.”

April was also a big event month for Las Vegas, in large part because of the opening of the T-Mobile Arena on April 6. A number of performers, including George Strait, Guns N’ Roses and Billy Joel, played at the venue last month.

There was also a Manny Pacquiao fight, a UFC event, the opening of the new Intrigue nightclub at Wynn Las Vegas and two Rihanna shows at the Mandalay Bay Events Center, among others.

Although Nevada casinos saw a slight 2.44 percent decline in overall statewide gaming win in April, one reason was that the month ended on a Saturday, meaning that some of the winnings from wagers at the end of the month won’t be counted until May, he said.

Baccarat was another bright spot in the April report, with a total of win $104.9 million for a 9.9 percent increase over April 2015. The volume of play was soft, but the hold was unusually high at 17.77 percent, Lawton said. The average hold for the past 12 months is 13.1 percent, so it was significantly higher in April, he said.

Baccarat has seen win amounts increase in only four of the past 12 months, Lawton said.

DeCree said April gaming revenue on the Strip were a little softer than anticipated given the month had two extra weekend days compared with April 2015 and considering how strong the events calendar was in the month.

“The slot play in the month looked fine, but the table volumes (excluding baccarat) were a little lighter than we had anticipated,” he said. “Given some of the new amenities that opened in the month on the Strip, like the T-Mobile Arena and The Park, nongaming may have grabbed a greater share of tourist dollars, which could explain some of the softer gaming volumes.”

One of the few bright spots in Clark County was Mesquite with a 7.9 percent gain to $11.1 million.

The story was different in the north, where Washoe County reported a 15.47 percent gain in April to $66.2 million. Every market in the county was up.