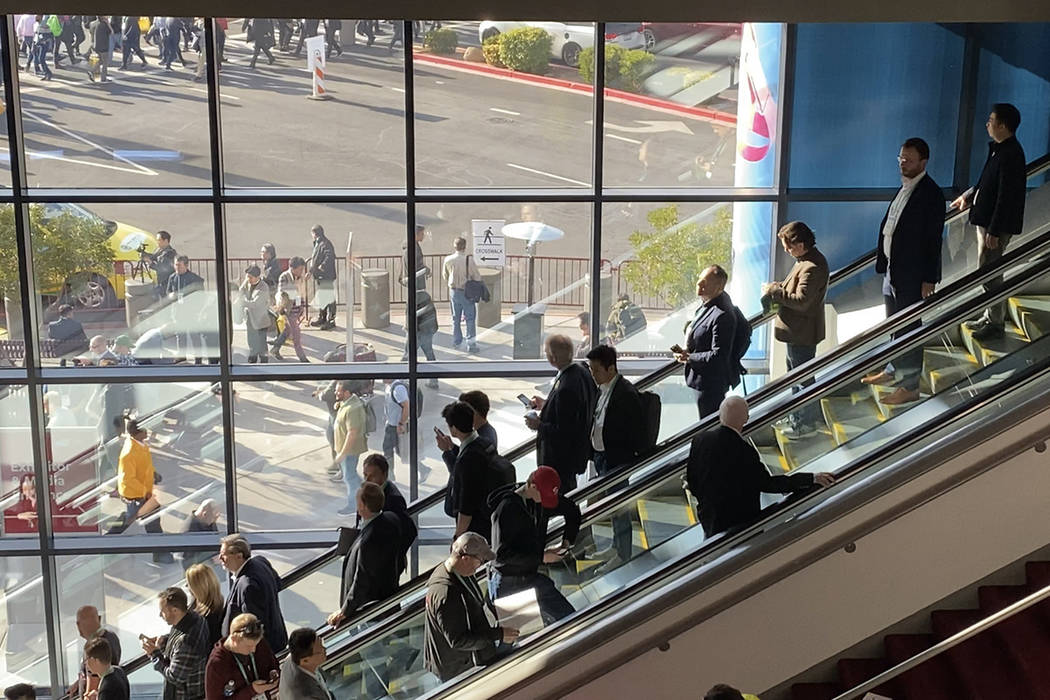 CES 2020 conventiongoers navigate their way in and around the south hall of the Las Vegas Convention Center on Jan. 9, 2020. (Mick Akers/Las Vegas Review-Journal)

The 170,000 people attending CES 2020 who traipsed between the three main expo halls at the Las Vegas Convention Center should be forewarned that next year they’ll see another area come on line after the convention center expansion wraps up.

The $980.3 million expansion will add 1.4 million-square-feet, making the distance between the south hall and the expansion hall almost 1.5 miles.

Looking to take some of the pain out of navigating what will be 4.6-million-square-feet of convention space — the second largest conference facility in North America — the Elon Musk-owned The Boring Co. is constructing an underground people mover system beneath the convention center.

The loop will turn an estimated 15 minute walk into a 1-minute ride, with conventiongoers traveling in one of three Tesla model vehicles that can carry up to 16 people each. The cars are slated to operate autonomously in the tunnel.

Las Vegas Convention and Visitors Authority CEO Steve Hill said this week the loop is on track to open for CES 2021.

Conventiongoers overheard commenting on the number of steps they racked up each day at CES said they will welcome the new way to travel around the convention center.

“(I’ve taken) at least 10,000,” said Las Vegan Maureen Polster. “I think the (loop) system is amazing. I think everyone who attends the show will benefit from that. I think it’s an amazing development for our city.”

Some attendees are happy with how they can get around the convention center today, but are still intrigued by the Boring Co. project.

“They have a good transportation system in place. They have golf carts between the halls and the walking I don’t find too onerous, and it’s a pretty good experience,” said Brian Yott of Ontario, Canada. “It’s a lot of walking, these shows are. I mean that’s part of it, but I think they minimize it and make it easier to get from location to location.”

Yott said he’ll ride the Boring Co. loop at least once next time he attends CES, but isn’t sure if he’ll ride it regularly.

William Moore from San Jose said he was prepared for the long walks he undertook, racking up 22,000 steps Wednesday while navigating around the convention center. But he said the addition of the tunnel will be a good thing.

“Feet are doing good,” Moore said. “I’ve got the gel soles in the shoes and all of that.”

If the convention loop proves useful and efficient, plans call for extending the tunnel system into the resort corridor, offering a new mass transit mode around the popular tourist zone.

Moore used the monorail to travel from his hotel to the convention center and is interested in whether the Boring Co. model will extend into the Strip area as hoped by developers.

If it does, Moore will reserve judgment on which mode he likes better — above or below ground.

“I would go underground once to see and then I’d have a comparison,” he said. “I couldn’t answer that yet, but either one, whatever is convenient.”