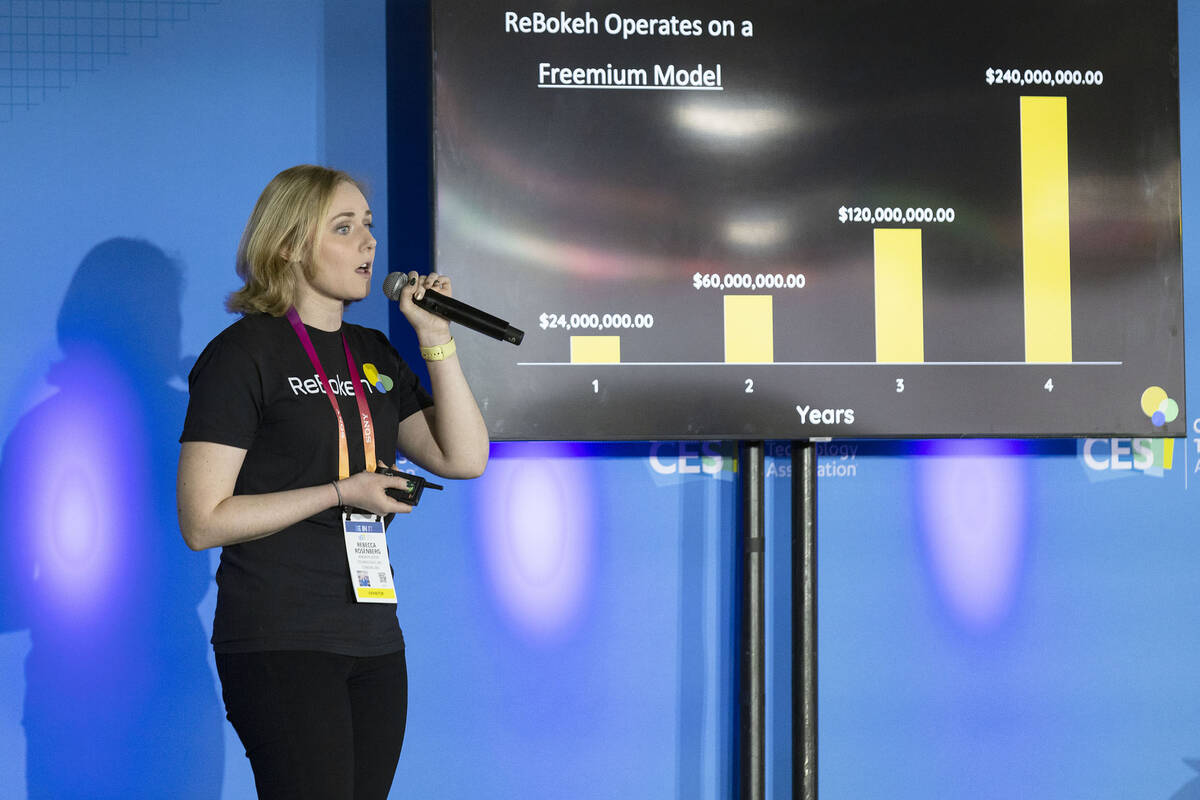 Rebecca Rosenberg, CEO and founder of ReBokeh, speaks about ReBokeh, a medical technology startup working to develop assistive technologies for people with low vision, during the CTA annual pitch competition at the CES 2023, on Friday, Jan. 6, 2022, at the Bellagio Las Vegas. ReBokeh Vision Technologies won for its vision enhancement technology that offers a filtering system to clarify sight of people with rare eye conditions and disorders. (Bizuayehu Tesfaye Las Vegas Review-Journal) @btesfaye 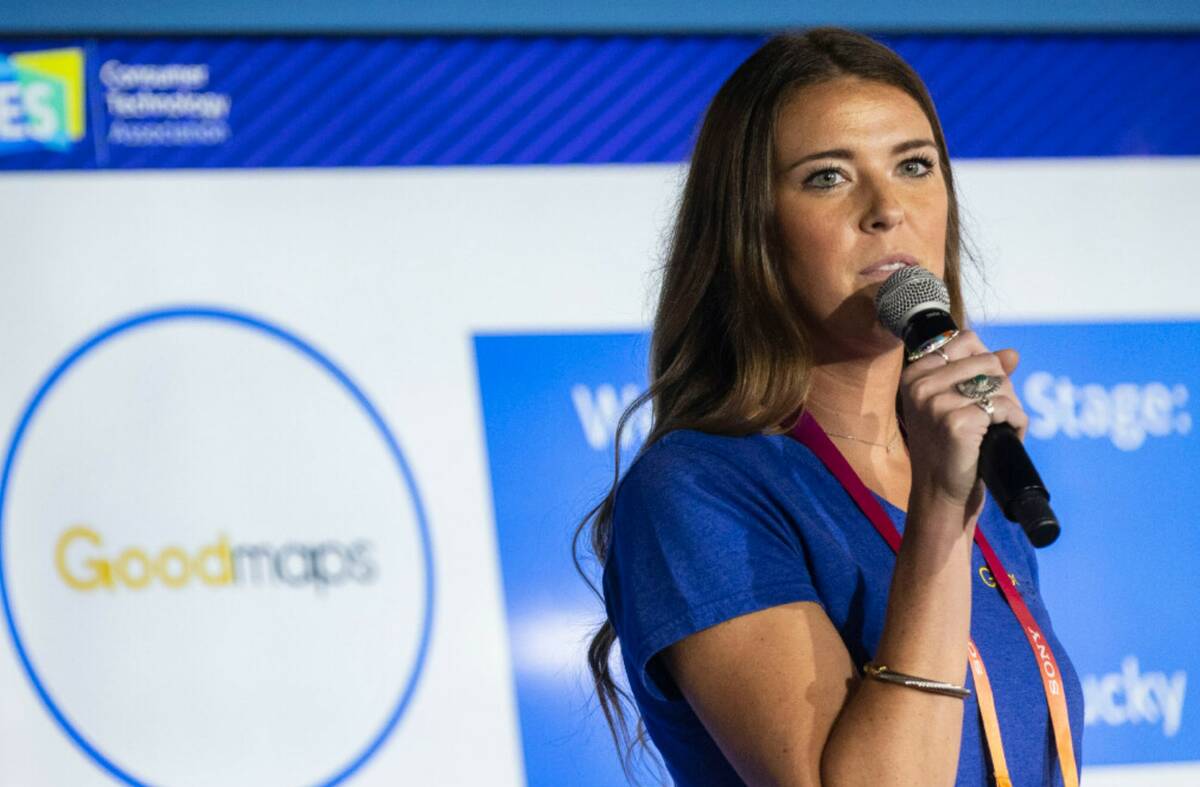 Judges choice winner Evelyn Tichenor, Chief of Staff of GoodMaps, talks about GoodMaps during the CTA annual pitch competition at the CES 2023, on Friday, Jan. 6, 2022, at the Bellagio Las Vegas. GoodMaps Studio can create highly accurate digital maps that rely on camera positioning to navigate users through spaces without the need for infrastructure. (Bizuayehu Tesfaye Las Vegas Review-Journal) @btesfaye 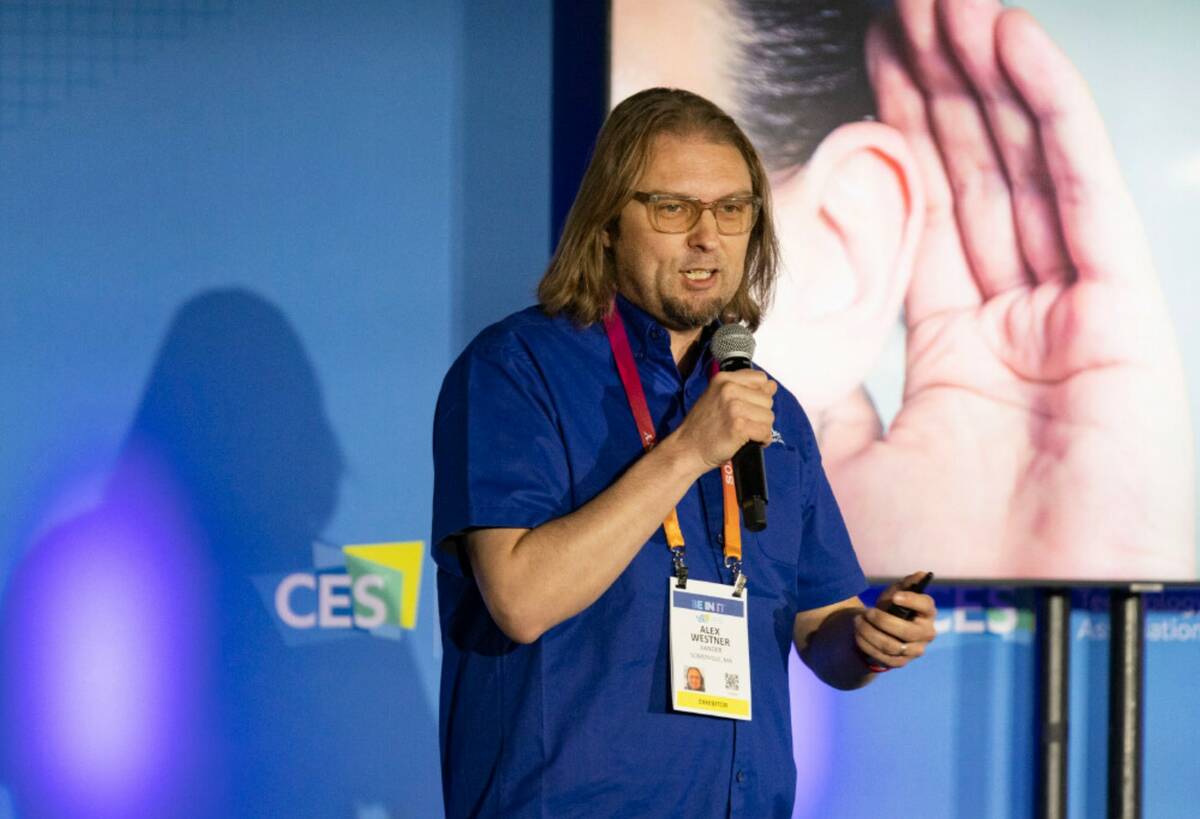 Audiences survey prize winner Alex Westner, CEO of XanderGlasses, during the CTA annual pitch competition at the CES 2023, on Friday, Jan. 6, 2022, at the Bellagio in Las Vegas. Xander designed smart glasses to help hearing-impaired and with hearing loss to understand others' speech and to be more confident in conversations. (Bizuayehu Tesfaye Las Vegas Review-Journal) @btesfaye

Roughly 100 people were watching the event at Eureka Park, an exhibit area dedicated to startups inside The Venetian Expo.

“GoodMaps creates apps, free of charge to the user like a person who is blind or first responder, that allow the user to actually use the map,” GoodMaps Vice President of Sales and Partnerships Evelyn Tichenor said in her pitch.

Xander, developer of XanderGlasses, a device for the hearing-impaired that provides closed-captioning on a screen within the lenses of a pair of glasses, was the favorite product among attendees watching the presentations.

Nine companies gave five-minute product pitches and answered questions from a panel of three judges, who deliberated on which gadget was the most worthy of the $3,000 prize. Separately, the foundation set up an online polling system allowing spectators to select the “audience’s choice” winner, who receives $2,000.

When making the prize presentations, CTA Foundation Executive Director Stephen Ewell offered a surprise announcement — a second-place award of $2,000 to ReBokeh Vision Technologies for its vision enhancement technology that offers a filtering system to clarify sight of people with rare eye conditions and disorders.

The foundation awarded the prizes to companies that have less than $1 million in annual revenue and have raised less than $30 million in investments. To be eligible for the competition, a company had to be a CES 2023 exhibitor.

While the competition is geared primarily toward products that help people with disabilities, some pitched products designed to enhance a person’s mobility with wearable technology and another was geared toward recreation. A company called Ohm’s Quest offered a screen-free escape room game that could be played like a table board game with family members and friends.

This story has been updated to identify GoodMaps Vice President of Sales and Partnerships Evelyn Tichenor as the company’s presenter. 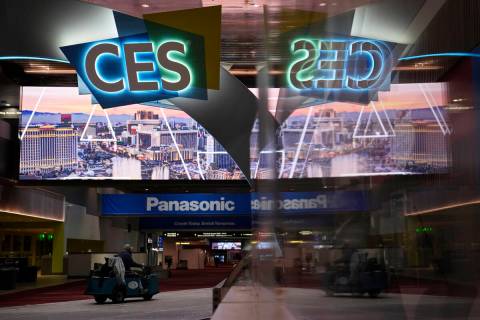