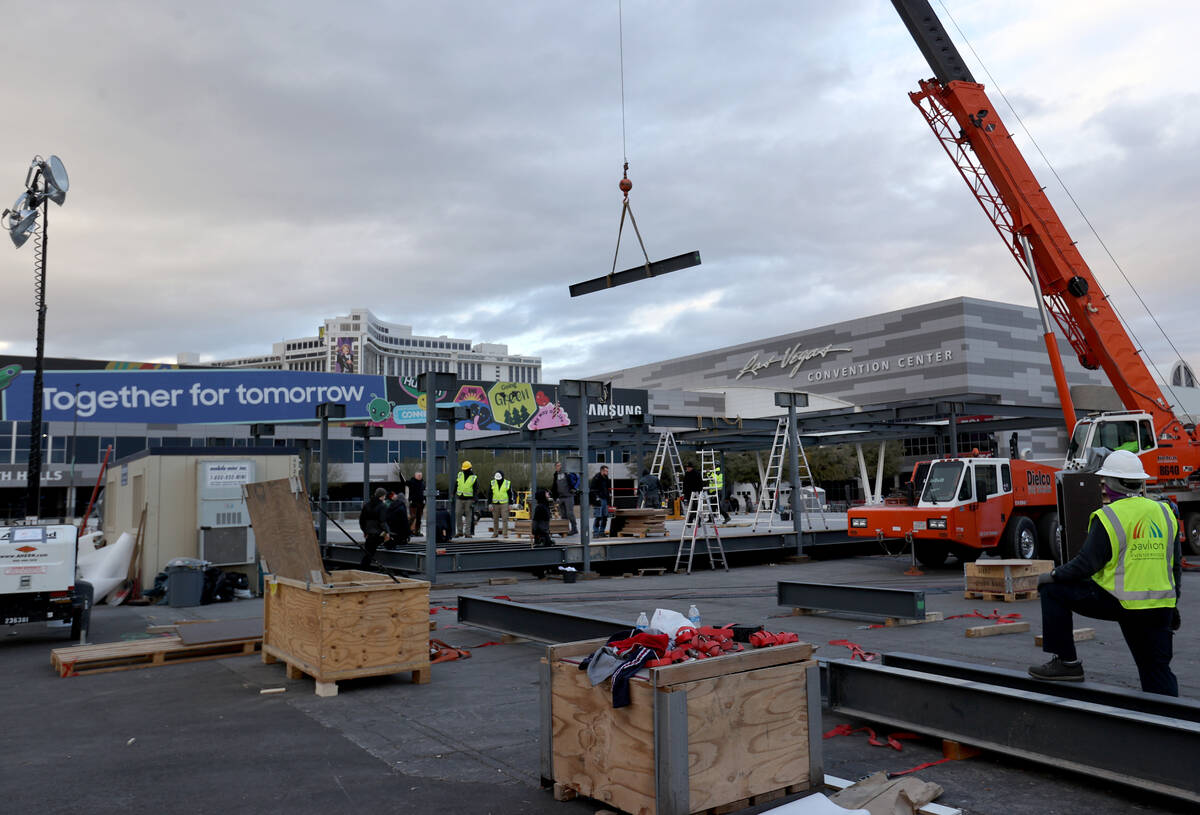 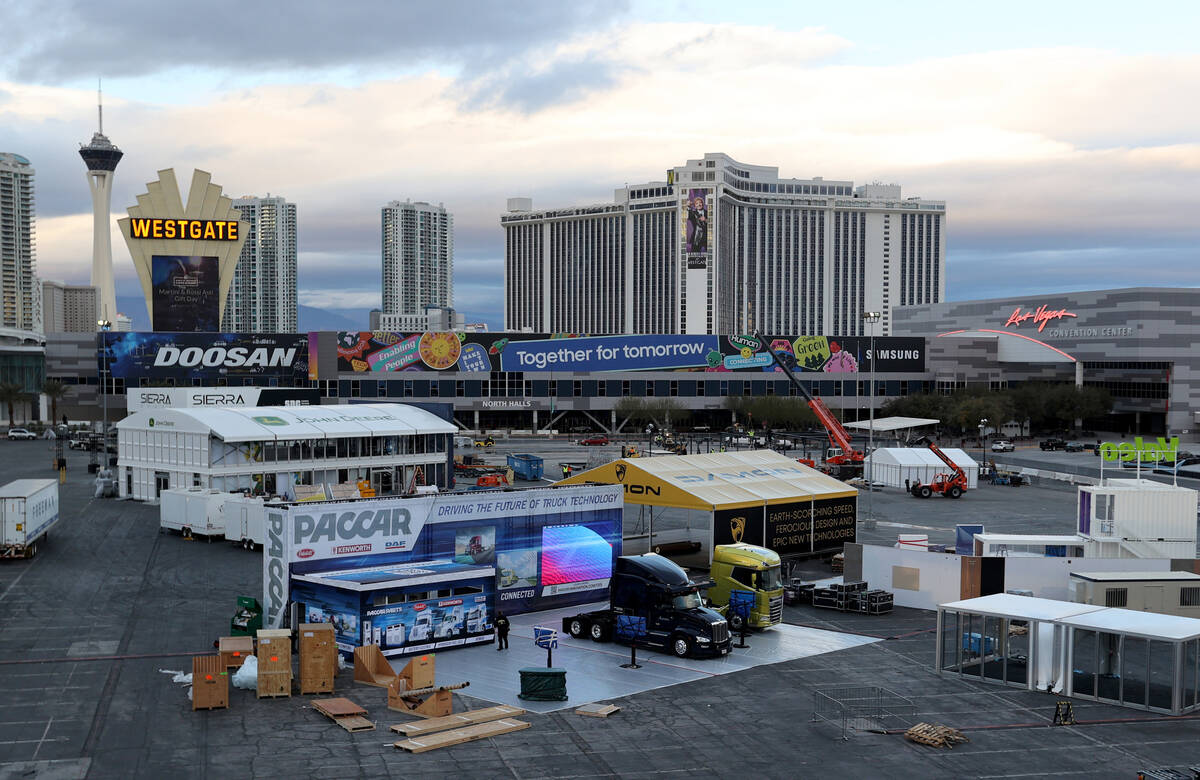 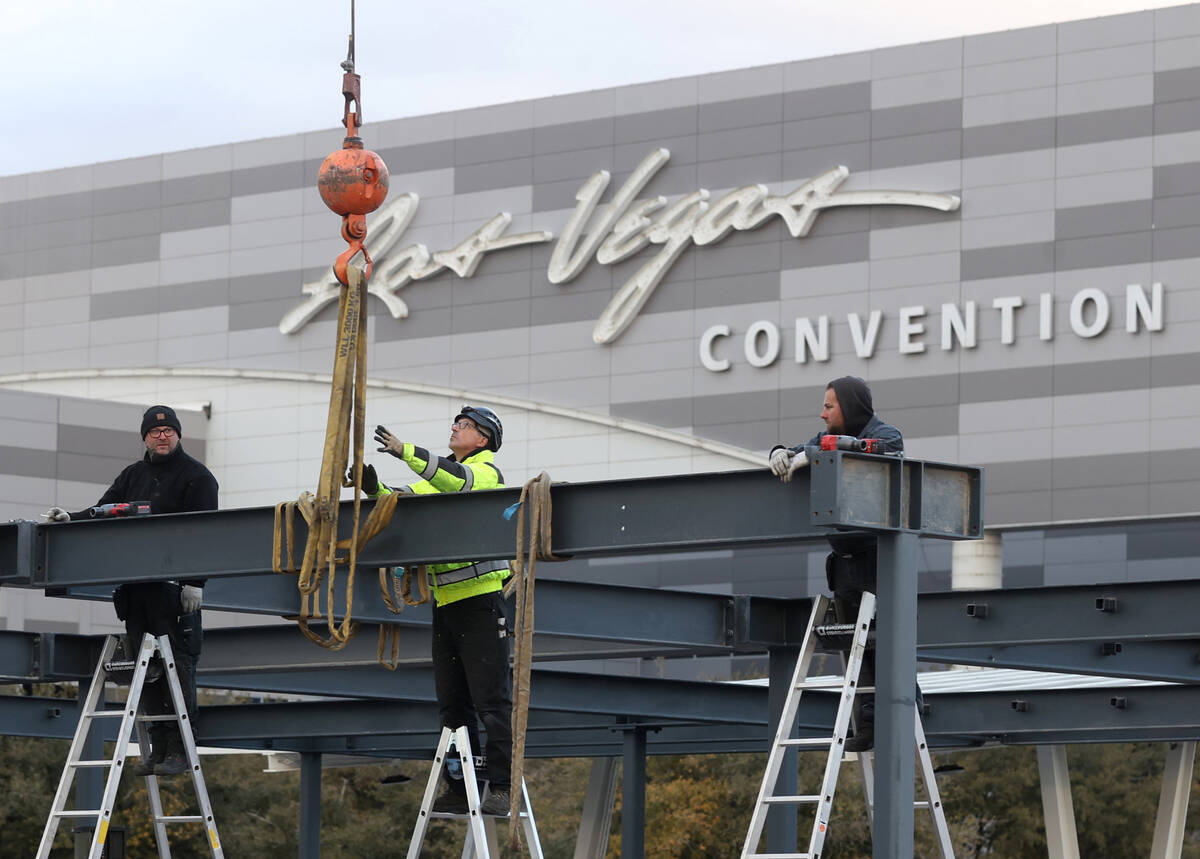 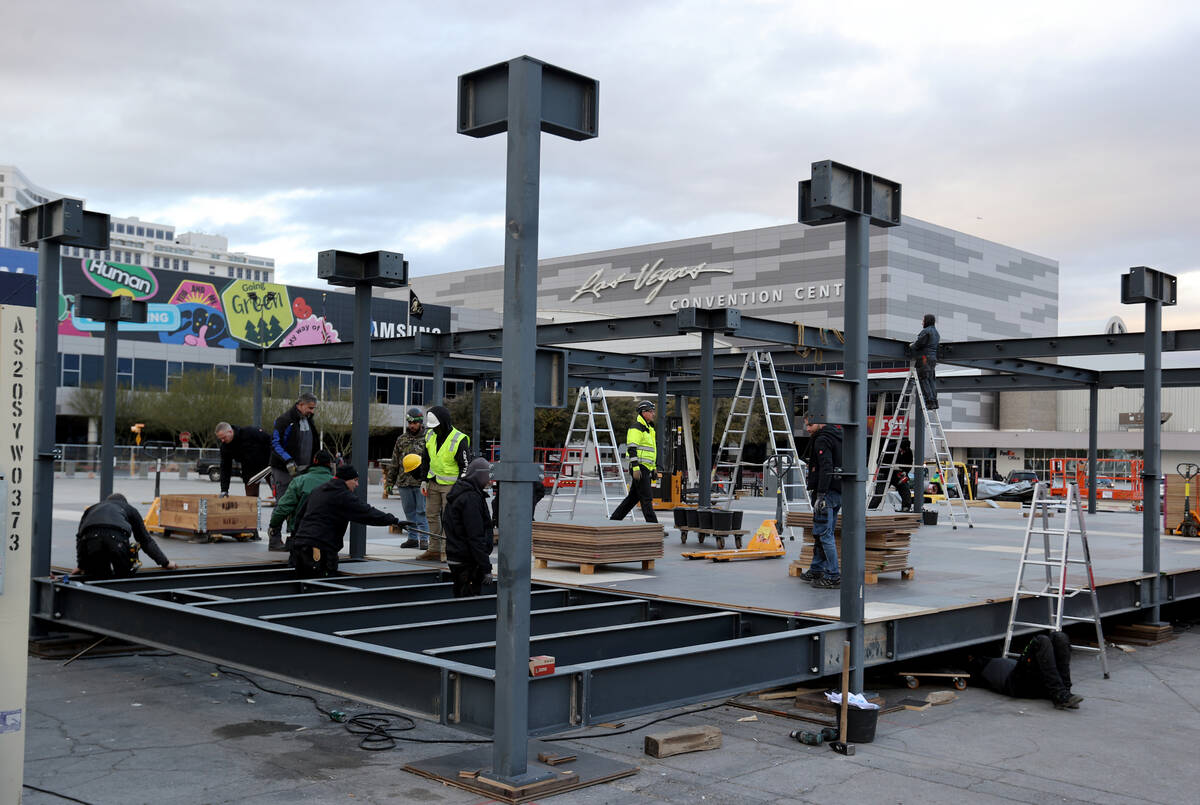 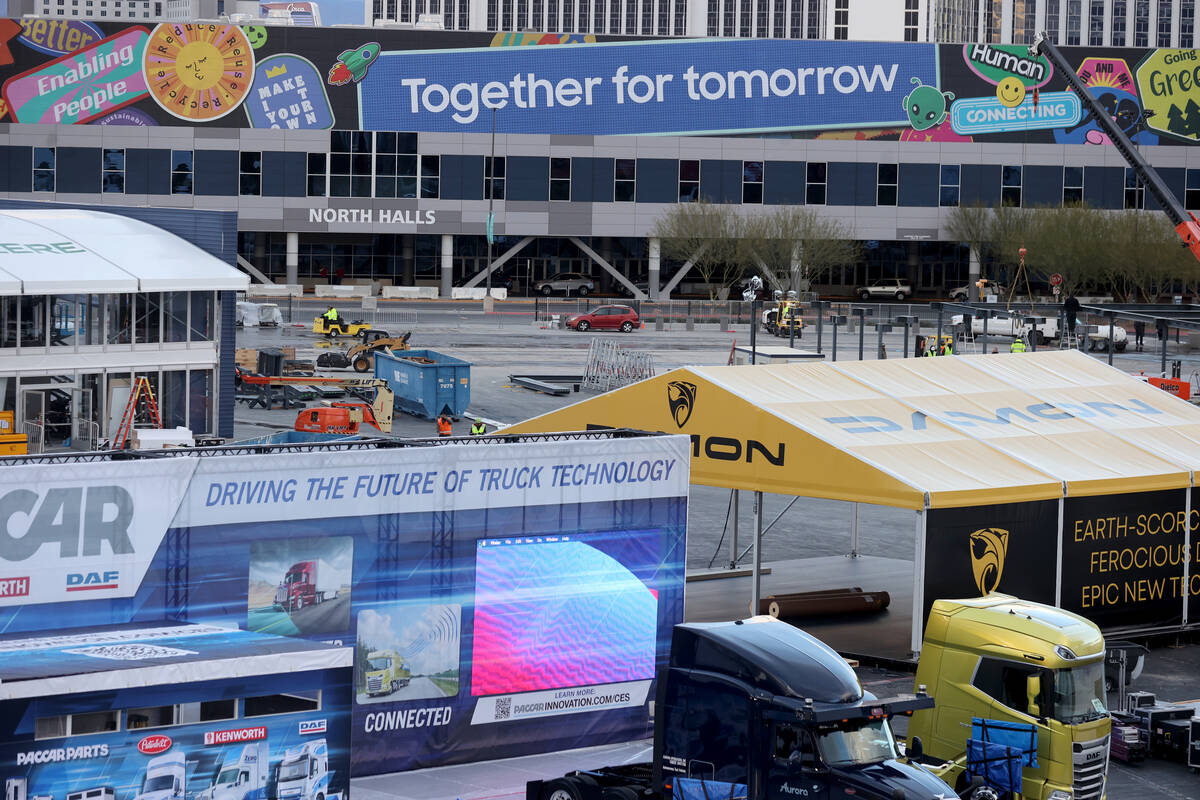 CES has always been the city’s largest annual trade show, but with the uncertainties surrounding COVID-19, it’s possible it could be dethroned this year.

No one really knows just how many people will arrive this week for CES, which is facing challenges because of the rapid spread of the omicron variant of COVID-19.

Organizers of the show announced Friday that they are cutting the show by a day, closing Jan. 7 at 6 p.m., and eliminating Saturday activities. They said the step was taken as an additional safety measure to the current health protocols that have been put in place for CES.

CES usually draws more than 170,000 attendees and 2,200 exhibitors, with up to 30 percent of them coming from foreign countries.

The sponsoring Consumer Technology Association has instituted some of the strongest health and safety protocols ever developed for a large gathering in the city, and the Las Vegas Convention and Visitors Authority has acknowledged its efforts.

“We appreciate how proactive CTA has been to provide the safest and healthiest environment for its attendees and exhibitors,” said Lori Nelson-Kraft, the LVCVA’s senior vice president of communications.

“We respect it’s a personal decision to travel or attend events in person; however, CTA has done a terrific job of implementing additional layers of health and safety measures ensuring CES will be a fully vaccinated show and providing complimentary COVID testing kits for their exhibitors and attendees,” she said.

The association this year isn’t offering an attendance estimate but noted that many are likely waiting until the last minute to decide whether to be in Las Vegas or to participate in the virtual show online that was announced as a participation option last summer.

“We know several major companies have reduced their physical presence at CES 2022, and we understand their concerns,” Consumer Technology Association President and CEO Gary Shapiro said in an op-ed piece published last week by the Review-Journal. “They want to protect their employees from COVID-19 and the risk of having to quarantine in Las Vegas.”

At the same time, critics have lambasted the association in blog posts for not canceling what they fear will be a super-spreader event, and dozens of large tech companies have already withdrawn from in-person attendance at the show.

Gaming and tourism analyst Brendan Bussmann, director of government affairs for Las Vegas-based Global Market Advisors, said CES organizers have done just about everything they can to provide a safe environment.

“CES has done all the right things to try to have as safe an event as possible,” he said. “But the unknown is still the unknown and there’s a lot of unanswered questions that make it very challenging to have events like this. I’m not saying it shouldn’t go on, but it just shows how fragile it is and how things can change on a dime.”

The fallout has been palpable. Microsoft Corp., Google, General Motors Co., Waymo, Lenovo Group, AT&T Inc., T-Mobile, Amazon, Twitter Inc., BMW, Advanced Micro Devices, Micro-Star International Co., Procter &Gamble Co., and Meta Platforms Inc., formerly known as Facebook, are among the big companies that have backed out of the show in light of the rapid spread of the omicron variant.

Room rates at many hotels, usually $200 to $500 higher than normal during CES week, also have fallen — some to less than $100 a night, according to Hotels.com — reflecting a possible reduction in demand. Hundreds of flights nationwide have been canceled as airlines grapple with staffing shortages that have occurred because of the pandemic and bad weather.

Still, CTA officials point to the positives of attending the show in person. Shapiro and Karen Chupka, executive vice president of CES for the association, have stressed the great value in experiencing new technology and innovation in person, which is why the association is going ahead with the Las Vegas show.

And there will be plenty of new technology and innovation to see.

Chupka said automotive technology will be a show highlight this year, and CES will take advantage of its expansion into the Las Vegas Convention Center’s new West Hall to showcase autonomous vehicle technology and other gadgets for cars.

The parking lot west of West Hall will be used for driving demonstrations, and, for the first time, autonomous race cars will go head-to-head at Las Vegas Motor Speedway on Friday as part of the Indy Autonomous Challenge featuring several university racing teams.

Chupka expects the Boring Co. people-mover — the underground, mile-long, dual-tunnel transit system at the Convention Center that opened in June — will be a big hit with the tech crowd. Based on pre-show buzz, Chupka is convinced most attendees aren’t sure what to expect when they see it for the first time.

While automotive products will be in the spotlight, one of the joys of CES is the wide variety of products on display.

Robot technology will be shown, including at Pudu Robotics’ booth, where seven service robots will be exhibited.

Chinese company Okai plans to exhibit its line of e-scooters, e-bikes and accessories.

Partnering with Verizon and its 5G technology, Vuzix Corp. will show its smart glasses and augmented-reality products for sports and video gaming.

Internet of Everything Corp. is showing products to protect companies from cybercriminals and cyberterrorists that use ransomware, malware and Domain Name System hijacking to extort money.

Medical technology also will be featured at CES — and the organizers of the show have already applied some of that knowledge toward keeping all who attend safe.

The association has told attendees they must be fully vaccinated against COVID-19 to be able to pick up a badge for admission to the show. The CTA also is recommending taking a COVID-19 test before departing for Las Vegas.

International travelers must show a negative COVID-19 test taken no more than a day before travel to the U.S. The association also recommends attendees get a COVID booster vaccine and the flu vaccine before leaving.

Attendees arriving at Harry Reid International Airport in Las Vegas will be able to pick up admission badges in the terminal.

When attendees receive their badges, they will get a free Abbott BinaxNOW COVID-19 antigen self-test kit. Organizers are recommending that attendees take the 15-minute test, which requires a shallow nasal swab, in their hotel rooms before entering any convention venue.

Show organizers say they will enforce the state of Nevada’s mask mandate, requiring attendees to wear facial coverings in exhibit booths and indoor exhibit facilities, in conference and keynote rooms and on CES shuttle buses that ferry attendees between venues. CES safety ambassadors will monitor trade show floors and provide masks for those who don’t have them.

For international attendees, the association is offering free diagnostic tests for those needing them for travel back to their home countries.