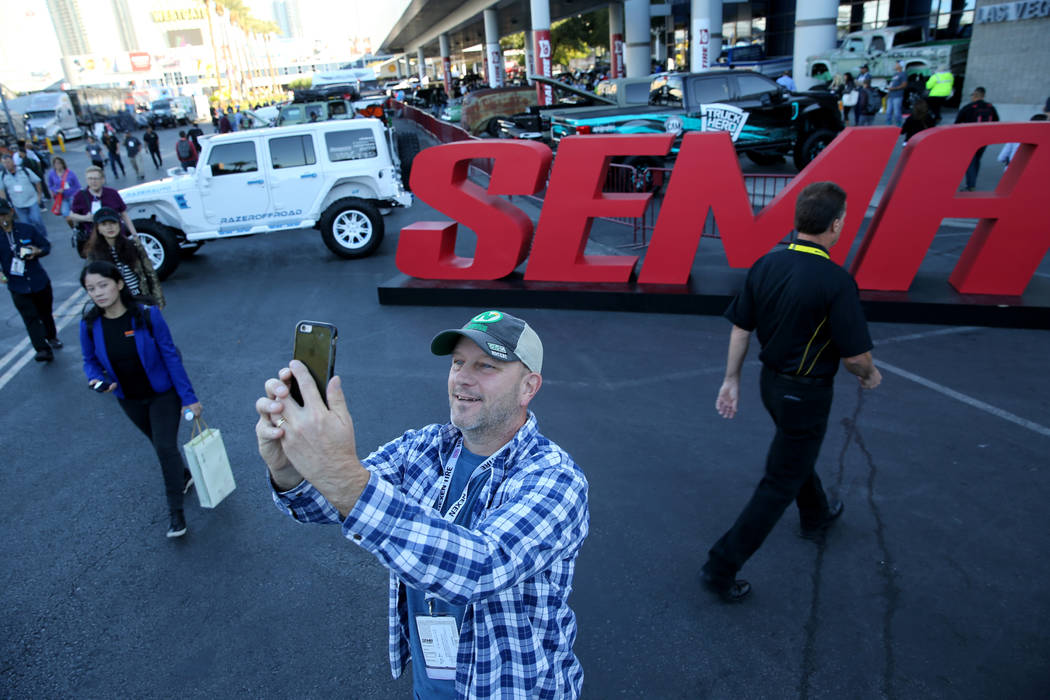 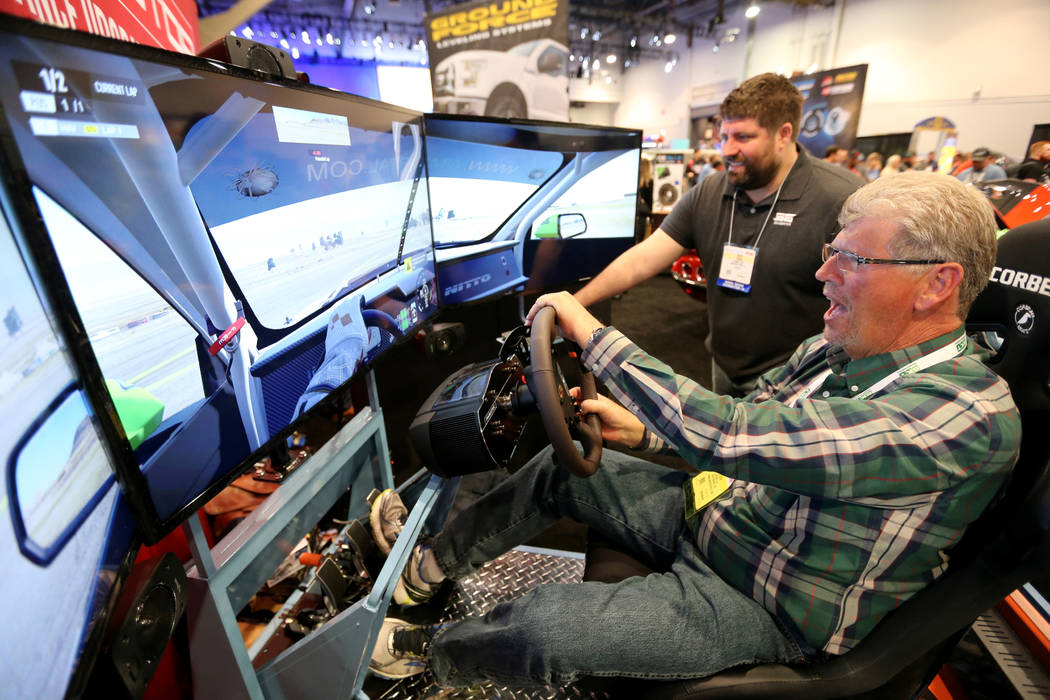 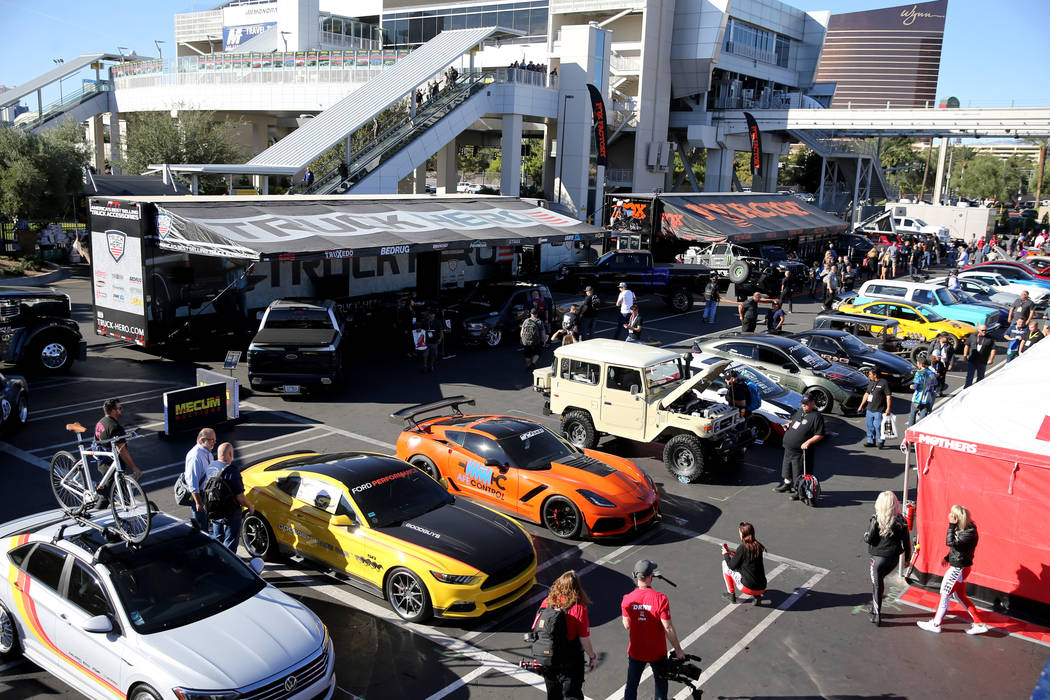 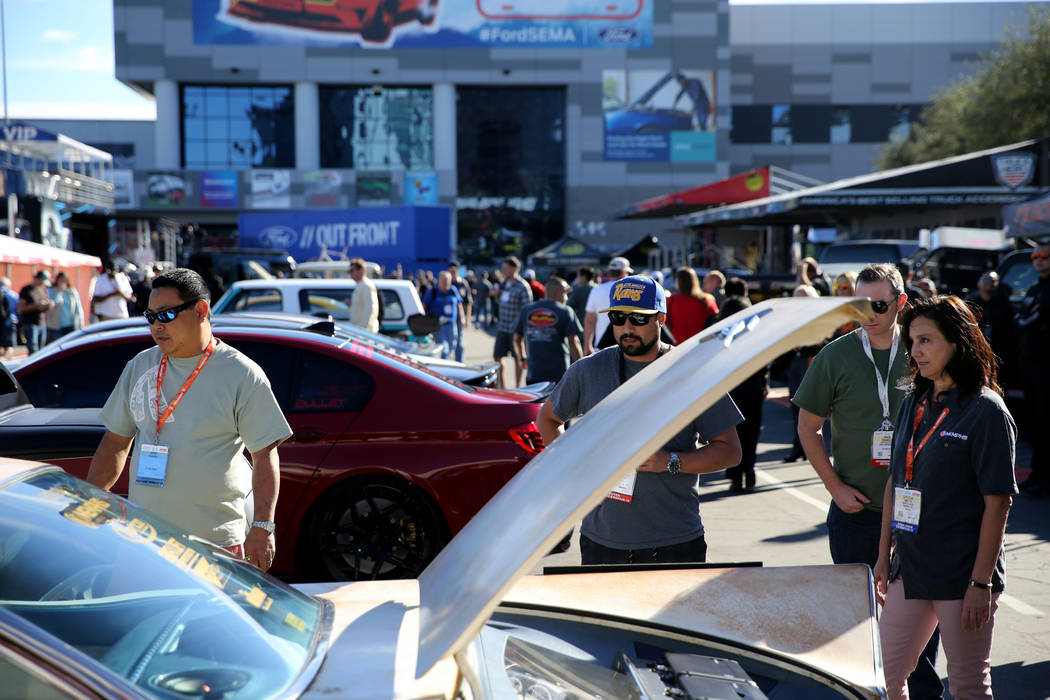 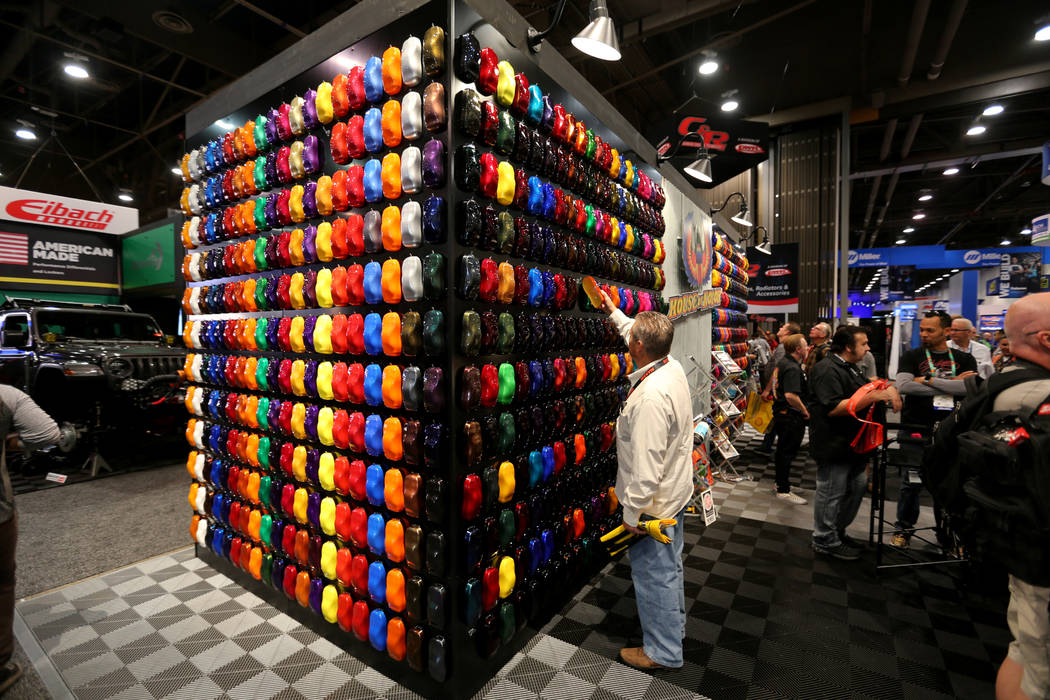 Gary Grubb of Fairfield, Ohio, looks for a color for his car at the House of Kolor booth at the Specialty Equipment Market Show at the Las Vegas Convention Center Wednesday, Oct. 31, 2018. The SEMA Show 2018 runs through Nov. 2. (K.M. Cannon/Las Vegas Review-Journal) @KMCannonPhoto 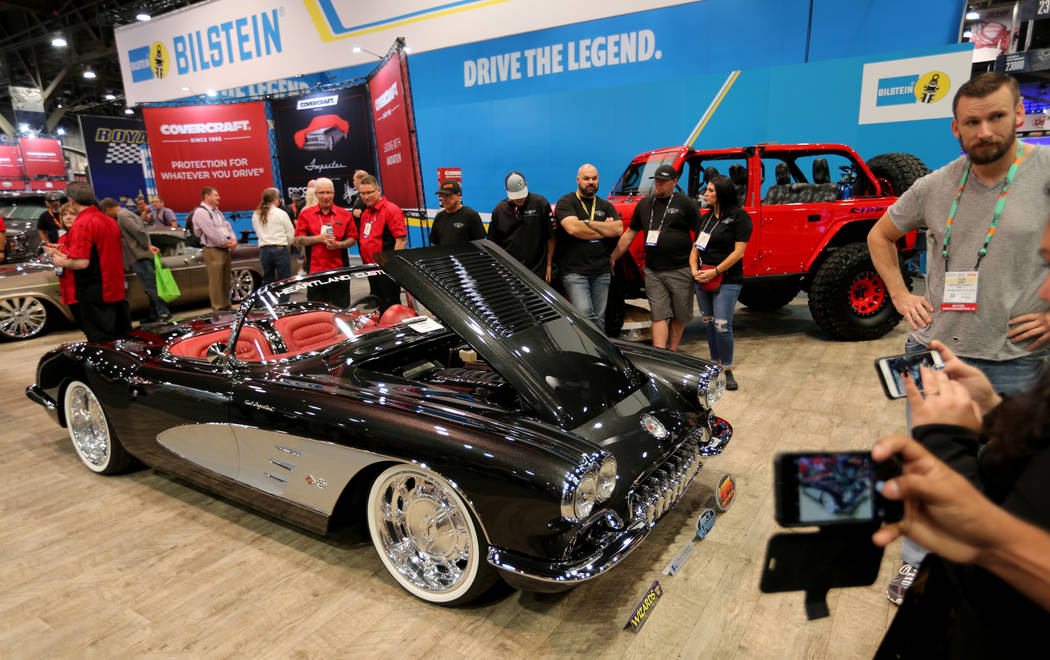 When Las Vegas takes on a Detroit vibe next week, one of the organizations sponsoring a massive trade show has an important question for consumers: Do you know what happens to the data your car produces?

The sensitive privacy issue of telematics will be among the top educational and advocacy programs offered at the Automotive Aftermarket Products Expo at the Sands Expo and Convention Center from Tuesday through Thursday. It’s part of Automotive Aftermarket Industry Week that is expected to draw upward of 160,000 people.

AAPEX, operated by the Auto Care Association and the Automotive Aftermarket Suppliers Association, has virtually the same audience as the larger SEMA show — the Specialty Equipment Market Association — that will take over the Las Vegas Convention Center Tuesday through Friday.

The co-located shows enable registrants of either event to attend the other.

Della Domingo, a spokeswoman for SEMA, said one of the new features at this year’s show will be displays dedicated to overlanding, vehicles and services specifically designed for camping, a theme that matches up with the Nevada Commission on Tourism’s outdoor adventure marketing campaign.

The “Overland Experience” area will feature dozens of customized vehicles with popped out tents, sunshades outfitted for survival and portable kitchen systems displayed alongside exhibitors supporting the growing overlanding market.

The Las Vegas Convention and Visitors Authority estimates the dual shows will result in an economic impact of $259 million, about 10.3 percent more than last year’s show. By visitation, it’s Southern Nevada’s second-largest trade show behind CES and by exhibit space, SEMA is annually one of the largest shows at the Las Vegas Convention Center.

SEMA, which represents the $44.6 billion automotive aftermarket industry, has been a fall staple in Las Vegas since 1977 when it moved from the Anaheim Convention Center.

“I took my shop foreman with the goal of gaining education, contacts, products and processes that will benefit our nine-bay repair shop,” he said. “The education classes were exceptional and the different opportunities to visit with different vendors and exhibitions was very valuable.”

But Burdick did have one suggestion. “The only critique that comes to mind is that it needs to be longer than three days,” he said. “There’s just not enough time to do and see as much as we wanted, but even one extra day would be helpful.”

Manufacturers come to the SEMA Show to showcase their new products while buyers come to discover products and trends. Because SEMA is a business-to-business event, it’s not open to the public.

SEMA, however, is one of the rare Las Vegas trade shows that offers one event for the public — Friday’s SEMA Ignited, a post-trade show afterparty to be staged at the Las Vegas Convention Center’s Platinum Parking Lot at the southeast corner of Swenson Street and Desert Inn Road, east of the center’s South Hall.

The Friday night festival takes place immediately after SEMA closes as hundreds of cars and trucks will parade out of the Las Vegas Convention Center and assemble at SEMA Ignited.

Attendees will have the opportunity to view hundreds of customized rides featuring the newest and most innovative products from the show. The event also includes food, music, drift demonstrations, celebrities and the culmination of the SEMA Battle of the Builders competition which includes more than 250 competitors vying for the title of the “Ultimate Vehicle Builder.”

General admission tickets are $20 and children under 12 are free with a paying adult.

But before the partying begins, there is work to be done and issues to debate.

AAPEX is putting a big push on gaining control of car data. It has established a YourCarYourData.org website for consumers to sign a petition to demand Congress give vehicle owners access to and control of the data generated from their own vehicles.

According to AAPEX officials, today’s modern vehicles collect 25 gigabytes of data per hour that can be transmitted to car manufacturers from vehicles equipped with wireless communication. Manufacturers, they say, can prevent an individual’s personal mechanic from accessing the information and can sell it to third parties.

AAPEX estimates that by 2022, 87 percent of new vehicles in the United States will be equipped with telematics, but today, three out of four consumers are unaware of data transmissions.

“Drivers are unwittingly generating new revenue streams for car manufacturers every time they get behind the wheel,” the AAPEX website says. “The vast amounts of data from driver behavior to GPS location could be sold to third parties, including advertisers.

AAPEX has a “Driver Bill of Rights” on the YourCarYourData website.

SEMA also will have educational seminars and panels on topics like autonomous vehicles, driver-assist products and lane-departure technology — but won’t have the same push on telematics.

The Review-Journal is owned by the family of Las Vegas Sands Corp. Chairman and CEO Sheldon Adelson. Las Vegas Sands owns and operates the Sands Expo and Convention Center.