If you are having problems accessing today’s e-Edition, please click on this link VIEW E-EDITION
February 22, 2009 - 10:00 pm 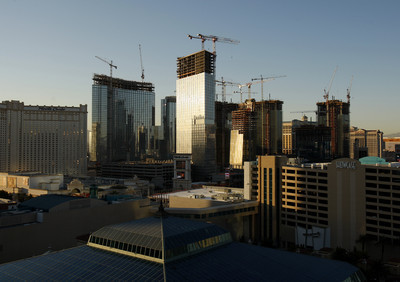 Gaming companies love green. Today, it’s not so much about the color of money as green building practices. Several of the industry’s biggest operators have become unlikely green advocates in recent years. MGM Mirage, Las Vegas Sands Corp. and Harrah’s Entertainment all pursue green building initiatives at their hotel-casinos. Going green makes a lot of sense; it can help save greenbacks with reduced energy costs and it’s good for the environment.

Yet gaming’s love affair with green construction didn’t blossom until the 2005 passage of Assembly Bill 3. The legislation gives projects that achieve a Leadership in Energy and Environmental Design certification up to a decade-long, 50 percent property tax break. The savings amount depends on the LEED rating, which goes from basic up to platinum.

LEED, for those unaware, is today’s hippest and most talked about building trend. The 9-year-old rating system, developed by the U.S. Green Building Council, grades project sustainability based on points awarded for energy and atmosphere, water efficiency and indoor air quality, among other things. The more points, the higher the rating. LEED has quickly become a highly coveted status symbol, a public label of environmental consciousness and corporate responsibility.

But it was the cost savings that first grabbed gaming’s attention. LEED developments are often designed and built better than standard projects. They focus on maximum operational efficiency. LEED buildings, on average, use 40 percent less water and 30 percent less energy. They cut carbon emissions by 35 percent and reduce solid waste by 70 percent, the council claims.

“AB3 was very cutting-edge at the time. Nevada, as a state, was the nation’s leader in green building incentives,” said Pam Vilkin, president of Greenview LLC, a Las Vegas-based sustainability consultancy. “I think it helped jump-start the industry.”

Legislators, however, were caught off guard by the deluge of requests. MGM Mirage, for instance, is pursuing LEED certification tax breaks for its $9.1 billion CityCenter development. AB3 could mean millions in lost state revenues. In 2007, lawmakers responded by amending and scaling back the LEED incentive program. AB 621 streamlined and clarified previous language, while implementing a sliding percentage scale. Exceptions were made for a handful of early projects, including Fontainebleau, Palazzo, CityCenter, Echelon and Caesars Palace.

MGM Mirage’s CityCenter is the largest project to ever pursue a LEED certification. The 76-acre development calls for seven buildings totaling more than 18 million square feet of hotel rooms, residences, shops and entertainment space. The complex is wedged between the Monte Carlo and Bellagio along Las Vegas Boulevard South. CityCenter will employ more than 12,000 people upon completion later this year.

“I think CityCenter opened everybody’s eyes on why sustainability is important,” said J.F. Finn, a principal with Gensler, the project’s executive architect. “People began to think that if MGM Mirage is doing it, maybe we should take a second look at LEED and sustainability.”

CityCenter is pursuing a Silver LEED rating as a campus. The project’s biggest drawback is smoking inside the casino, which costs the development LEED points for air quality. CityCenter, however, is also pursuing LEED certification for its individual buildings. The project hopes to tally enough points to offset the difference. Sustainable highlights include using a cogeneration plant that provides 10 percent of the project’s power on site; ultraviolet-reflective windows; recycled building materials; and low volatile organic compound paints, sealants and adhesives. CityCenter’s Aria hotel tower will save 31 million gallons of water annually, using low-flow faucets, showers and toilets. Hotel rooms automatically adjust room temperatures and lighting when unoccupied. About 80 percent of materials from demolition of the Boardwalk hotel-casino, which once occupied the project site, were saved and reused. The added cost for pursuing LEED is only 1 percent, say project officials, who note that energy savings make up for the expense.

“We made the decision to build CityCenter to LEED standards and after significant analysis,” said Gordon Absher, vice president of public affairs for MGM Mirage. “This was, by no means, a safe decision. It had never been done before. Not just in Las Vegas, but on this scale. It had never been before — period.

“We looked at the business case of going green. And we looked at it as the right thing to do. The legacy of CityCenter is going to survive in many ways.”

Harrah’s Entertainment similarly sees building green as business-savvy. The company has spent $74 million during the past six years on sustainable upgrades to its properties. Although the improvements aren’t flashy, they can dramatically reduce operating costs.

“We’re not new to green. We’re not jumping to the green bandwagon,” said Jacqueline Peterson, a Harrah’s spokeswoman. “There is definitely a cost savings component, but there is also a social responsibility as well.”

Harrah’s replaced much of its landscaping with low-water, desert-friendly plants, trees and shrubs. Its Bally’s hotel-casino uses a water filtration system at one of its restaurants that eliminates plastic bottles. Mandalay Bay uses leftover food as plant fertilizer and farm animal feed. Harrah’s replaced millions of bulbs at its properties with light-emitting diodes that consume one-tenth the energy of regular incandescent bulbs. And it installed digital thermostats in all its hotel rooms. Harrah’s has done more than 30 major projects in Las Vegas since 2004. Sometimes little things make a big difference.

“The projects have reduced energy use by 40 million kilowatt hours a year,” said Eric Dominguez, Harrah’s director of energy and environmental services. “From a carbon perspective, we have avoided almost 60 million pounds of carbon dioxide from being emitted. That equals over 30 million round-trip flights from Las Vegas to Atlantic City.”

In 2004, Harrah’s installed a 5-megawatt cogeneration plant at the Rio. The gas-fired plant generates electricity for the property and recycles exhaust heat for preheating water.

Harrah’s won’t receive any tax abatements for its green initiatives. But pursuing LEED isn’t necessary to realize the benefits of sustainability. A project can still be green, efficient and cost-effective without becoming LEED certified.

“What we are finding is a lot of clients are requesting projects that are LEED compatible, but they don’t want to go through the LEED process … (which) is a little more expense and they don’t necessarily want that recognition,” said Sean Coulter, 2009 president of the Las Vegas chapter of the American Institute of Architects. “It’s starting to become much more prevalent now than it has been in the past, especially with the current economy.”