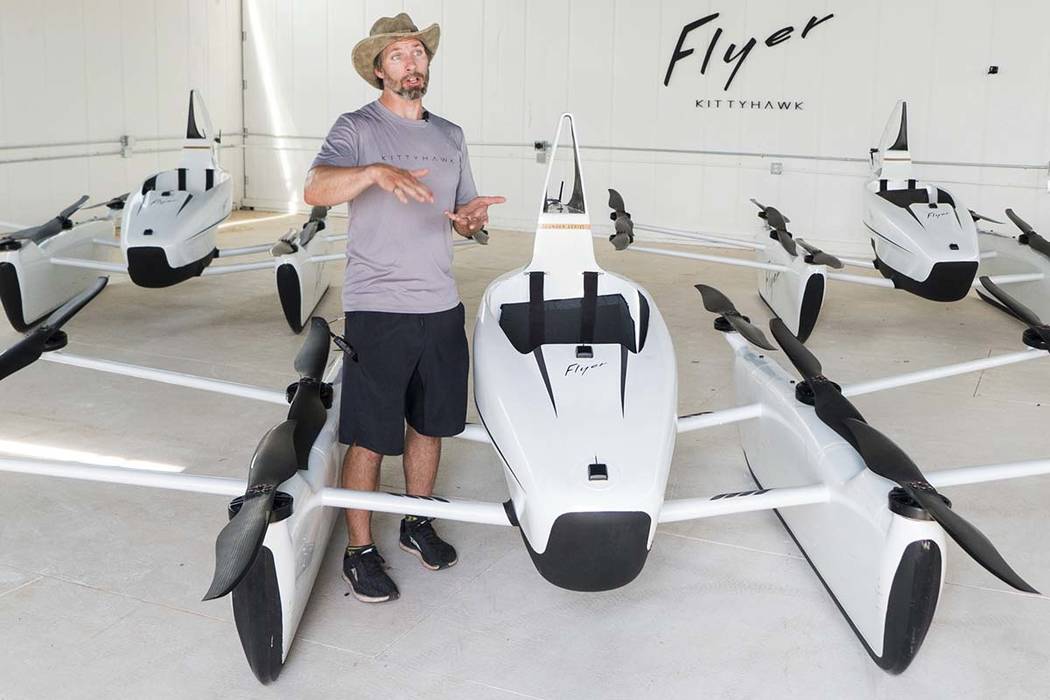 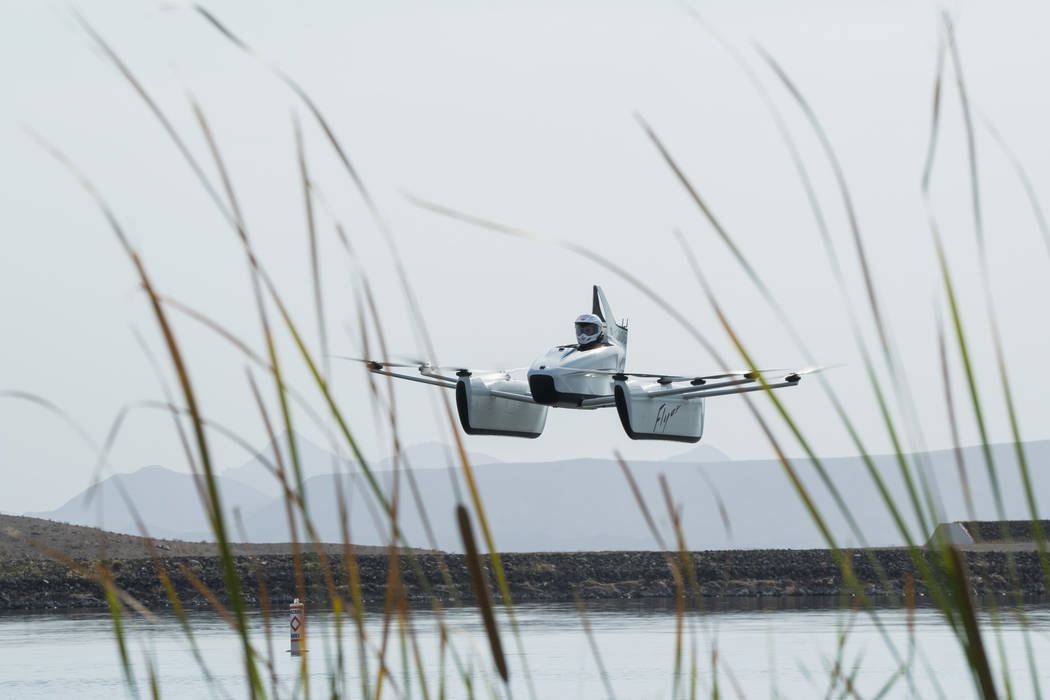 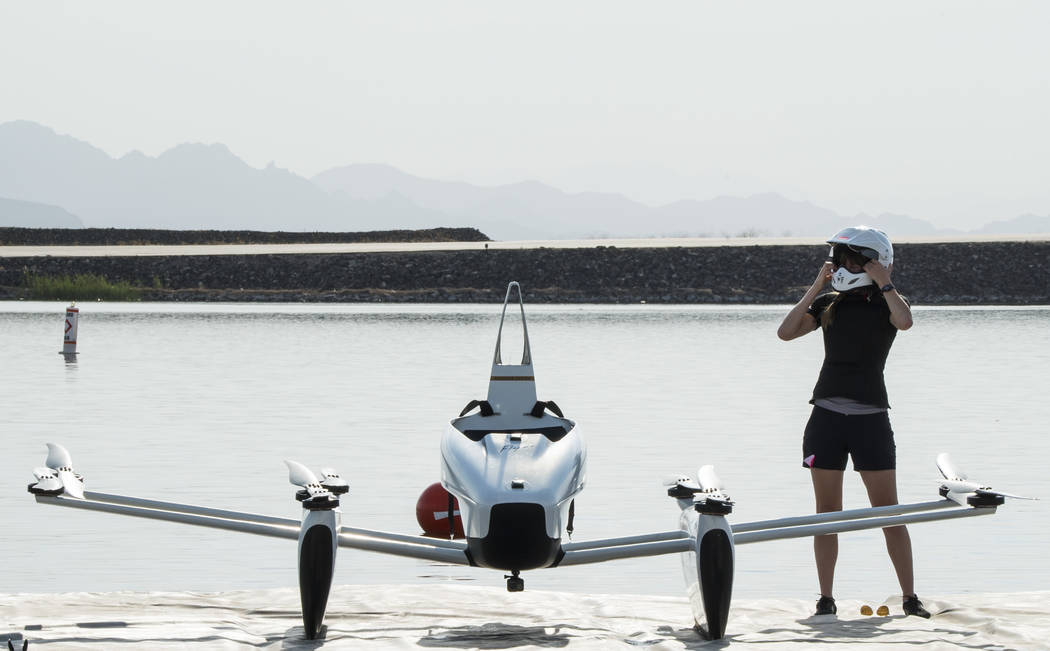 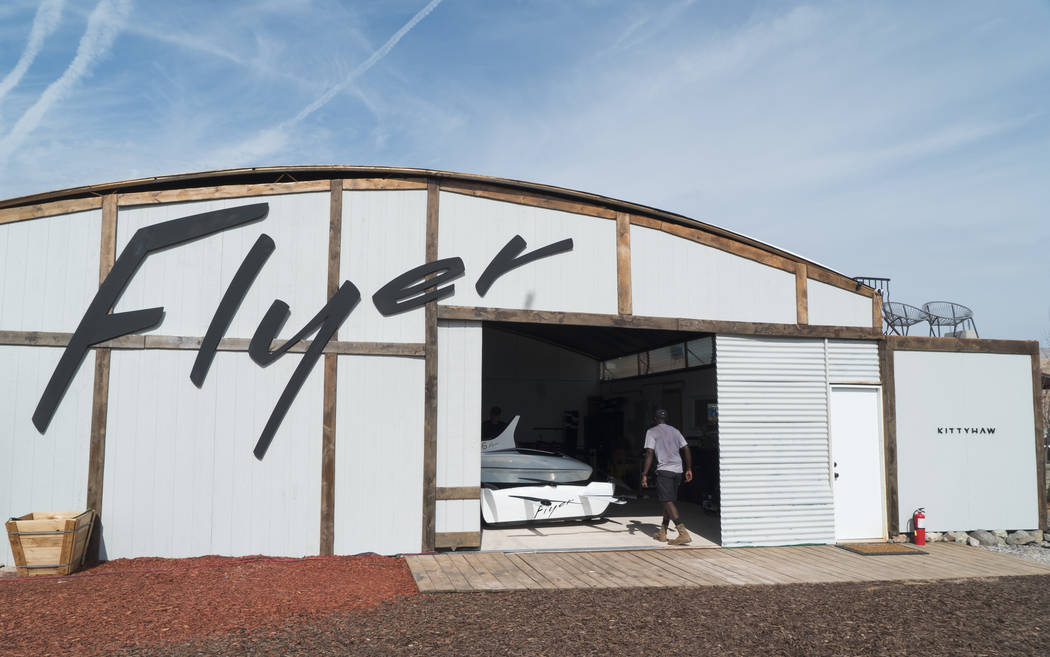 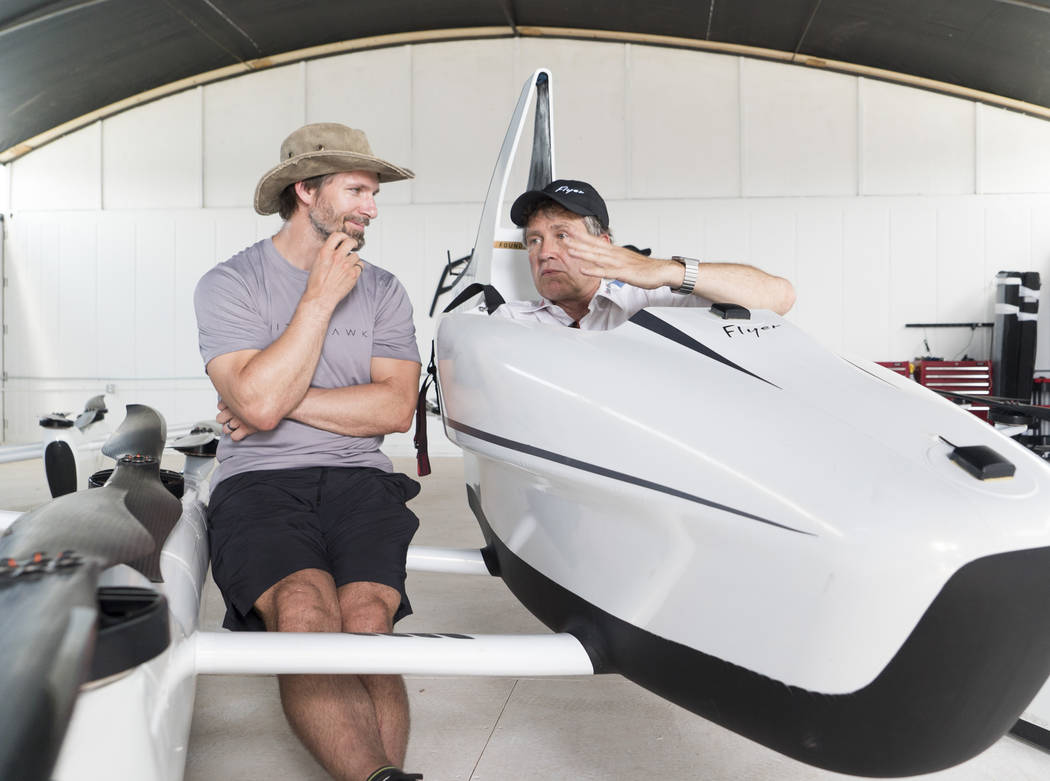 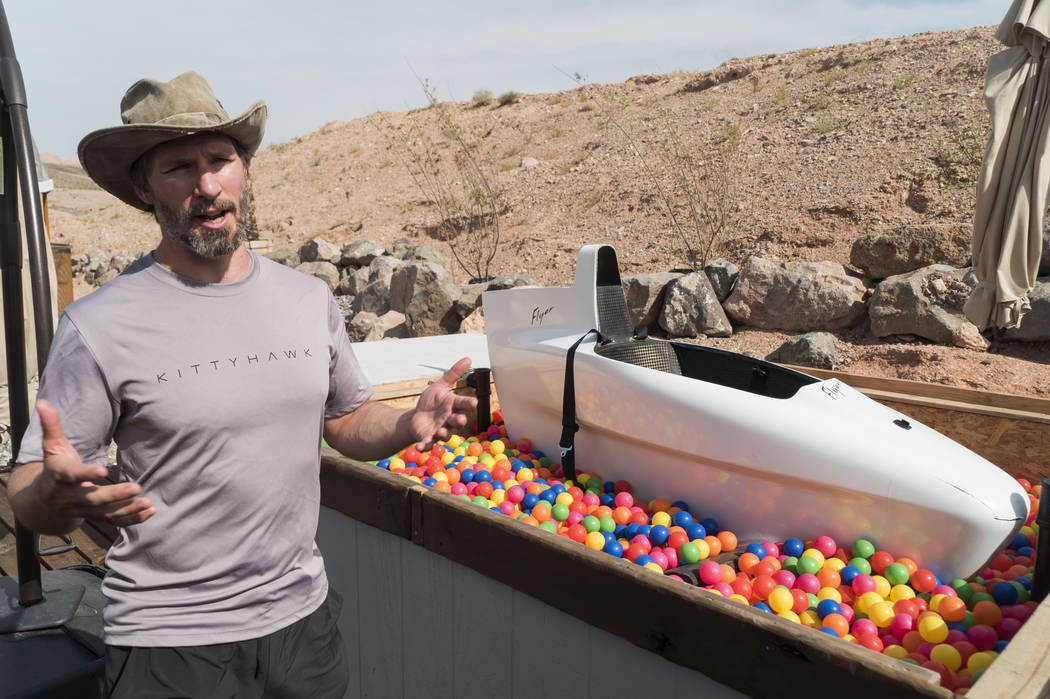 Technology entrepreneur and best-selling author Carter Reum was suited up and ready to go on his first flight in a Kitty Hawk Flyer at Lake Las Vegas.

But then the wind kicked up.

Out of an abundance of caution, flight operations personnel scrubbed his planned flight.

Reum, who had flown into Las Vegas from Los Angeles, would have to wait another day.

Earlier Wednesday, Brittney Miculka, the flight training manager for Mountain View, California-based Kitty Hawk, piloted a Flyer to demonstrate maneuvers for journalists who came from as far away as Japan, Germany and Great Britain.

Kitty Hawk has developed an ultralight recreational aircraft that could someday be used as a flying car for urban commutes. Five Flyers are located at the Lake Las Vegas training center where 15 Kitty Hawk employees have managed operations since the facility was built last spring.

“The amazing thing about the Flyer is that it is so easy to operate,” said Todd Reichert, director of engineering on the Flyer project. “There are just 12 moving parts, the 10 propellers and two controls in the cockpit.”

There are no gauges or computer read-outs, no altimeters or fuel indicators. Classified as a Federal Aviation Administration Part 103 ultralight aircraft, the Flyer requires no pilot’s license.

Miculka said she could teach someone the basics of flying it in about 20 minutes, but the flight team puts potential operators through a 90-minute session that includes time in a simulator, a session in a flight-rehearsal station and a training area that teaches operators how to escape in the unlikely event that the vehicle overturns in the water.

Reum, a founding purchaser of the recreational flying vehicle being tested at a flight operations center on the shore of a secluded cove, had gone through the training and was ready to fly.

The former Goldman Sachs investment banker, who also has invested in Lyft, SpaceX and Hyperloop, and who wrote “Shortcut Your Startup” with with his twin brother, Courtney, had already donned a crash helmet that provides direct communication with Miculka in a nearby elevated lakeside mission-control center and was about to start the motors when the wind came up.

In the early testing, Kitty Hawk — which derives its name from the North Carolina location where the Wright Brothers first flew their Wright Flyer aircraft in 1903 — has extensive flying restrictions, limiting the vehicle’s speed to 6 mph with a height restriction of 10 feet and low wind tolerance.

Lake Las Vegas developers Raintree Investment Corp. and John Paulson struck a deal on land that eventually will be used for new homes, but for now serves as the secluded flight center.

“We want them to have as much fun with the land as possible until it’s developed,” said Andy Gil Garcia of Lake Las Vegas.

Kitty Hawk officials aren’t saying how many Flyers have been built, how much they will cost or when they would be available for public use. While they’re designed for recreational use by hobbyists — they resemble oversize drones with pontoons — the end game is for use as essentially a flying car, elevating above traffic.

And that’s why Reum, who said he gave up driving two years ago, bought one, citing statistics that show residents of Los Angeles spend two weeks of their lives each year stuck in traffic on city streets and highways.

“None of us, no matter how wealthy or where we live or whatever our means are, none of us have more time in a day,” Reum said. “But with this, for the first time, you can get more time back.”