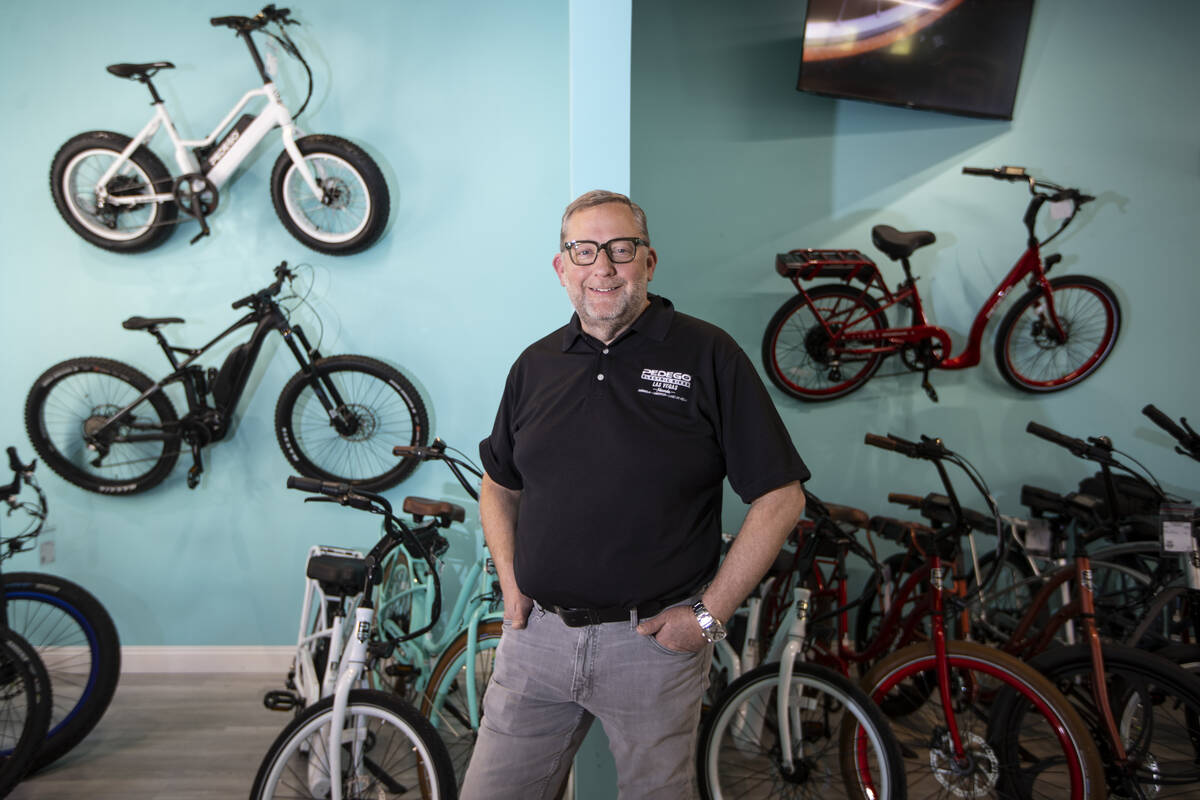 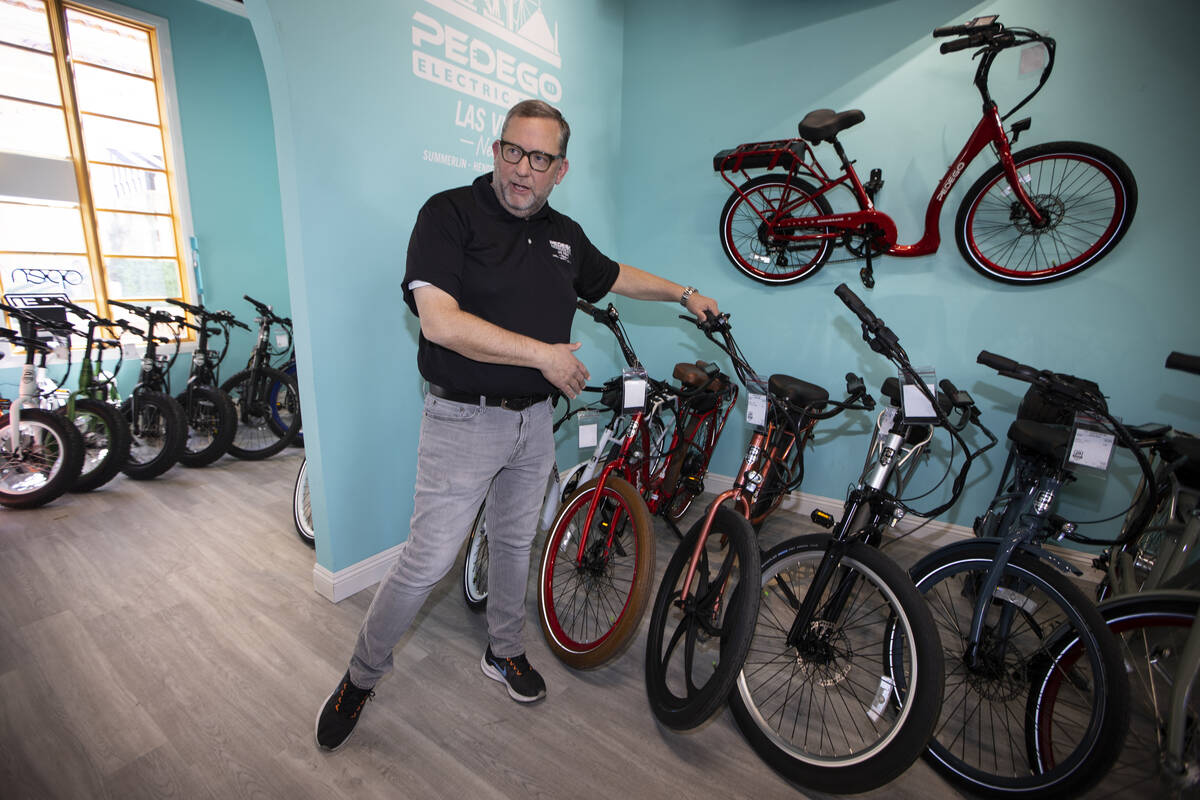 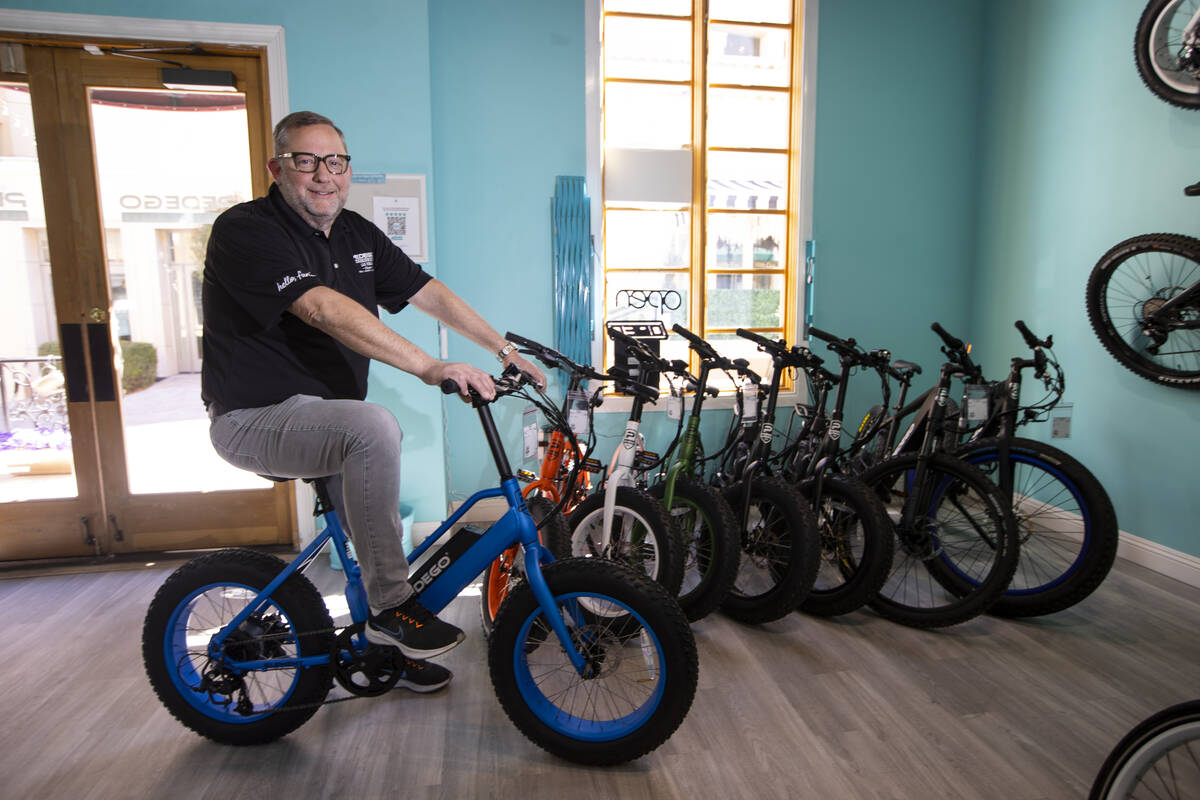 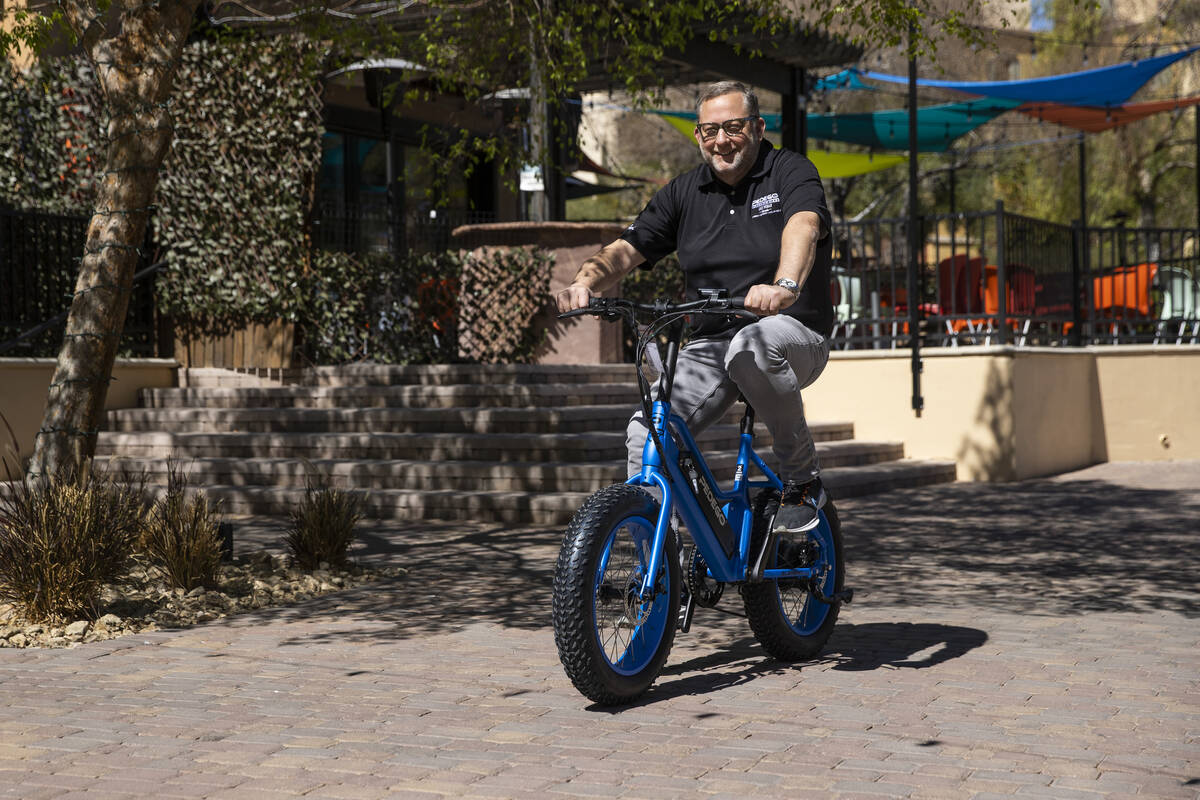 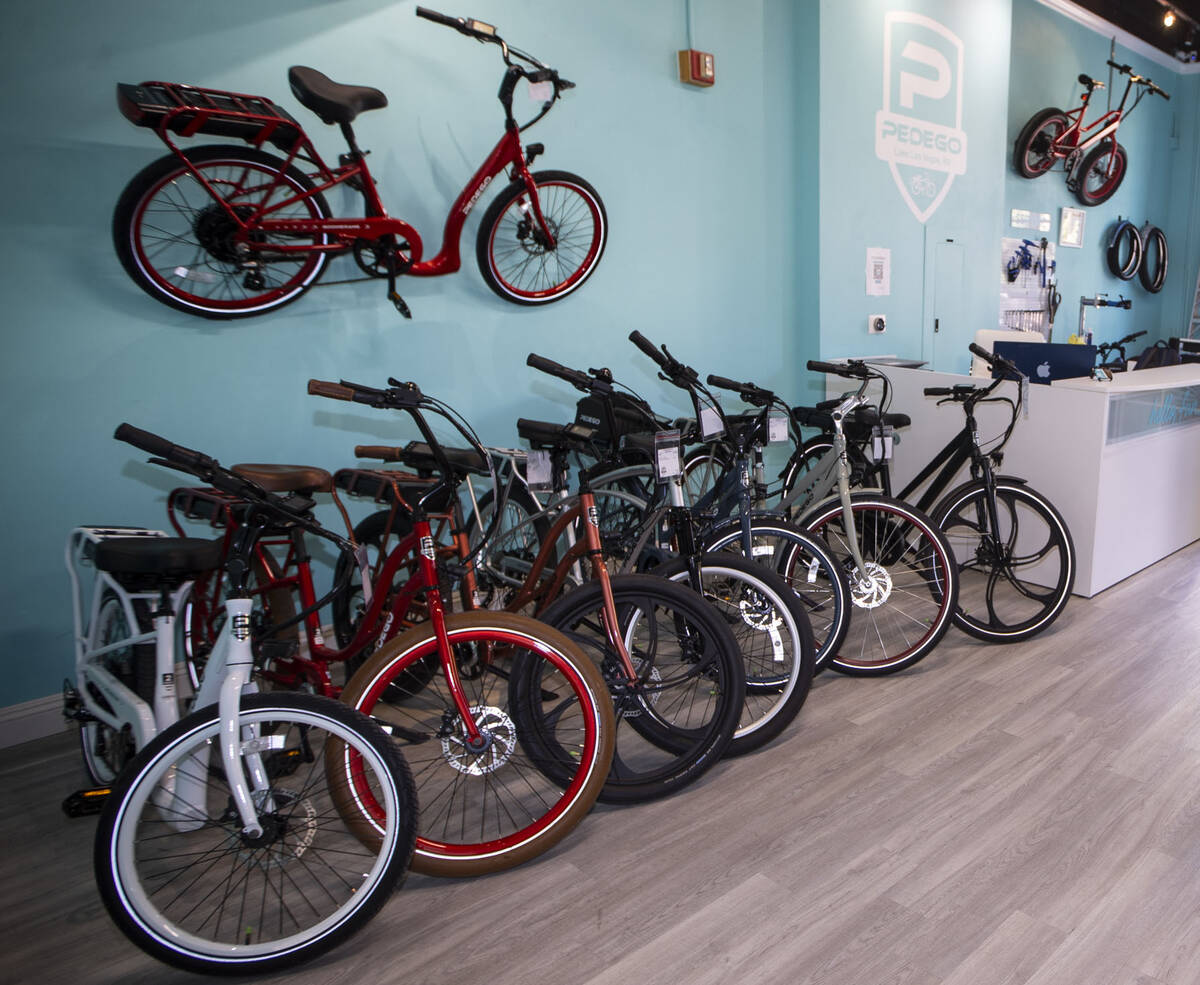 A Las Vegas man didn’t know his spur-of-the-moment decision to ride a bike eight years ago would change his life.

But Jordan Clark is sure glad he started pedaling.

A 30-mile electric bike ride in Huntington Beach, California, set him on a trail that would lead him to owning all three Pedego stores in the Las Vegas Valley. Now, Clark wants others to find joy atop a Pedego the way he did.

Clark was visiting the beach city on a business trip and found himself with a rare free afternoon. He stumbled upon a Pedego e-bike rental station in his hotel. It looked fun, but Clark told the shop manager he was concerned his weight of 330 pounds would be an obstacle. It turned out weight was no problem, Clark said, and the ensuing e-bike ride was exhilarating.

“I just could not stop thinking about this bike like nothing else in my life, and just every single day,” Clark, now 52 years old and 245 pounds, said at his Lake Las Vegas shop Wednesday.

Eight months after his fortuitous ride, he bought his own neon-green bike, which he still uses. Clark grinned as he talked about Pedego e-bikes, which he credits for his weight loss.

Pedego stores sell their own brand of e-bikes, or bikes fitted with battery-powered pedal assistance, and also offer rentals. Pedego has three locations in Southern Nevada — one in Summerlin, another in Henderson and a third that opened March 6 in Lake Las Vegas — and more than 200 locally owned stores across North America.

Clark, who also runs a meetings business, grew close with the former owner of the Summerlin and Henderson Pedego stores and received an invitation to take over the Summerlin shop at the start of the pandemic. Six months later, he also owned the Henderson store. Within nine months of Clark taking over the Summerlin store, it sold three times the number of bikes it would normally sell in a year.

Clark attributes the success to local events, carrying more inventory and being present in the store, as well as a general boost in e-bike popularity during the early months of the pandemic.

The brand is upscale in the e-bike trade, with prices ranging from $1,895 to $5,795 depending on the model. Clark said the product’s quality, five-year warranty and tailored customer service make Pedego worth the price.

Larry and Clare Laidlaw agree. The North Las Vegas couple bought a pair of Pedegos in early September 2020 and credit the bikes for helping them to stay active. Larry Laidlaw, 64, said he hadn’t been on a bike since college and his wife, 61, hadn’t hopped on one since she was a child.

He had knee surgery just before the pandemic, and the couple’s athletic club shut down once the pandemic arrived. They grew weary of sitting on the couch and watching TV all day. A friend of Clare Laidlaw’s talked up her own e-bike, prompting the Laidlaws to shop around for their own.

A Pedego e-bike “is not a small investment,” Larry Laidlaw said, but the couple decided that if they were going to spend the money, they might as well buy what they considered a better quality product.

The pedal assistance helps with steep hills and tough distances, he said. He credits riding Pedegos for a 20-pound weight loss and enhancing the couple’s relationship; it gives him and his wife something to experience together, Larry Laidlaw said.

“To get up on a summer morning and go pedaling up there at sunrise and you smell the freshly mowed grass and you see little bunny rabbits running around, it’s a lot of fun,” he said.

The Laidlaws now ride the trails across Southern Nevada, including those at Mount Charleston, Valley of Fire State Park, the 215 Beltway trail loop and the 34-mile trek near Lake Las Vegas and Boulder City known as the River Mountain Loop. They’ve also taken trips to Monterey, Pismo Beach and Newport Beach in California and Bryce Canyon and Zion national parks in Utah.

Larry Laidlaw’s bike died at Bryce Canyon, so he found a spot with cell service and called a Pedego store. Clark came on the line and walked him through a list of common problems. Sure enough, a wire had come loose. It was a quick fix and an example of Clark’s and Pedego’s customer service, Larry Laidlaw said.

Riding traditional bikes — Clark calls them “acoustic” bikes — requires planning and forethought. How much energy do I have? Which routes can I handle? Will there be hills?

E-bikes make it easier to just hop on and go for a ride, Clark said.

He tells a story about a spontaneous Pedego ride early in the pandemic when he rode from his home near Summerlin Hospital Medical Center to the empty Las Vegas Strip. He keeps a picture of himself posing with the neon-green bike in front of the Welcome to Las Vegas sign.

“I had no intention of doing that when I left the house,” Clark said. “It’s just so fun to ride.”

Clark still has his old acoustic bike but he doesn’t ride it. On Wednesday, he smiled while pedaling a Pedego in circles outside of his Lake Las Vegas shop.

The man who gives his cell phone number to every customer who buys a Pedego came to a stop and resumed an enthusiastic description of the store’s bikes.

An employee at a nearby store waved to Clark with a cheery, “How’s it going?”

A man in sunglasses, a dark baseball hat and cargo shorts walked his silver Pedego bike past the shop. Clark pointed to the small light affixed to the front of the bike, noting the shape meant the bike was an older model.

Older model or not, the man didn’t seem to mind. 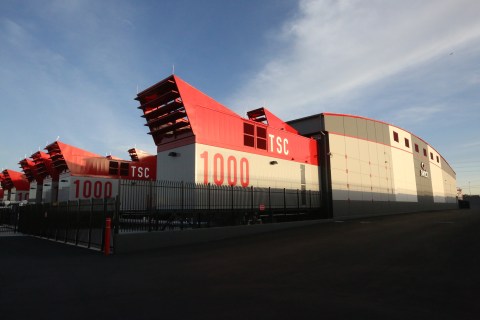 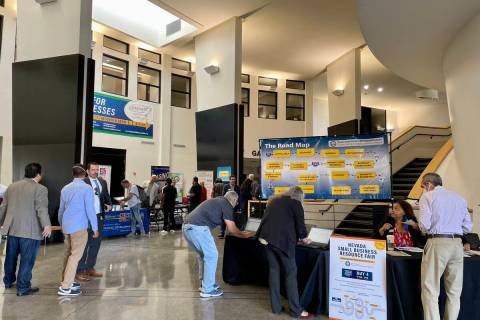 A resource fair for entrepreneurs and small business owners offered free access to advice, training and resources for running a business. 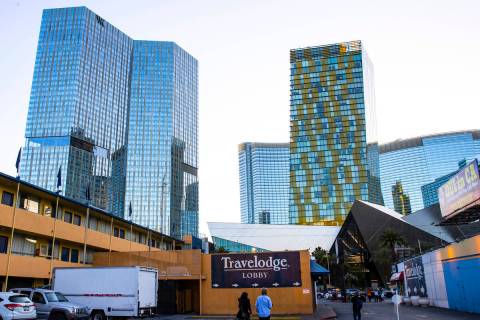 Billionaire Tilman Fertitta is in the process of buying 6 acres on Las Vegas Strip; he plans to build an upscale hotel project, sources say 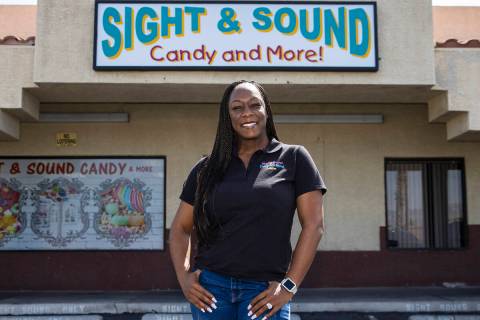 Sight and Sound Candy and More received a $10,000 grant to support her new business through a state government office that connects entrepreneurs to resources. 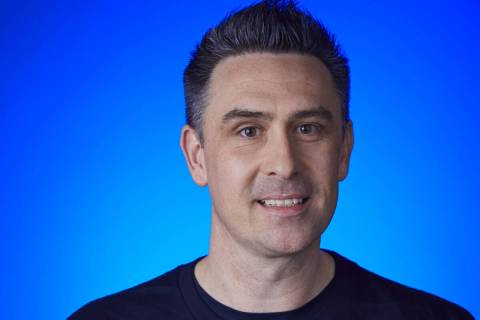 Zappos.com has officially named Scott Schaefer as CEO, a role he has held on an acting basis since December. 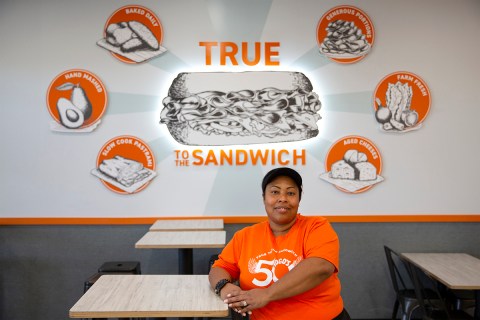 The California favorite has two shops in the Las Vegas Valley with plans to add several more. Two California transplants are helping Togo’s achieve its goals. 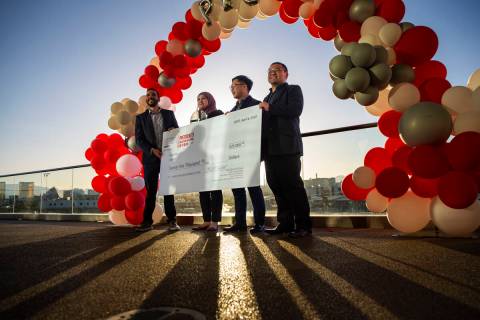 UNLV students were challenged to innovate a new way to diversify Nevada’s economy in the university’s first entreprenuerial pitch contest. 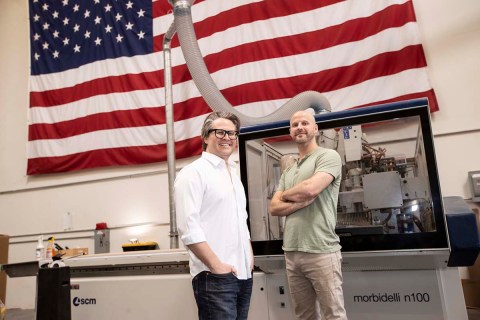 The Pucci brothers have a ‘Shark Tank’ appearance to their name and a North Las Vegas business that can adapt its modular privacy booths and other products to suit clients’ needs. 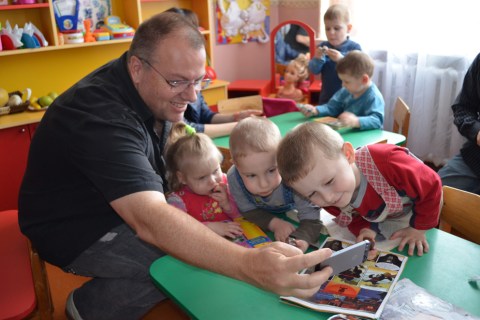 Las Vegan Mark Davis’ nonprofit, Abundance International, has helped orphanages in two Ukrainian cities for years. The Russian invasion has made its work more important than ever, he said.