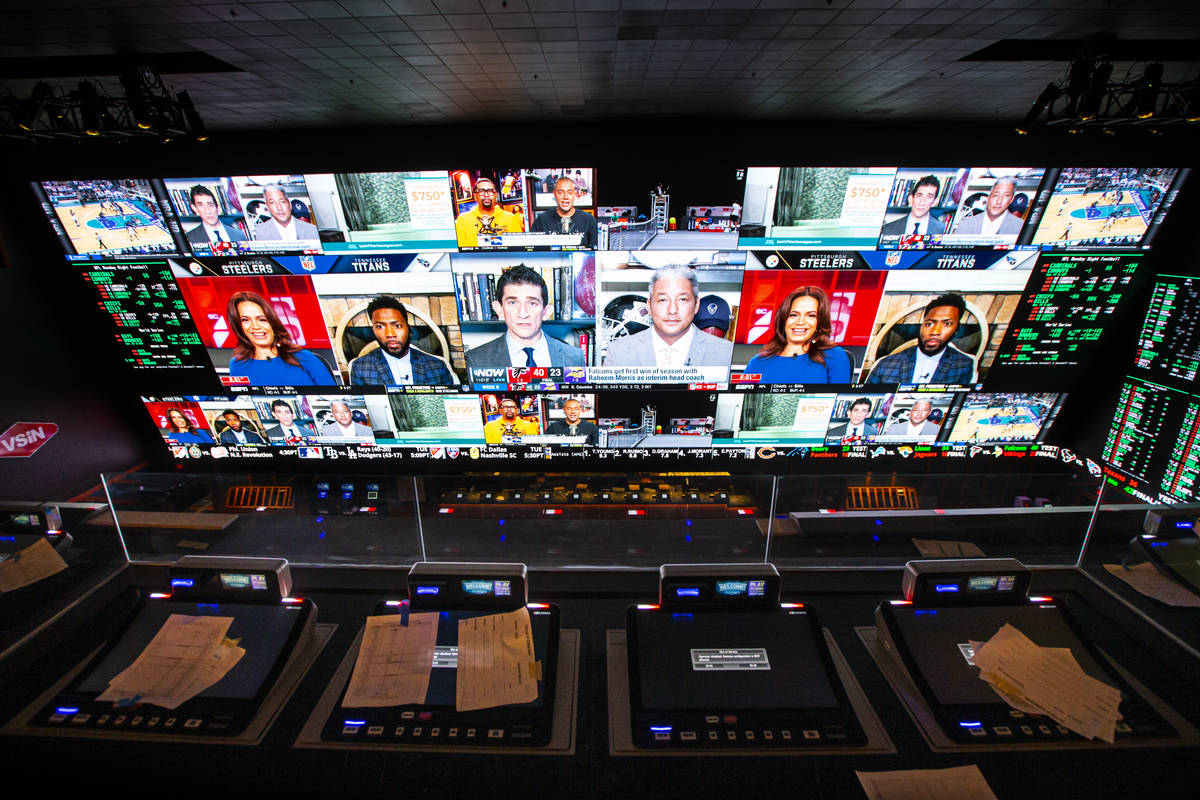 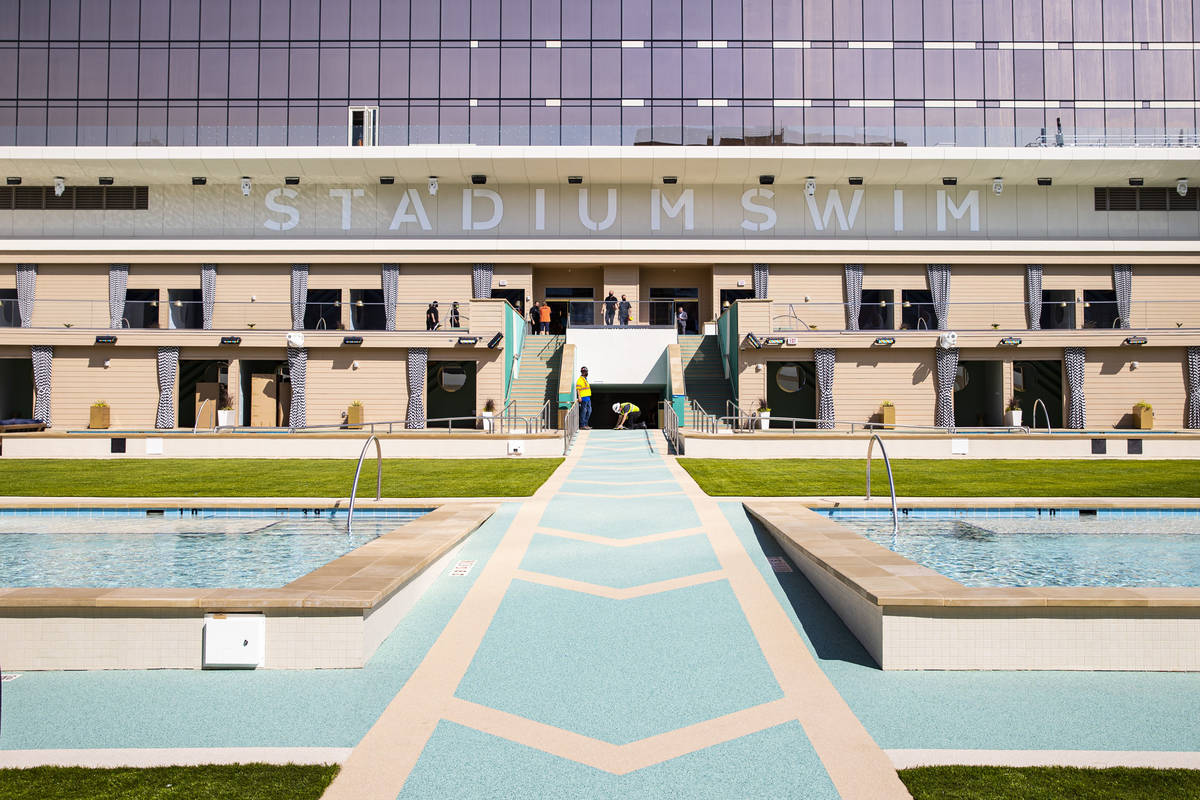 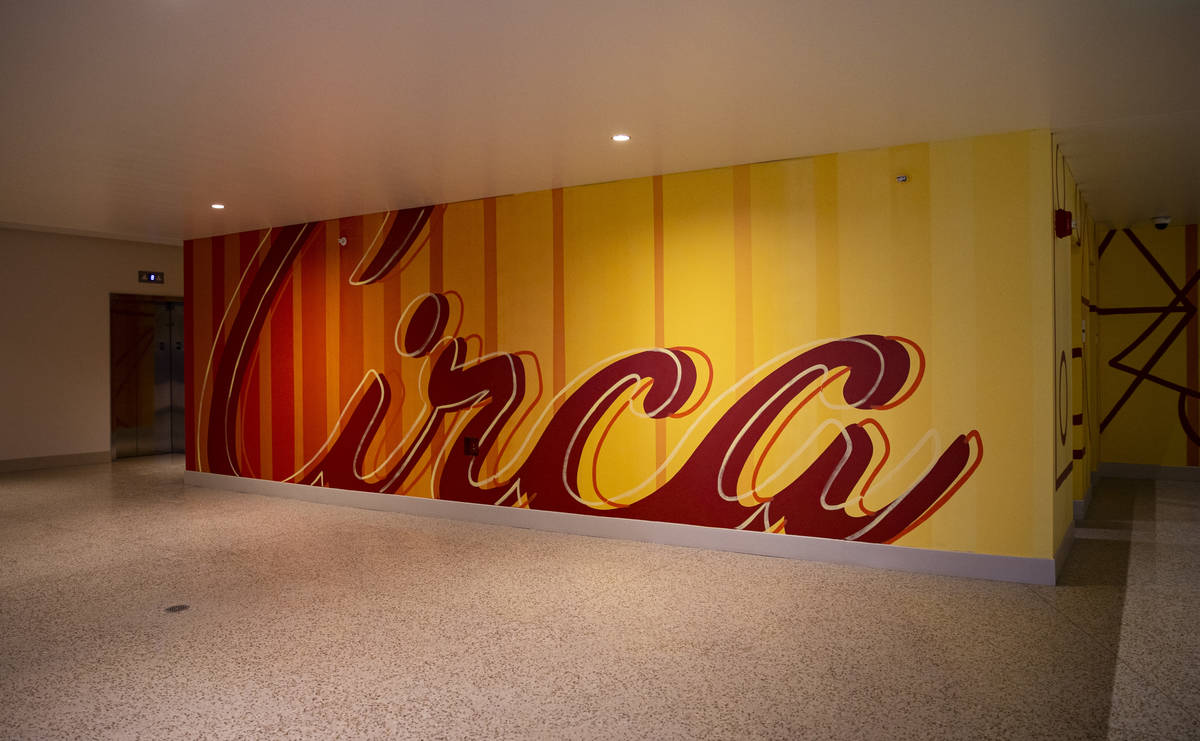 Signage for Circa on the first floor of Garage Mahal at Circa, the first from-the-ground-up casino built in downtown Las Vegas in 40 years, on Monday, Oct. 19, 2020. (Chase Stevens/Las Vegas Review-Journal) @csstevensphoto 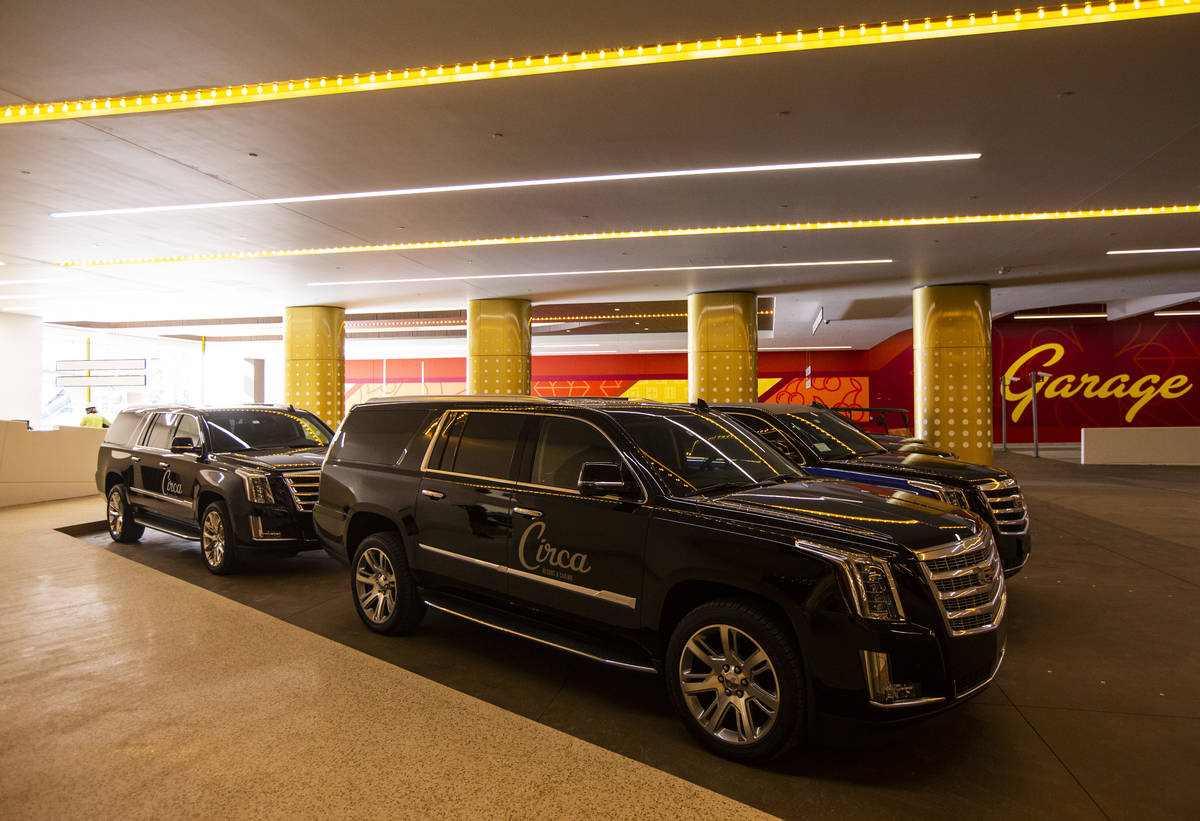 Circa fleet vehiclles are seen during a tour of Garage Mahal at Circa, the first from-the-ground-up casino built in downtown Las Vegas in 40 years, on Monday, Oct. 19, 2020. (Chase Stevens/Las Vegas Review-Journal) @csstevensphoto 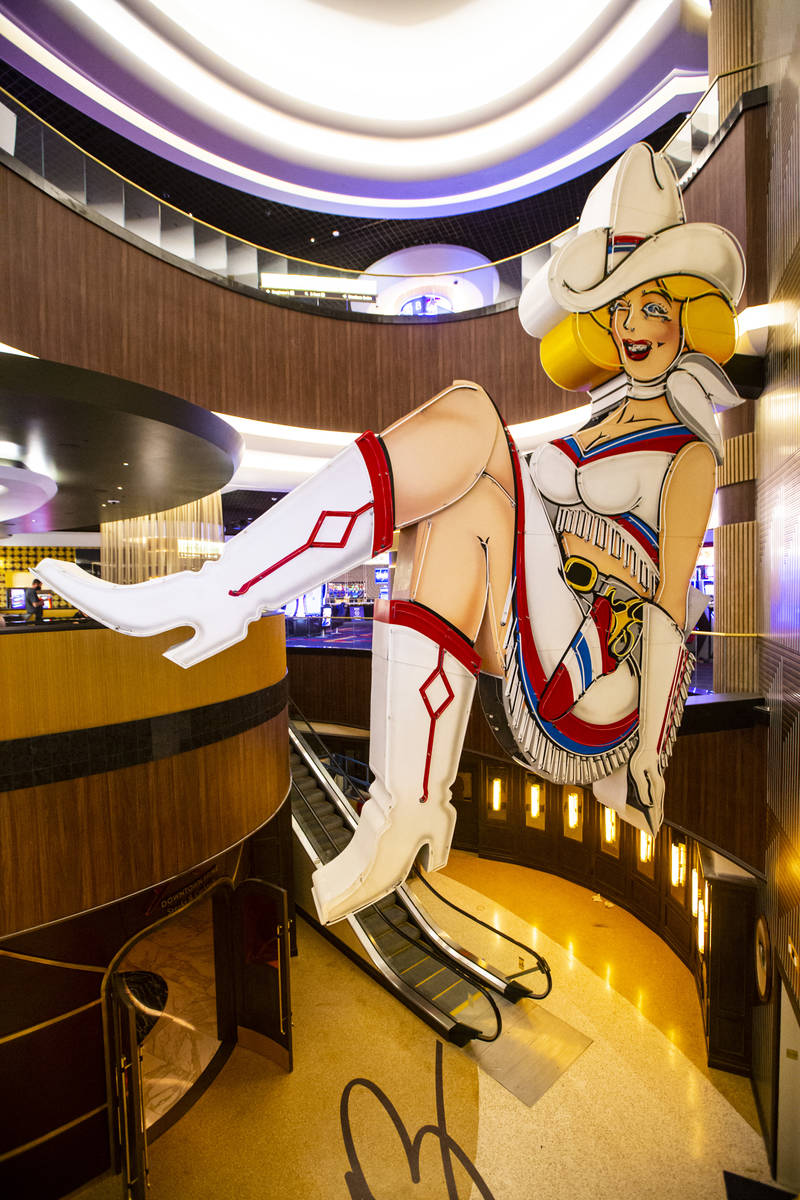 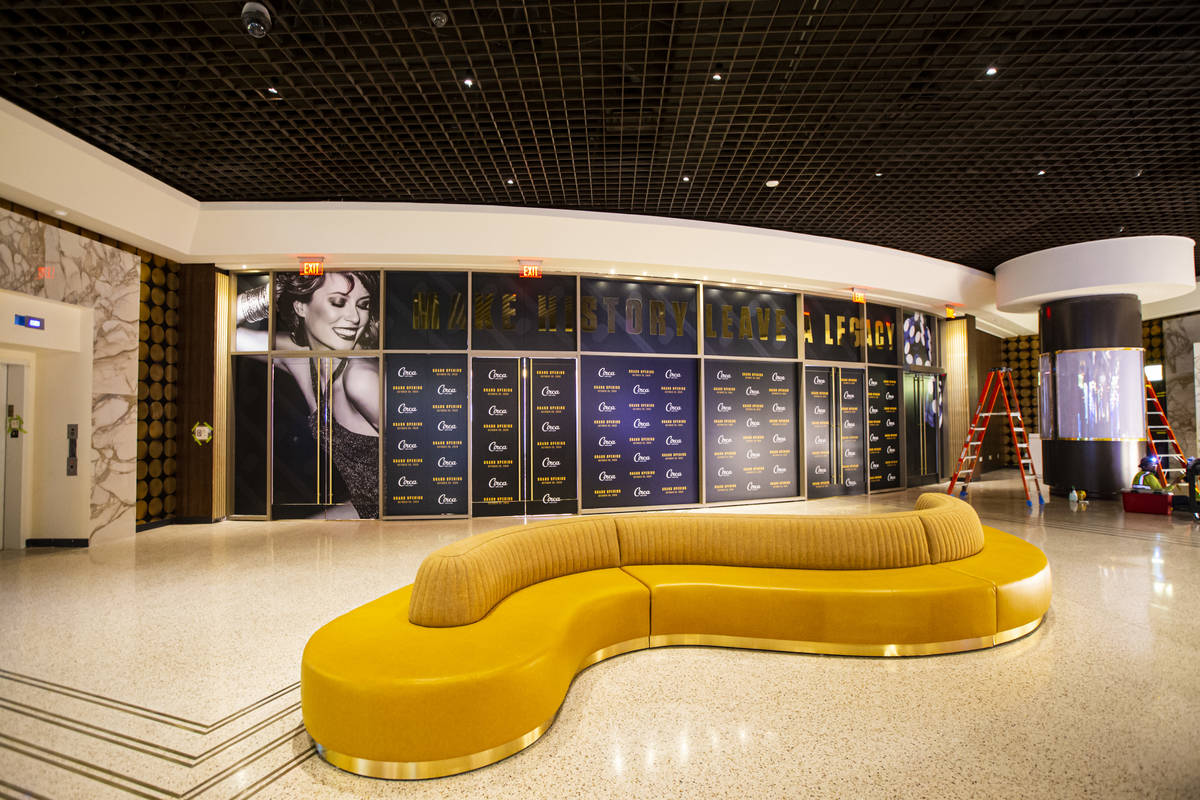 Seating at the lobby is seen during a tour of Circa, the first from-the-ground-up casino built in downtown Las Vegas in 40 years, on Monday, Oct. 19, 2020. (Chase Stevens/Las Vegas Review-Journal) @csstevensphoto 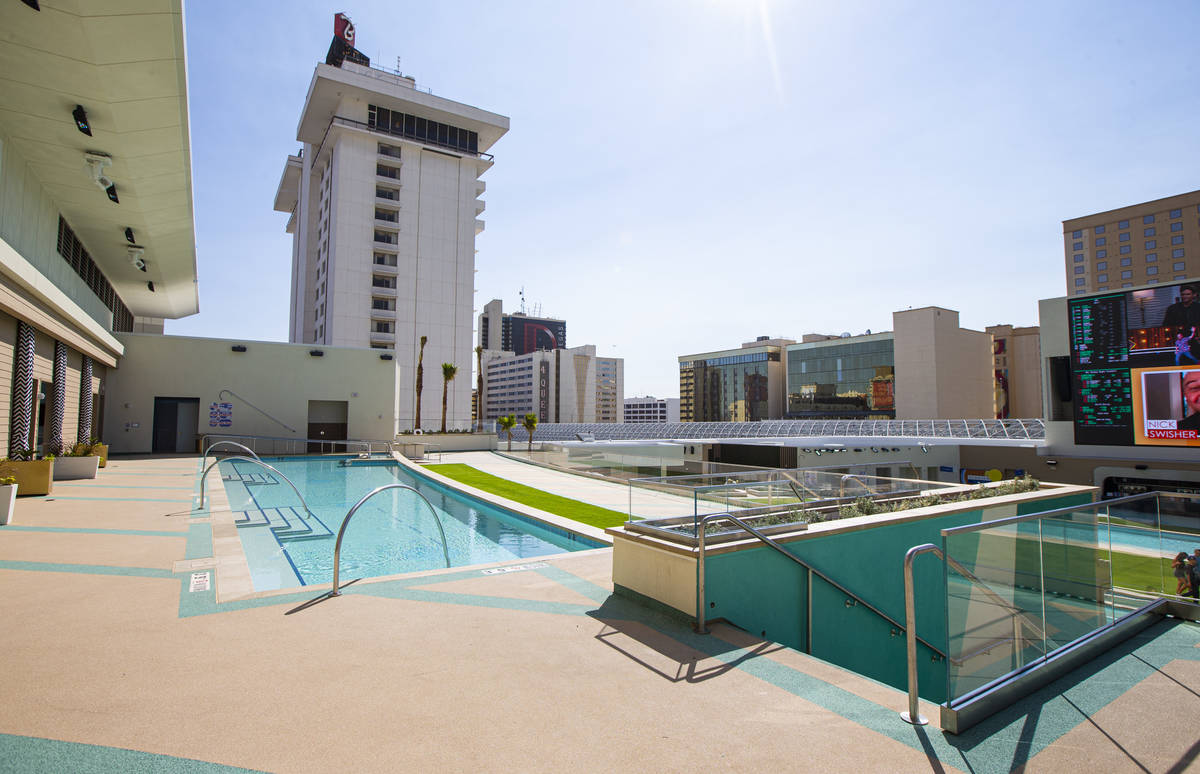 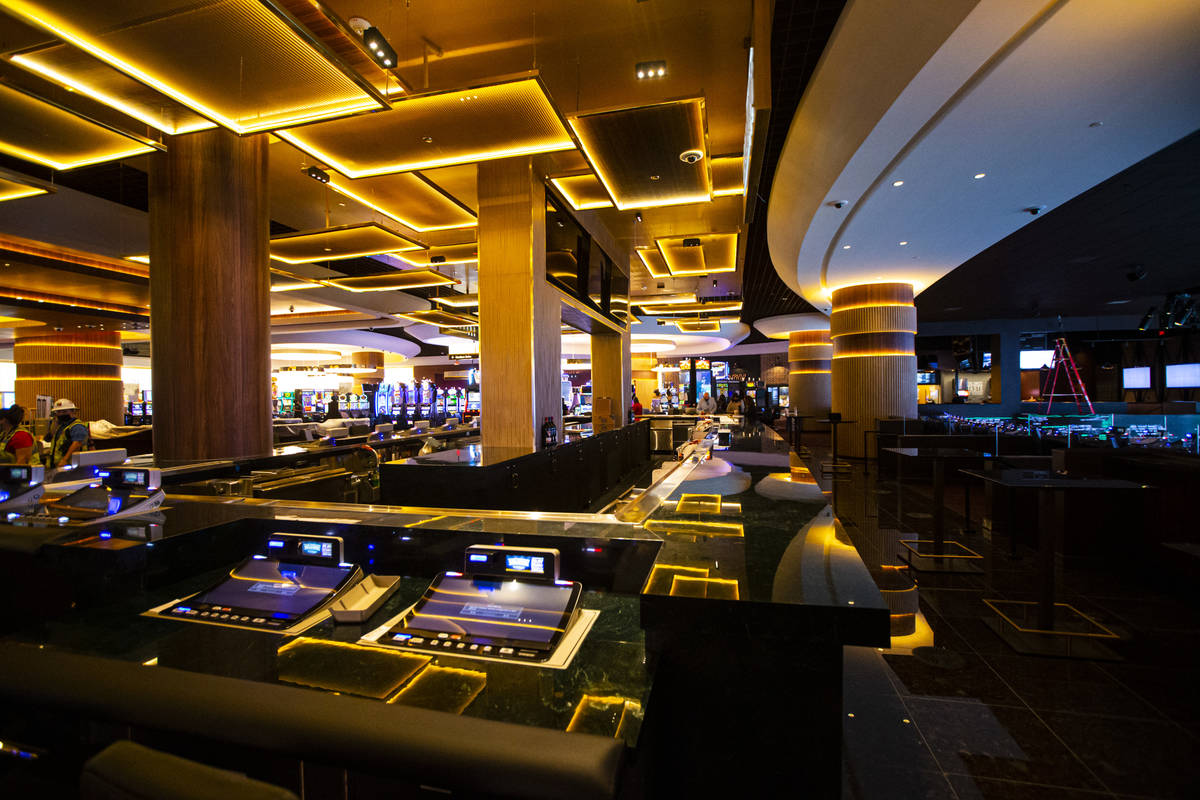 The Overhang bar is seen during a tour of Circa, the first from-the-ground-up casino built in downtown Las Vegas in 40 years, on Monday, Oct. 19, 2020. (Chase Stevens/Las Vegas Review-Journal) @csstevensphoto 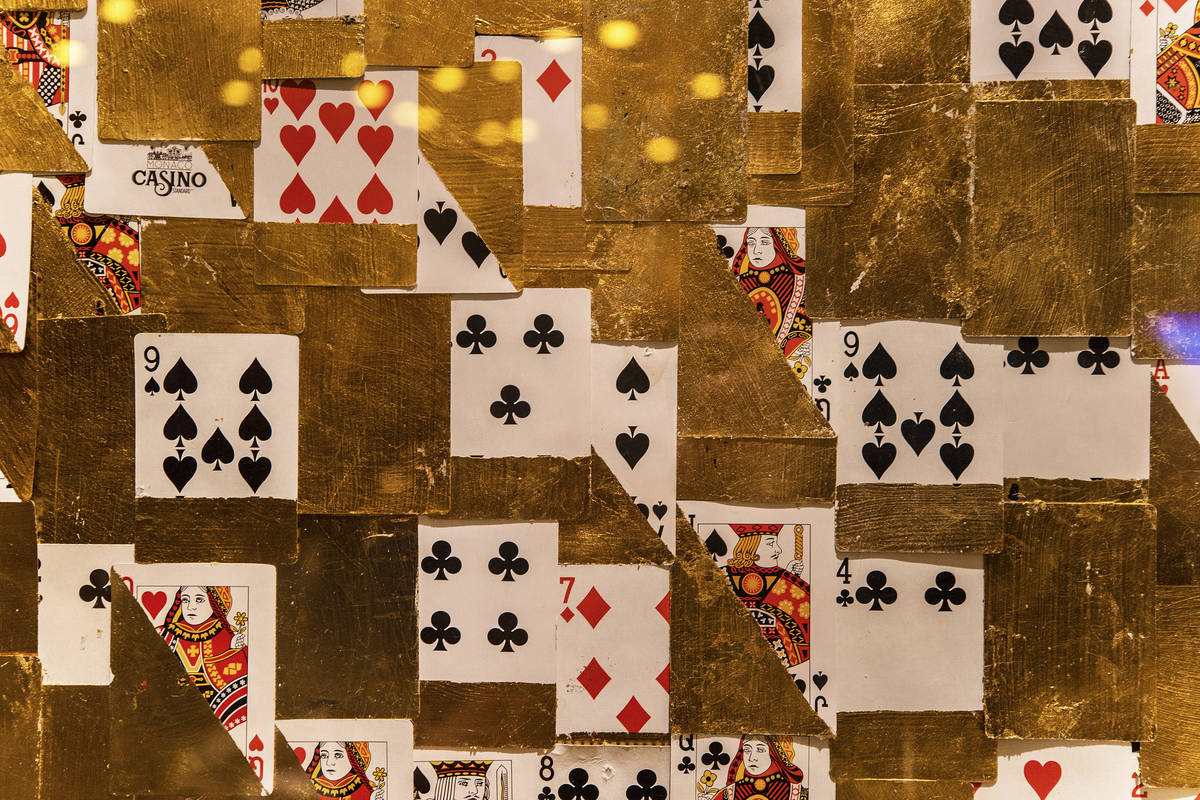 But the extravagant parties — often accompanied by VIP guest lists, fireworks and performers — are more than just an excuse to pop a few bottles of champagne. They’re a casino’s first chance to make an impression and kick-start operations, and could affect customer relations down the road.

Circa’s grand opening Tuesday night will look different from those of the past due to the pandemic, but industry experts still have high expectations for the event. Many say it’ll have a positive impact not only on the casino, but downtown as a whole.

“I hope people understand the importance and meaning of this property opening,” said Nehme E. Abouzeid, president of consulting firm LaunchVegas. “Las Vegas is alive and well and reinvesting.”

One and only chance

Circa opens to the public at 12:01 a.m. Wednesday, following a Tuesday night black-tie celebration with an exclusive guest list.

Grand openings like this tend to set the tone for the properties, according to Josh Swissman, founding partner of Las Vegas gaming and hospitality consulting firm The Strategy Organization.

That’s critical, especially in a time when Las Vegas casinos are vying for visitors.

“You want to give (guests) a great first impression to that property,” Swissman said. “You never get a second chance.”

Alan Feldman, a distinguished fellow at UNLV’s International Gaming Institute, has attended roughly 20 casino openings. He said these events let operators market their new casinos brand, establish their reputation and get some buzz on the property going.

If done right, these events can leave a lasting impression. Jan Jones Blackhurst, former Las Vegas mayor and Caesars Entertainment Corp. board member, says she even remembers what she wore to nearly every casino opening she has attended.

“It brings the community together, but it’s also a product launch,” she said. “It’s a big deal.”

Casinos have historically gotten that point across with fireworks, food and entertainment.

Low visitation rates in Las Vegas, social distancing measures and capacity restrictions mean Circa’s grand opening will look different from typical openings, but Feldman and others still expect it to be a hit.

“I expect (Circa’s opening) to be far less manic than openings in the past,” he said.

Good news in a pandemic

Before the pandemic hit, crowds at casino openings could be overbearing.

Feldman, who spent nearly 30 years as a senior executive with MGM Resorts International, recalled the 2016 opening of MGM National Harbor in Maryland. Too many people ended up hitting the road to check out the new casino, and highway patrol had to issue alerts advising people not to go.

That shouldn’t be a problem with Circa’s opening. In addition to the pandemic hindering capacity limits, the property’s casino will not be opening in conjunction with its hotel, which will likely deter some visitors.

The 777-room hotel tower isn’t set to open until Dec. 28. However, guests staying at Circa’s sister properties, the Golden Gate and the D Las Vegas — also owned by Derek Stevens — will receive perks when visiting Circa, such as early and free access to Circa’s pool amphitheater.

This split opening could mean downtown’s newest adult playground loses a “bit of buzz” when celebrating its opening, Abouzeid said, since the property will initially be unable to host travelers. It also faces limited out-of-state customers, since many travelers are still uncomfortable flying amid the pandemic.

Abouzeid also questioned whether the property will lose some drive-in and local customers who would be more comfortable waiting for the initial crowds to cool before visiting to ensure social distancing.

“It’s obviously going to be challenging, in this environment,” he said. “Elements like the gigantic sportsbook and pool, some of those will be more subdued as well due to spacing.”

But Brendan Bussmann, director of government affairs for Las Vegas-based Global Market Advisors, said the capacity restrictions could end up being a boost to the property’s initial success. While he doesn’t expect to see lines of patrons out the door of the property this week, he said that means curious gambler’s visits will stretch throughout the casino’s first few weeks of operations.

“You’ll see that euphoria (from the opening) last a little longer,” he said.

Feldman said the split opening between the casino and the hotel will also give the property an advantage by allowing it to ramp up its operations over time, instead of having to worry about perfecting both operations at once.

Feldman also believes the timing of the casino’s opening could lead to “incredibly motivated” staff, since a staggering percentage of casino workers have faced staggering unemployment rates over the past few months. In the Las Vegas metropolitan area, jobs in the leisure and hospitality sector were down by 25 percent year over year last month, the highest drop of any sector, according to the Department of Education, Training and Rehabilitation.

That excitement could spread to the guests as well, according to Amanda Belarmino, an assistant professor at UNLV’s college of hospitality.

“The local and visitor community would like something happy right now. We need good news; we need something exciting,” she said. “It’s a morale boost the city needs right now.”

There’s no doubt that Circa’s grand opening will be different due to current circumstances, but casino experts say owner Stevens will make sure his latest property’s opening celebration is special.