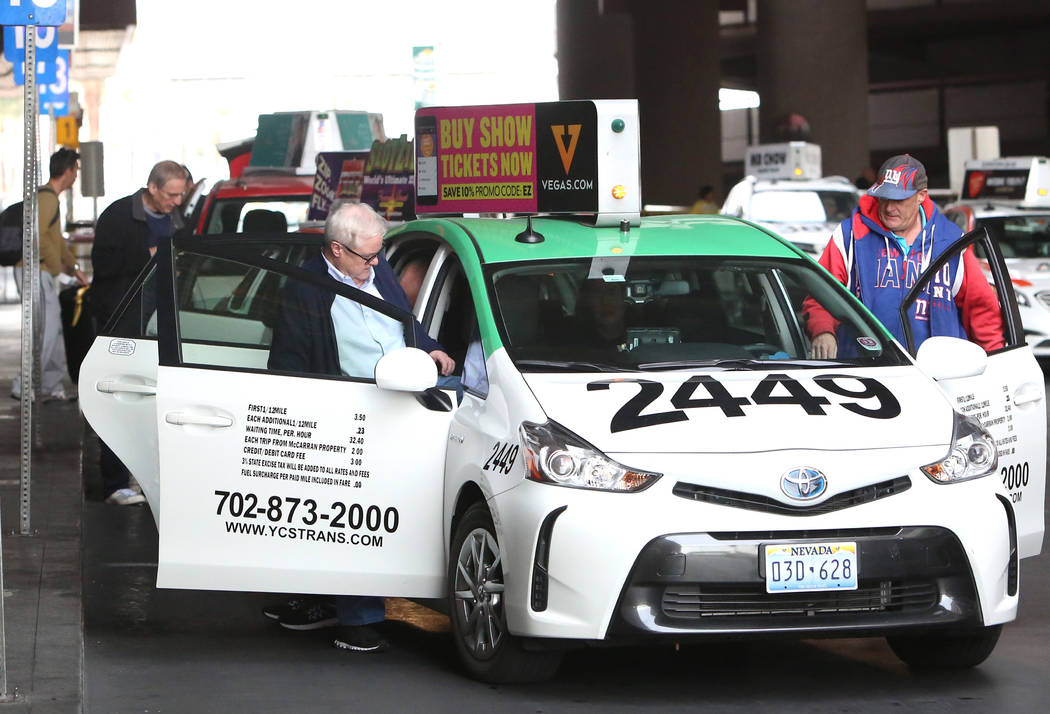 After a half-century of service in Las Vegas, Frias Transportation is officially on its way out after the state Taxicab Authority approved the sale of its assets. (Bizuayehu Tesfaye/Las Vegas Review-Journal @bizutesfaye)

After a half-century of service in Las Vegas, Frias Transportation is officially on its way out after the state Taxicab Authority approved the sale of its assets.

Two groups of buyers bought varying portions of Frias’ vehicles, medallions — small license plates affixed to cabs authorizing them to operate within a jurisdiction — and certificates of public convenience and necessity related to the five Frias-owned cab companies.

The deals will be finalized on March 13, the last day Frias will be in operation.

Newcab acquired 928 vehicles in the deal and originally planned to acquire the same amount of medallions from Frias. The authority ordered that 12 medallions be withheld to keep Newcab’s medallion ownership at 49 percent of the total allocated by the Taxicab Authority.

The 12 medallions, all associated with Ace Cab, will be held by Frias until its March 13 closing date, as Newcab figures out a solution for those.

The solution could arise from an amendment to the current Nevada law that disallows an ownership group from owning more than 49 percent of the Las Vegas taxicab medallions.

Johnathan Schwartz, director of Newcab, said the acquired vehicles and medallions will operate under the Newcab name.

“We’re going to be doing business as Newcab for the time being,” Schwartz said. “That will be the brand the four (ownership groups) will operate under.”

Yellow Checker Star will continue to operate as its own separate company, Schwartz said.

Meanwhile, Blue Desert, a partnership between Whittlesea-Bell Transportation and Desert Cab, purchased the Frias-owned Virgin Valley Cab and its 132 vehicles.

The plan is to have as many drivers who are under the Frias umbrella now transfer over to the acquiring companies.

“We’ve had a lot of interest so far,” Bell said. “We’ve actually already had some come over to work for one of our other entities, Whittlesea Blue Cab, Henderson Taxi and my partner Desert Cab. So, a lot of that has already begun.”

The acquisitions will allow for the cab industry to be more connected and bring more cab companies under the same dispatch center.

The move allows for the service to be more streamlined and better compete with transportation network companies such as Lyft and Uber, Schwartz said.

In 2017, Yellow Checker Star rolled out its Kabit universal dispatch system, which allows a customer to order a cab at over 400 businesses citywide by simply pressing the Kabit button, which is connected to the businesses’ Wi-Fi or cellphone connection.

Once the technical aspects are installed in the newly acquired vehicles, 80 percent of Las Vegas taxicabs will be running out of the same dispatch center and available for order via the Kabit system.

Since Kabit’s rollout in 2017, the number of riders using the new technology has risen each month, Schwartz said.

With the cab industry coming together like it has recently, especially after Thursday’s transactions, Bell is confident on the taxi industry’s future.

“We’re acknowledging that we’re way down, but I think we’ve hit rock bottom,” Bell said. “We think that we’ve come a long way in the last couple of years in trying to reinvent ourselves to provide better cab service and provide better jobs for out drivers. We’ve got technology not being used anywhere else. There’s some exciting things going on and we’re bullish on the cab industry in the future.”