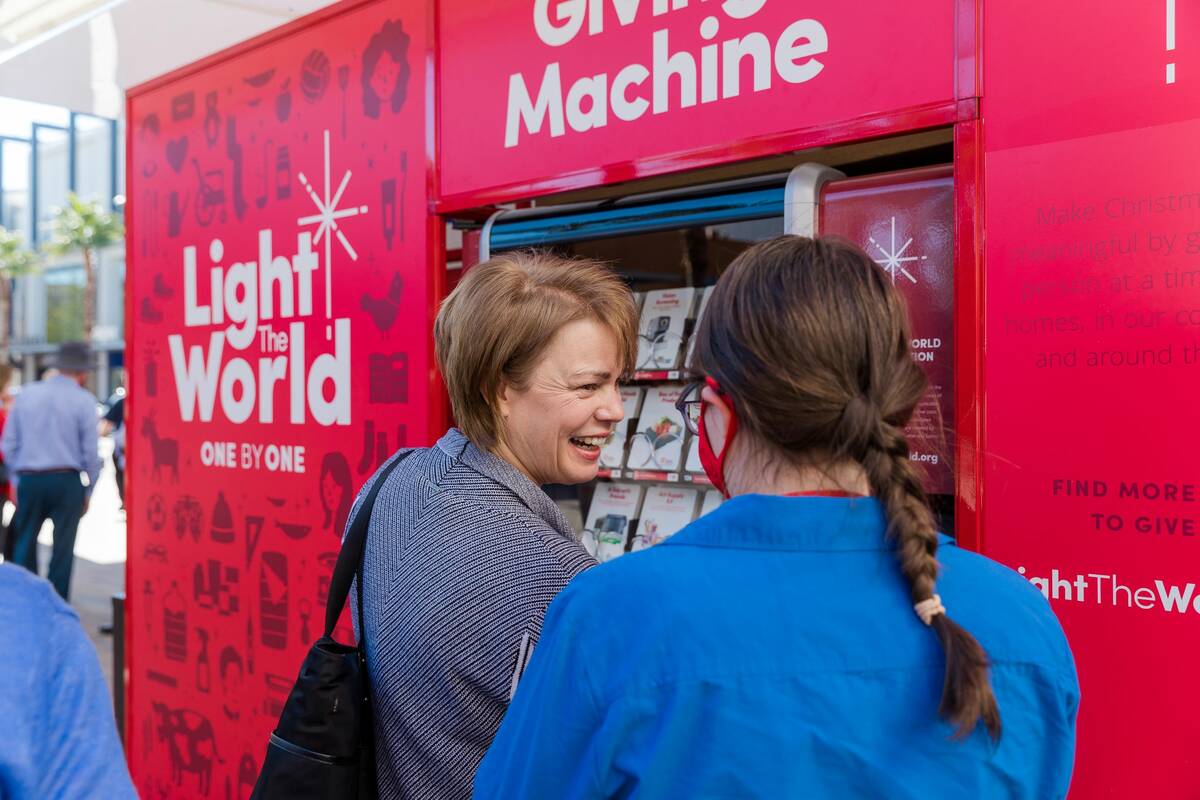 President of Latter-Day Saint Charities Sharon Eubank visits the Giving Machine, a donation initiative sponsored by the charity that encourages donors to support local and international causes through "items" purchased for the charities, on Tuesday, Nov. 30, 2021 at Downtown Summerlin. (Courtesy of Andrea MacKay) 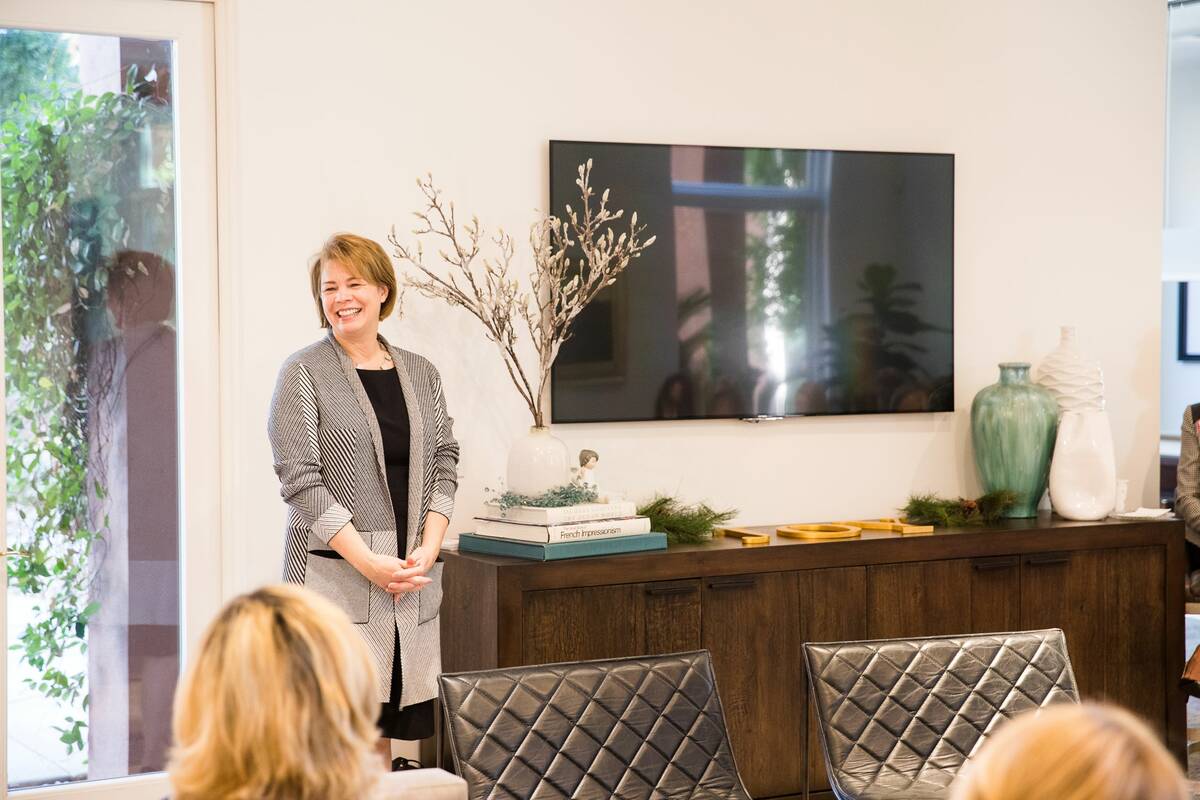 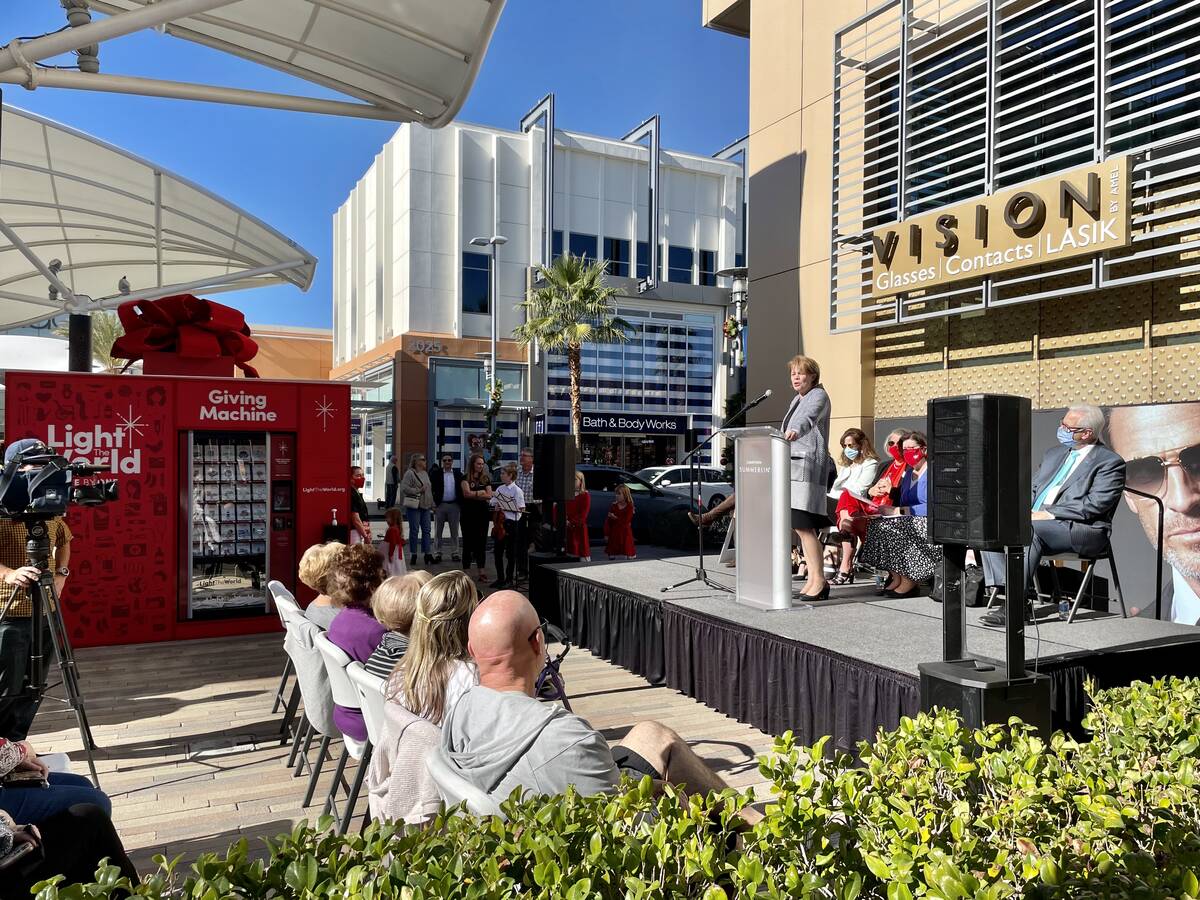 President of Latter-Day Saint Charities Sharon Eubank speaks beside the Giving Machine, a donation initiative that encourages donors to support local and international causes through "items" purchased for the charities, on Tuesday, Nov. 30, 2021 at Downtown Summerlin. (McKenna Ross/Las Vegas-Review Journal)

At the Giving Machine — which lets donors give gifts of various values to local and international charities — sponsors and beneficiaries of the seasonal project discussed what a contribution means on Giving Tuesday, an annual event following the five-day Thanksgiving shopping weekend that focuses on generosity and nonprofit support. They also provided an update on funds raised so far through the machine.

President of Latter-day Saint Charities Sharon Eubank, whose organization sponsors the machine through logistics and credit card fees, called for people to use Giving Tuesday as a way to refocus what it means to give.

“You don’t need to be wealthy and have a lot of money to be able to effect change in your community,” Eubank said. “I think volunteerism, your time, is another currency. People who don’t have any money may have time. Sometimes that’s the greatest thing you can give somebody, just sit with them for an hour.”

The Giving Machine has raised about $200,000 in about three weeks, said Joyce Haldeman, director of the Greater Las Vegas Communication Council for the Church of Jesus Christ of Latter-day Saints. The amount is slightly ahead of where it was at this point in 2019, when it first arrived in Las Vegas.

Haldeman emphasized the value raised is not as important as the awareness generated when someone is seen giving at the vending machine. She noted the most popular donations thus far are for chickens, provided to families abroad through Church World Service Global, and for meals provided to Three Square.

“You watch your children choose what it is they’re going to sponsor, you push the buttons and you watch the card drop to the end of the (machine),” Haldeman said. “You don’t get to take anything home — it’s not like buying a candy bar — except a feeling that you made a big difference and how you were able to help someone else.”

Eubank said a lesson in philanthropy learned throughout the past two years is that making meaningful change is worth more than funds generated.

“What actually changes the issue is invested people,” Eubank said. “People who care enough to say, ‘Let’s not spend money on that. Let’s move it over here,’ and actually shape the way cash is spent.”

“It’s a recipe and cash is part of the recipe, you gotta have it,” she added. “But there’s a whole bunch of other ingredients to make that cake rise.”

The Giving Machine is in Downtown Summerlin, across from Macy’s, through Jan. 3.