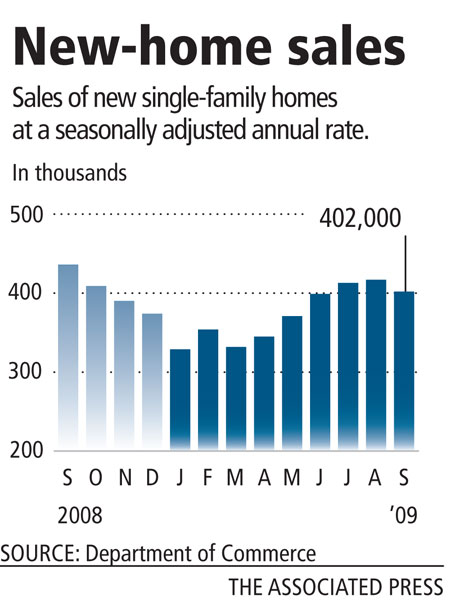 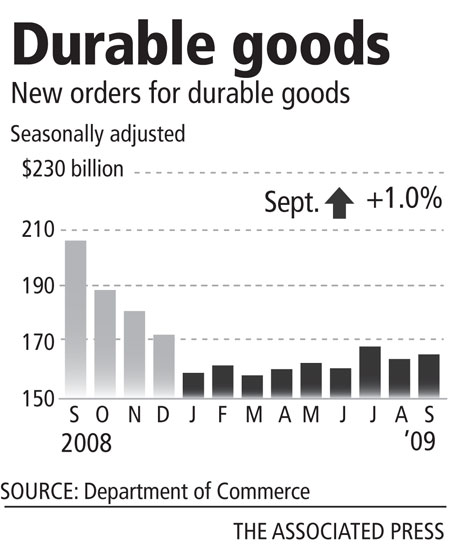 WASHINGTON — The number of buyers snapping up new homes dipped unexpectedly last month as the effects of a temporary tax credit for first-time owners started to wear off.

The 3.6 percent drop in September’s new-home sales, reported by the Commerce Department on Wednesday, was the first decline since March and a distinct sign of weakness in a market that had rebounded strongly over the summer.

On the positive side, however, the government reported that orders to U.S. factories for big-ticket manufactured goods rose 1 percent in September as demand for machinery offset weakness in commercial aircraft and autos.

Analysts suspect that the overall economy, as measured by gross domestic production, grew at an annual rate of 3.3 percent in the July-September quarter after contracting for a record four straight quarters. The third-quarter GDP report is due today.

The drop in new-home sales could help the lobbying campaign of real estate agents and homebuilders. They want Congress to extend the tax credit of up to $8,000 for first-time buyers.

“Seeing a number like this today, I think a lot of lawmakers will be pounding their fists on the table,” BMO Capital Markets economist Jennifer Lee said.

Even builders of more upscale homes that at are out of reach for many first-time buyers have felt the effect of the looming deadline. High-end builders market to move-up buyers who need to sell before they can buy a new house.

“The fact that the first-time homebuyer tax credit runs out is hurting,” said Bob Mitchell, chief executive of Rockville, Md.-based builder Mitchell & Best, who has gone from selling 80 to 100 homes annually to around 30 this year. “(Still) we’re at least selling something.”

Critics, however, say many buyers would have made their purchases anyway and call the credit an unnecessary subsidy for people who don’t need it.

New-home sales fell to a seasonally adjusted annual rate of 402,000 from a downwardly revised 417,000 in August. Thomson Reuters-polled economists had expected a pace of 440,000.

New-home sales, however, are still up 22 percent from the bottom in January, and analysts don’t expect them to recede too far.

Sales have begun to slow in Nevada as buyers realize they may already be too late to qualify for the tax credit, said Allen Morris, a senior vice president for Warmington Residential. The tax credit has been the major draw in the builder’s Nevada communities, where homes are priced between $150,000 and $225,000.

“We’re excited about the prospects of having the tax credit extended,” he said.

Sales in September were off 7.8 percent from a year ago and are down more than 70 percent from the peak in July 2005.