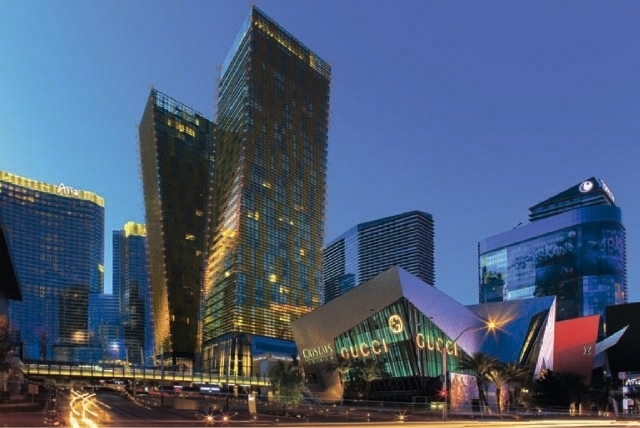 The exterior of Veer Towers is shown. Veer sold 70 units in the first half of 2013, including 14 in June alone, according to Pordes Residential Sales & Marketing, which is selling the towers for MGM Resorts. (Courtesy)

But did you know the Strip is catching up?

The last six months have brought a sales frenzy to the luxury high-rise condominium market on and around the resort corridor, with rising prices and tightening inventories we’ve seen in the city’s popular master plans.

In the last six months, 206 condos going for as much as $400,000 each closed after fewer than 60 days on the market, said Bruce Hiatt, broker-owner of Luxury Realty Group in Las Vegas. That pace is unheard of at a price point and home type that typically averages six to 12 months on the market, Hiatt said. What’s more, available supply has crept down from five months in January to less than four months now. There are even multiple offers on properties in the $300,000 to $400,000 range.

“We’re basically moving into what qualifies as a tight market,” Hiatt said.

It’s a radical change from 2008, when the Strip market crashed and left a glut of more than 1,000 units. Local research firm SalesTraq showed a 3½-year supply of condos back then, as jittery investors backed out en masse before closing.

It was that moribund market that welcomed CityCenter’s Veer Towers. The project, which opened in 2009, sold roughly a third of its 670 units before closings stalled. Developer MGM Resorts International cut prices, which started at $500,000 and went up to $12 million, by 30 percent in late 2009, and by another 25 percent in early 2012. Still, sales struggled: The two towers moved just 10 units in 2011, and six in 2012.

But things are different today: Veer sold 70 units in the first half of 2013, including 14 in June alone, according to Pordes Residential Sales & Marketing, which is selling the towers for MGM Resorts.

Thank a surging stock market for part of the turnaround, said Jim Navarro, Pordes’ vice president of residential sales and marketing. The Dow Jones industrial average has more than doubled, from 6,547 in March 2009 to 15,522 on July 29. That wealth effect means more people feel they can buy, Navarro said. A big rebound in California real estate has helped, too, because about 80 percent of Veer’s buyers come from the Golden State.

But there’s a twist in this submarket revival: Cash buyers — read: investors — continue to dominate among suburban buyers, making up nearly 60 percent of purchases. On the Strip, just 15 percent to 25 percent are investors, depending on the project. At Veer, for example, 75 percent are buying a vacation home rather than a place to rent out for cash flow, Navarro said.

The improved sales are sustainable, at least in the near term, observers said.

For one thing, supplies will stay limited, because no one’s building or planning any new high-rises, Navarro said.

Plus, as Genting Group’s Resorts World Las Vegas and other big Strip projects get started or near completion, confidence will surge, Hiatt said.

“People want to see confirmation of more investment on the Strip. Seeing (Resorts World) start up will definitely be a catalyst for people jumping back in,” he said.

Witters said the deal was part of a wave of net office absorption in recent months, after four straight years of negative absorption. Still, at a vacancy average of about 24 percent, it’ll likely be at least three years before the local office market gets back to 2007 vacancy levels, Witters said.

TNP Acquisitions has been doing its part to soak up some of the city’s excess properties. The company owns four other local commercial properties, including the Clark County Department of Family Services building at 121 S. Martin Luther King Blvd., and the 176,508-square-foot Buffalo Square shopping center at Washington Avenue and Buffalo Drive. It also has industrial and downtown office spaces in its portfolio. TNP has even dipped its toe into residential real estate: The company owns and leases three units inside Turnberry Towers on Paradise Road.

TNP’s local brokerage subsidiary, Commerce TNP, represented the company in the McCarran Corporate purchase. The park was 68 percent leased at closing in late July, with tenants that include Carrington College, United Heathcare Services and AARP.

And brokers Rob Lujan and Jason Simon represented landlord CSFB 2005-C3 Hills Drive Office in its 61-month lease renewal of a 4,195-square-foot medical office space at 880 Seven Hills Drive. Zachary B. Truman, DMD, reupped his lease inside the Seven Hills Business Center in a deal worth $513,495.