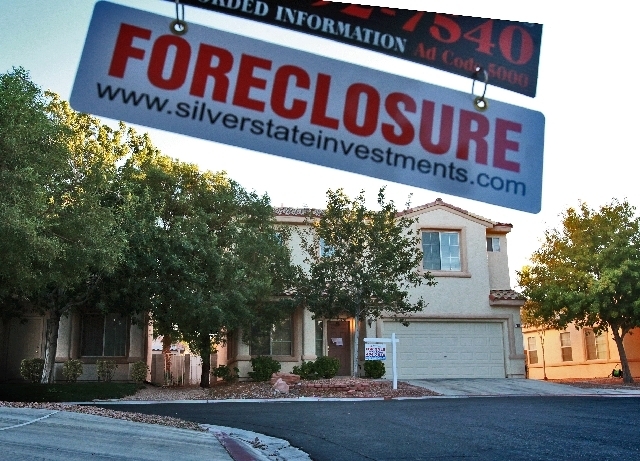 Get ready for another case of housing whiplash.

Observers on both sides of “The Homeowner’s Bill of Rights” agree it’ll throw another kink into Nevada’s moribund foreclosure segment. The question is what’s more important: Protecting homeowners who are behind on payments or promoting speedy recovery of the state’s housing market?

It’s a big conundrum in a state where foreclosures and short sales made up 56 percent of closings in August, according to California research firm RealtyTrac. It’s also a concern in a city where roughly 40,000 single-family homes sit empty amid a severe shortage of homes for sale. The Las Vegas Valley has less than two months of home inventory available — it’s six months in a healthy housing economy — and the shortage has helped distort the market, driving median prices up more than 30 percent year-over-year.

“Some people say this law is a good idea because it slaps the hands of banks and keeps them in line, and from that perspective, I agree,” said Dennis Smith, president and CEO of Home Builders Research in Las Vegas. “However, there were already laws in place for banks to follow. I think we’re over-legislating the recovery.”

But shielding homeowners is at least as vital as promoting housing recovery, said Troy Atkinson, a Las Vegas attorney who represents homeowners. For owners behind on their payments, the new law is a “game-changer,” he said.

“It’s not only going to force banks to review homeowners’ application for assistance, but give them a fair chance to get something done,” he said.

Here’s what the law requires: After Tuesday, your bank will have to notify you 30 days before it files an initial notice of default to start foreclosure. It must try to contact you at least three times at different hours on different days.

The bank also must tell you about alternatives to foreclosure, such as short sale or mortgage modification. When you apply for a modification, it’ll have to give you written confirmation that it received your packet. Then the bank will have 30 days to decide on your request. If it needs more documents, it must give you 30 days to come up with them. And you get to appeal a decision if it’s not in your favor.

Atkinson said that means an end to banks constantly “losing” modification applications, or calling off deals when homeowners can’t produce supporting paperwork within a day or two.

Plus, the law bans banks from dual tracking, or trying to foreclose while also working out a short sale. Nor can they require proof that you don’t know the person you’re short-selling to. So after Tuesday, you could short-sell to a friend or relative, then buy back your home as a way to lower your principle – a move banks resist because homeowners might sign for a mortgage knowing they can later collude to renege.

What doesn’t change? The Nevada Association of Realtors says the bill of rights won’t let you stay in your home longer without making your payments. Nor will it apply to community banks or credit unions that have foreclosed on 100 or fewer homes in Nevada.

Banks are actually on board with the law, said Bill Uffelman, president and CEO of the Nevada Bankers Association. They helped write parts of it, including the carve-out for smaller institutions and the documentation of attempts to reach homeowners. They also got legislators to agree that big banks complying with a settlement with the state attorney general already technically follow the bill of rights. Those banks include Wells Fargo, Bank of America, Citibank and Chase.

Bankers even see positives in the strict requirements for documenting contact with homeowners. Plenty of borrowers “game” the system, Uffelman said, trying to delay foreclosure by not responding to banks. Homeowners also get just one chance to work out an alternative. If they don’t respond within 14 days, the offer is off the table.

The real problem, Uffelman said, is that the bill of rights is yet another in a long line of laws and regulatory tweaks keeping banks from foreclosing and the market from returning to normal. He pointed to foreclosure trends driven by each new law, as banks hit the pause button to digest the changes.

Notices of default ran at 4,000 a month in mid-2011. But in October 2011, a state law required signers of default papers to have personal knowledge of promissory note ownership. Notices plummeted to fewer than 100 a month. They crawled back up to 1,662 filings in April, but in June a law that loosened the personal-knowledge rule kicked in, and filings again fell to fewer than 100. They bounced back to 1,419 in August.

To Keith Lynam, legislative chairman of the Nevada Association of Realtors, those numbers prove nothing except that banks will grab any excuse to delay foreclosures. Federal rules say they don’t have to write off a home as a bad asset until they actually repossess it, so it’s in their interest to string things along, he said.

“We have had four months to review this law. It’s not a sophisticated law,” Lynam said. “It’s pretty black-and-white. I’m not sure how anyone with the banks’ financial and legal wherewithal can have so much trouble figuring out a law.”

Still, Uffelman and Smith said there’s no doubt notices will take a dive again in October, if only because the law requires a 30-day heads-up to borrowers before banks file foreclosure paperwork. How long it takes for foreclosures to come back is anyone’s guess, Smith said, but he noted default filings in California have yet to recover from a similar law that passed Jan 1.

“Those of us who thought there’d eventually be a bunch of distressed houses dumped on the market — well, it doesn’t look like that’s going to happen anytime soon,” he said.