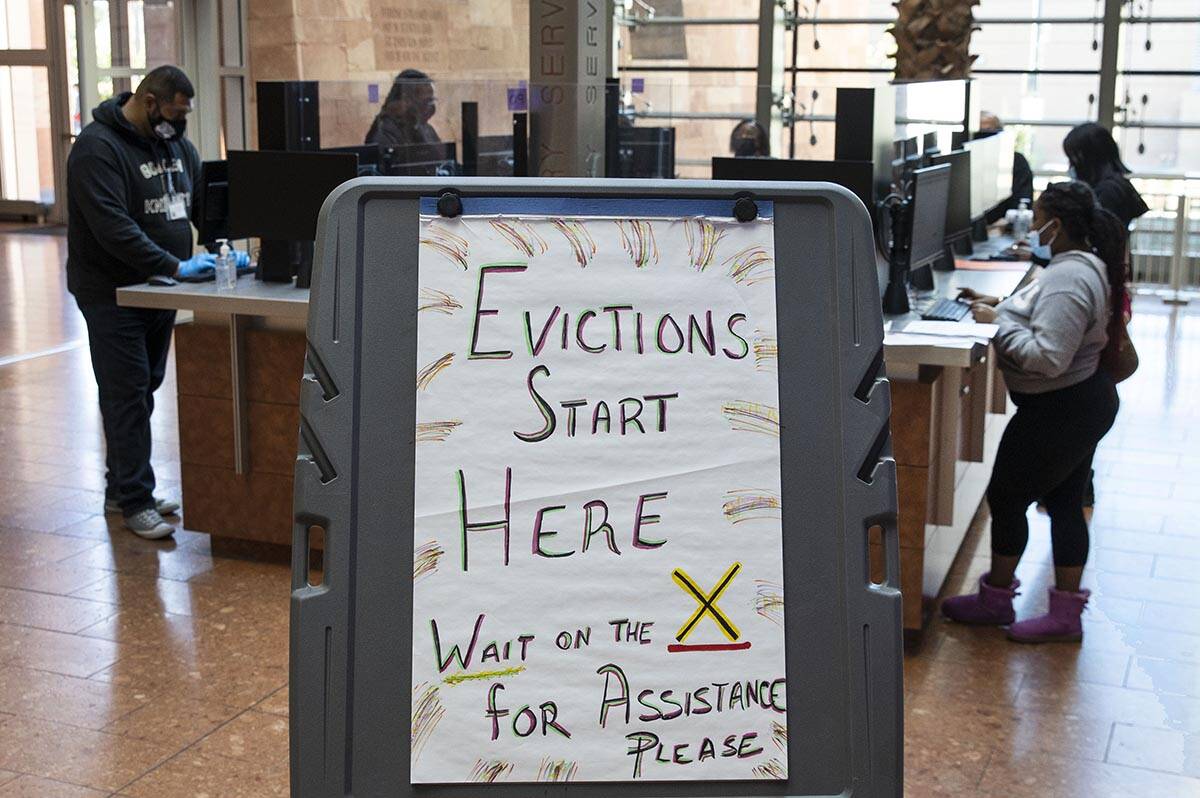 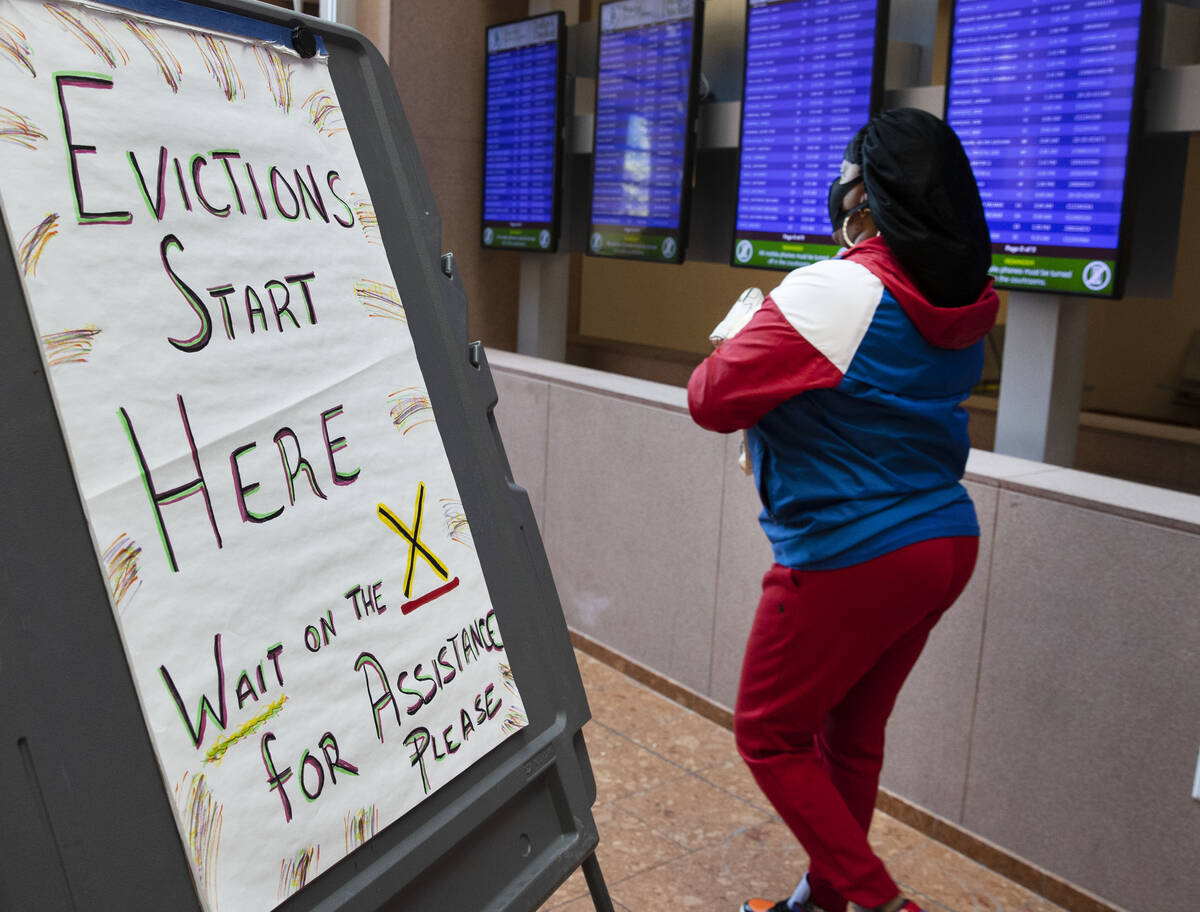 Akeba Anderson, who received an eviction notice from her landlord, arrives at the Civil Law Self-Help Center at the Regional Justice Center, on Monday, Nov. 16, 2020, in Las Vegas. (Bizuayehu Tesfaye/Las Vegas Review-Journal) @bizutesfaye 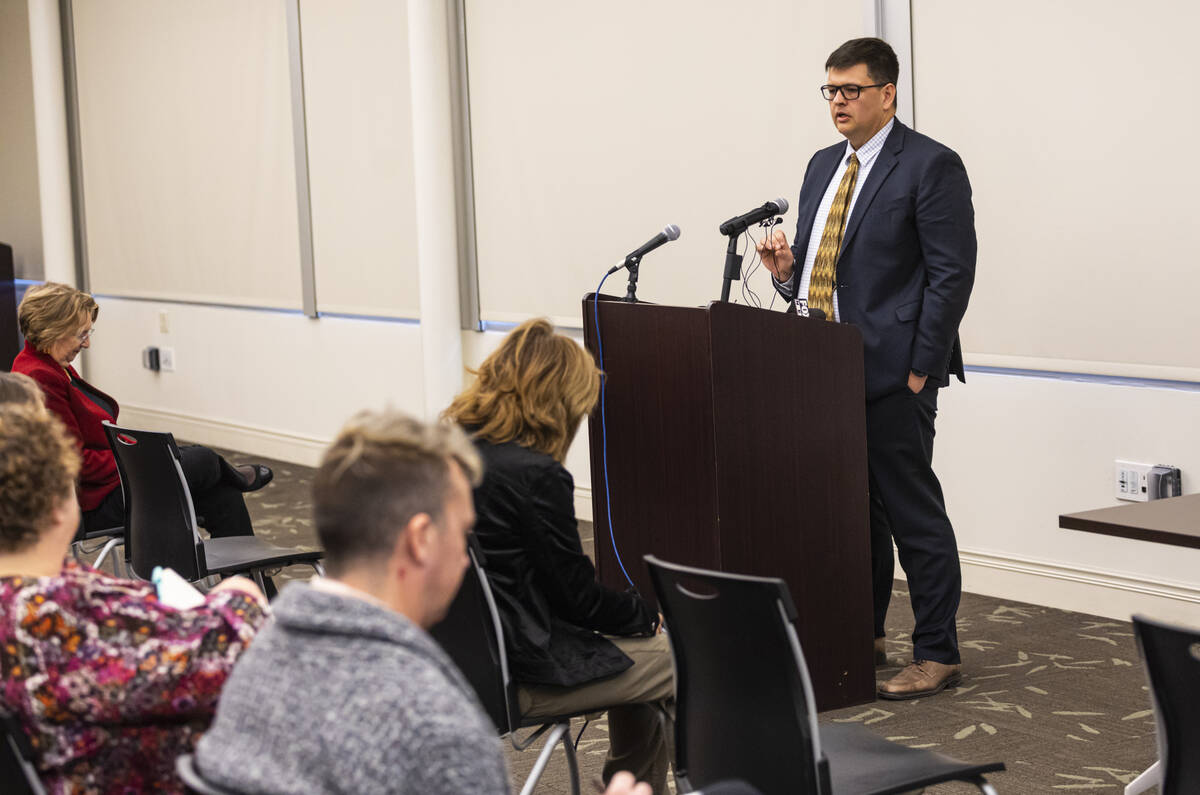 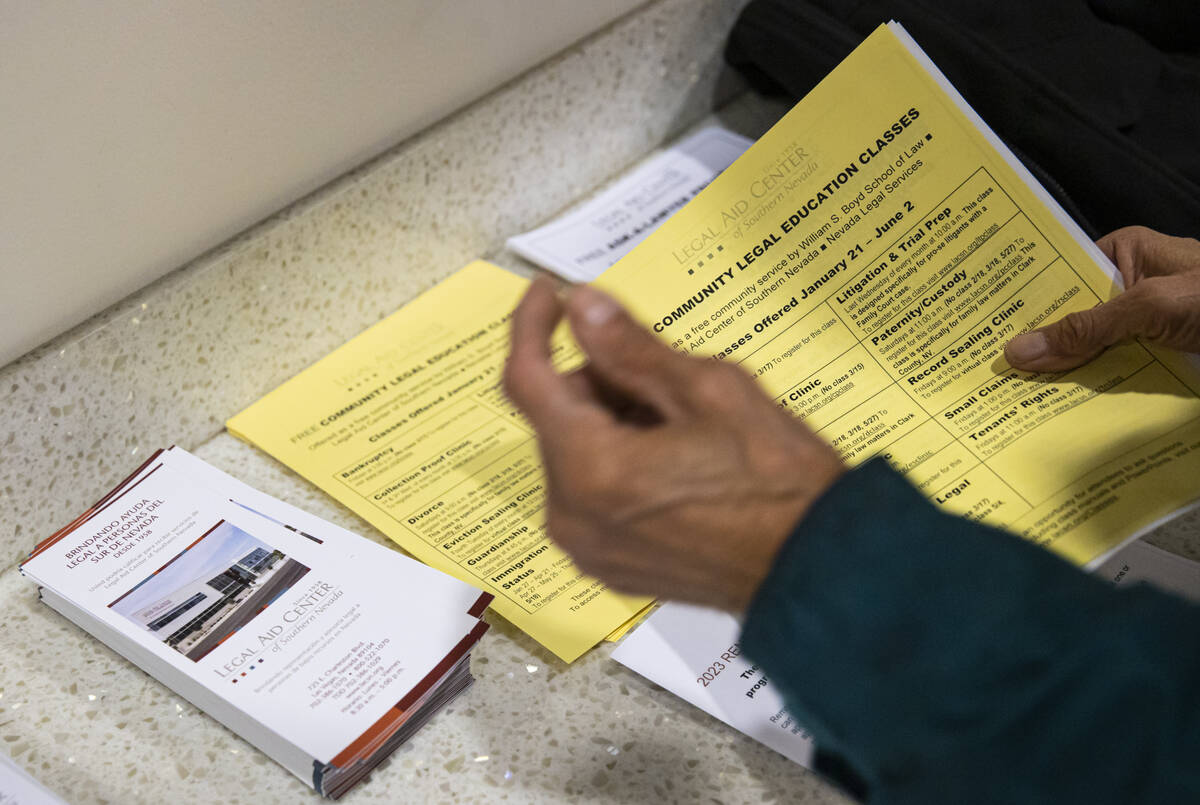 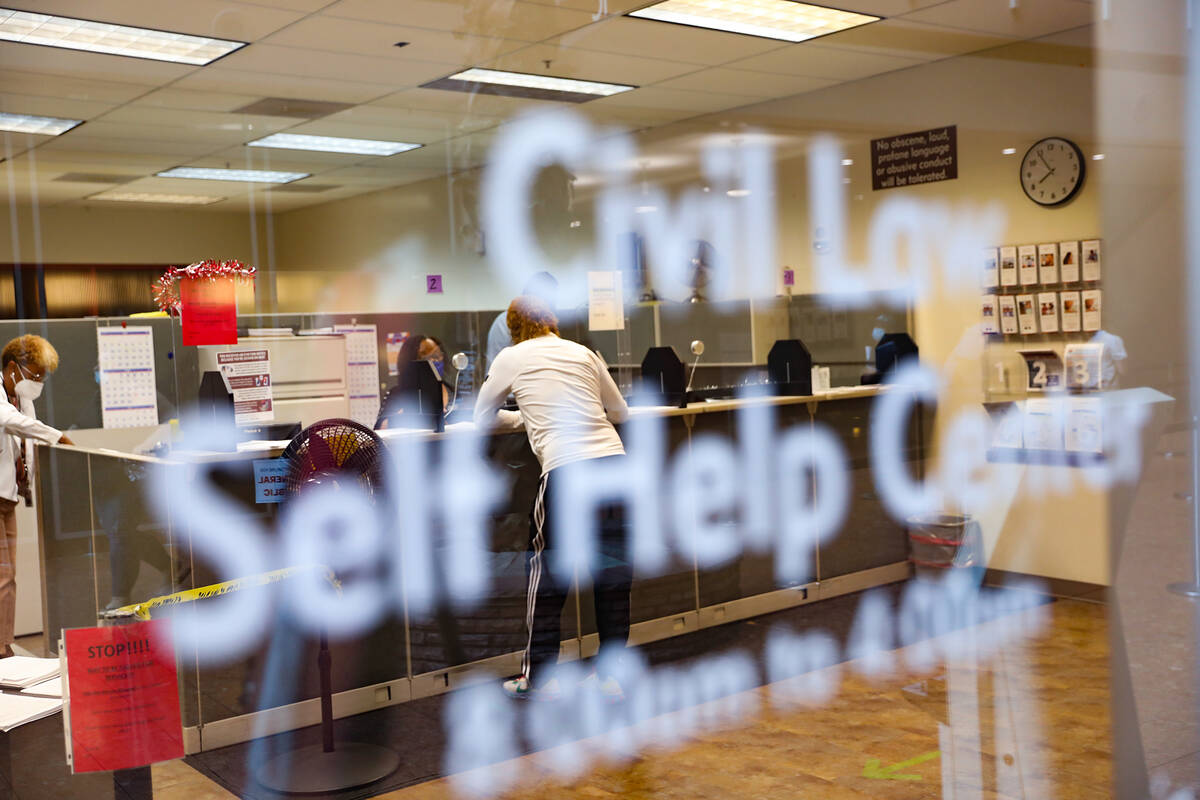 Las Vegas landlords dialed back their rent hikes last year, as a broad slowdown in the housing market gave tenants some relief.

But renters are still paying much more for housing than they were a few years ago, and eviction filings have pushed higher, stirring legal aid groups to seek more safeguards.

Jonathan Norman, policy director for the Nevada Coalition of Legal Service Providers, recently laid out the groups’ agenda for the state’s next legislative session, which is set to start Feb. 6.

He hopes lawmakers extend “in some form” a law that pauses eviction proceedings if the tenant is already applying for rental aid, saying it would allow for social services officials to intervene earlier in a case.

Norman also said Nevada should switch to a “more normalized” eviction procedure that doesn’t put the onus on renters to file with the court first in an eviction case; allow only one application fee per unit at a time, to stop any “unscrupulous” landlords from making additional money that way; and give evicted tenants more time before they have to leave.

The advocacy push comes as a key source of pandemic-era rental help ends in Southern Nevada and as thousands of eviction filings get logged each month.

Norman outlined the agenda Tuesday during a briefing held by the Legal Aid Center of Southern Nevada, which said in a news release ahead of the event that tens of thousands of Clark County households are struggling to pay rent.

“Our eviction crisis is in a new phase and is not ending,” Legal Aid Center Executive Director Barbara Buckley said at the gathering.

Norman said that under Nevada’s summary eviction process, tenants are given notice to pay or quit. They can either catch up on their rent, move out, or file an answer in court, he said.

In every other jurisdiction he is aware of, landlords are first to file a complaint. The tenant then has an opportunity to respond, and a court date is scheduled.

Nevada’s process is “very confusing for tenants,” who often don’t realize something is happening until they get a constable’s notice that they’re going to be locked out, he indicated.

“There is very little that can be done at that point,” Norman said.

Clark County saw an average of 4,720 eviction filings per month last year through November, up from an average of 3,171 per month in 2021, according to the Eviction Lab at Princeton University.

The recent volume of filings is also surpassing pre-pandemic levels.

In October, for instance, there were just over 4,930 eviction filings locally, up almost 55 percent from the October average seen from 2016 to 2019, Eviction Lab reported.

Jacob Haas, a research specialist with Eviction Lab, told the Review-Journal this past fall that it’s his understanding Nevada’s eviction process can be “fairly swift” and puts the onus on tenants to respond.

That, he added, “can cause all kinds of issues.”

A key source of rental help is also about to expire. Launched in response to the pandemic, Clark County’s emergency rental aid program no longer will accept applications starting Monday.

The Cares Housing Assistance Program allocated some $375 million in rental aid to 70,000-plus households and utility assistance to 60,000 households, the county said in a news release.

CHAP will “transition into new assistance programs” to help Southern Nevadans facing eviction for nonpayment of rent, the release added.

Tim Burch, the county’s administrator of human services, said at Tuesday’s event that CHAP is focusing on people with fixed incomes.

Under the new requirements, applicants must have received an eviction notice to qualify for the program, said Burch, who added that officials are trying to intervene “right at the point of the most need” to help people stay in their homes.

As Norman sees it, eligibility criteria will be “severely” restricted.

“That’s a much more limited group of people who are going to be eligible for assistance,” he said.

Rents cool off after price surge

Last month, the typical rent in the Las Vegas area was $1,800, down almost 1 percent from a year earlier, according to listing site Zillow.

But this followed a stretch of heated rent growth that sparked concerns over tenants’ ability to keep up with rising home prices.

Las Vegas’ typical rent in December 2021 was up 25 percent from a year earlier. As recently as this past May, rents were up 19.5 percent year over year, Zillow reported.

Before the now-monthslong housing slowdown, a combination of fierce demand, tight supply and rapid price increases for buyers and renters alike made it more difficult and more expensive to land a place to live in the Las Vegas Valley.

At an affordable housing event in April, Congressman Steven Horsford, D-Nev., pointed to Las Vegas’ “astounding” rent hikes and said too many people were left “wondering what will happen if they can no longer afford these rapidly escalating rents.”

Buckley, of the Legal Aid Center, said Tuesday that her group figured when jobs came back from the pandemic’s economic devastation, the eviction crisis would ease.

“But we didn’t anticipate the unparalleled rent increases that we’re facing,” she said.