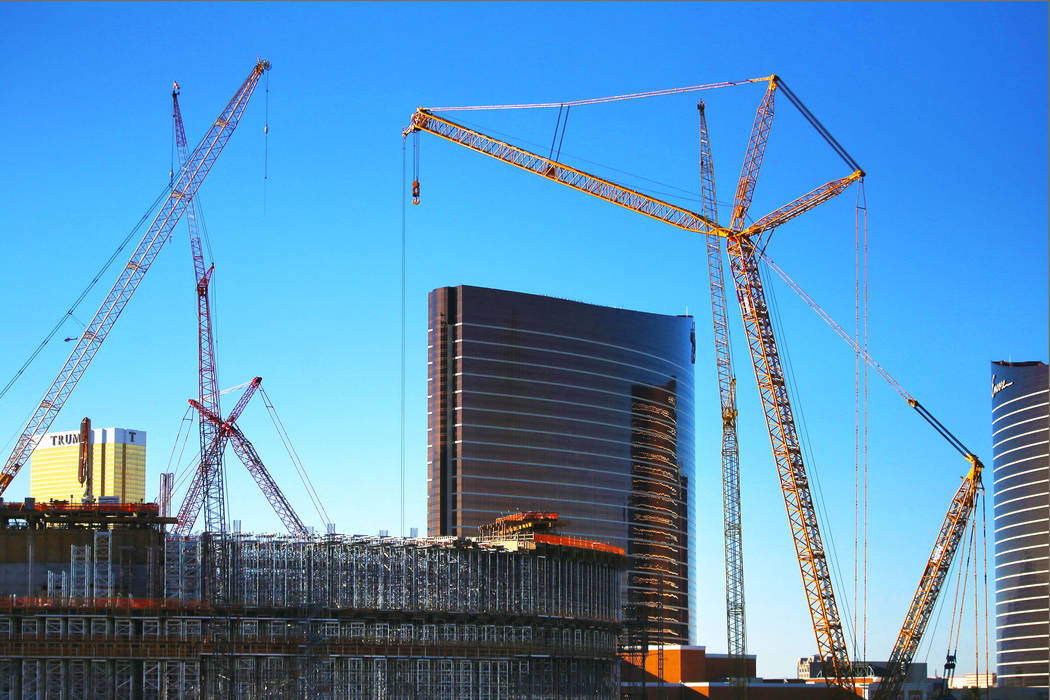 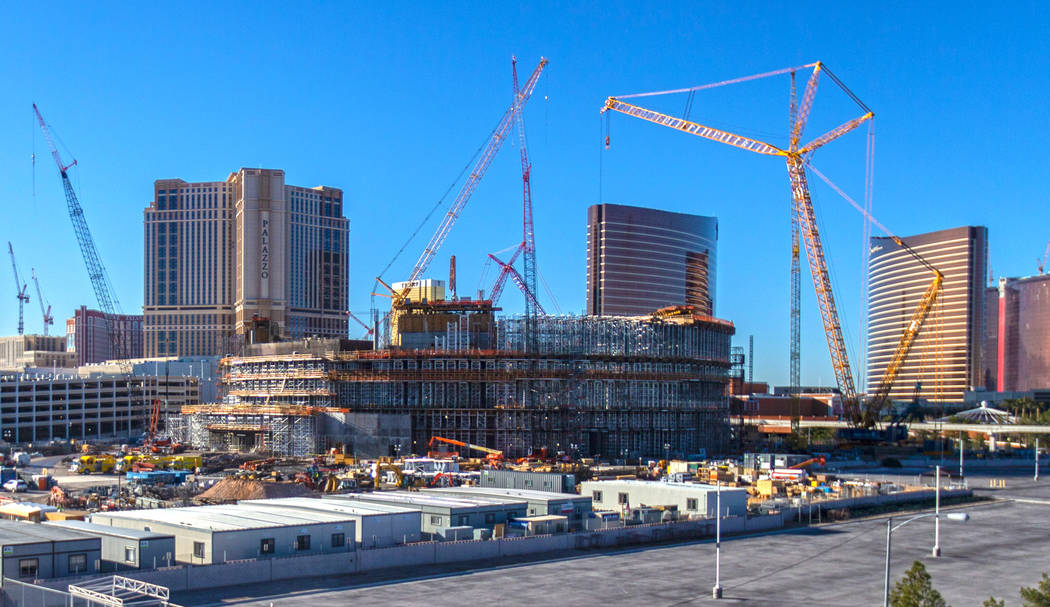 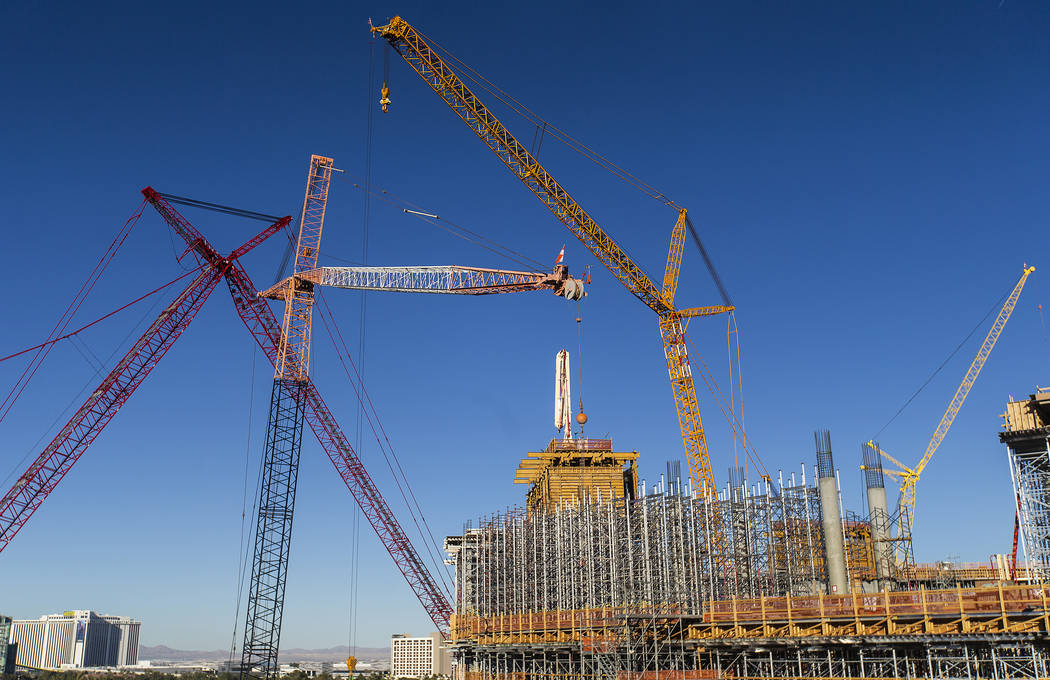 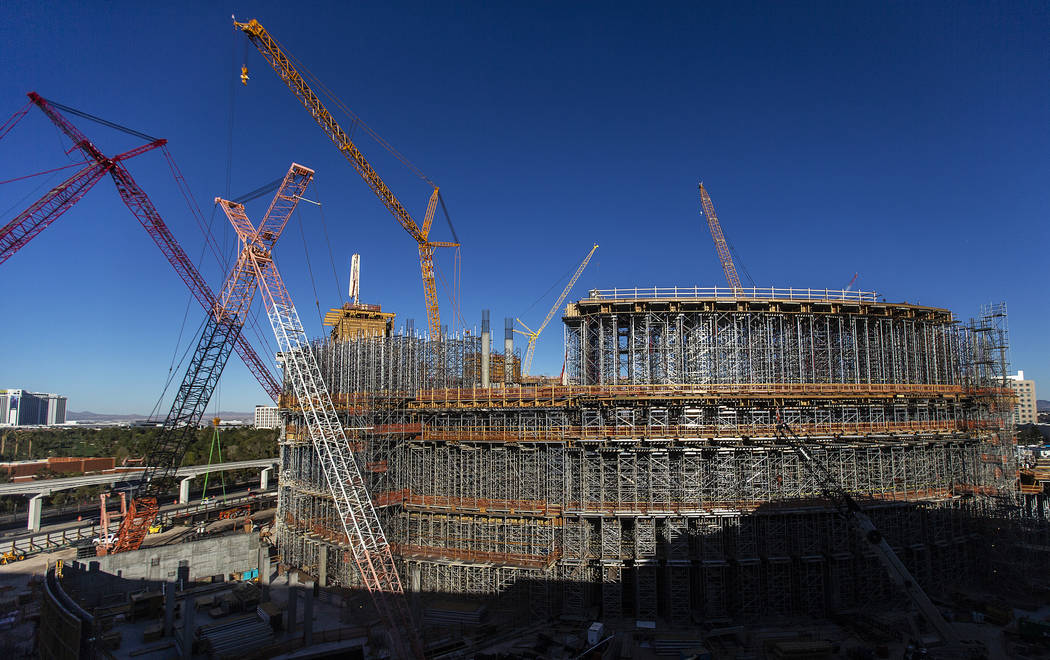 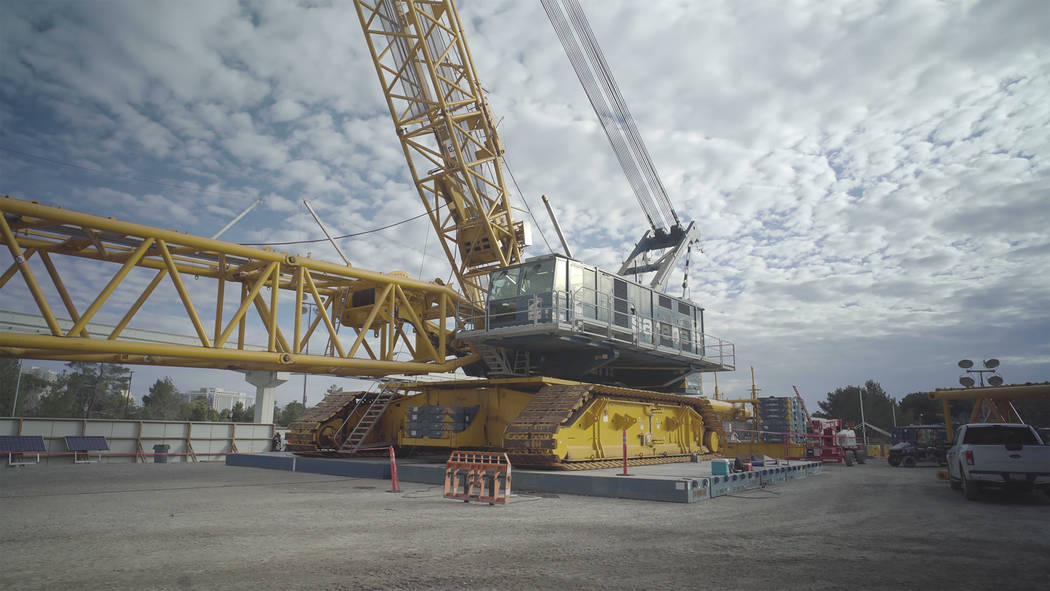 Weighing 869 tons, the DEMAG CC-8800 sits on top of specially designed steel mats because the ground is too soft to support its operation. (The Madison Square Garden Company) 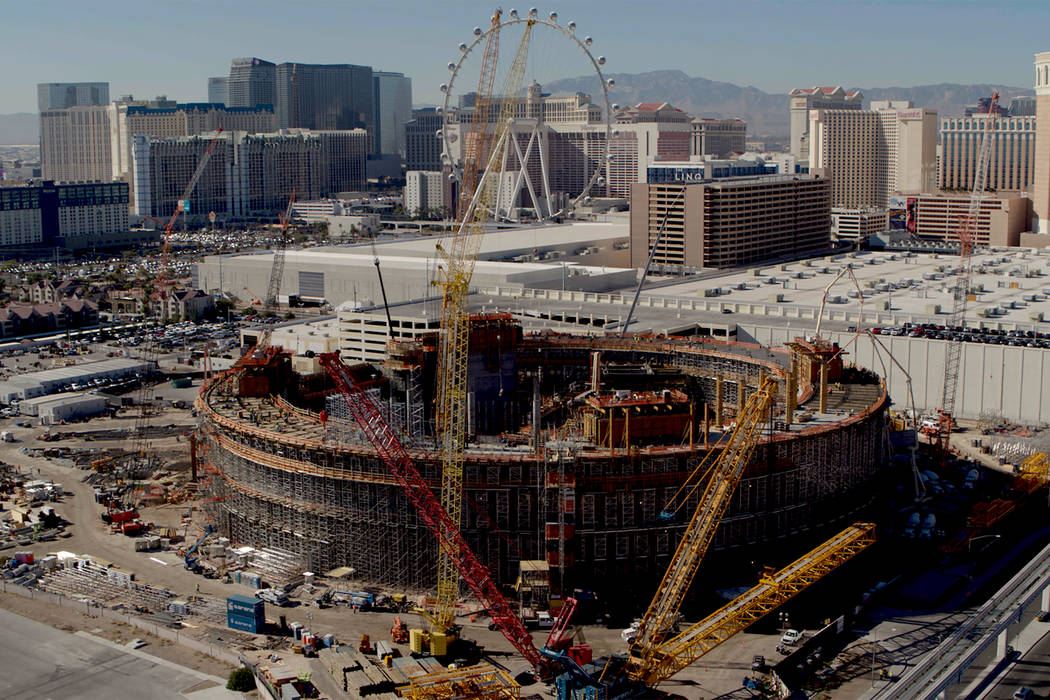 A special crane with a lifting capacity of 350 tons, greater than any other crane on the MSG Spere site, was comissioned to help assemble the DEMAG CC-8800, which took 18 days from start to finish. (The Madison Square Garden Company) 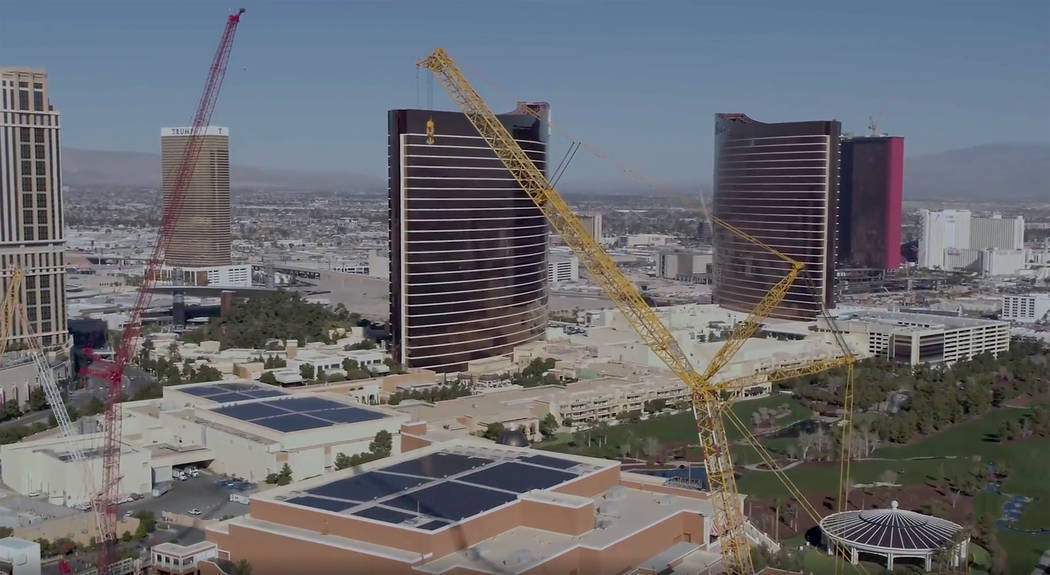 The DEMAG CC-8800, the fourth-largest crawler crane in the world, now is operating on the MSG Sphere construction site. Towering 580 feet in the air, the crane is 30 feet taller than the High Roller. (The Madison Square Garden Company)

The world’s fourth-largest crawler crane has arrived to begin work on the MSG Sphere at The Venetian.

The crane, the DEMAG CC-8800, can extend 580 feet high, 30 feet taller than the nearby High Roller observation wheel, and weighs 869 tons.

The crane is mounted on 50-by-6½-foot tracks and has been placed on the northeast side of the construction site.

The 17,000-seat, $1.66 billion MSG Sphere is a first-of-its-kind performance venue being developed by The Madison Square Garden Company. It’s being built east of the Sands Expo and Convention Center at The Venetian and is expected to open in 2021.

The crane arrived in Las Vegas from Zeebrugge, Belgium, after a trip across the Atlantic Ocean and through the Panama Canal to Port Hueneme, California. It then took 120 tractor-trailers to deliver the crane to Las Vegas, where a separate special crane was commissioned to assemble the CC-8800 in 18 days.

The CC-8800 can rotate 360 degrees, which will enable it to reach the top of the 366-foot MSG Sphere and along the 516-foot width of the planned performance venue.

The crane has the capacity to lift up to 1,760 tons. The heaviest lift on the project will be the center compression ring for the domed roof weighing 182 tons.

The fully assembled crane, including the body, boom and cables, weighs 869 tons, and 850 tons of counterweight have been added for stability.

The ground beneath the crane track is too soft to support its operation, so a track designed of steel mats sitting atop a half-acre custom composite soil pad has been installed for the crane to move.

The Madison Square Garden Company expects the MSG Sphere at The Venetian will be the most utilized performance venue in its portfolio. The company plans a strong focus on its attractions business, driving utilization of the building with multiple shows each day. MSG is expected to have corporate events because of its proximity to the Sands Expo and it also plans concert residencies.

A signature feature of the venue — besides its spherical shape — will be its massive video screens inside and out.

Inside, the display plane, the largest and highest resolution LED display plane on Earth — roughly the size of three football fields — will wrap up, over and behind the stage and audience.

Using a technique called “beamforming,” sound can be directed with laser-sharp precision, thanks to thousands of tiny speakers embedded in the building’s walls.

Outside, the venue can offer many different types of images, including a depiction of the Earth and a “see-through” mode that would make the building appear invisible.

“MSG Sphere at The Venetian will be unlike any venue ever created, including its vision for reinventing entertainment — and how it’s constructed,” Nick Tomasino, vice president of construction for The Madison Square Garden Company, said in a release issued Wednesday by the company.

“Even the scale of the equipment needed for construction is unique, and the DEMAG CC-8800 — towering nearly 600 feet in the air and visible from miles away — is a perfect example,” Tomasino said.

“This specialty crane allows us to execute the complexities that come with building the largest spherical structure in the world, safely performing lifts that require an incredible amount of expertise and precision.”

Tomasino was not available to discuss progress on the project.