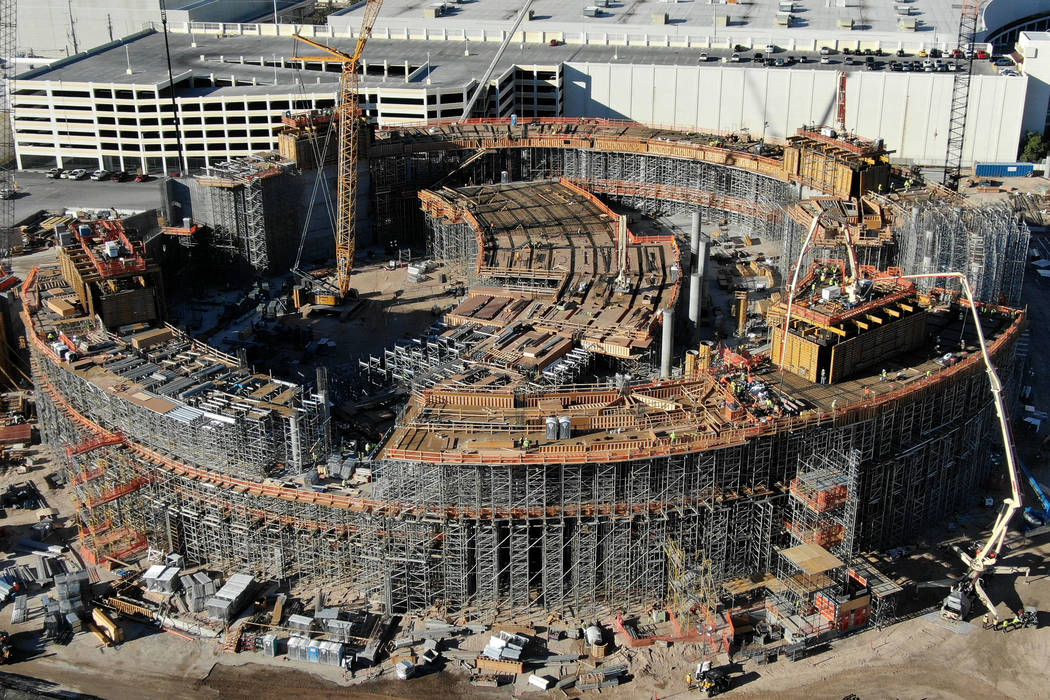 An aerial view of the Madison Square Garden Sphere under construction next to the Sands Expo Convention Center on Tuesday, Dec. 17, 2019. (Michael Quine/Las Vegas Review-Journal) @Vegas88s 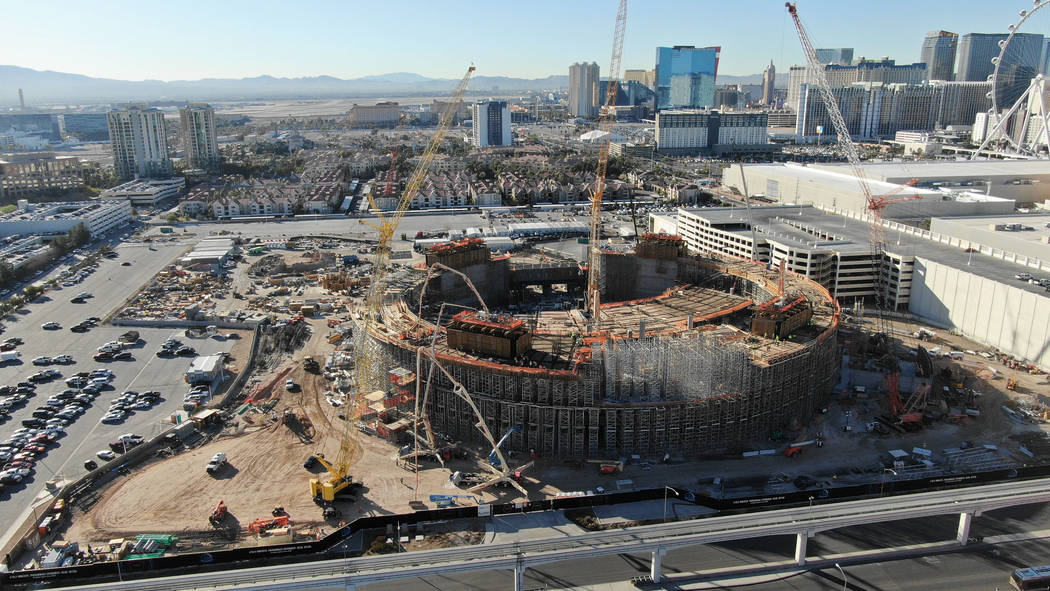 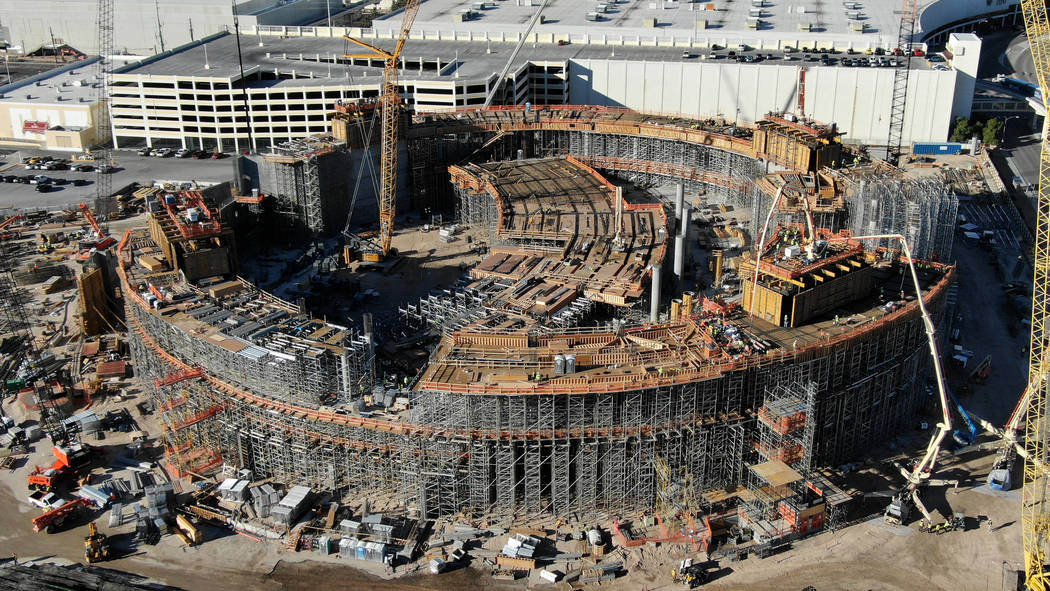 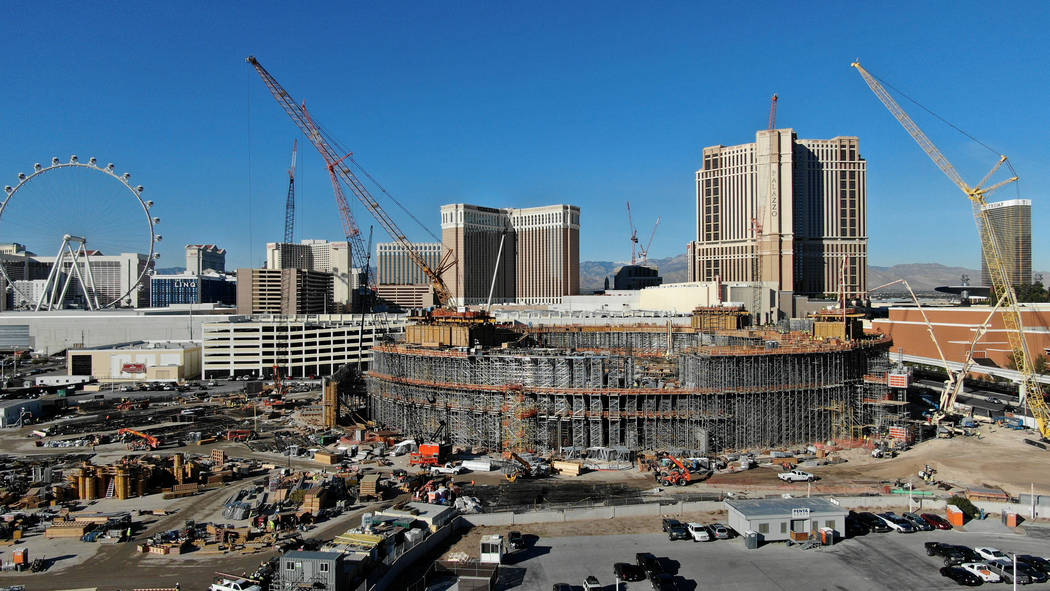 The stage is set — literally — at the MSG Sphere at The Venetian.

Workers on the entertainment venue project just east of the Sands Expo and Convention Center have poured the concrete foundation for a 4,000-square-foot stage that is clearly visible in photos captured by a camera mounted on a drone.

Concrete work also has been completed on a second-floor atrium area.

When completed in 2021, the MSG Sphere will be the largest spherical building in the world at 875,000 square feet.

“MSG Sphere is an engineering marvel that will change the face of entertainment right here in Las Vegas,” said Nick Tomasino, vice president of construction for The Madison Square Garden Company.

Tomasino covered some of the highlights of the first year of construction, dominated by completing grading and excavation and pouring extensive amounts of cast-in-place concrete and laying rebar. Below-grade mechanical, electrical and plumbing work have been completed in the building’s basement.

The structure has reached the fourth of eight levels and rises 65 feet above ground level. When complete, the building will be 366 feet tall, about 276 feet shy of the nearby Palazzo tower.

Workers have poured 4½ Olympic swimming pools’ worth of cement while laying more than 7,300 tons of rebar.

As the building rises, new details about the venue are emerging.

Planners say the MSG Sphere will feature seven seating levels with about 17,500 seats and a maximum capacity of just over 20,000 when there is a mix of seating and standing.

“From the venue’s iconic spherical shape, the stage, seating and even the remarkable atrium, it’s easy to see the considerable progress we’ve made this year,” Tomasino said.

One of the next milestones will occur next year when the building reaches Level 6 at 108 feet above ground level. That’s where the diameter will reach its widest point — the 516-foo “equator.”

Tomasino said structural steel will begin to be put in place, and the steel geodesic sphere wrapping around the building’s exterior, which will support the fully programmable LED display, will start to take shape. Interior and infrastructure work also will begin.

The venue’s backers are promising a fully immersive experience on a large scale. Inside, guests will be surrounded by the largest and highest-resolution LED screen on Earth. More than 160,000 square feet of display surface — equal to three football fields — will wrap up, over and behind the stage and audience, delivering a totally immersive visual environment at a resolution 100 times better than today’s high-definition televisions.

Tomasino said more than 800 tradesmen are working on-site every day. That number will grow to about 1,500 when construction reaches its peak in the next year and a half.

The building is being designed as an entertainment and performance venue, but it also will be available for business presentations affiliated with the Sands Expo and Convention Center, which will be attached to the sphere by bridge. A new Las Vegas Monorail stop near Sands Avenue and Koval Lane is planned for the sphere.

Every guest will hear crystal-clear audio with an advanced acoustics system that features beamforming technology, enabling audio to be directed to specific locations in the bowl at a volume that remains constant, from the point of origin to the destination. This technology also enables multiple forms of content to be delivered simultaneously, which means two people sitting 5 feet apart could hear completely different sounds, adding to the possibility for a customized experience. In the business presentation environment, that means soundtracks in different languages for the same presentation can be beamed to specific areas without headphones.

An infrasound haptic system will use deep vibrations so guests can “feel” an experience, whether it’s an erupting volcano or a passing motorcycle.

The MSG Sphere at The Venetian also will ignite the sense of smell through evocative scents designed to transport audiences.

Additionally, the venue will introduce a new architecture for connectivity that will deliver 25 megabits per second for every guest, enabling a broader range of content and greater interaction.