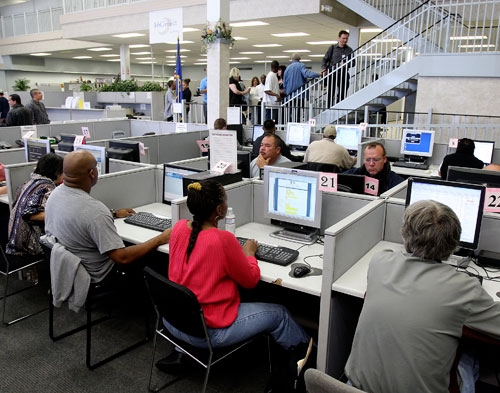 A new report shows increasing numbers of Nevadans have given up on the state’s job market.

The state Department of Employment, Training and Rehabilitation reported Monday that tens of thousands of residents have abandoned the Silver State’s work force, either moving to other markets or staying put but quitting their job search.

And that shrinking labor pool has important implications: Joblessness in October eased off its record September levels, going from 14.4 percent to 14.2 percent statewide. But fewer workers could mean continued pain in the state’s housing markets.

First, consider just how much the state’s work force has fallen off in recent months.

The year-over-year difference in October was even more stark, as nearly 50,000 residents, or 3.6 percent of the state’s labor pool, abandoned the job market.

Here’s the upside to those numbers: As laborers either leave Nevada or stay here but drop out of the job hunt, the state’s nation-leading unemployment rate should drop. That was the case last month, as joblessness in Las Vegas fell from a record 15 percent in September to 14.1 percent in October. Nevada’s unemployment rate dipped 0.2 percent in the same period.

The last time the state’s jobless rate declined was in December 2005, when it slipped to a low of 4.2 percent.

Taken with improvements in visitor volumes and taxable sales, October’s lower unemployment rate could help reinforce the idea that Nevada’s economy is beginning to recover, said economist Steve Brown, director of the Center for Business and Economic Research at the University of Nevada, Las Vegas.

Added Bill Anderson, chief economist for the employment department: "This is a clear sign that the recession’s grip on Nevada may finally be loosening."

But there’s plenty of downside to a dwindling labor force, experts said.

For one thing, discouraged workers who end their job search but stick around often consume more social services. And residents who decamp for states with better job markets take their buying power with them. The upshot? A needier population base combined with fewer taxpayers to help meet the demand for public services, said Brian Gordon, a principal in local research and consulting firm Applied Analysis.

What is more, Nevada’s economy, with its heavy reliance on construction and cyclical hotel-casino turnovers, has traditionally been geared toward growth, Gordon said.

"We haven’t historically seen our population base shrink, and we haven’t seen our employment market contract before. This creates a dangerous situation not only for our economy, but for the fiscal structure of the state," Gordon said.

"While this phenomenon (of a smaller labor force) should result in an improving unemployment rate, it is also likely to prolong the housing crisis in Nevada, and particularly in Las Vegas, as even more homes become part of the available for-sale inventory," likely via foreclosure or short sales, Lerner wrote in a Monday note to investors.

So just how bad will Nevada’s labor-force shrinkage get? Observers say the job market here probably won’t give workers reason in coming months to stick around.

Sure, the state’s total nonfarm employment grew by 3,100 jobs in October, including 2,200 seasonal government positions and 400 construction jobs. The retail sector also added 600 jobs from September to October as holiday hiring picked up, Anderson noted.

Some major projects on the horizon will generate jobs. The Cosmopolitan Las Vegas on the Strip is hiring 5,000 workers for its December opening. NV Energy’s One Nevada transmission line, which will run from Apex to Ely, will generate 400 construction jobs when work starts in earnest in 2011.

But the leisure and hospitality sector shed 1,000 jobs in the month following the end of the summer-travel season, and the Christmas retail boost is roughly 10 percent of the 5,000 jobs the state usually added from September to October in better times.

Overall, the number of jobs in the state was down nearly 28,000 positions year over year in October. Plus, with 181,600 people unemployed statewide, including 135,000 in Las Vegas, those pending projects will struggle to make even a small dent in Nevada’s employment market.

Combine all those factors, and state employment officials say they don’t expect joblessness here to decline substantially in the year ahead. They forecast a 2011 joblessness average similar to 2010’s 13.9 percent.

"The fact that our unemployment rate declined is certainly good news, but I think you have to put it in perspective because there are still a lot of negatives out there," Anderson said. "It’s not as if we have moved into positive job-creation territory."

Nevada’s employment climate is likely to remain challenging for job-seekers for several quarters to come, Gordon said. As locals struggle to find work, many of them either will migrate back to their home states or simply stay here but surrender the job hunt.

Still, whatever the reason, experts agreed the worst of Nevada’s unemployment spikes are likely behind it.

The employment department will wait to see another month of data before its officials declare October’s jobless decline real, Anderson said.

Nationally, the October jobless rate was 9.6 percent. It was 12.4 percent in California. Nevada has led the nation in unemployment since May, though not all states have reported their October numbers yet.

The employment department collects its jobless data from household and business surveys.

Recent figures from the U.S. Bureau of Labor Statistics show that Nevada’s real unemployment, which includes discouraged workers who have stopped hunting for jobs and underemployed part-timers who would rather have full-time positions, is more than 22 percent.