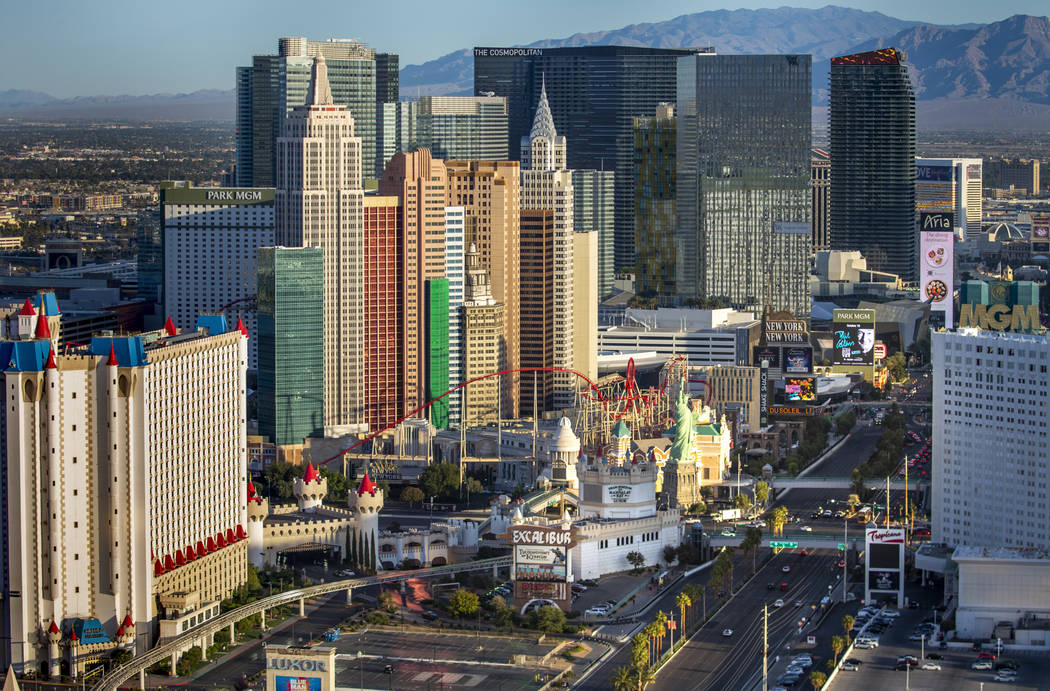 The Excalibur, New York-New York and other properties about the Las Vegas Strip during an aerial photo on Wednesday, Oct. 16, 2019, in Las Vegas. (L.E. Baskow/Las Vegas Review-Journal) @Left_Eye_Images

Las Vegas’ new slogan will replace the famous “What happens here, stays here,” people familiar with the matter confirmed, and will launch Sunday night during the Grammys.

Billy Vassiliadis, CEO of R&R Partners marketing firm, advertising consultant to the Las Vegas Convention and Visitors Authority, did not confirm the new language but said, “We sort of feel we bridged the (‘What happens here, stays here’) icon to today. We kept the essence of it.”

The city is getting ready to launch the new slogan Vegas-style, with plenty of bright lights and celebrity appearances.

Starting at 6 p.m., marquees up and down the Strip are set to light up with the city’s new phrase for roughly an hour.

What do you think of Las Vegas' new slogan? It is expected to be "What happens here, only happens here."

“It’s a tip of the hat to all the residencies that are here, which has become a really cool new thing,” Vassiliadis said.

The advertisement is set to run until the end of March, and a second commercial will follow that challenges viewers to make a trip to Vegas.

“It was a matter of driving impulse decision making,” Vassiliadis said.

The firm is hoping the Grammy launch gets people talking about the new slogan both on and offline, with a hashtag being pushed as part of the campaign.

According to R&R, about 81 percent of Twitter users are on the platform while watching award shows. About 8.7 million tweets are sent during the Grammys, well above the roughly 5.7 million sent during the Oscars.

Vassiliadis said the social media aspect is set to be a large part of this campaign.

“You don’t launch (campaigns) the way you used to,” Vassiliadis said. “It’s not about the brand offering itself up on a TV commercial. The audiences want to be the ones that push things out, that own it, that influence their peers.”

To that end, Instagram traps will be set up across the Strip, Fremont Street and McCarran International Airport, urging visitors to snap and share a photo of themselves with art installations that have the slogan plastered across their exterior.

Those messages on social media could include a new Las Vegas hashtag that comes with a mini icon of the “Welcome to Fabulous Las Vegas” sign. The Las Vegas emoji is set to launch alongside the advertisement at the Grammys, and would make Las Vegas the second destination in the world with its own emoji, behind Tokyo.

In the long run, R&R plans to work with various partners to continue to get the word out.

The firm is looking into ways to integrate the slogan into airline experiences through partnerships with companies like Frontier and Allegiant. Another partnership with Pantone Color Institute is set to unveil a set of “Neon Vegas” colors with names based on the new slogan.

The firm also wants to integrate the phrase into special “only in Vegas” events. NFL games could be promoted with icons like the New York-New York’s Lady Liberty statue wearing eye black that showcases parts of the slogan, for example.

Vassiliadis said the new expression is more than just a TV spot and a few billboards; he and his firm want the new message to be a constant presence that’s driven by various brands and celebrities.

“It really gives us an opportunity to sync this thing into the culture, really give it roots, so it’s constantly present in some way,” he said.

The upgrade was made, in part, to help shift the mindset of a younger generation of travelers and those living nearby in areas like Southern California.

After months of research, R&R found that millennials weren’t as “energized” about Las Vegas trips as previous generations. These travelers are often attracted to competing cities that also offer gambling and diverse bar scenes.

“Anything to freshen up (the city’s messaging) is positive,” Schwartz said. “I think it definitely showcases the uniqueness of the city.”

But re-energizing the slogan was more difficult than just thinking up a new phrase from scratch, Vassiliadis said. His team wanted to find a way to build off the original slogan that had become an icon for the city.

“It was iconic, it was cultural … there was a feeling of connectivity,” he said. “So we couldn’t walk away from it, but we had to contextualize it.”

Some, like Schwartz, worry that the city and its visitors will have a hard time letting go of the previous slogan.

“It’s so wired into the city. I don’t think people are going to stop saying it,” he said.

Vassiliadis said the new phrase’s message of adult freedom in Las Vegas is consistent with the previous one. Only this time, it’s up to the visitor to decide whether they want to keep it to themselves.

“I’m sure we’ll have critics coming out of the woodwork,” Vassiliadis said. “But all the critics that we had in 2003 that we thought the (‘What happens here, stays here’) saying was the end of Las Vegas … this will be a lot less controversial than that one, trust me.”